posted 3 months ago
Since this series of small posts has been helping a lot of people (and giving me ideas for new things to try as well) I thought it was time for another. Today, I want to go with carrots. Which ones are your favorites and what is it about them that is driving you to decide as much? For myself, I am going to have 2 to offer up, each for very different reasons. I'll say in advance that I've not had a ton of success with carrot in general. The reasons can vary, but I will get into that a bit more as I describe each variety.

For Flavor:
Purple Dragon - I've never had a lot of success with the germination rate on these. The first year I grew them, I did them in pots and only managed to get 3 total. In the other years I grew them, my success rate was only marginally better. The obvious question then is why would I keep growing something that has never germinated well for me? Flavor! While I tried them initially because I liked the purple exterior around an orange core, I wasn't prepared for how complex the flavor would be. Even in inferior soil, I harvested carrots that can only be described as 'spiced' in flavor. It's hard to put a finger on, but add a little spice-infused honey and some butter after cooking and you have a dish that is elevated well beyond the average carrot. It doesn't hurt just how beautiful they are on a plate either. One of these days I will figure out how to get more consistent germination out of them and then all bets will be off for how many rows/clusters I may grow. General Use:
OxHeart - While I don't think they are anything special in flavor, they taste like an average carrot to me. The benefits of these is how they seem able to grow just about anywhere. The stocky roots don't need deep soil to prosper and they seem able to muscle through most soils. I think they'll be especially good for helping to break in a new garden for those who don't wish to till or otherwise disturb the soil since they can break up hard earth on their own and don't need much digging to remove. While I haven't done so, I think it might be interesting to make thin slices to pickle, making each a 'sandwich slice' unto itself. Where the dragon carrots are my flavor pick, these are the work horse pick for getting food on the table. 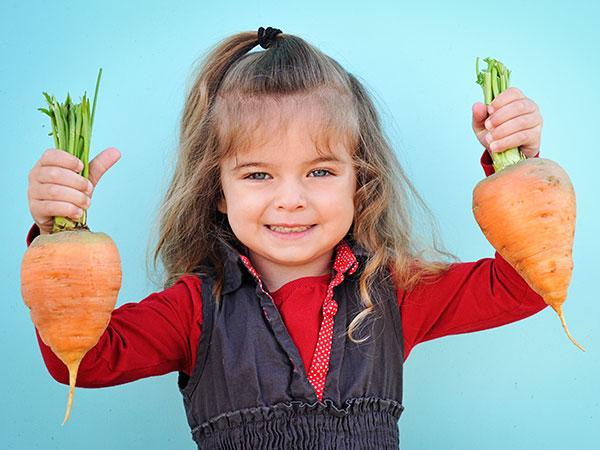 Debbie Ann
Posts: 9
Location: Sedona Az Zone 8b
4
posted 3 months ago
Hi, Been gardening for 10 years now, still a beginner. All heirloom because they taste so much better! I have been growing 4 colors each year. Purple, yellow, orange and red. Mostly because they look so darned pretty mixed together on my plate. Reminds me of a bowl of Trix cereal but so much healthier! I've been growing Purple Dragon for 8 years because they grow so super sweet in my dirt. And Atomic Red are really pretty and taste good. Tried several orange but haven't found anything really special yet. 8 years ago I planted yellow 'Lobbericher carrots'. They were just as good and sweet as the Purple Dragon.

Each year I sow a little bit more of one of them so I can leave about a dozen in the ground till next year and collect the seeds. My seed easily lasts for 4 years in my fridge. It's too bad that I never got the chance to save some of the Lobbericher because I haven't been able to find it since then. I've tried other yellows but they aren't as good.

Didn't get any carrots last summer or beans for that matter. I saw them all coming up. I love when that happens. Like Christmas day and my birthday wrapped into one. A few days later they were gone. I sowed some more and the same thing happened. Finally realized that I had a lot more grasshoppers in my yard, more than usual. They didn't bother any of the other seedlings enough to cause much trouble but they didn't leave me any carrots or beans and then they moved on by the start of summer.

This spring I'll watch for them. I have a lot of old screen material. I used to work at a hardware store where they re-screened windows and screen doors. They tossed the old ones in the trash and I pulled lots of them out of the dumpster. If the grasshoppers return I'll try gently laying the screen materials over the beds. They should be light enough not to inhibit the seedlings. That might keep the grasshoppers out till they move on but still let in light and water.

Why was the snowman looking through a bag of carrots?    He was picking his nose! Best wishes.
Nicole Alderman
master steward

posted 3 months ago
My favorite are the short-season carrots (usually called "nantes-type" carrots). Since we're northfacing, and at a higher elevation, and surrounded by trees, I find it really helps to have fast-growing carrots...otherwise they just don't gain any size before they lose sunlight!

Territorial Seeds wrote:56 days. If you appreciate fresh carrots, you must try this one! Crisp, yet very easy to munch. So brittle and delicate, in fact, that it has to be hand dug, as it cannot withstand mechanical harvesting. Enjoy Mokum as a baby carrot or as a full-size 6-8 inch tasty treat. Very rich in vitamin A and high in sugars. Striking orange roots with contrasting thick dark green tops. It's still the finest fresh-eating carrot we know. Nantes type. MA. IR: Ad, Ar, P.

Though, I gotta say, the most delicious carrot I ever had was one from Joseph Lofthouse's carrot seeds.

Lofthouse Seeds wrote:I choose carrots that grow well in my low-humidity sun-drenched high-elevation cool-nighted garden. Due to heavy limestone-derived lake-bottom soil I select mostly for Dantes and half-Nantes types which can be harvested whole without breaking, and generally grow without lots of knobs and multiple tap-roots. I select stress tolerant biennial plants to produce the seed crop.

Here's my son with the carrot he grew! This carrot was super delicious, and we enjoyed every single bite! 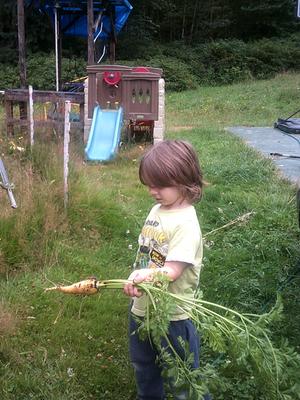 Debbie Ann wrote:It's too bad that I never got the chance to save some of the Lobbericher because I haven't been able to find it since then. I've tried other yellows but they aren't as good.

This might make your day. Here's to hoping!
Loberricher carrots

Krystal Comerford
Posts: 14
Location: British Columbia zone 9a
3
I like...

posted 3 months ago
Definitely Cosmic Purple. In late July I sowed some 5 year old seeds under my succession crop of lettuce with very low expectations. The tops did not grow much but in December I pulled one and was surprised to have a beautiful, good sized carrot! The flavour was outstanding and the texture was perfect. In my heavy clay soil they were a bit short but perfectly straight.
Melonie Corder
Posts: 101
Location: Far Northern California Coast, Far South Pacific Northwest
20
I like...

posted 3 months ago
Purple Dragon tops my list by far for both beauty and flavor, followed by Little Finger for quick growth and great flavor/snap. I've never tried Scarlet Nantes but have some seeds out there now.

Debbie Ann
Posts: 9
Location: Sedona Az Zone 8b
4
posted 3 months ago
Thank you for the great suggestions! And I just ordered my loeberricher carrots. You are awesome!
What's invisible and smells like carrots? ......Bunny farts. Best wishes everyone.