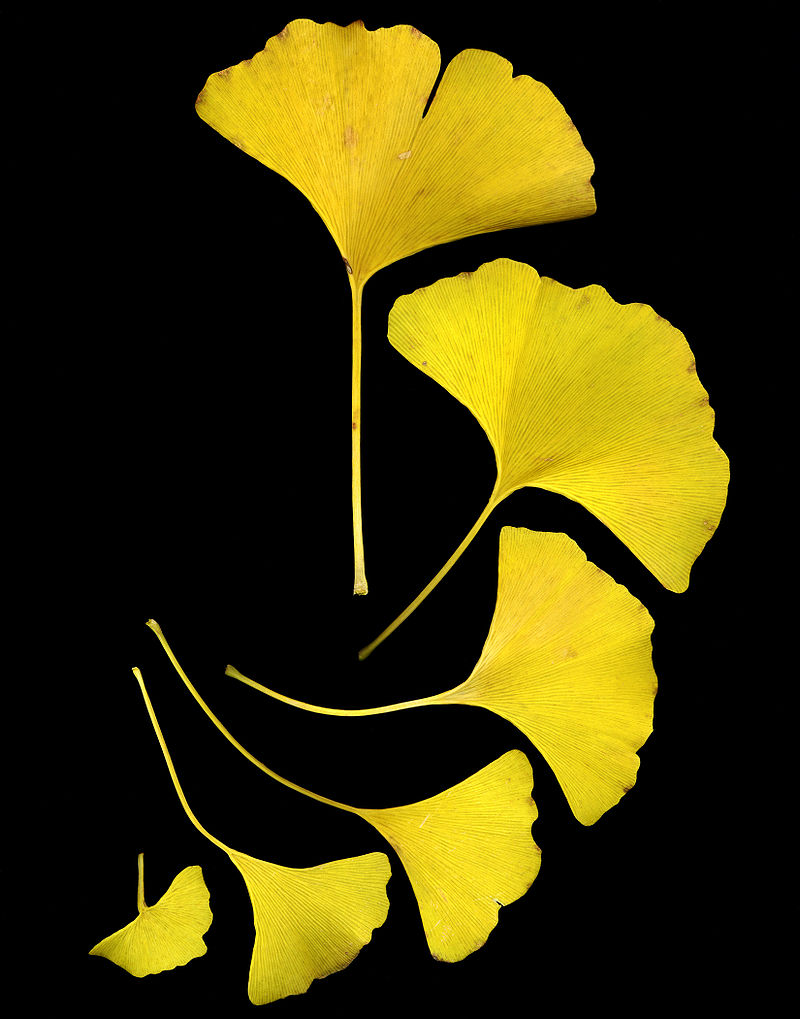 Here is a bit of trivia:  What medicinal herb is among the oldest plants on earth, a living fossil?  The answer is Ginkgo.  Also known as the Maidenhair tree, the Ginkgo as we know it is the last of its kind, the Ginkgophyta.  Due to that fact, it is also perhaps the most easy plant to identify botanically - there is only one.  Fossils of the Ginkgo date back more than 200 million years!  Believed to have originated in China, Ginkgo is also one of the oldest plants known to be cultivated by man.  Ginkgo’s use as food (the seeds) medicine and as a beautiful ornamental plant is likely as old as human history.  However, its current use is relatively modern.


These days, Ginkgo is known as an excellent herbal remedy for memory and concentration.  The leaves increase blood circulation to the brain.  But, according to the late herbalist, Michael Moore, this treatment only became effective with the advent of Standardized Extracts.  He said that a tincture of the leaves causes headaches - some disagree.  Regardless, the Standardized Extract has become the most common usage.  He said that Ginkgo Also helps with cochlear deafness and macular degeneration.


Plants For a Future lists Ginkgo as:

Maidenhair Tree: Ginkgo has a long history of medicinal use in traditional Chinese medicine, where the seed is most commonly used. These uses are mentioned in more detail later. Recent research into the plant has discovered a range of medicinally active compounds in the leaves and this has excited a lot of interest in the health-promoting potential of the plant. In particular, the leaves stimulate the blood circulation and have a tonic effect on the brain, reducing lethargy, improving memory and giving an improved sense of well-being. They have also been shown to be effective in improving peripheral arterial circulation and in treating hearing disorders such as tinnitus where these result from poor circulation or damage by free radicals. The leaves contain ginkgolides, these are compounds that are unknown in any other plant species. Ginkgolides inhibit allergic responses and so are of use in treating disorders such as asthma. Eye disorders and senility have also responded to treatment. The leaves are best harvested in the late summer or early autumn just before they begin to change colour. They are dried for later use. The fruit is antibacterial, antifungal, astringent, cancer, digestive, expectorant, sedative, vermifuge. The fruit is macerated in vegetable oil for 100 days and then the pulp is used in the treatment of pulmonary tuberculosis, asthma, bronchitis etc. (This report might be referring to the seed rather than the fleshy fruit). The cooked seed is antitussive, astringent and sedative. It is used in the treatment of asthma, coughs with thick phlegm and urinary incontinence. The raw seed is said to have anticancer activity and also to be antivinous. It should be used with caution, however, due to reports of toxicity. The cooked seeds stabilize spermatogenesis.


According to A Handbook of Chinese Healing Herbs, by Daniel Reed, the root has standard use in Traditional Chinese Medicine:  He lists the qualities as neutral in energy, sweet in flavor, with an affinity for the kidneys.  “Effects, tonic; astringent”... and particularly good for preventing “nocturnal emissions”... something with which traditional Taoist and Buddhist practitioners of the meditative internal and martial arts are generally concerned.  He states that, “unlike the kernels, the root of the Ginkgo tree is nontoxic and can be used for prolonged periods without harmful side effects.”


Returning to western herbalism, Lesley Bremness, in The Complete Book of Herbs, states that Ginkgo “seeds, roasted or pan fried are pleasant to eat and relieve hangovers.”  Penelope Ody, in The Complete Medicinal Herbal, writes, “the tree was introduced to Europe in 1730 and became a favorite ornamental.  Since the 1980s, western medicinal interest in the plant has grown dramatically since its potent actions on the cardiovascular system were identified…. Research has shown that ginkgolide can be as effective as standard pharmaceutical drugs in treating severely irregular heartbeats.  The leaves are also used for varicose veins hemorrhoids and leg ulcers.”


I am reminded of the old herbalist concept of “The doctrine of signatures.”  This stated, in essence, that an herb’s medicinal use could be indicated by its appearance in relation to the human.  The unique leaf of the Ginko, could certainly be thought to indicate organs that form two parts, such as the lungs, kidneys or brain.  That such an ancient tree could enhance memory would also be along those lines. The golden color of the leaf in fall could even correspond to the “golden years” of the aged.  And, the Ginkgo nuts might obviously be thought to have an effect on the testicles.  I cannot say that I am a devotee of the Doctrine of Signatures school, but such parallels are certainly interesting to contemplate. Regardless, it would be well worth cultivating such a beautiful and useful tree in the herbalist’s garden.

posted 7 months ago
If anyone wants to grow this, I would point out that you need male and female plants to get seed. Most of the ones planted ornamentally are males, as the fruit tends to be stinky.

Jay Angler wrote:If anyone wants to grow this, I would point out that you need male and female plants to get seed. Most of the ones planted ornamentally are males, as the fruit tends to be stinky.


Is there any way to tell the difference? The plants isn the OP photo look very familiar; I think we may have some growing around the backyard (edge of a forest.) I know my wife told me that she thinks gingko grows around out there, but she couldn't ID it.

All that is gold does not glitter,
Not all those who wander are lost;
-J. R. R. Tolkien

Jay Angler wrote:If anyone wants to grow this, I would point out that you need male and female plants to get seed. Most of the ones planted ornamentally are males, as the fruit tends to be stinky.


Is there any way to tell the difference? The plants isn the OP photo look very familiar; I think we may have some growing around the backyard (edge of a forest.) I know my wife told me that she thinks gingko grows around out there, but she couldn't ID it.


From the Internet, "Ginkgo is technically a conifer, and the male part looks like a tiny cone right off the bat. Females send up slender green shoots along with the new leaves. They eventually produce rounded pods that look like fruits but are actually seeds".
From this site, https://www.osgf.org/blog/2017/11/7/blandy-ginkgo  if the trees are volunteers, they reproduce at about a 1:1 M/F ratio. However, if they were nursery stock, they were likely grafted or rooted from Male stock due to the stinky female seed issue. I've got one small Ginkgo that was rooted, and from the source I'm expecting it will be male, but it will take about 20 years to find out. If you're looking for the medicinal value of the leaves or roots, I don't know that it will make any difference.
I've got a Monkey Puzzle tree baby also - it's going to be a long wait before I know its sex also.