When can I plant my wormwood outside ?

I have a few wormwood plants that are getting big, but I have never cultivated them before. As I'm going to have more seeds going, I need to make space inside for the new seedlings (other plants), and so I want to put those wormwood plants outside, next to blackcurrants.

I live in a 8b zone, and everything outside is blossoming. Can I plant my wormwood into the soil now ? Here's a picture of the ladies: 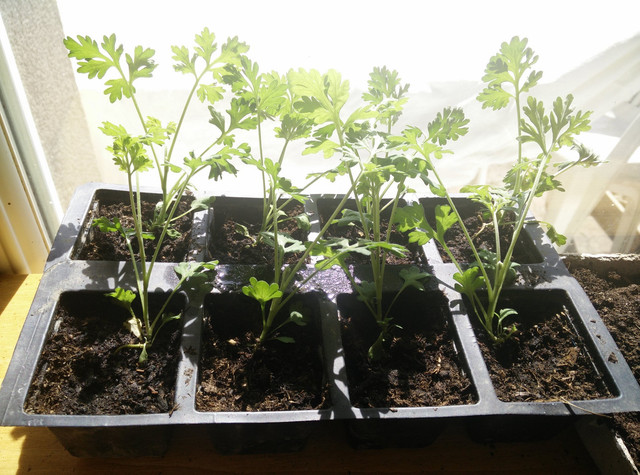 I am not sure if I can plant them outside now, as they seem to be a hardy plant, yet one website advocate putting them outside when there is no more frost. So far we're only having the occasional light frost here, it's getting warmer every day.
Judith Browning
Posts: 7938
Location: Ozarks zone 7 alluvial,black,deep clay/loam with few rocks, wonderful creek bottom!
1694
3
posted 1 month ago
I'm in zone 7 and my established area of Mugwort (Artemisia vulgaris L.) is growing like a weed

I have seed for some other Artemisias including wormwood and the packet does says to wait to set out until after spring frosts as you mention.
I'm late getting them started...yours look great!

They must be hardy once established though?

Maybe set out a few with protection...our last frost date is mid April.  Yours must be coming up soon?

Mike Lafay
Posts: 76
12
posted 1 month ago
I have another artemisia, Artemisia Annua, but this one is also still mostly inside (I've sown hundreds too much, so I left some outside to see which one would survive, mostly neglected). The artemisia outside are not growing as fast as those inside, and what kill them seem to be mostly the lack of care, lack of water or too much sun.

Obviously once they're old enough the wormwood will resist cold/frost, but as they are still young I don't know when they will be ready to resist it. I've also thought about putting a few outside and see if they fare well, however if I can avoid the sacrifice, and either keep them all or plant them all, it'd be perfect.

The picture doesn't show the other dozens of plants, as well as the hundred and so of seeds I want to plant this year. The space inside is getting tight, and as the sun is getting higher and higher, less of it gets inside... hence the need to get the ready plants out as soon as possible.

Mike Lafay
Posts: 76
12
posted 1 month ago
So I've planted them outside a few days ago, and despite a hard frost two nights ago, they seem to be holding up. I'll post more on that, but so far there's no sign of them dying because of the frost.