Is this an Alien in my Sunflower?

Kenneth Guide
Posts: 3
posted 2 months ago
I think I remember this being the result of a Virus.  Any thoughts?
Sun.jpg 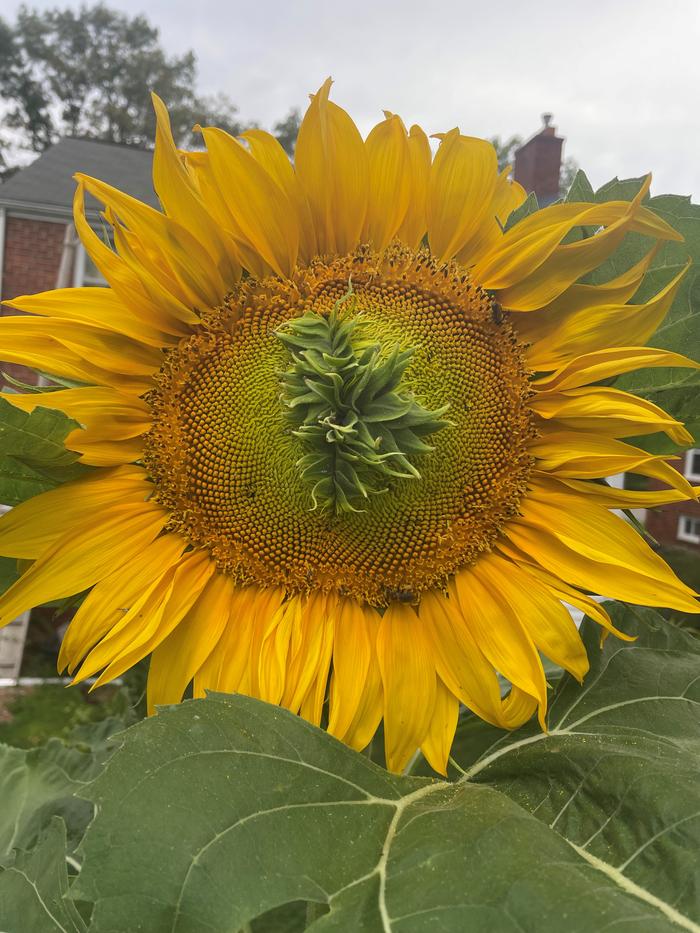 John Weiland
pollinator
Posts: 1816
Location: RRV of da Nort
357
posted 2 months ago
Re:  "Is this an Alien in my Sunflower?"


It looks like leaves or sepals growing where the flowers should be.  This might be characteristic of a 'homeotic' mutation where the cells that were supposed to give rise to flowers in that area instead, through a spontaneous mutation, progressing into a developmental program for leaves or sepals.  This event would have happened quite early when the flower head was first being developed.  Hard to say if it would be inherited, but likely not.  Are there others in the bunch doing the same or similar thing?


Edited to add that it could well be aster yellows disease:   https://www.sciencesource.com/archive/Image/Aster-Yellows-Disease-SS2587697.html
You have to scroll down through the photos in that link to see the sunflower example.  It's caused by a little phytoplasma.....bigger than a virus, but smaller than most bacteria.  Usually delivered into plants by leafhopper insects.

Kenneth Guide
Posts: 3
posted 2 months ago
Thanks for the reply John,  I have 4 other sunflowers of this species within 30 feet from this, and of the ones that have opened, they all look fine.
John Weiland
pollinator
Posts: 1816
Location: RRV of da Nort
357
posted 2 months ago
We see a lot of this in white aster growing wild in our prairie.  It seems to affect about 5-10% of the plants and I think that is fairly common for aster yellows breakouts, mostly documented in crop plants.

Kenneth Guide
Posts: 3
posted 2 months ago
oh yeah, I think you're onto it or something similar.
Posts: 2
Location: Jackson, United States
posted 1 month ago
Hi Kenny-  it looks like you still have plenty of seeds growing in it, please consider growing some out and see what happens    Becky!
Sarah Virello
Posts: 1
posted 1 month ago
Isn't close to any power lines or emf?
S Ydok
Posts: 55
Location: A NorCal clay & rock valley
3
posted 1 month ago
This makes me wish I'd have taken pictures of the beholder calendulas I got this year...
Janet Reed
pollinator
Posts: 339
Location: Dry mountains Eastern WA
77
posted 1 month ago
It is close to a uranium deposit😇