photos of 2 1/2 hour pond enlarge at our house 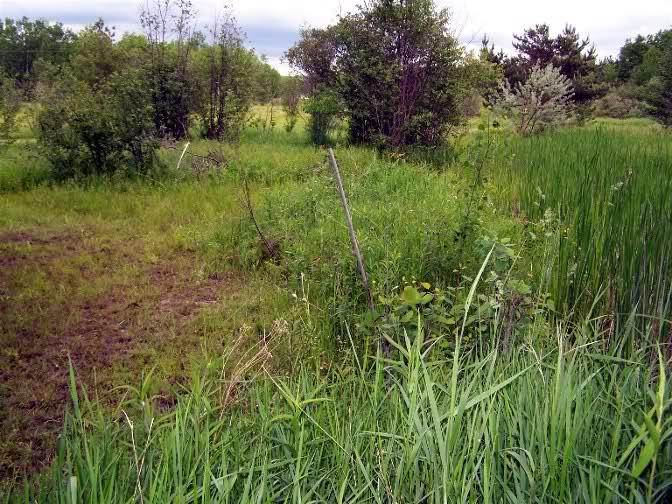 /img]
the next photo is the same field farther North..this is where we started digging last night..we dug for 1 1 /2 hours last night 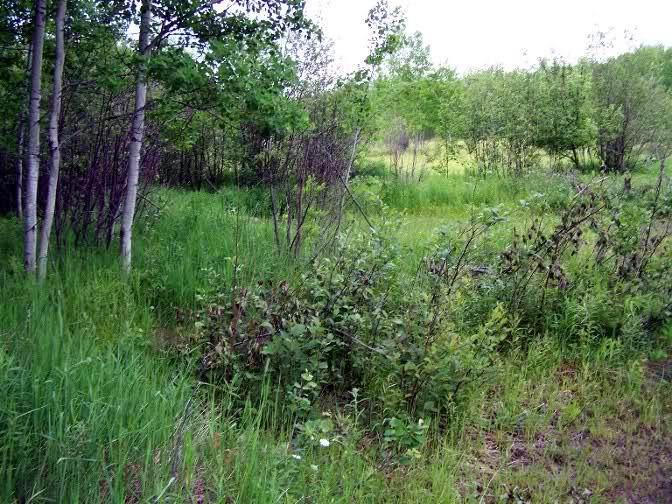 [/img]
Here are two pictures that shows what we got done in one and a half hours last night..the first picture is closest to the old pond..we just barely broke through so the old pond would fill the new dig. 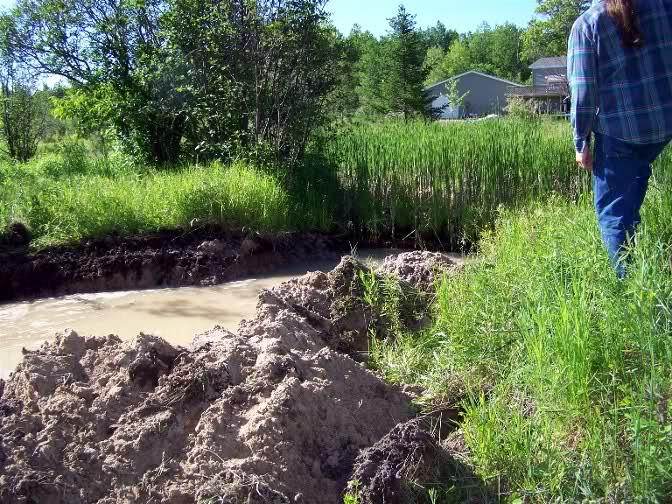 [/img]
the above picture corresponds to the first picture at the far top..note the same bush 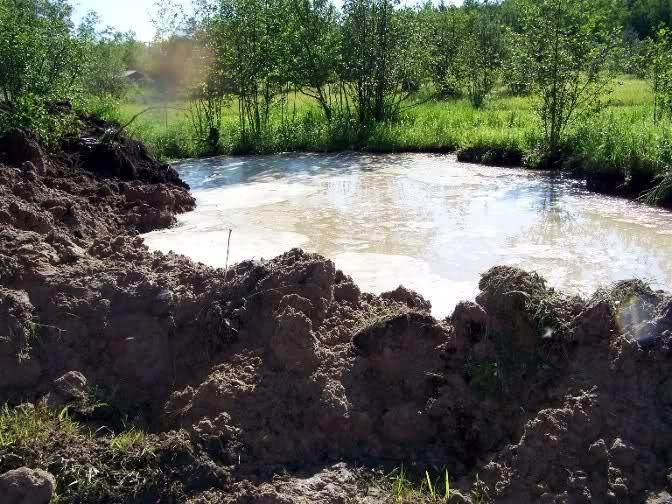 [/img]
this  photo corresponds to photo two at the top..this is where we made the first digs..last night.

on a reply i will post photos of today's dig..

Brenda Groth
pollinator
Posts: 4437
Location: North Central Michigan
29
posted 11 years ago
when we started this morning we were promised to have the backhoe for 3 hours..didn't happen..we started digging about 9:30 am..hoping to finish up by noon..but they came over and wanted the backhoe back after we only got in another hour of digging..thank God Joel was hurrying..

here are pictures from the SW ..I was standing about 2/3 of the way north of the south end of the old pond looking NE toward the new dig area..beyond the backhoe is all new..you can see where he is taking out the division between the old pond closer to me and the new farther. 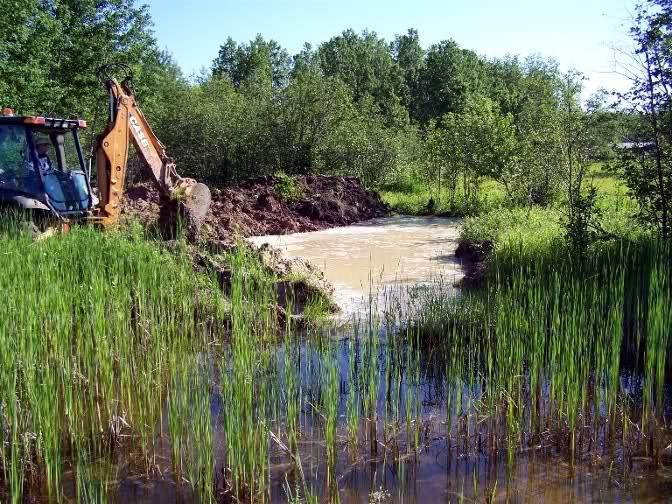 [/img]
a liittle more of the division opening up on the next couple photos.. 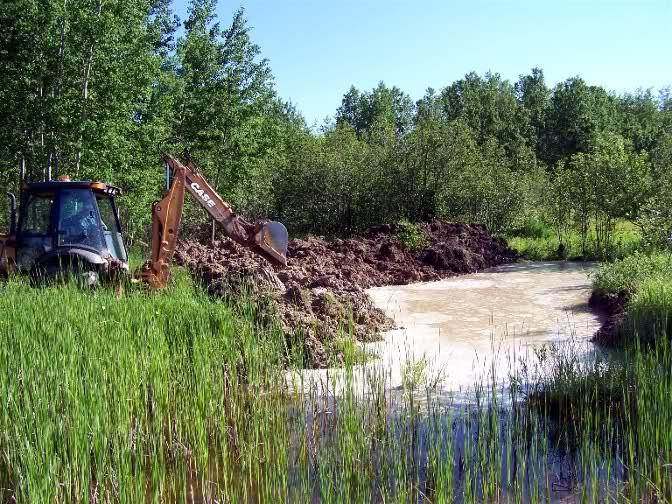 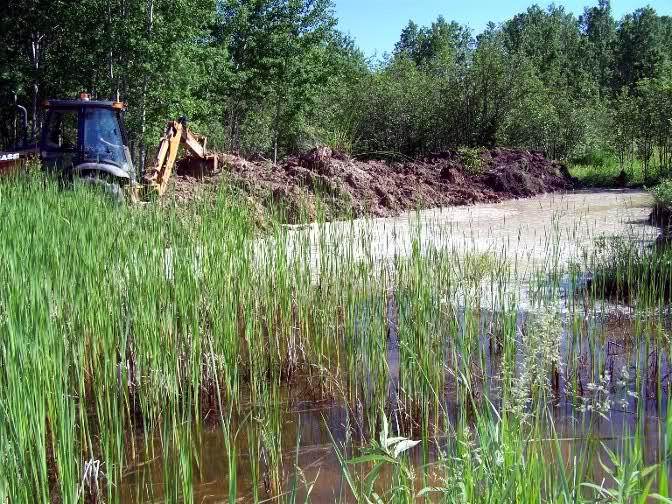 [/img]
the next picture is standing looking toward the east like in the photos above..but I was standing farther back..as where those pictures were taken above are now under water. 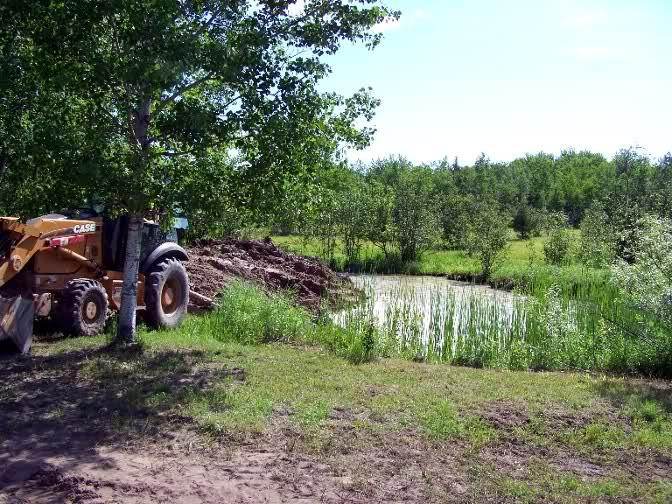 after he worked on that area he was planning on taking the backhoe around the pond perimeter and removing cattails and making it deeper..i dont' have that photographed..he got to the place where i was standing for the above photos at the top..and the guy asked for the backhoe back..so he only got about 1/3 of the way around the rest of the pond

i was standing on a peninsula that juts out into the OLD pond area at about the 1/2 way mark..there is a deep hole there..about 7 feet deep..Joel had made it to that hole and was working on the peninsula when the guy came..so he had to stop..he left the peninsula all tore up and will have to repair the rest of the work with the tractor bucket and backblade..

we forgive and forget and move on..should have had another hour..we had paid for.

anyway..the last two photos are where i was working on the new edges and bank..attempting to stabilize the edge and get a path to walk on ..as start anyway..

put in a few rocks and a few plants to stabilize the bank in case of rain.. 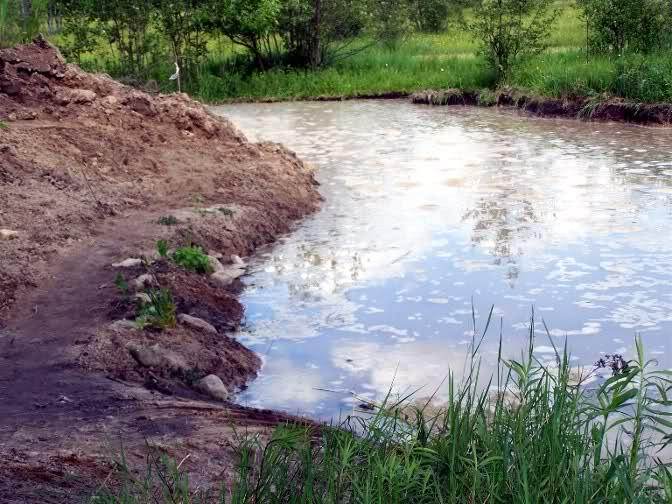 we still have a lot of work on the banks..stabilizing..lowering..going to be taking out some trees and putting the banks levelled out into the woods (low boggy)..and  on the far side the flag marks a weeping willow that had to get it's roots back into the ground..a baby..

there are h geranium, ladys mantle hostas, violets, filipendula, etc already planted..and my 3 baby winterberries got dug up and replanted..

posted 11 years ago
I don't really like big diggers and noisy machines but it's just such a pleasure to see a job like this done quickly without backbreaking effort.

I bed you're dying for the mud to settle and the plants to grow.

Brenda Groth
pollinator
Posts: 4437
Location: North Central Michigan
29
posted 11 years ago
the OLD pond was shaped like a figure 8..with an island in the narrow spot between the top and bottom of the 8 where it came close on both sides..so it WAS like 2 fairly large ponds with a narrow center and peninsulas going out toward the island on both sides..

so when he started digging the new section it was like another 0 on top of the figure 8..but then he took out the left side of the dirt between the two..so now it is a kinda large C shape or sickle shape..the new part is curved from left to right toward the old part..then below is the island and peninsula..and then below that is a big round circle pond..

Brenda Groth
pollinator
Posts: 4437
Location: North Central Michigan
29
posted 11 years ago
the top of the new part is more curved than my diagram..but i didn't mess with the lines too much..the top right hand side tends to curve up toward the top more..in the diagram than i've drawn..

Brenda Groth
pollinator
Posts: 4437
Location: North Central Michigan
29
posted 11 years ago
I have found myself taking a plastic lawn chair back under some aspen trees by the new enlarged area of the pond and just sitting and watching the frogs and the turtles and a redwing blackbird that has a nest in the cattails that Joel left in the pond 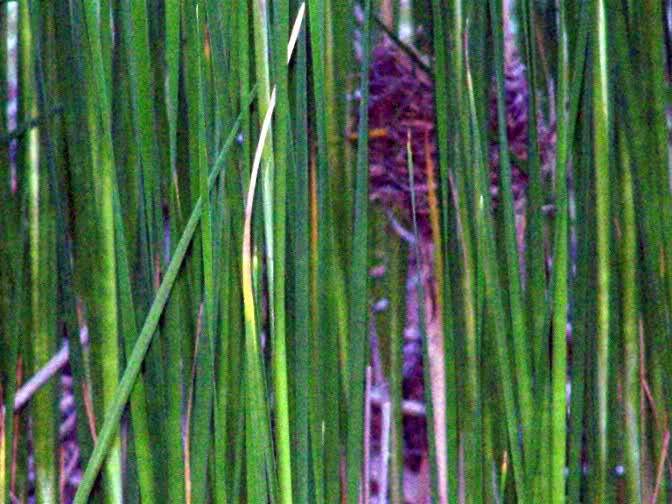 [/img]
you can't see much but I KNOW there are babies in there. 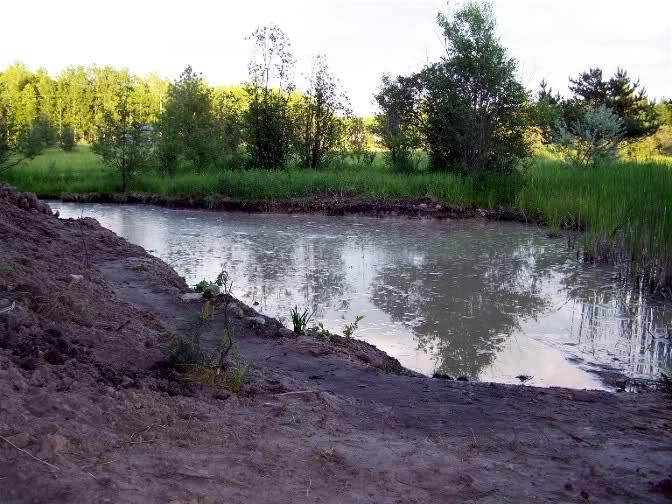 [/img]
this looks out to the east toward the open field..I also have a nice view of my son's house..the back of it...across the cattails of the rest of the pond to the south..the pond is about 200' long but you really can only see the closest part from this view as there are islands and cattails that block the view.. 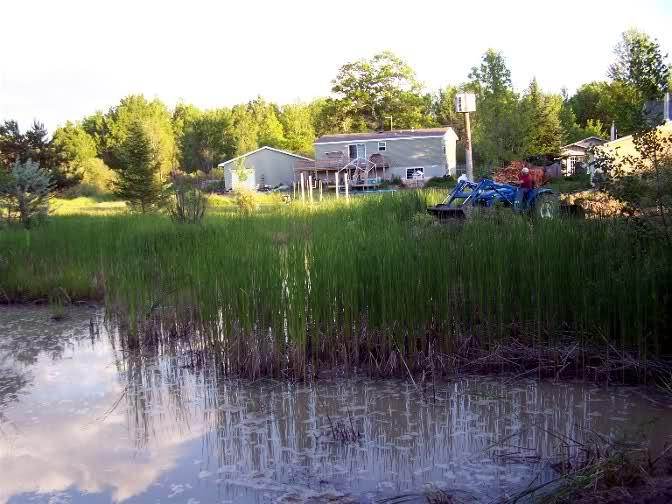 [/img]
I took this picure sitting in my chair last night while Joel was beginning to remove the peninsula that was built up about 4' above grade and was full of old steel fenceposts..wire and sod and tree roots and mess.

well last night he got that all done..i don't have a daylight photo as we worked until 10:30 last night..but here is him finishing up..before we went to bed..I'll check it out later this morning 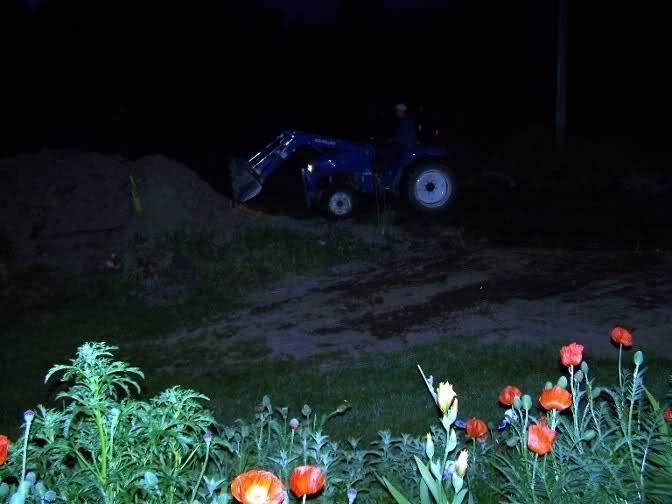 We have a hammock still in the box..and there is a nice grove of good size aspens here that overlook the pond that we could put the hammock under..so i'm thinking of assembling that for hubby for father's day and putting it back here..if it would be out of the way of Joel's tractor antics..but also we have a 2 seater covered swing i thought would be ideal for back here..as it is such a nice peaceful spot..frogs croaking, blackbirds squawking, turtles sunning themselves..and when the water clears up i'll get some feeder fish to put in there to eat mosquito larvae..right now it is just the frogs..and a few minnows that managed to sneak in somehow..in the future we hope to get an artesian well flowing to the pond..and an overflow drain to the creek..but for now it is just fed by the groundwater and springs.

Brenda Groth
pollinator
Posts: 4437
Location: North Central Michigan
29
posted 11 years ago
I was just comparing the first picture in this thread..to the top picture in the last post of this thread and being amazed that only last Friday..it was a field..and today it is a 5' deep pond.

Leah Sattler
Posts: 2603
55
posted 11 years ago
that is great brenda! I hope you get your little hideaway set up. I would vote for the two seater swing. but me and hammocks don't get along! I always wondered how everyone on gilligans island could sleep in hammocks when I was a kid

Brenda Groth
pollinator
Posts: 4437
Location: North Central Michigan
29
posted 11 years ago
yeah no photos yet, but i did put out the 2 seater swing with an awning on it..and it is great..today I got 50 little baby feeder goldfish and put in the pond..this isn't a pond with freshwater inlet other than springs..so i have no chance of regular fish at this time..I bought an austrian pine, an alberta spruce and a juniper and put in my little garden along the pond edge..and replaced the 4 dead waterlilies with 4 that appear to be alive..we'll see.

so my little retreat is taking shape nicely..