Brenda Groth
pollinator
Posts: 4437
Location: North Central Michigan
29
posted 11 years ago
Well I got up early and went out ..trying to beat the heat..and took the D R Trimmer around the pond where the weeds were about waist high..and trimmed an entire tank of gas out of the DR TRIMMER and I ran out of gas too !

it is way too lump to mow..so I'm hopin i can BEG our son into takng the tractor and smoothing out the lumps so it can be mowed..so we can access that side of the pond better..i did find some ash trees over there that I mowed around.

anyway..i'm seeing a whole lot of mulch laying cut up on the ground..most of the "weeds" had not gone to seed..so I'm thinking i'm safe to put this stuff on the garden..i'll let it dehydrate i the upper 90's temps we are having for abit before I take a rake and wheelborrow over and haul it out of there ..it is going to be a big job with all those HUMPS to wheelborrow over.

the paths will also get us to some dead alder trees..that I plan to cut down and run through our CHIPPER..we can use the chips on our paths or gardens too..but for right now..just glad to be able to get through there and see what we have decent growing..to save..and access most of the shoreline on that side now..one big job down..dozens more to do

Leah Sattler
Posts: 2603
55
posted 11 years ago
thats alot of work! but at least you get access to your pond and get get some mulch!

posted 11 years ago
Well ... just pushing in my obnoxious, unasked for, opinion ....

rather than mowing, isn't there something that graze that stuff?

And as for the dead wood - hugelkultur?

) I don't have farm animals at my home ..with my husband's head injury i have no ability to care for them myself..he is enough.

in order to have access to the backside of the pond I decided to d r trim it and use the mulch (weeds that hadn't gone to seed yet but were trimmed down..mostly goldenrod, daisy and buttercup)..to mulch my  berry plants i just had put in this spring and hadn't fully gotten mulched..just a little compost and wood bark and pineneedles..

however..the rain has kept me from raking up the mulch..to put on the garden.

will do as soon as it dries up out there ..4 days solid rain now.

the wild field will grow back..we will continue to mow a path..son is attempting to level out the high and low spots with the tractor before it grows back..so that we don't break our necks (both of us have disabilities)..and we will be removing some of the alder and willow that are completely taking over the area..leaving some farther out..but not in this particular area ..hundreds and hundreds of them ..

sure you have a right to ask..but honestly..i'm just thrilled to have some access to the backside of the pond.. 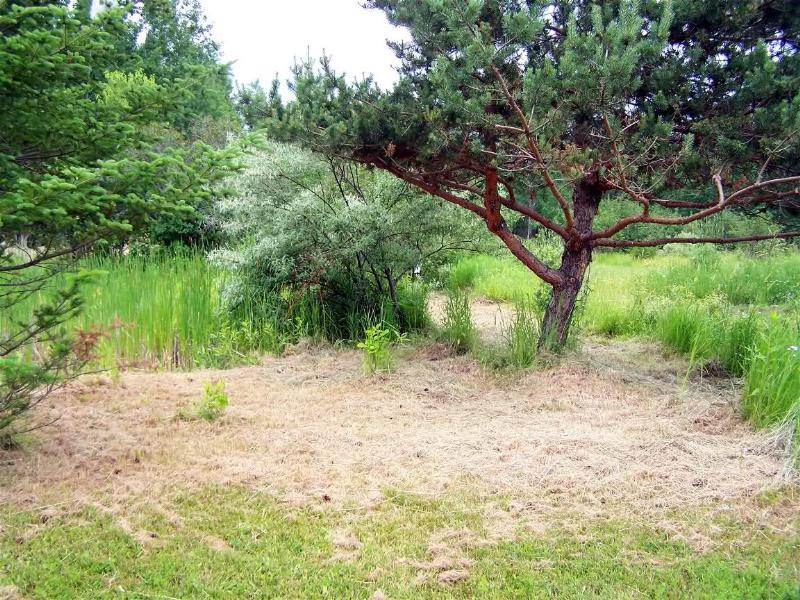 this is at the south end of the area I trimmed..i found 3 small white ash trees when I was d r trimming..which I will choose some of to allow to grow tall..also found a large hole and 3 large clumpy areas that are dangerous.the hole will be filled and the dangerously high clumps will be levelled..there is an old ditch with high spots running along the east (right ) side..and Joel has since these photos were taken filled that in with dirt from the pond dig and levelled it to preven someone from falling and to be able to easily access this area. 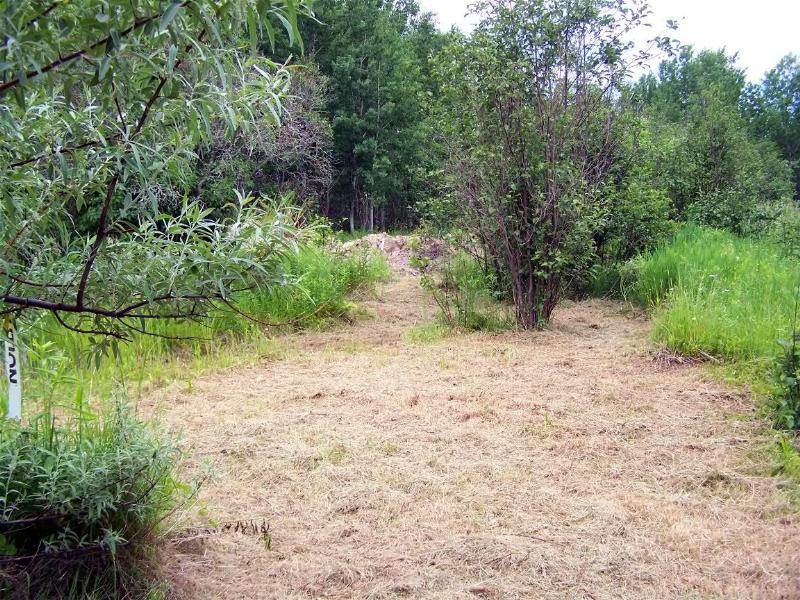 [/img]
this photo was just past the first one..there is a lovely olive growing here and a baby weeping willow..there is a lilac that was moved when our house burned and it needs to be pruned down and refurbished..there are other holes here and high spots that could use some levelling..dangerous to walk if you are partially disabled..this is mostly golden rod growing here and alder trees. 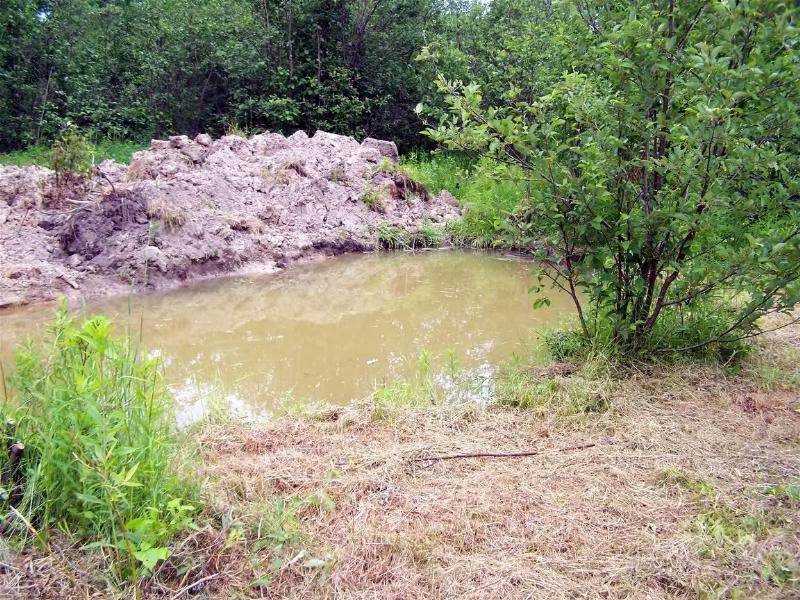 this is the apple tree that I told you I found this spring..wouldn't have known it was growing in the center of this alder shrub had I NOT seen it in full glorious bloom this spring..we will be removing the alder around the apple and trying to get it cleaned out so the apple has a chance to grow well..this is right on the edge of our pond now..after Joel dug the new part of the pond..previously it was out in the field..field is now pond.

the photos shows the water down about a foot from the drought..but levels are back up nearly to full since the rain we have had for 4 days.

we will basically leave most of this area wild..with just some levelling and grading around the pond for access not only for us but for the wildlife to be able to use it..right now it is a dead on 5' drop off into the water where this last photo was taken..which isn't safe for man or beast.

Brenda Groth
pollinator
Posts: 4437
Location: North Central Michigan
29
posted 11 years ago
the small green clumps you see in photo 1 and 3 are baby ash trees, we found some others that are not shown in the photos..also you can see that some of the alder trees are really dying off..don't know for sure why..possibly the hard freezes or drought as we have lost some ash and catalpa trees to the hard freezes this summer..also.

Ash trees are iffy here cause of the emerald ash borer..but we will let a few of them grow here..we are also planting other trees around the pond including several types of maples, elder, winterberry, evergreens (you see some there are dozens and dozens)..but we are also leaving some willow and alder for browse..removing only the ones that are in very bad health or are overcrowding the other things like the apple and lilac.

Joel has already moved some of the dirt piles..and will continue to remove them (seen in the bottom photo)..I've begun to remove dead aspen trees and small ones that are not well placed and making a path behind the dirt piles for the tractor to get in and pull it back and move it..we have to put some around the north.(.far in last photo) end of the pond to make a dam and overflow to the ditch that is not visible beyond..that will be done later this summer as we have the time to do so.

the pond is to the left in all the photos as well as the new part of the pond forward in the last photo..the pond is 140 feet long and 75 feet wide..and has two areas that are very deep and some medium deep and some very shallow areas where we grow cattails and other marginal water crops.

rose macaskie
Posts: 2134
9
posted 11 years ago
Paul wheaton, why shoud it be obnoxiouse for you to make a suggestion? It is very mild to say coudln't you get it grazed and passed by an animal or that the wood would do for huglekulture.
When are you going to ask that paul stamets what he thinks about huglekulture? Does the buried wood get rotted by funigi?agri rose macaskie.
Brenda Groth
pollinator
Posts: 4437
Location: North Central Michigan
29
posted 11 years ago
Paul isn't obnoxious..he wasn't aware i was making a path around the pond so i could access it..obviously..i don't mind him suggesting other options..and i do use hugelkulture ..so i wasn't offended by that either.

sometimes you need access and the only way to get it is to cut down things in your way.