Below is a link to all the photos. I am describing the problem here but also there are comments on the photos online. The link is "public" and so anyone can see the photos

We use our Fisher Mamma Bear wood stove to heat the house. It is located in our basement. We have used it for 11 seasons now. The Fisher stove, and chimney were in the house when we bought it and the chimney is about 25 years old.

The Fisher stove was working just fine until about 2 weeks ago. It started "belching smoke" from the dampers on the front of the stove, belching smoke when we went to put wood in it and then leaking smoke from around the Thimble's section where the metal stove pipe went into the wall. The metal stove pipe was just replaced two seasons ago and the chimney was cleaned two seasons ago too.

Questions:
- Should we be using a double wall metal stove pipe instead of the single wall?

- Does everything look OK down in the hole?

- Does it look like an abnormal amount of build up cerosote in the chimney? Or is that about normal for two seasons of use?

- What caused the clay flue to break? We did not stick anything in there. Would high heat break it? Or just old age?

Thank you very much for any and all tips, suggestions and advice.

This picture is of the broke flue piece but all the photos are at the link above: 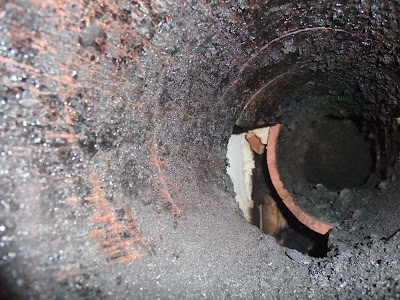 posted 10 years ago
Mary Ann Asbill : Not much good news here, Im afraid,
Because of the appearance that the outside surface of the tile is not stained with creosote it looks as though your break is recent - you will probably never Know why! I expect that your chimney sweep is going to have very bad news for you . If you don't like it you should get a second opinion , be aware that in some locations people like your chimney sweep are obligated to report dangerous conditions to a building inspector/Fire marshal !

Question : Are there other separate flues inside this chimney, possibly even unused ! It is possible to carefully remove the flue tile but this is generally done by breaking it up in place not much salvage but IF you could get it all out a piece of Stainless steel flex pipe could be run to replace the old tile , this is however pricey, I expect that your homeowners insurance being less than 20 yrs old will have some form of a waiver not allowing claims, especially if it didn't require yearly inspections !

Being from New York and just looking at some pictures there is not much positive I can say or do ! g'Luck Allen L.

Mary Ann Asbill
Posts: 129
Location: Western North Carolina
posted 10 years ago
Thank you. There are other flues in the chimney but we do not use them. The chimney is a three flue chimney. We only use the one - the wood stove from the basement.
Thanks for the tips. We are still waiting for the Chimney man to call back but are trying to learn as much as we can before he comes out so that we will be prepared to
make a good decision. Thanks!

Posts: 238
Location: AR ~ozark mountain range~zone7a
9
posted 10 years ago
Seems you might be kina lucky, your rectangular chimney is probably OK, your damage is just the fractured 22" thimble.

So the idea of the thimble was to connect the stove to the chimney, where the adobe failed, why not replace the 22" connection out of plain straight stove pipe? Will a 6" piece of plain stove pipe (probably very tight) slide within the existing adobe?, if it does, you may have to drive the stove pipe with a hammer (22" deep) to connect into the chimney.

(try to find the straight type plain 6" heavy gauge stove pipe without annular grooves, if you can only find the kind with annular grooves you should probably hammer those out flat, so the annular groove doesn't protrude, which would cause further bursting of the existing adobe shell, the crimped end of pipe is a good thing that guides the pipe thru the adobe shell as you drive it to the 22" depth) (after driving to the chimney, if a couple inches of the new connector is left hanging out of the wall {where you have your foil cover}that might provide a excellent attachment flange for the other stove pipe connector to be secured with sheet metal screws instead of 'just shoved in')

While driving in a new stove pipe connector, the fractured adobe, may fracture completely & fall to the bottom but probably won't matter because it is already broken. If the 6" stove pipe will forcibly fit within the adobe, I would clean/scrape the adobe before installing the new connector pipe. I really doubt there is anything 'combustible' within the chimney structure to be concerned with, but to use a 6" ID/ 8" OD pipe might be useful to make the connection, it would keep the intense heat off the cinder block, but would require complete removal of the old thimble, and probably enlarging the hole in the cinder block wall, that might be a better repair.

You have a bad problem, but I think it is safely repairable.

I suggest your local building code officer to inspect your repair, before testing with fire.

james beam
Mary Ann Asbill
Posts: 129
Location: Western North Carolina
posted 10 years ago
Thank you! We decided to have the professional Chimney expert out here to make the repair. We think we could make the repair ourselves but, in this case, safety is more important and so he will do a better job than us. He has already looked at our photos but he wants to decide how to make the repair after he cleans the chimney and send his camera down there. He has a video camera he puts down the chimney smoke stack and watches it on a screen. He did it for us another time. He said he can send it down the broken area too and check all down in the base of the chimney just to be sure everything is OK down there. Thank you for the advice! We appreciate all the suggestions since it helps us be better prepared to make good choices. Have a good weekend.

Posts: 238
Location: AR ~ozark mountain range~zone7a
9
posted 10 years ago
oh good deal you got a chimney guy...waytogo! I just wonder, is it possible that some water dripped onto the hot adobe & caused the fracture, might ask chimney guy about that.

james beam
Mary Ann Asbill
Posts: 129
Location: Western North Carolina
posted 10 years ago
Hello - I don't think any water could have gotten on the clay flue since it is enclosed in the chimney? Maybe? I will ask him about it just in case. We have a metal cap thing over all three flues at the top - at the very top on the roof. Each chimney section has its own metal top with screen etc. I will ask him about that. He is coming out next week. Thanks!