preferred clothing for People of Cascadia - woven or skins?

The Souix where I came from mainly used buckskin or deerskin for their clothing and still do for their Ceremonial garments, however I do not enjoy the idea of doing my own skinning to make clothing. I have read that the Navajo started to use the Churro sheep for wool sometime around the 1700's. The Native Americans that you study, did they spin and/or weave and if so, what plant fibers or animals fibers did they use? I am very curious as I love to work with fiber!

No land yet, but growing what I can with what I have!

posted 7 years ago
The good news is if you're in Cascadia now, there's not much point to buckskins. You might get away with them for a mostly-indoor life nowadays, but explorers who tried like Lewis & Clark found that the hides rotted too quickly to be able to tan them fast enough to keep up with wearing them out. Too wet; even modern commercially-tanned leathers mildew if left alone too long. There's a nice line about Sacagawea's response to the vote about which side of the river to camp on for the winter: "I don't care where there's more elk (wapiti), as long as we're near a good patch of wapato (duck potato)."
...

The primary material for garments in the coastal climates was processed from the inner bark of cedar (rot-resistant), often lined with wool; or a cedar warp (loom-strands) would be used with woolen weft (weavers).
Some cultures had intense weaving traditions e.g. look up the Chilkat blankets or "Raven blankets". Here's a mention: 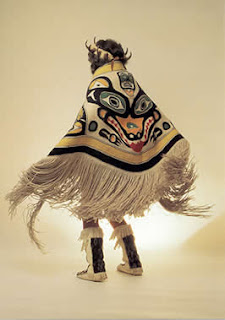 The local Northwest Coast natives reportedly had 'wool dogs,' special breeds that were kept separate from camp dogs and bred for their spinning-quality fur/fiber. Spindle whorls are among the cherished heirlooms / archeological artifacts from traditional pre-contact culture.

Hats were also traditional, often cedar-bark or split cedar-root, with other materials for color, or painted with paints made from black tar, or sometimes reds and whites. I assume they may have used the same salmon-egg paint base as for the canoe painting, it should stick equally well to tightly woven cedar hats.

...
As far as I know (yet), the inland peoples (e.g. east Cascades, Great Basin) made more use of skins and furs, but also used plant fiber materials. Still looking into that one. It's dry enough here for good tanning conditions, and cold enough that I think you'd need either furs or good woolens. Apparently someone related to the locals may have been responsible for the oldest known American clothing, the woven reed sandals found in a cave near a former glacial-meltwater lake in eastern Oregon, dated to something like 8000 BC.

Let me know if you're passionate about learning more of this stuff, I may have some lessons or links stored up somewhere.

By the way:
- both cedar roots and salmon eggs are less common now than formerly.

I think a good approximation could be made for the paint base with chicken egg yolk (emulsifier) plus linseed oil, poppyseed oil, or your choice of paint-quality oil. Salmon eggs are a bit oilier than most poultry.

Hemp, manila, or linen twine are all reasonable approximations of the textures a good spinner produced with cedar. They did some very strong, fine, soft threads with it; aside from the rot-resistance you could experiment with almost any natural fiber. Another way to harvest is to watch for storm-downed logs, or neighbors clearing out 'problem' cedars, and take bark only from recently-killed trees instead of harming or felling living trees for bark or roots.
Roots were generally harvested as long tendrils from the edges of a tree, often near an embankment. I don't think we have enough really big cedars left for this kind of gathering to be a good idea; and the conditions that would make it easy might also cause erosion into salmon streams. I would seek expert (conservation or tribal) guidance before harvesting.

Spruce root was used in a similar way; and I think you could practice the technique with small-grade, flexible reeds or even with a plastic weaver.
The nice thing about the roots was how they swell when wet, creating a truly watertight hat or pot.

Might be worth cultivating some forest just to have the chance to play with it again.