Brenda Groth
pollinator
Posts: 4437
Location: North Central Michigan
29
posted 12 years ago
on another thread I was asked to post photographs of my two black raspberry plants that have grown huge..they were planted 3  years ago..and this year and last year they bore berries from June thru the end of august..these have just now stopped bearing for the year..we still get a berry or two..but not a lot.

As I said in the other thread..I planted three bushes but only two lived..so these are two bushes..

last year a long cane lay on the ground over winter and in the spring at every node it sprouted baby plants in the lawn..so i dug them up and moved them to my rear raspberry garden..but this is the photo of the two parent plants..today..not bearing any longer but that's ok.. 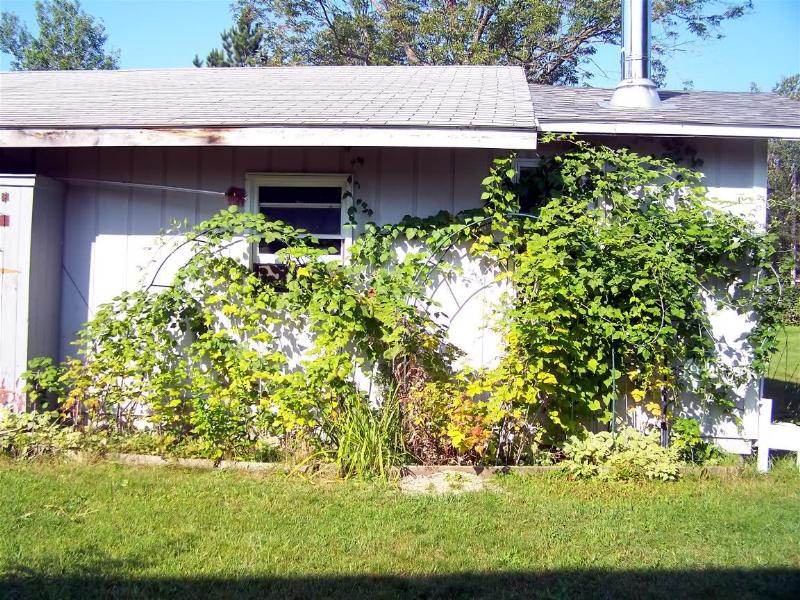 These berries have now grown their canes for next year..they grew up to the roof eaves, then bent over and grew all the way back to the ground and were growing along the ground..so we LOOPED them into large circles and they grew back up to the roof again and back around..so they are anywhere from 12 to 30 feet long..thought about pruning them back..but what the heck this worked well so we'll see if they produce well being so huge..!!!

they are against the NE side of our garage with only EAST sunshine and they are under the eaves..you can see the one under the shorter overhang is growing better than the one under the longer overhang..probably cause it gets more water..as the only water these plants get are from the rain.

they are in a raised bed 2x6 with homemade ash and aspen wood chip mulch that has been down since they were planted..no other fertilizer..they don't get weedy under them..however there are a few plants growing below them..daffodills, polygonum, daylilly, orphine, and a few others..but they basically have remained weedfree and prolific..these are very sweet and juicy berries and as i said ..these two plants bore every single day since the end of June..and I just ate the last cupful of ripe berries yesterday..so hopefully we'll get a similar results from the babies we planted in our other raspberry garden (which also has two varieties of reds and Fallgolds.

Oh this is zone 4/5 Michigan

Leah Sattler
Posts: 2603
55
posted 12 years ago
wow! I am going to you for rasberry advice! I have two plants that seem to be doing well, they were just planted this spring and then rather neglected. what about pruning? when where and how should I?

Brenda Groth
pollinator
Posts: 4437
Location: North Central Michigan
29
posted 12 years ago
well Leah I'm no expert on the raspberries..but they do seem to do well for me..i prune out the old canes after they are done bearing..if there is no new cane growing for next year..i wait and prune out the old canes in the spring..so i don't lose the place of the plant..

as for pruning the length..i guess you should..but i don't.. i guess if you prune them they'll send out more fruiting branches ..maybe i'll experiment with a few plants..prune some..and leave some unpruned next year..but these..don't get pruned..unless the deer or bunnies prune them over winter.