In the podcast, Paul continues his discussion with Abe Coley and Rory Paige on Azby Brown’s book Just Enough: Lessons on Living Green from Traditional Japan.

This section focuses on homes, from the humblest peasants and farmers to the higher class. The house that they discuss is a modest home with 6 people living it. They discuss clothing, taxes, food storage, building materials, layout, and the tools and equipment used for daily living that are stored in the home.

They move on to discuss the kamdo, which looks similar to a J-tube rocket stove, and the living space with its hidden storage and moveable panel walls. There is a discussion of population control and each person’s role in the household.

There is also a nice chat about Abe’s hillbilly dishwasher.

posted 4 years ago
Love this podcast. It worked out just perfect as I just finished this section of the book. Very inspiring podcast. Thanks for offering it free. Looking forward to hearing the rest. 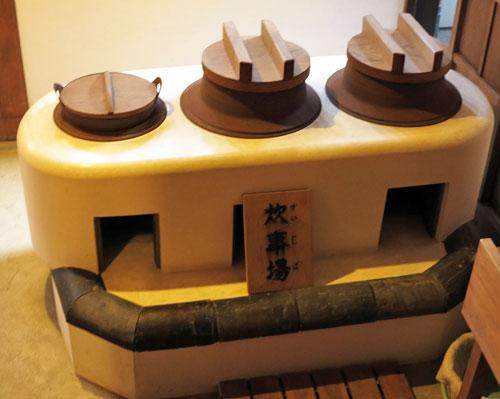 For those of you who haven't heard the podcast or read the book yet, this is very much like a predecessor to the rocket cookstove. The big difference is there is no chimney. Not only that, there is no room around the pot for the smoke to escape. The smoke comes back out the fire hole, which happens to be where the poor cook is kneeling.

This reminds me of a medieval English stove I've just started learning about. The book Cooking & Dining in Medieval England by Brears, has a picture of an almost (but not quite) identical stove set up. Like in Just Enough, this stove is built to fit a specific pot and fits it so well that the smoke comes back out the fire hole.

There are a lot of similarities between the architecture in this chapter and medieval England pre the Little Ice Age - no chimneys for a start. Both England and Japanese traditions had their main cookfire in the middle of the main room. The podcast wonders where the smoke goes. Check out this video about Tudor Monastic farm, about 20 min, 50 seconds in.

She says it helps with fuel efficiency. Apparently, about 70% of the heat goes up the chimney. By having the fire in the middle of the main room, and no chimney, they get more heat for their fuel... or so it seems. This doesn't work so well if the house is separated into little rooms, but if it has an open concept, then I think there might be something in it. Maybe that's why rocket mass heaters are so efficient, they capture the heat that would otherwise go through the chimney? So it has some of the advantages of the RMH, but with more smoke?

Ages back, I visited Japan and went to a museum village near Gifu. It's a bunch of houses that were saved and put together in one place so we can see what life was like. The houses there were probably Edo age or older. I don't remember much, except they had a fire going in the fire pits. That was amazing to me because everything was made of wood! Apparently the fire helps preserve the house. My friend translated and told me that a house is viewed as a living thing, the smoke protects it from bugs and getting too moist (August is EXTREMELY humid in that part of Honshu! - something to think about with the cob part at the start of the podcast). The smoke wasn't so bad, as the fire was small and there were gaps between the wooden boards near the top of the walls. There was also a sort of a window thing which my memory is not clear about, but the smoke could travel through that too. Some of the smoke made its way to the attic and helped preserve things that were stored up there.

Anyway, your podcast has filled me with so many good ideas. It makes a wonderful companion to the book, and I suspect would be just as interesting on its own, without the book.

I'm eager to learn more about how Japan, faced with impending ecological collapsed, transformed itself into a sustainable society... at least for a few hundred years. I wonder if we can learn something from this?