Most efficient RMH exhaust routing for my greenhouse

posted 7 years ago
Are there any opinions (with justification please) out there for the best placement/thermal mass (I.e. grow bed vs. cob bench) for the exhaust pipe routing in my high tunnel green house. If the exhaust is run through one of the raised beds then should I use something beside soil to act as my thermal energy accumulator. Been lurking around for a while, thought now might be a good time to start contributing, and maybe score a copy of Erica's new book. Thanks in advance.

Chris Blomeley
Posts: 7
posted 7 years ago
Hi, I have the same problem to work out, our community farm has 2 poly tunnels 4x16 yards perhaps we could scrtch each others heads!
allen lumley
pollinator
Posts: 4154
Location: Northern New York Zone4-5 the OUTER 'RONDACs percip 36''
61
I like...

posted 7 years ago
Dave and Chris : Why not both, A raised grow bed on top of your cob bench!. Seriously the most important thing to plan on is how to lay out your traffic flow to
avoid stepping on your horizontal pipes ! I expect that you will rarely feel the need to walk on your raised bed ! Can you share your location, and how many
months you want to use it ?
For the Good of the craft ! As always, your comments, questions, are Solicited and Welcome ! Big Al !

posted 7 years ago
I'm in north-central Idaho. About 4100ft and 90 days frost free. I'm hoping to be able to grow my tomatoes in the summer and keep some greens,carrots,etc to harvest through the winter. My hoop is 16x24. There are 3ft high by three foot wide raised/huegel hybrid beds on the north (more traditional huegel is 5 ft tall and wide extending outside of hoop),south,and west perimeters. I left the center open for a rmh in the future (10x21 in the clear). How will cob hold up under the constant moisture of a foot or two of soil on top of it with plants, etc growing there?

posted 7 years ago
Dave Redvalley : A foot of soil sounds like a lot to me ! " Oregon Cob" Is the 'gold standard' around which most cob is measured Ianto Evans states that while
he and his wife were ready to try Traditional cob their early experiments convinced them to add much more Sand to their Cob over the amounts found in
Traditional Cob , There is much less swelling and slumping with well laid 'Oregon Cob'. Regular Cob is much more susceptible to water splashing, and water
running off of, its self and gets treated with a finishing plaster, I do know people who have reported good luck with just enough plastic to cover the mostly flat
top of their cob bench,this will require a box with sides but not a bottom or top to retain your soil !

Re-reading your 1st post, we use ductwork as a form around which to place our Cob material the cob continuing to retain the shape of the ducting for years and
is better able to with stand being attacked with a potato fork or some one standing on it Than just pipe buried in the Dirt, Now I see where your 2' of soil was
coming from !

posted 7 years ago
I'll try to get a sketch-up done to better clarify my layout. Need to download it first and play around a little though. Sounds like surrounding the duct work with cob is going to be the way to go. Next question... should I provide some sort of insulation between the ground and the cob or just heat the ground around the cob as well? What I envision is another three foot tall grow bed, RMH on one end with the bottom of the bed filled with cob/duct (18-24 inches tall) then a sheet of plastic covered with my growing medium/compost/mulch/etc. Once I get sketch-up downloaded and running I'll post some diagrams of what I've got and what I plan to do.

Chris Blomeley
Posts: 7
posted 7 years ago
Hi, my location is in Essex UK. Raised bed sounds like a construction job which will take the weight of cob/soil. is it possible to sink the RMH and have the pipe work in the soil?
Dave Dahlsrud
Posts: 531
Location: North-Central Idaho, 4100 ft elev., 24 in precip
46
I like...

posted 7 years ago
Chris
What do you guys have to work with for your tunnels. How are they laid out, do you have raised beds, are you wanting start plants or grow crops in there? I'd like to bounce some more ideas around and see what we can come up with.

posted 7 years ago
Dave Redvalley : It all sounds good to me ! Your Cob bench can be just as high as you want it to be, Less bending over, and the raised beds will always mark the
location of your horizontal ductwork, helping keep it safe! Deciding how much heat you will need at both ends of your growing season will Determine how much
heat you will want to store in your thermal mass and floor, go big or go home

At the start of your growing season you will only need to keep your grow bed
toasty and you can do 50% of that with a row cover ! Good luck ! For the Good of the Craft ! Your comment,questions are solicited and Welcome ! Big AL

posted 7 years ago
Hi guys,
it sounds like Chris and Dave both have some good ideas for how to lay out a heated bed for their greenhouses.

A couple comments:
1) Yes, you can definitely do a sub-floor heating pipe layout to maximize your flexibility in the space.
2) Cob is stout when dry (under 15% core moisture). But with regular daily watering, it will revert to its softer, wet form. It may slump - it certainly won't handle loads well. We helped repair one such greenhouse heater where garden volunteers had stepped up on the thinly-cobbed-over pipes to water hanging plants and crushed the pipes.

For these reasons, I'd probably go with either the sub-floor or a box-style raised bed. You can fill around the pipes with ordinary subsoil, no special soil mix required. I recommend including a layer of tile or stone between subsoil and topsoil, to minimize destructive interference between plant roots, pipes, and sharp tools. Likewise, I'd protect and mark sub-floor pipes with a little decorative slate or tile, to avert possible future punctures or crushing from some localized force like pointy ladder feet or irrigation spikes. The tile pathway can include maintenance hatches/ cleanout covers, too.

We have a greenhouse plan in draft right now, being site-tested by several regular contributors here. I'm happy to release draft copies privately; the final version won't be released until we have good reports of a full year of use. (These plans are an improvement on several prior versions.)
There's a huge amount of discussion on greenhouse heaters already up here, too.

Allen, would you mind pointing these folks toward the 'thread of our own' that has gotten so much good discussion going?

Would love to see some pictures and further discussion on this thread, too.

posted 7 years ago
Chris Blomeley :
Dave Redvalley: When in Doubt, give Erica what she wants, much better safe than sorry, her way has many more safeguards !

Erica wants me to tell you how to get to the rocket stove topic/thread Rocket stoves in Greenhouses, our own forum topic

What works for me is; in the upper Right hand corner of this page, between the Permies Banner and the Permies Video(s) of the day
is the Permies Toolbox, click on the search button, and enter Rocket Stoves in Greenhouses, our own forum topic in the google
search engine and then set the search for Permies - and click on !

This should bring you to this Rocket Stove forum thread at page 1 of (currently) 4,as Erica pointed out there is a lot of good information
with a little well meaning Mis-information like mine! Sorry ! That sneaks in occasionally, mine carefully, have fun and consider posting
there or if you have a specific question feel free to start a new post !

For the Good of the Craft, As always, your comments / questions are solicited and are Welcome Big AL !

Chris Blomeley
Posts: 7
posted 7 years ago
Thank you both, that's probably saved me a lot of time and resources. I need to go away and work on the thread you mentioned and draw up some plans. I chose sub terrainian RMH as as already have a second year of salad crops etc. First things first I also need to build my first RMH I've played with designs (on paper) from clips on permies. I would like to buy some plans or one of your books but I don't know which one, any advice please.

posted 7 years ago
This is my first attempt at a sketch-up, but essentially the center section is my proposed RMH and raised grow bed with ducting running underneath. Right now that area is open, only the exterior beds are in. The sides are designed to roll up the poly sheeting about two feet for ventilation, and then roll all the way to ground level during the winter with a three inch air gap between the beds and the exterior sheeting. The walkways are essentially sunken from one to two feet below grade (ground slopes from front to back) as a sort of cold sink. The north side is a berm/huegel bed extending beyond the exterior of the hoop. I plan on letting a few hens run in there during the winter on the walkways with a deep bedding/compost/mulch and then use that on the beds come spring time when I let the hens roam paddocks to the south of the greenhouse. Hope this all makes a little more sense. If anyone sees a problem let me know I'm more than willing to listen to some feedback on this, I want to get this thing right the first time.
Filename: Hoop1.skp
File size: 34 Kbytes

Posts: 791
Location: Tonasket washington
44
posted 7 years ago
Well for me your first attempt failed so i think you might need to try saving in a different format. I don't see where your paths are any sort of problem nor that making a raised bed would be very hard at all. However you might consider an air lock type of setup so just incase your stove smokes back you aren't killing to many plants. Exhaust up like a chimney, fry chickens on stove, Bon appetite. you have several options but as erica said running the duct in a bid of wood as your walls for the raised bed works well (personally i like my cob beds because it allows me to make more soil over time). put a slight upward slope in the ducting layout (about 1/4" over 10") and i like to bring the vertical back to the barrel and then up so i cant use a bit of the heat to ensure my draft. you will need to spend a bit of time seeing how much a wet bed varies compared to a dry bed.
ok hope this helped
Ernie

posted 7 years ago
Here's another version of my hoop house. Hopefully it will be easier to view than the previous. I'll try to get some pictures of what I have existing soon.
Hoop1.jpg 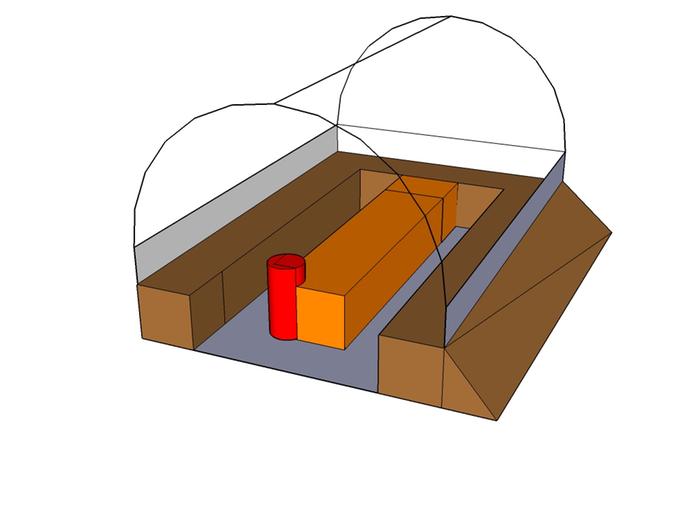