getting ready to build with a few questions:)

Steve Philip
Posts: 5
posted 7 years ago
before anyone asks, yes i have read the book:) ( i have also done a cob building workshop, that is where i learned about rmh)

the house we are going to be heating is around 2000 square feet. we live in a colorado ski town, and our only form of heat is the very poorly placed fireplace/stove placed in the corner. it is a rental, but we have the permission of our landlord to build it as long as we abide by some rules he laid out. 1. it needs to be removable, as he is not completely sold on it working, and new tenants down the road might not want it. he has read some of the info and watched some videos, but he wants to see it in action, so it has to be semi removable. cob is, so i am alright with it, but see rule 2. 2. it has to be light enough that it does not hurt the foundation/ craw space we live on top of. 3. lastly it has to use the existing chimney. this leads me to the questions.

the pictures below are where i was going to build it. the barrel will go where the dog crate is and the chairs are stacked up, the bench will be where the couch is, then i was going to run the pipe just above the floor over to the fireplace. i was going to run stove pipe over the stone and cover it in cob and plaster to make it into thermal mass as well as the bench, then exhaust it up the existing chimney. i was also thinking about building a seat by the door and running some pipe through it to make a nice seat and increase the thermal battery. i am a bit worried about it being too much "movement" in the piping. i measured it all out, and with out the seat by the door it will be around 25' of exhaust, with the seat it will be around 32'. i should also note that i plan on using 8" ducting for the bench, and then moving into 6" for the floor crossing and fireplace/seat area.

1. is there a lighter thermal mass that i could use instead of cob or broken up concrete that will still function well for the bench/seat?
2. the ceiling clearance from the top of the barrel is going to be about 4', is that enough? if we use a hot water tank that is taller, can we incase most of it in cob to keep it cooler?
3. looking at the pictures, do you see a better placement for the rmh?
4. i am having a hard time tracking down a barrel up here in the mountains, there isn't a scrap yard for a few hours, and i haven't had any luck on finding one on criags list. can i use a metal trash can from home depot? any ideas?
5. where it crosses the floor part, it is 6 1/2 high, and i will be running 6" ducting, i was going to pack the wood floor with vermiculite and then just cob over it, then place a flagstone where it will be stepped on. any thoughts on this? its the best solution i could come up with to get the exhaust over to the fireplace. i was thinking about going down to 4", but it would create a bottleneck, but i could use 2 placed side by side...
6. thoughts on the extra seat by the door. it will add 4 45 degree turns to the overall design.

thanks for any input:) 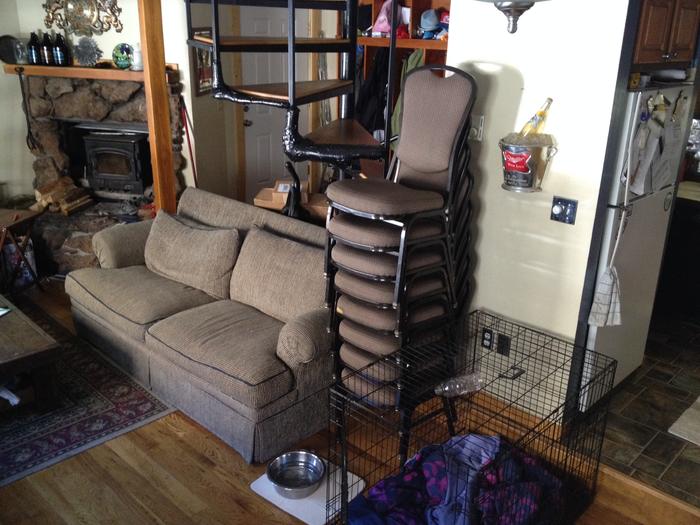 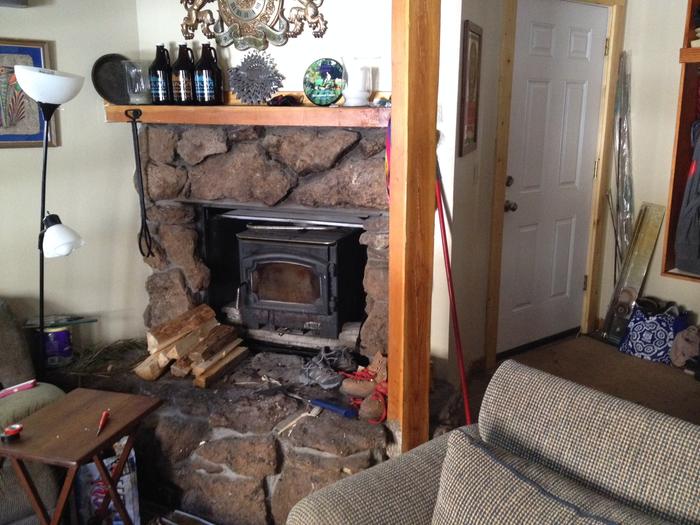 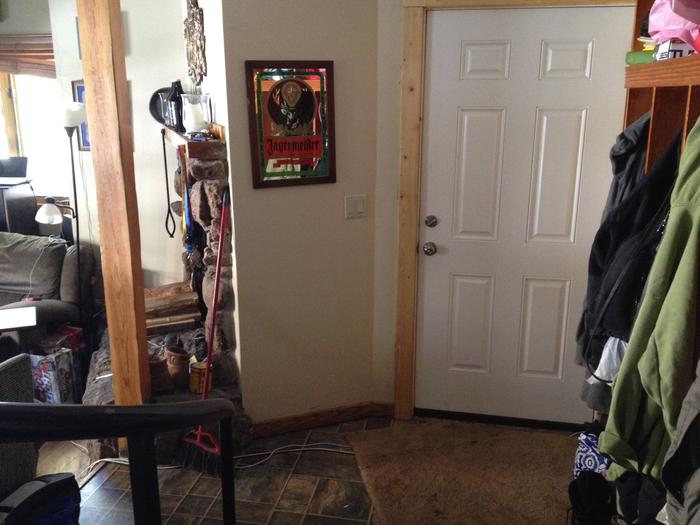 Steve Philip
Posts: 5
posted 7 years ago
This is the step area that I was talking about above 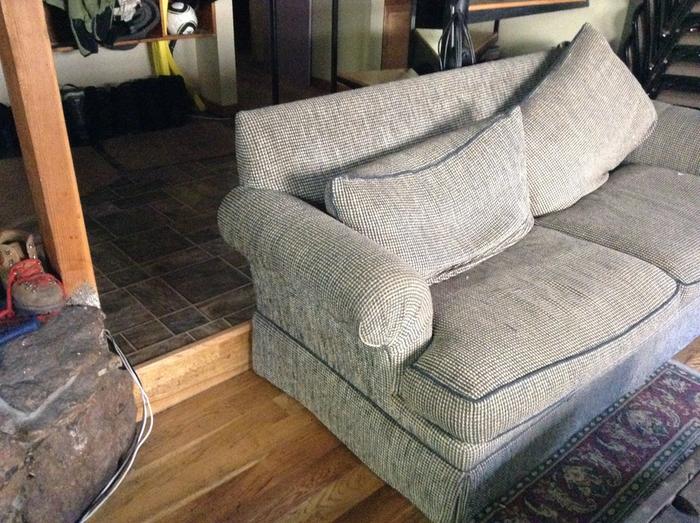 michael Egan
Posts: 76
Location: central illinois
1
posted 7 years ago
Steve,
Can you draw a layout of your first floor? Does your exhaust need to go to where the fireplace is?
Steve Philip
Posts: 5
posted 7 years ago
yes, it does need to go to the fireplace. the couch in the picture is the middle of the room, and the middle of the house. ill try to draw a pic and upload it tomorrow
allen lumley
pollinator
Posts: 4154
Location: Northern New York Zone4-5 the OUTER 'RONDACs percip 36''
61
I like...

posted 7 years ago
Steve Philip : Welcome to Permies.com, and a big Welcome to Permies Rocket, wood Heater, and Cob Forum Threads. With over 19,000 members world wide, you can come
here nearly 24 / 7 and find some one who wants to talk about what you want to talk about Treasure their input, you have a difficult build for a first build and the solutions
to your problems will come from many places !

1) No, you are going to need more mass not less

2)Yes, that will be fine *
2a) only about 1/2 way up !
3)WE will probably need to find a better place, or move the refrigerator, that close to all that heat and your refrigerator will be running all the time and your beer will still be warm !

Sorry to be such a downer but this this where were tear it down in our head 10 times so that we don't have so many tear downs in our future ! To see How a R.M.H. should be put
into an existing house with a wooden floor I need you to go to villiagevideo.org/products/rmh/scenes !
after you see these videos, decide if you want to show them to your landlord, as with only a little wiggle room this is how you must proceed !

Somehow, they didn't mention that detail in your Cob Workshop ! For the Good of the Craft ! Big AL !

Steve Philip
Posts: 5
posted 7 years ago
Thanks for the replys! Below is a drawing of the floor plan. It's not quite to scale, but I included all measurements that I thought would be helpful. I'm on my phone, so I'll add a bit more info from my computer in I minute.
image.jpg 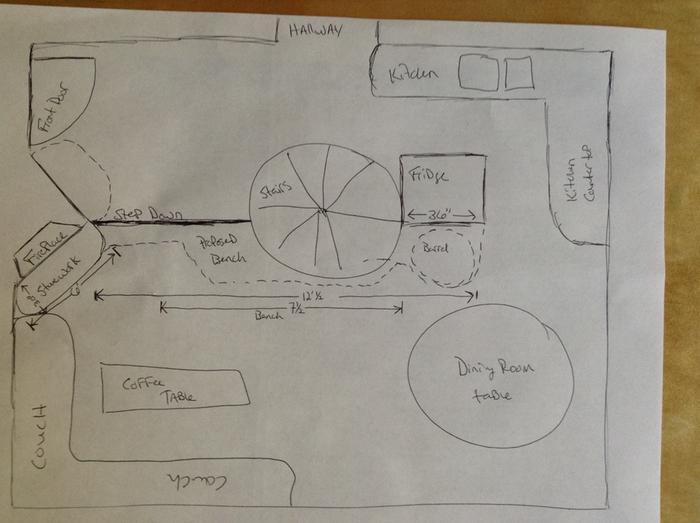 Steve Philip
Posts: 5
posted 7 years ago
thanks again for the warm welcome to the forum:)

to address the mass question, we will have 2 benches. 1 will be a 7 1/2 foot bench in the middle of the room, and the second will be the 6 foot stonework from the fireplace. i wanted to add the area by the door by making a seat that would be 2' x3 1/2, but might not due to the tight space and the 4 45's that would be needed. i might just burry a metal box in it and have a entrance and exit pipe though. i know to heat a house this big i need a lot of mass, but i was looking for something lighter than cob. due to the way that the house was built, there isn't a way to reinforce the crawspace. the room we are building in was an addition (everything from the step down in the pic) and there is no way to get to the area that would need reinforcement. it is built almost on top of a cinderblock wall though. the original building had a block wall as the foundation, that is where the step down is, then they added another crawspace under the addition, but did not leave a way in or out. crazy builders lol. i would say we are limited to 500 to 600lbs in additional weight, the bench and barrel area will weigh about that, the fireplace is built on top of solid cinder blocks, so weight in that area doesn't matter.

as for 8" vs 6", i could run 8 in the main bench and then move down to 2 4" pipes to cross the floor/step area, then run one 4" up to the seat by the door, and the other 4" over the stonework then they both could exit using the fireplace. 6" seems like it would be easier to lay 3 runs in the bench though. one down, one back tward the barrel, and one back tward the fireplace. as for being 6" off the wall and floor, it will be in the bench, but then it will be laying almost on the floor to cross the step area, and then it will be laid on the stonework of the fireplace to have it act as a heat battery. i plan on lining the wall of the bench/barrel area with 4" of clay/vermiculite mix to act as a insulator. the floor will get 6" of the same mix. to cross the floor where the step is, using 2 4" ducts it will get 2" of the clay/vermiculite mix. this is the area that worries me the most. the exhaust temps after going through 21' of ducting should be down in the 100 to 150 range, but its hard to tell till its built. any comment on this from experience?

i can't move the fridge, its a built in with walls on both sides, but i might add some insulation to protect it, maybe put the barrel a bit further out as well. the celing is a 9' celing, so i was going to make sure that the top of the barrel has a foot or more of cobb on top of it. the barrel will sit around the 5 1/2 height.

Chad Meyers
Posts: 26
Location: Cheverie, NS, Canada
posted 7 years ago
DISCLAIMER - I have no experience in building these -

Going down to a smaller pipe in the exhaust is a bad idea. it will restrict flow and be problematic. flow is everything to a fire, it needs oxygen to burn.

What is wrong with the wall/space opposite to the spot you have picked out now? I think it would be ideal, it is away from the fridge and you could replace the corner couch with a cob one. The load bearing of the outside wall should also be better then the middle of the house too. You also will not have to deal with the step.

If that will not work out, how about building the step up higher, then two steps down. Think of it like a built in stair master.

I realize my suggestion is not central to the home, but it will still heat it all. I curently heat a 150 year old 2 story home (about 3000 sq.ft) with a wood stove in the corner (http://www.pacificenergy.net/products/wood/stoves/summit-classic/) the only problem is that a lot of the heat goes up the chimny. (I am about to start a RMH myself)