I just put together a rocket mass heater (8" system, 55 gallon drum). I fired it up and it draws OK, which I thought at first meant it was a success. But now I can't decide whether or not it's working properly. My main problem is that the temperature of the gasses in the exit flue remains low (not above 100 degrees after a mere 10' cob bench). I have tons of condensation pouring out the inspection holes, including the one right after the barrel, which I gather shouldn't happen when the smoke is hot enough. The wet bench (6" of cob over the flue as recommended in the book) doesn't heat up even after 10+ hours of running the stove continuously. I would very much appreciate some help from folks who have experience with these stoves. My BIG question is: will these problems go away as the cob dries, or is there a structural problem I need to address (I would really like not to have to dismantle the cobbed-in barrel!)?

So my questions are:
-Is a brand new, still wet stove supposed to work right away (gasses exiting the building over 200 degrees, etc.), or is this a temporary situation, and the issues are going to fix themselves when it dries?
-Could the problem be: weak draw due to obstruction in the barrel, poor construction of the barrel-exit flue connection, inadequate heat riser insulation, etc. (which would require starting over)?
-Could it be that too much heat is being lost through the exposed part of the barrel (top third), and that I could fix it by cobbing it all over?

For more details I should say that the stove draws OK when hot, though it occasionally backs up. The top of the barrel reaches 400 degrees with the best fires. I was planning to have a cob bed after the bench, but since it's not heating the bench I'm postponing that. I don't think the length of the flue or number of bends is an issue because I have experimented with firing up the stove with the inspection hole at 10' open, hence simulating a short flue (the draw increases a little but nothing to write home about). My heat riser and burn tube are kick-ass, made with firebrick.

I'd really like to know if I can relax and wait for the stove to dry, or if I need to take it apart while it's still wet to fix it! Why isn't it making more heat?! Winter is coming and I'm freaking out.

Thanks for your help,

Chris Adlam
Willamette Valley, OR
Cindy Mathieu
Posts: 245
Location: near Houston, TX; zone 8b
3
posted 9 years ago
The opening between your barrel and the flue needs to be at least 12" x 8" to 8" round.

Do you have any pictures of the stove under construction so that others may have an idea where to start with analyzing your problem?

paul carter
Posts: 18
posted 9 years ago
Give it a chance to dry out, you need lots of energy to evaporate the water out of the system.
kevin Davis
Posts: 16
Location: North Central New Mexico 7.000'
posted 9 years ago
Hi Paul, I just completed a 6' system. I used Adobe for the bench and I made it a little wet. I started running the stove right away and was disappointed at my bench temps. That's when I realized the water was killing the temps. I put fans on it until each layer was dry and my temps started to climb up. I'm on my last and "decorative" layer and although the core is not completely dry the temps are around 115 degrees.I never did get any water inside the ductwork though. Also my exhaust temps have never exceeded 90.
kevin Davis
Posts: 16
Location: North Central New Mexico 7.000'
posted 9 years ago
The basics of my RMH
IMG_0126.jpg 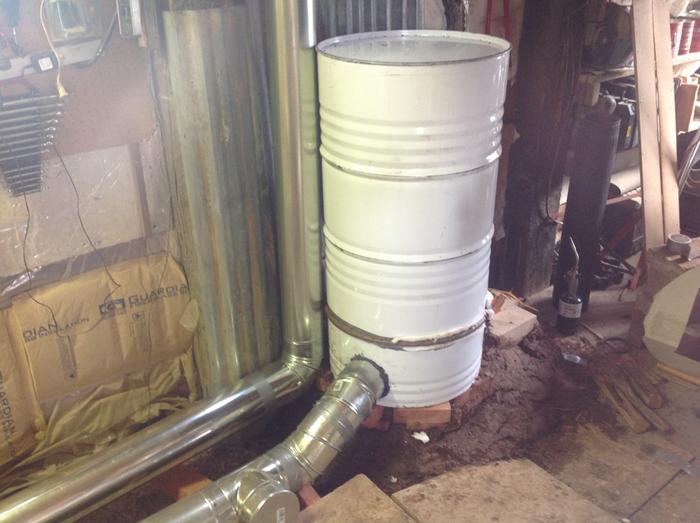 Could you please explain what you mean by those dimension? I tried to make a bell-shaped cavity, as described in the Ianto Evans book, at the junction of the barrel and the flue. That was the hardest part to figure out, but since it draws OK, I thought I did it well enough.

I don't have any great photos, but here is the one that shows the junction best. It is now covered with (a lot of) cob.

The Evans book mentions 250 degrees as a standard exit temp, so that is what I was expecting. Plus, I was expecting the bench to heat up at least a little, even when wet. Have you actually experienced it not working at all until fully dry? 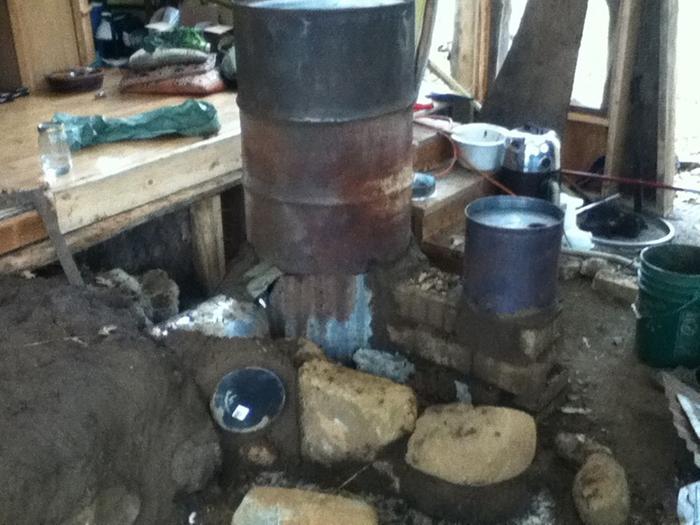 Cindy Mathieu
Posts: 245
Location: near Houston, TX; zone 8b
3
posted 9 years ago
If you make a transition from a rectangular opening to a round flue pipe, the rectangular part has to be 12" x 8". If you have an 8" feed tube, you need to keep the whole exhaust path at 8".

paul carter
Posts: 18
posted 9 years ago
How long have you be running the stove if the room is cold most of the heat will be lost from the barrel. My work shop stove as no mass and the exit temps is very low until the shop as warmed.
Karl De Pauw
Posts: 24
Location: Aarschot belgium
posted 9 years ago
I see your feedtube is almost 1/2 your riser hight can you try to run without that littel barrel on it (just to see if it draws better,until your bench warms up ,dry's out )

Most fault's are made in the passagings , heatriser to barrel and barrel to bench or bell .
The given space between barrel and heatriser is a minimum, so it's better to go bigger .
The manifold from the barrel to your piping chould be bigger than most poeple think .

Karl De Pauw
Posts: 24
Location: Aarschot belgium
posted 9 years ago
Something you micht considder is to use directional heatting ,this iswere you don't place your heatriser in the middel of the barrel but to the side off it .
The advantage off this is you have a bigger space to create a large manifault at the bottom of the barrel, the heat will be bigger on the opposit side of the heatriser.
If you can schift your barrel to the bench a bit more creating a bigger gab between the barrelside and heatriser there your manifault may be big enouf (plus your stairs will be cooler)

Chris Adlam
Posts: 4
posted 9 years ago
Karl, thanks for your suggestions. I think the junction between the barrel and the flue might be a little tight; 4" between the insulation and beginning of the flue, although there is more space below and on the sides. Changing that now would be the hardest part.

The burn barrel was removed; it was too tall and killed the draw.

The barrel gets nice and hot (400F), the heat just disappears after that! So I'm still going to wait for it to dry before doing anything drastic, in case everything magically resolves itself.
Karl De Pauw
Posts: 24
Location: Aarschot belgium
posted 9 years ago
how is it drying out now ? we oldies like feedback too lol :-p
if it's dry in a few days let me know otherwisse there is an other problem
try to stoke it realy hard because now you have the time to do something about the probs
when your cold it's to late
kind regards