Ben Van Der Kar
Posts: 10
Location: S. California Zone 10
posted 7 years ago
So it is my understanding that the recommendation is to construct steep and narrow hugelkultur beds to allow for more plantable space. Are there any other reasons for this?
The reason I ask is because I'm having a hard time picturing much water retention from a very steep surface. As I live where the average rainfall is about 18 inches, when it rains and when I irrigate, I want the water to be able to soak in as much as possible. For that reason I have recently constructed some sunken garden beds so that the water doesn't migrate elsewhere.

So what if I were to pile the wood of my hugel in a way that there are little steps/terraces going up the hugel instead of being steep? In my mind this sounds more effective because water coming down would have a better chance at soaking into the bed before sliding down and away. What do you all think?
Charles Tarnard
Posts: 337
Location: PDX Zone 8b 1/6th acre
13
posted 7 years ago
I did this. I did it mostly for aesthetics, so it didn't look like I just piled a bunch of dirt in my front yard. It is still growing pretty well, but this is its first season. We'll see how awesome it looks come late summer.

I was going to make a third level, but once I got to this point it seemed excessive for what I was doing and difficult to plant in, so I left it. I watered it a couple times after first planting in late summer, it seems like the wood has stopped wicking the moisture faster than the rain can drop it, but I live in Oregon, so that may not apply to you for a longer period of time.

I now have onions and garlic growing in the lower section as well as some volunteer ground ivy, clover, and I think plantain that I may remove in spring. I put some strawberry and asparagus rhizomes in the bottom section, but those are either not getting enough moisture or don't like the cold of fall or maybe there's something else they don't like. If they never sprout I can live with that, but hopefully they'll sprout when it warms up.

I haven't really seen any downside to this method thus far, but it's early.

FTR, I'm new to hugel and new to permaculture, so I don't have years to back up this experiment, but I thought I'd share. 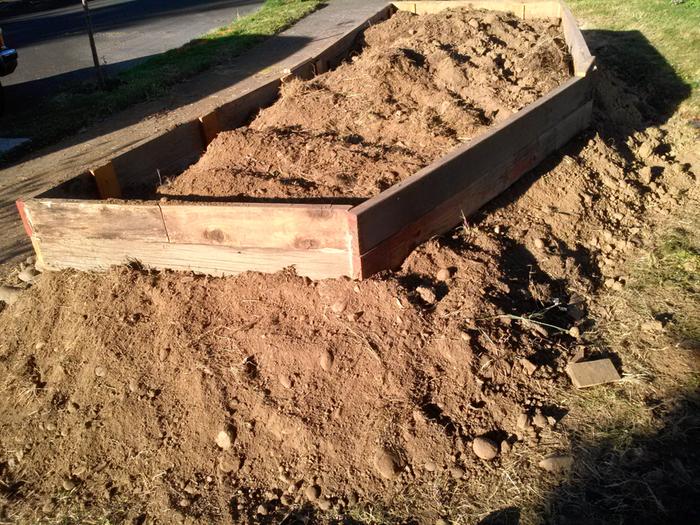 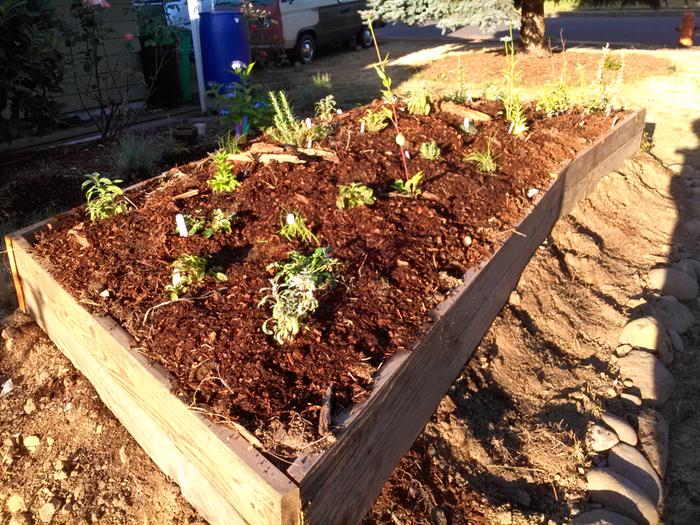 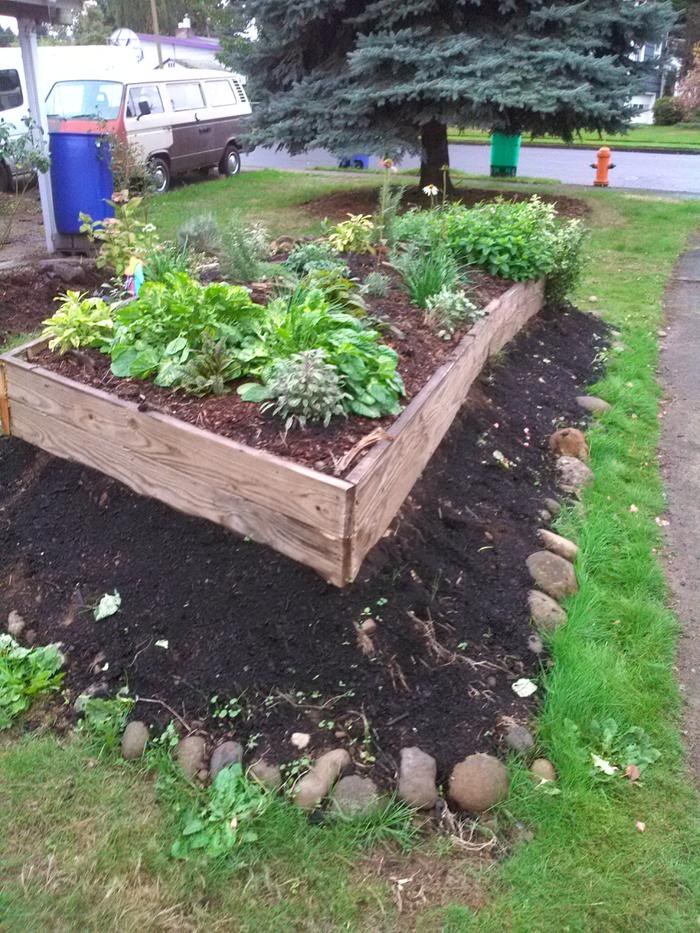 James Colbert
Posts: 273
12
posted 7 years ago
Hey Ben, there are many benefits to the shape of traditional hugelkulturs I will just list them off: 1. Greatly increased surface area for growing crops; 2. increased growing season as the finger like projection of the hugel acts as a heat sink warming up faster than the surround soil surface, this is directly related to the angle of the bed, in effect you are orienting your soil towards the sun so it can absorb more solar energy 3. Variation in microclimate -- If you are growing all of the same thing flat is fine otherwise a polyculture which will further increase your productivity and the nutritional value of the food you eat is better suited to the varying microclimates created by the hugelkultur especially if you have a series of beds running parallel.

As for watering, if you built your hugels well watering should occur very infrequently if at all , The way to prevent excessive runoff is with a heavy mulch and with a high density of plants roots to hold the soil in place. If you need to water the Hugel I would recommend either drip or even better sub-surface irrigation. In all likelihood you would not have built very large hugels anyway (5 -6 feet) That being the case your hugels will not be as pointed. Also keep in mind the the mounds settle over time becoming less pointed.
Charles Tarnard
Posts: 337
Location: PDX Zone 8b 1/6th acre
13
posted 7 years ago
I think that unless you set up your hugel very rigidly, you'll still have plenty of micro-climate to work with. My little bed has a morning sun section, evening sun section, shaded section, as well as a full sun section with reflective backing and a level full sun section.

I have no rebuttal to anything else said in the previous post.
Ben Van Der Kar
Posts: 10
Location: S. California Zone 10
posted 7 years ago
Thanks for sharing the pix Charles! Visuals are always nice. And it certainly looks as if what you've done is working. Do you plan to plant the space between the rock exterior and the raised bed?

That seems like a good summation of the benefits of hugelkultur, thank you James! I'm especially glad you pointed out the orientation of soild on hugelbeds towards the sun. I hadn't thought of that aspec and I'm sure it makes a significant difference especially during the winter months when the sun is lower in the sky.

I guess my curiosity towards a terraced hugelbed stems from my skepticism that little to no irrigation is necessary for hugel. I've been wanting to build a hugel ever since I heard of it on here. However as I'm still living with the parents, mother isn't sold yet on the thought of having a big hugelmound in the backyard. As such I've found myself digging some pretty deep holes so I can bury wood and end up with a groundlevel bed.

I took a PDC this past summer and believe it or not, the instructor had never heard of hugelkultur!! I made sure to change this and encourage the rest of the class to check it out

Thinkin I might still like to experiment with a terraced hugelbed although I am now more at ease with the structure of a traditional hugel.
Charles Tarnard
Posts: 337
Location: PDX Zone 8b 1/6th acre
13
posted 7 years ago
The newest picture is still a couple months old.

All the stuff about the strawberries and garlic and onions and asparagus in my previous post is in the lower tier of the bed. I'll be planting more there in spring, but I'm going to wait to see how those rhizomes do before I decide what.

In the upper level, I have landcress, sorrell, chives, garlic chives, mints, licorice, aztec sweet herb, cosmos, and columbine that are just exploding. I also have some rosemary, lavender, sage, and tea plants that look healthy, but haven't shown much growth. I love walking past it every day on my way to my van.