posted 7 years ago
My friend and I are discussing the idea of building a vertical mass for a rocket mass heater. It would be for a place that you don't have room for a bench or bed. So the first question is figuring out how much ducting you could run through the mass. The real question is that if you are running your ducting spiraling upward in a small area you have have alot of elbows and drag. 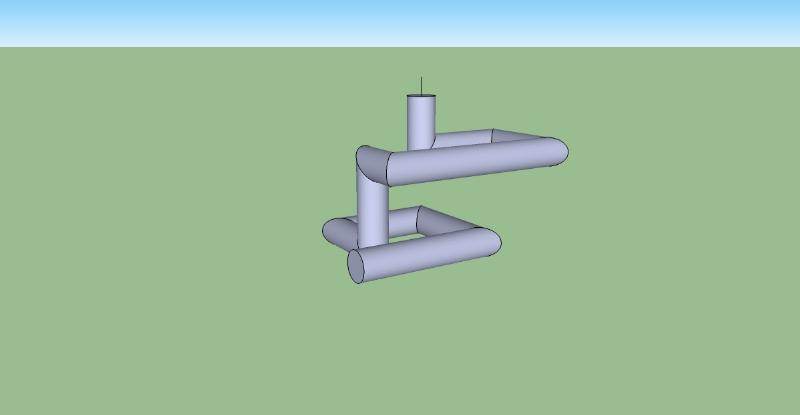 So from what I have researched you can at 5 to 10 feet of length for every 15 of vertical rise. But that's in the chimney,so I don't know if it would count, or if it would just be less effective, maybe only 5 feet of length added for every 17 ft or rise. Any thoughts on this would be appreciated, especially is someone has done some testing on it.

Posts: 3369
Location: Southern alps, on the French side of the french /italian border 5000ft elevation
170
posted 7 years ago
Nicholas, look into bells.

Joshua Smith
Posts: 31
Location: Brentwood, Tennessee, USA
7
posted 7 years ago
I will have to read more on the bells, but at first glance it reminds me of Erica Wisner's double chamber cob oven. I have not thought of having cavities in the thermal mass. In the workshops Erica asks us to think about what tools/devices we use for water and then she turns them upside down to use them with heat. That is how we need to be thinking. We may not need to put all the exhaust heat through pipe. Thanks Satamax Antone.
Satamax Antone
gardener

Posts: 3369
Location: Southern alps, on the French side of the french /italian border 5000ft elevation
170
posted 7 years ago
Joshua, just call me Max

Well, i knew about Bells, somewhat. Then Peter van den Berg, refined the batch rocket onto an idea From Donkey and Canyon, whom you can find at the Donkey32 board.

I participated in that "adventures with an horizontal feed" thread, giving some ideas for european materials. And then i found some cheap refractory tubing at a supplier, just on the other side of the italian border.

I still at that point wanted to do a massonry bell. And a friend gave me a watter boiler/tank of 500L I kind of went against Peter's advice, and stuffed the Batch rocket into the bell made by the water tank. I didn't use it last winter, fiddling with a J tube. For me it's nay bother territory now, thoses J tubes. I've put the batch rocket and bell in my workshop at the beggining of the autumn. Before it got cold. Tried and refined it. And now, i'm absolutely sold on the batch rocket and bell system. I should admit, i went over the limits as far as tubing and additional bells come. Went back to normal, ish. I have very long tubes.

But the point is, i did one burn about 9.30 this morning. By four of the afternoon, you could still feel the warmth in the workshop. Which is a 320sqf insulated part of a larger 1500sqf French vaulted mews. The walls are 2ft thick, and don't have any insulation, nor has the ceiling or vaults. But as long as i heat the place, one or two burns a day are enough. And 4 hours after the fire goes off, the bell, small one for instance, is still lukewarm.

Cindy Mathieu
Posts: 245
Location: near Houston, TX; zone 8b
3
posted 7 years ago
We have done some testing with bells. Our blog site has a discussion of bells vs. flues. I would second what Satamax said. Bells, when implemented properly, have inherently better draft and heat storage than flues.

I am a partner in Dragon Heaters.

posted 7 years ago
I haven't had much chance to play with bells yet, but I would imagine they work beautifully.
They would call for the masonry skills to seal them, and for the shape of the heater to accommodate the height differential to conveniently place the inlet, outlet, and dome in proportion.
I have seen a number of projects that I liked, and some that I wouldn't put in a house due to iffy seals. (some are in both categories

If you want to use flues, they can give a little more control over the void spaces, and make it easier to handle your materials without advanced masonry skills and forethought. They basically make the flow more predictable for a novice, and help you visualize and protect the negative space during assembly.
They can also be used to force heat through shapes or spaces where a bell would be difficult to fit, or would not flow properly.

For each 90 degree bend (elbow or capped T), subtract 5 feet from the maximum length.
For each foot of corrugated or rough material (for example ribbed elbows or flexible ducting - or a rough makeshift corner of brick), subtract 10 feet. (We generally recommend not to use rough materials if smooth is available).
For a vertical, indoor chimney (rising within the house to exit near / above the roof ridge), you can add a little length back. We estimate maybe 5 to 10 feet per 15 feet of vertical chimney, but this is heavily dependent on outdoor temperature.
If there is a bypass chimney primer, or the chimney is near the barrel, or the heating channels tilt upward more than 10% grade or so, you can add maybe another 5 or 10 feet for the boosted draft. (I am making that one up as I go along.)

If you plan to run the heater when it is warmer outdoors than indoors, or at near-equivalent temps ...
(like 60s F, or test-firing the stove when it is 80 outside and you feel chilly stepping into a 65 degree indoor room full of damp cob, or trying to cold-start the stove on a sunny winter afternoon when it has been alone in a freezing guest cabin for several weeks)
... then the vertical chimney is no advantage, or needs to be heated up to generate any advantage. In that case, include a bypass for priming the chimney, or subtract another 10 feet or so from your horizontal run to reduce drag and boost exit temperature.
Mass heaters that are run consistently (daily or a few times weekly) throughout the cold season, keeping the mass significantly warmer than outside air, are much easier to light and tend.

Working lengths for 8" rocket mass heaters typically come out to 20-40 feet long.
For 6" heaters, 15 to 30 or 35 feet is normal.
2 to 4 elbows is normal. 6 or 8 elbows can be done on a short system.
Your system shows 9 elbows (7or 8 if you don't count the ones that turn to vertical), so the theoretical "drag equivalent" would be about 30-45 feet on elbows alone.
You could reduce this a bit by making the pass from the bottom course to the upper one a diagonal, with 2 45-degree elbows instead of 2 90's (this softens the turbulence at the turn, and 2 45's can be counted as roughly equivalent to 1 90).
With that slight design change, you would be at 30 feet of drag-equivalent, so you could put about 20 linear feet of horizontal pipe between your elbows (including the diagonal pipe).

The most turns I have ever attempted, and will not ever try to duplicate, was 14 elbows, about 10 full elbows worth ( 900 degrees worth) of actual turns (some elbows were set at 45 or 60 rather than 90).
That system had a separate pre-heater which was used to charge up the mass before attempting to light the rocket stove, and needed it.

That's a good question whether in-mass verticals count toward the chimney total.
Since I'm not really confident in just how much draft a modestly warm vertical chimney actually offers (it differs from hour to hour, as outdoor temperatures vary), I would hesitate to tell you a specific number of feet equivalent for that slight draft boost.

Posts: 3369
Location: Southern alps, on the French side of the french /italian border 5000ft elevation
170
posted 7 years ago
Erica, Bells are not necessarily made out of massonry.

This one takes 4 hours to go from end of the burn hot, to lukewarm. Which is not bad considered that it's just a metal bell.

I'm leaning kind of the same way as Matthew. Metal bell. Then dry stack some mass around it.