Gavin Phillips
Posts: 12
Location: Dalbeattie, Scotland, UK
posted 6 years ago
I want to sell pizza in the street, so the oven needs to be light enough to push on a handcart and must be fairly robust.

So I have ruled out cob ( too heavy and too fragile). As I have storage near where I will be selling, I don't need and don't want to mount it on a trailer pulled behind a car.

So I attempt to build a wood-fired oven in a 55 gallon drum enclosing a smaller drum. I have Kikki Denzer's and Max and Eva Edelson's books and have seen the Aprovecho barrel-in-barrel design.

The riser or flue for the rocket is 4" i.e. 100 sq cm. The 'donut' or space between the barrels is 885 sq cm. The chimney is 4" diameter i.e. 77 sq cm. Following the Aprovecho idea, I built in fins ( you can just see them in the final picture) to increase contact time of exhaust gases on the inner barrel. I can now see that the position of the fins will reduce the 885 sq cm in the space between the barrels and I may need to remove some of those fins.


I have test-fired only once and would appreciate comment on the following:

1) This rocket seems under-powered. I think I'll need a bigger rocket - how big should the rocket-chimney or flue be?
2) Is there any reason not to add more rockets ?


Here's where I've got to with my prototype: 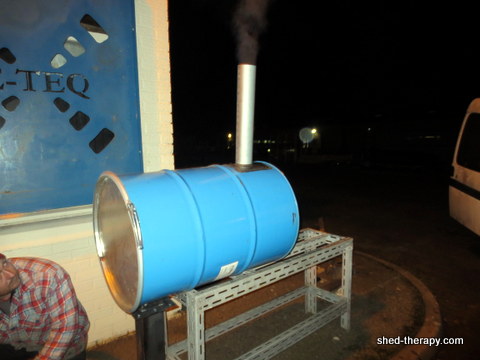 If you are not having fun - tell someone!

Posts: 3264
Location: Southern alps, on the French side of the french /italian border 5000ft elevation
163
posted 6 years ago
All reight big man?

Well, i've tried. And i had a far more powerfull rocket to start with.

First of all, it ain't no rocket if it's not insulated, and in which case, metal is doomed, because it will spall to death.

If i was in your position, i'd use a Batch rocket, because they burn far more than a L or J tube rocket. Send the gases to a black oven, where the smoke goes inside the oven. Insulate the oven (example, fill the space between little barrel and big barrel with rockwool. Even better, fill it with sand, which will keep the heat and act as mass. And insulate outside of the big barrel. And make the chimney plunge in the barrel for a bell effect. Even better, make the heat riser send it's gases under the pizza stone, but keeping a gap between front of teh barrel and the pizza stone, of enough CSA to have the gases enter the inside of the oven via the front, then make the pizza stone short, so the chimney can plunge behind it, lower than the stone, with enough of a gap around to have your right CSA. And put a baffle between the back end of the stone and the bottom of the barrel, so the gases can't go direct from heat riser to chimney.

Logan Jonker
Posts: 17
Location: Missouri
posted 6 years ago
Why isn't your burn chamber or flue insulated? I just saw in the first reply about the metal- so maybe thinner metal with insulation- perhaps bricks in a frame if you are worried about breakage. I would also insulate the flue.

I agree with the idea of directing the gasses directly into the chamber and line the chamber with mass or pizza stone/masonry stone.

Smaller/thinner pieces of wood would burn hotter and faster.


Because I have only just discovered this site, and had assumed the youtube videos of rockets from metal I had seen were the only way to do it.

Logan Jonker
Posts: 17
Location: Missouri
posted 6 years ago
Well your design is a good start- After I finish my outdoor heater, I'm hoping this spring to make a rocket oven for baking.

Can you set up your oven in a permanent location or do you have to move it around? If you can stay put, check out the Beehive, double chamber pizza ovens. The flames shooting 5-6 feet out the top would definitely attract attention (of course that is only the heating time) Then you've got about 8 hours of cooking time after the wood burns out.

I'll look around for the video, a cursory search hasn't showed itself yet, but I'm 70% sure I saw it through the forums/site.