The longer burning woodstove (inside an existing central water-heater)

Igor Ugrinovski
Posts: 3
posted 8 years ago
Many of us have the need for a high power output burner. And we all want a stove that doesn't have to be fed often, but is still efficient/clean.
So, during my efforts to stay warm, a design that encompasses some features from the "rocket", "turbo" and "downdraft" stoves, has presented it's self. I've been using (and tweaking) it for some 10 years now, to my great satisfaction. It gives a strong, clean and a very long lasting fire, so it's quite low on maintenance (feeding). 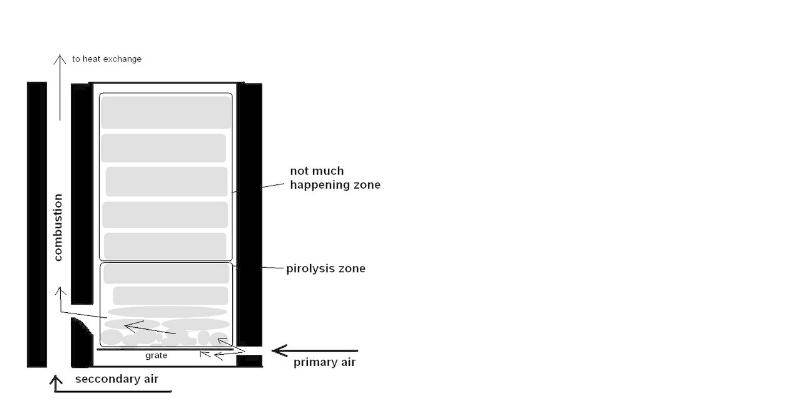 It's basically a rocket stove (or maybe it's a gasifier, but let's try to explain it as a rocket stove), with an over-sized loading chamber that is airtight and fed only desired amounts of air at a low point in the chamber, and an under-sized rocket chimney that is fed additional (secondary) air from below. The rocket chimney is a much smaller horizontal cross-sectional area then the loading chamber (more like 1:5 to 1:10, then the usual 1:1 in the "conventional" rocket stove). By making the loading chamber airtight, the separation of gases from the firewood can be (somewhat) controlled by the primary air intake. It means one can "turn the stove down" a little bit, while not compromising efficiency. The smoke produced has to pass through the hot coals, thus collecting heat, and then gets additional air to combust in the secondary chamber (refractory internal chimney, or " the riser"). The burned out, hot (and presumably clean) gases can now be directed to the desired heat exchange.
Since the primary burn (pyrolysis) is happening in the lower part of the stove's loading chamber, quite a lot of firewood can be stacked in the loading chamber, but it will not burn as long as it's in the upper parts of the loading chamber. As the firewood in the lower part burns out, gravity feeds new logs from the "not much happening" zone, to the pyrolysis zone.
It is my opinion (with some experimental experience) that feeding the primary air from the top of the loading chamber makes it highly probable that the fire will spread upwards to meat the air, therefore igniting the firewood in the upper parts of the chamber (the "not much happening zone"), which will result in ALL of the wood in the stove starting to gasify, thus suffocating the riser and killing the clean burn. It also makes it easy for the stove to back-fire on start-up, since it's the fastest way out (especially on those "lovely" warm days with no wind, that create reverse draft in the chimney). That is why the air is fed at a low point in the stove.

I have my burner fitted inside a central water-heater that connects to all the radiators around the house. The burner is made out of fire-brick, cemented with fireproof cement (it is rather difficult to lay bricks while working through a small opening like the loading door, but it's doable). It gives a wonderful, hot, clean fire that burns like that for hours. I know it's hot, because of the color (yellow with tints of blue). I know it's clean, because when it's not, it smokes up my inspection window. I just load the stove with a whole bunch of wood, start the fire, wait a minute for it to catch up, open and adjust the secondary air baffle and leave. It will burn with a strong flame for 2-3 hours, and leave a bunch of char that can simmer for hours after that. I usually need to load/fire one batch a day - early and late in the season, and up to 4 batches a day - when it's the coldest. The firewood can be put horizontally and/or vertically, it doesn't matter, it burns the same.

The drawing is simplified (and very bad, I know

), it doesn't show air baffles, loading/maintenance doors, ash collection, etc.
I will try to upload some photos and videos as soon as I can.

posted 8 years ago
Igor Ugrinovski : In checking back just now I have discoverd that my previous post went missing in a recent kerfluffle I enjoyed your post very much, can we
have pictures ?! Big Al

R Scott
pollinator
Posts: 3893
Location: Kansas Zone 6a
228
posted 8 years ago
Maybe a magazine-fed rocket? It appears to run like a gasifier that will burn large feedstock. That could be a very useful thing. 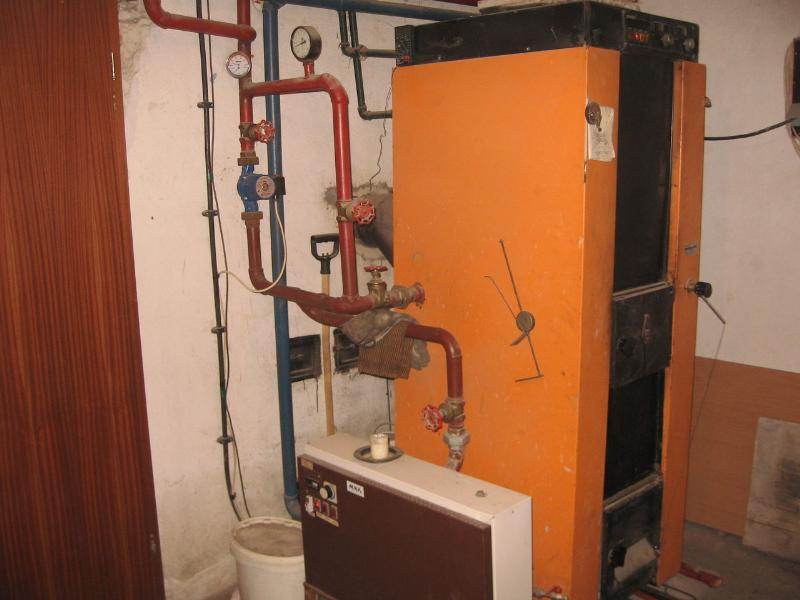 The actual water-heater. You can see the top and bottom door. The top part of the heater (above the upper door) is a hot water reservoir (boiler?) connected to the house plumbing and provides hot water for washing. Which means that the loading chamber of the stove is as high as the top of the upper door. 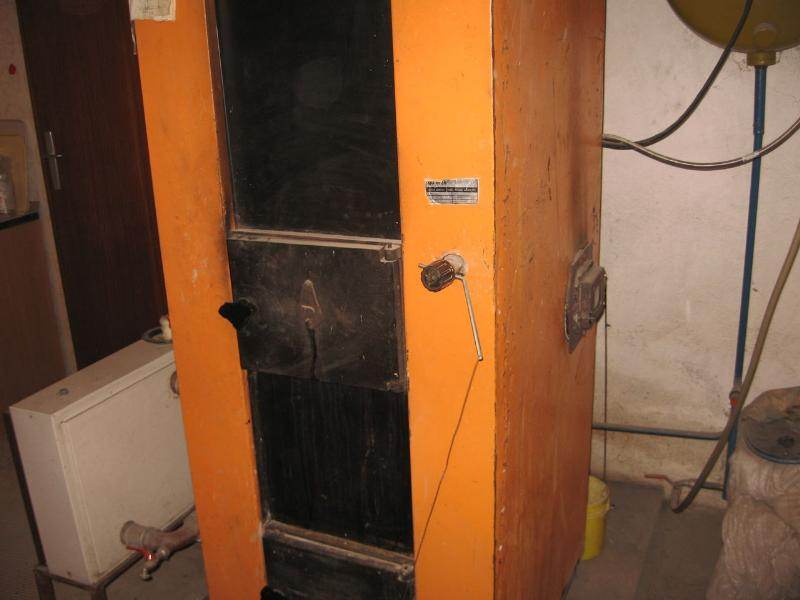 The water-heater from the left side, showing the inspection window (actually a hole for fitting an oil/gas burner, that served great for a window). 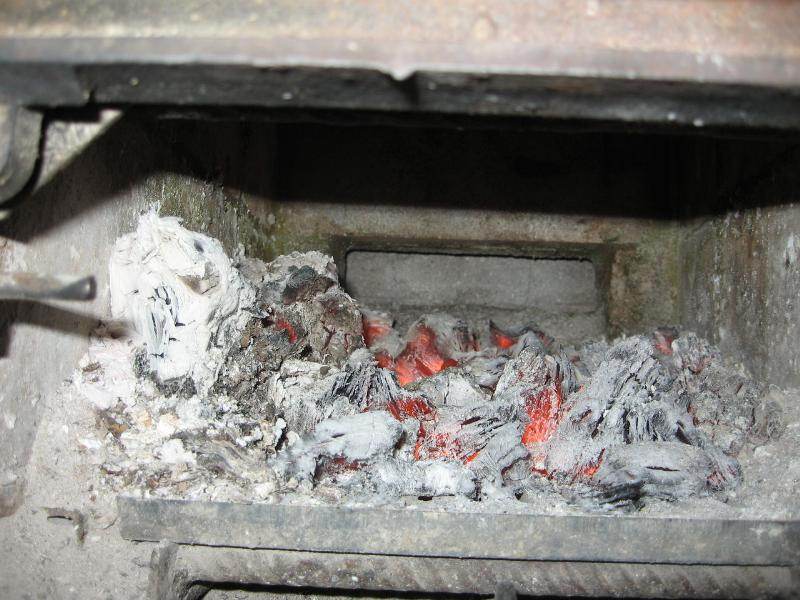 View from the lower door. The hole leading to the secondary combustion chamber is visible straight ahead. This is at the very and of the burning cycle, it's about time for a new batch (if needed) to make use of the remaining amber. 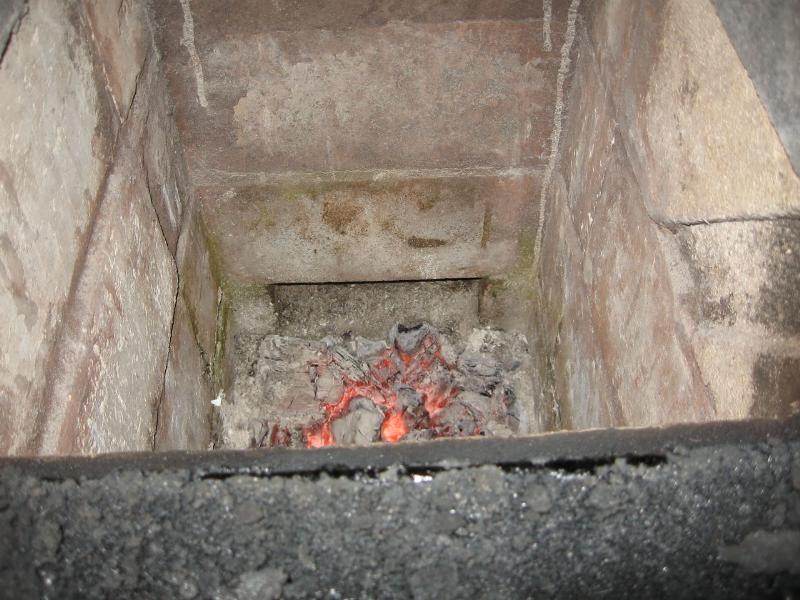 The same hole, only seen from the upper door. This is the loading chamber. It's four bricks high (50 cm), plus some 30cm made of vermiculite plates (seen in the next photo, the sides, above the nails), that can be taken down for maintenance. 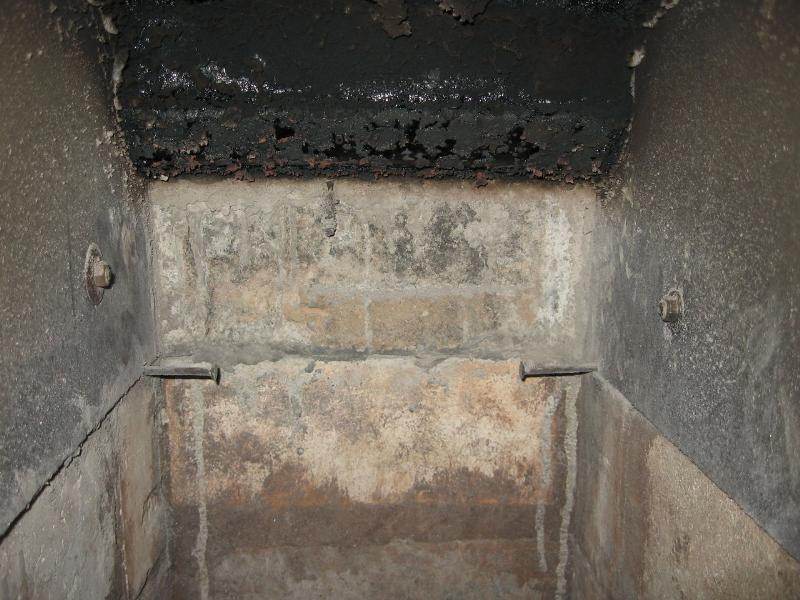 Same door (upper) only not looking down, but straight ahead. Behind these bricks (ahead) is the secondary chamber (the internal chimney, the riser). 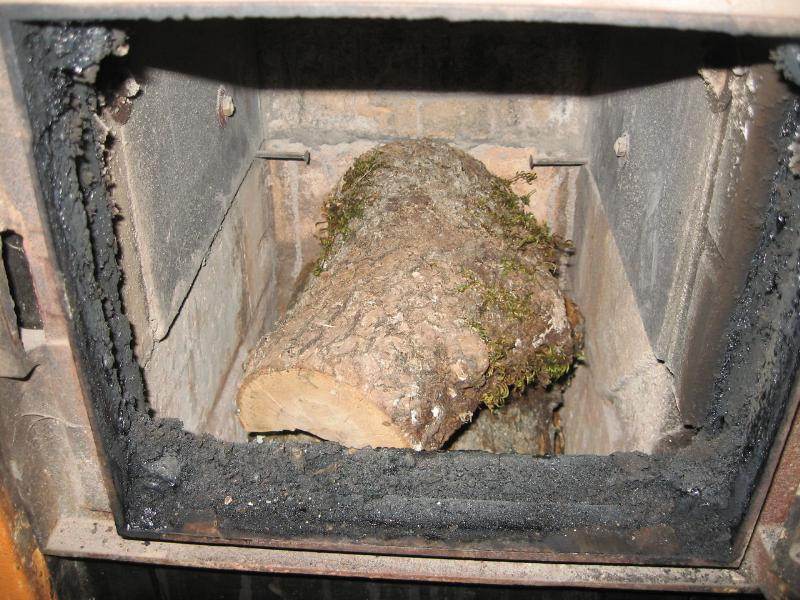 Chamber loaded with firewood. It can be packed to the top, only those nails are in the way (they do serve a purpose, though). 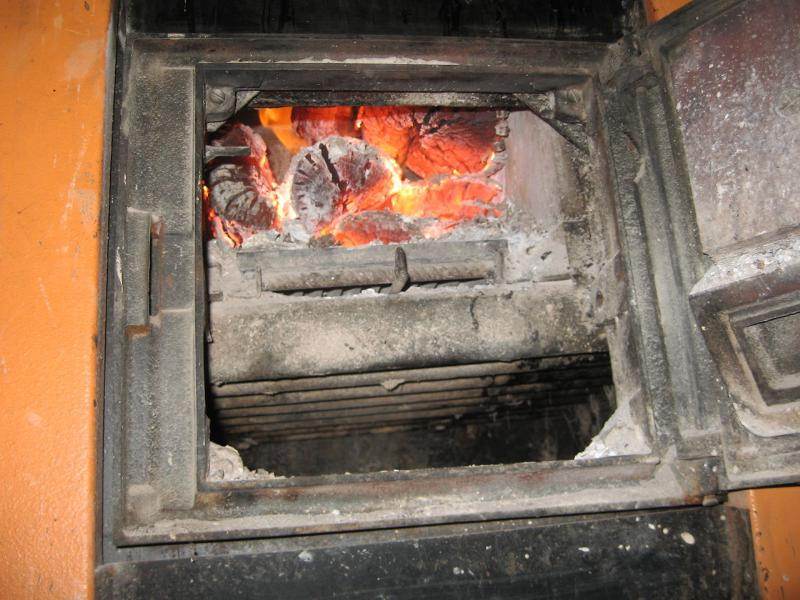 Fired up and running (lower door, low angle view). Right in the middle you can see this "thingie" that is used to control the secondary air. 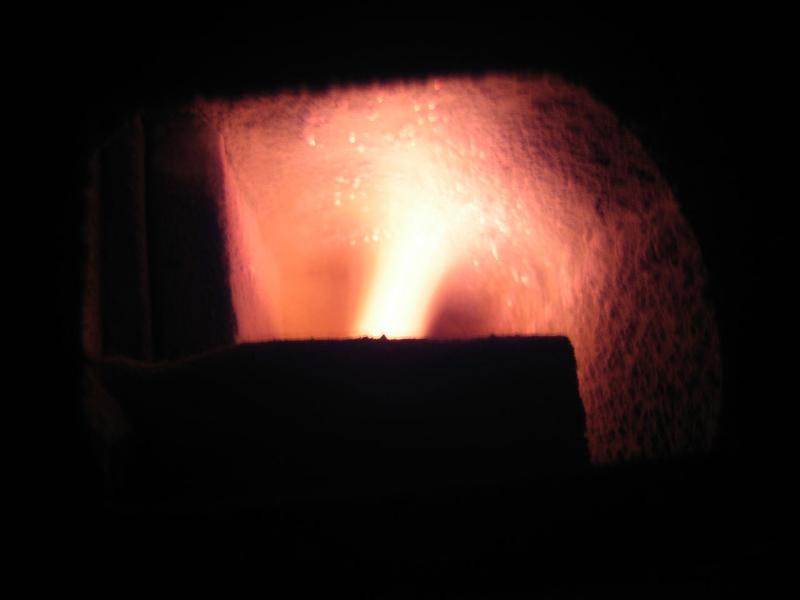 The end product, some serious fire spitting. This is seen from the so called inspection window. 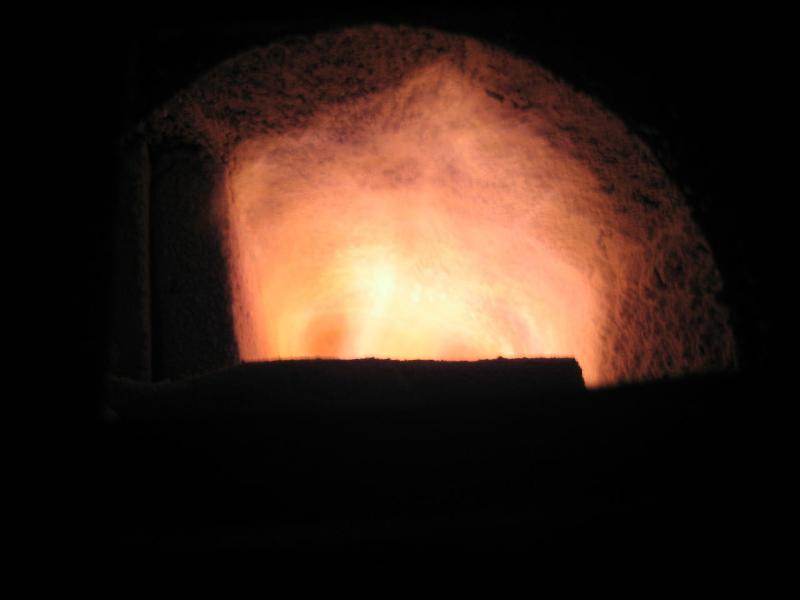 Fire saying: I love my yellows and my blues!
The camera doesn't do it justice, though.

Edited my moderator to remove spam links kindly provided by your image hoster. I'd strongly recommend anyone *not* to use postimage.org