The Stirling Engine at Tamera, Portugal

posted 7 years ago
I posted this in my thread about Tamera and their Water Retention Landscape, but I thought the Stirling Engine was worth a thread of its own so I've posted it here too.

When my son and visited Tamera last year we took the opportunity to have a bit of an explore around their solar village.

Here's a video to introduce you to what it's all about.

Their Stirling Engine intrigued me - I was convinced that Caractacus Potts was hiding around the corner and that Chitty Chitty Bang Bang was about appear and take off into the distance. All that shiny tin-foil and those bright colours made it a bit hard to take seriously, but this is in fact a real live working Stirling Engine.

And despite my suspicion of all things overly-shiny I ended up pretty impressed by the thing. 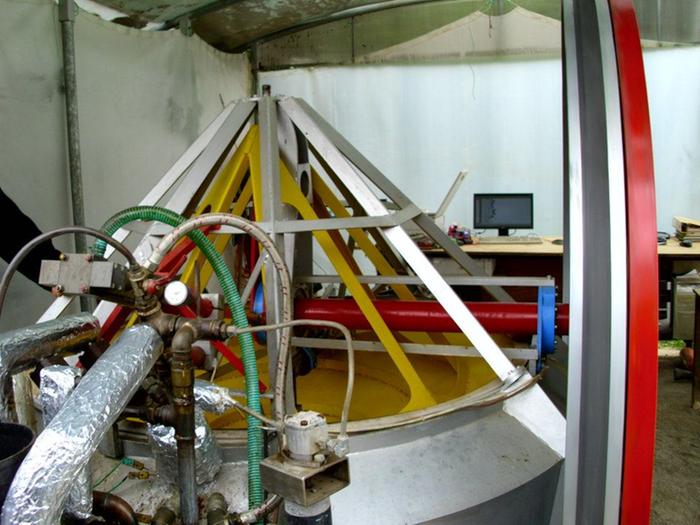 For those of you who, like me, aren't really sure what Stirling engines are all about and have a bit of a mental block about all things physics related, this video might help explain.

And for those who want a bit of a deeper understanding I did manage to get my head around this video after watching it a couple of times.

This video below shows an experiment using a fresnel lens to focus sunlight to provide the heat to power a mini Stirling Engine.

The SunPulse Electric Stirling Engine at Tamera is basically a big, working version of this experiment.

The heat to run the SunPulse Electric Stirling Engine is provided by the Sun using a specially adapted greenhouse, known as the Energy Power Greenhouse, seen here in the background. 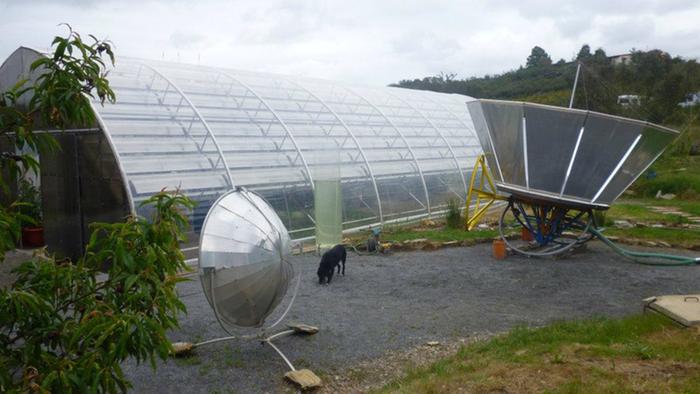 The greenhouse has an array of adjustable fresnel lenses which focus sunlight onto oil-filled tubes. 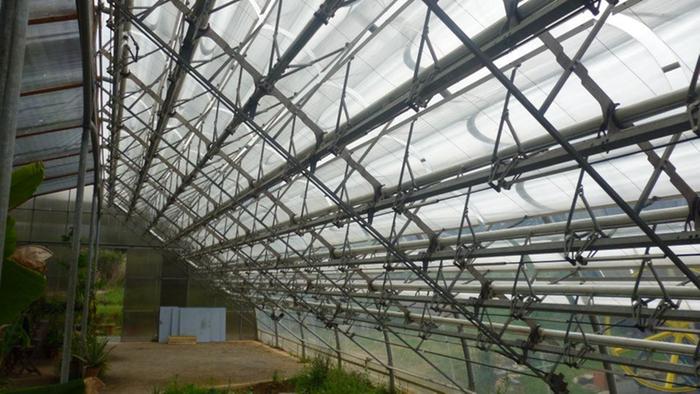 The oil heats up to around 220°C (428°F) and flows around a closed circuit to the Stirling Engine. 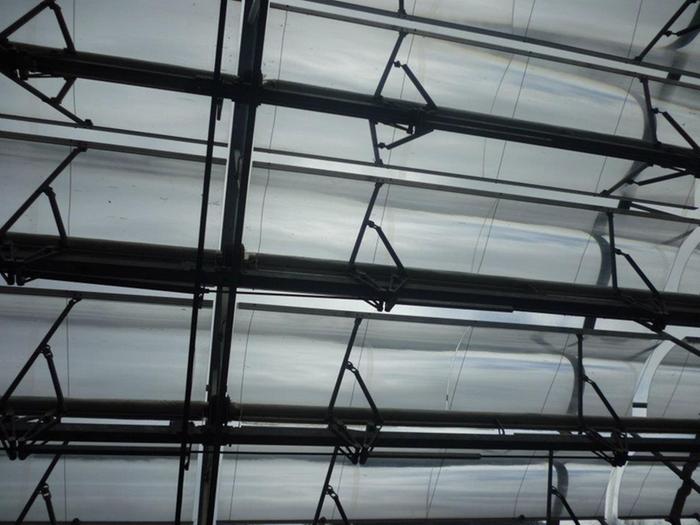 The hot oil flows from the greenhouse along underground pipes to the Stirling Engine. You can see the metal sheets which cover the pipes as they cross under the path.

Hot oil is stored in the insulated tank on the left of the photo. The heat from the oil can power the Stirling Engine, which can then supply either mechanical energy to directly power tools such as a grain mill or a saw, or can be used to generate up to 1.5 kW of electrical power. Portugal is know for it's sunny weather, but we do also have weeks on end of rain occasionally. The biogas digester acts as a very useful backup energy supply during rainy spells. 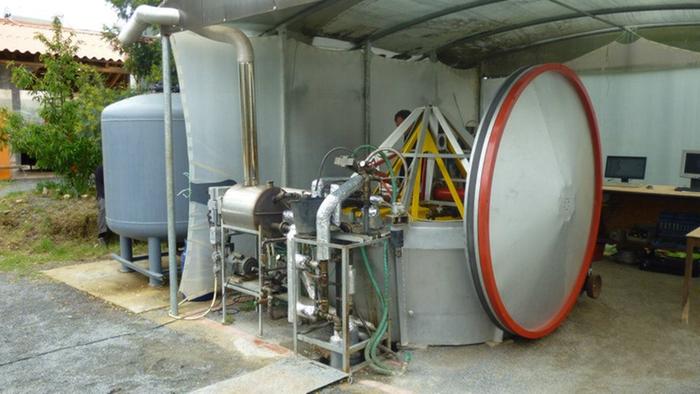 The hot oil is also used in the solar kitchen providing heat either directly, through double-walled cooking pots, or via steam. The stacking wooden boxes on the left are for steaming food, and the big brown box has 'hot pockets' which pans fit into, surrounded by hot oil. 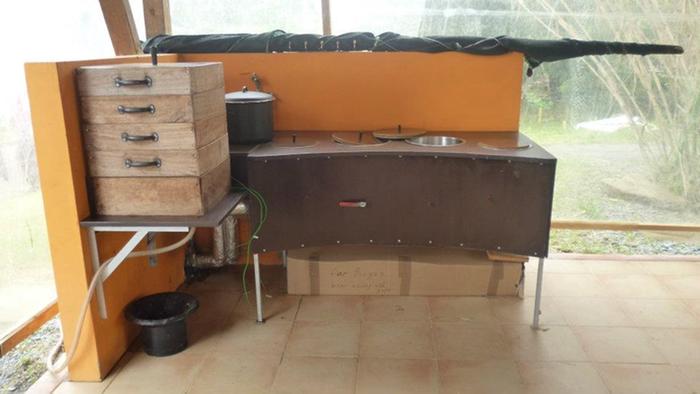 Normally in Portugal the sun is too strong and plants do better in shade, but now that most of the heat has been removed, the greenhouse is an ideal place to grow high-value plants. 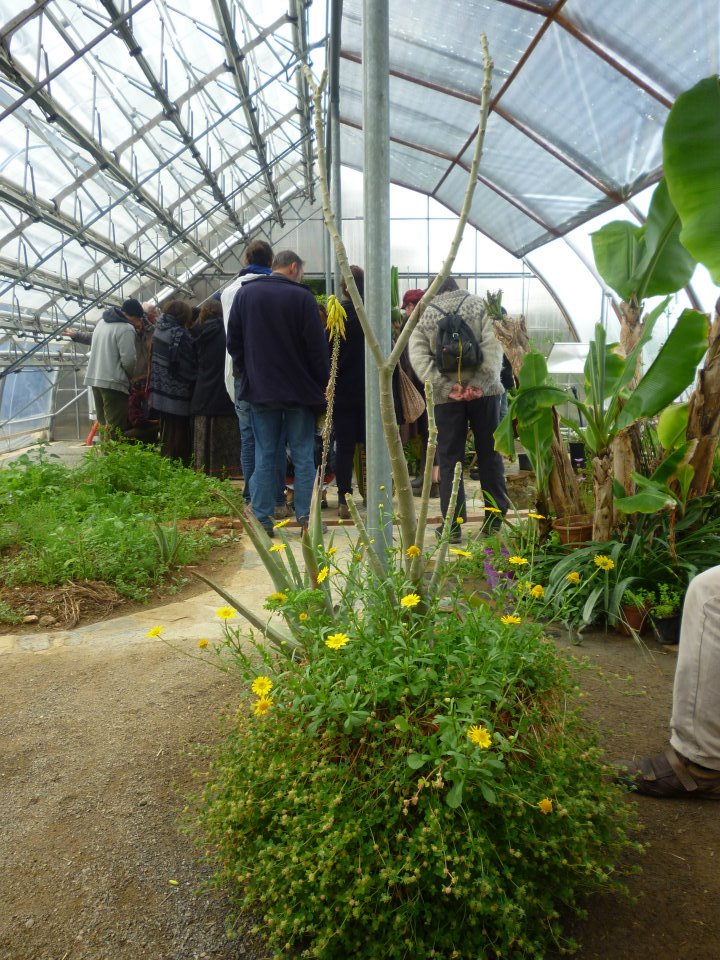 For more details on the system, here's a link - EPG (Energy Power Greenhouse) and SunPulse Electric

Nick Raaum
Posts: 33
2
posted 7 years ago
Hi Burra,
I've been keeping an eye on the sun pulse greenhouse energy system for a couple of years, unfortunately doesn't seem like they are going to be selling the units or plans anytime soon, so it still is pretty unclear what the financial feasibility is. That said lMO its an attractive way to approach solar energy, using it to produce electricty heat and food by capturing the full spectrum of the sun. The engine appears well designed too, its high volume, low displacement and operates at very low speeds and pressures. This produces optimal efficiency at those temps by reducing viscous drag losses (which can be very significant due to large volume low energy densities) and makes for a robust simple to build system.

One thing i'd love to know about that system is the cost of the fresnel lens capture system, and what if any sort of things had to be done to let through enough of the spectrum so that it was available for plant growth beneath?

I dream a fair amount about trying a similar DIY shot at an integrated greenhouse system like that one. I think though it might be easier to design a piston brayton cycle and work with heated air. Regardless the ideal of obtaining food, energy and heat from a greenhouse seems like a no brainer stacked permaculture principle that really should be pursued.

Jk Whitfield
Posts: 4
posted 6 years ago
Fascinating stuff, looking to perhaps make one of those DIY Stirling engines, sounds like a good waste of a weekend.