Dale Hodgins
Posts: 9002
Location: Victoria British Columbia-Canada
670
posted 6 years ago
There has been much debate concerning the merits of dense brick vs a more insulative material for the riser. While I can see the advantage of going light, I wonder if there might be some advantage to having heavy brick as a backer. Gasses that are rising, would only touch the perlite liner which would heat up quickly. As the flow descends toward the exhaust, it encounters the heavy firebrick. This should enhance the pumping effect during the beginning stages of the burn.

The only problem that I can see, would be that the materials may expand and contract at different rates. If a thin layer of foam or paneling were placed between the two refractories during forming, it would quickly burn out, to leave a small air space between the brick and cast perlite.

This may have been done to death, but I couldn't find it.

The photo. First the firebrick would be laid. Then, the wooden form would be placed. Four lengths of 2x4 lumber could be placed, to center the form in the space. The mix would be poured into one the spaces and tamped down with the spacer boards. The wooden form would be burned out, to reveal a nice smooth riser. If the cast riser needs to not be stuck to the firebrick, this could be achieved with a spacer material that will burn off.
IMAG4770.jpg 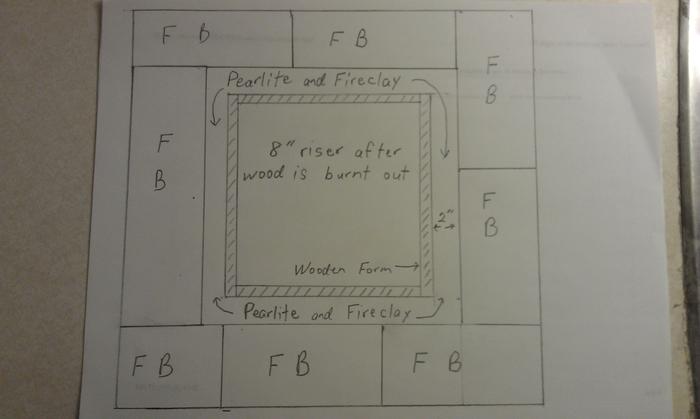 posted 6 years ago
Dale : I should set my alarm clock a 1/2 hour earlier so I can reread the Tread extension Erica Wisner Added to My " Fake Fire Brick?'' Forum Thread, every-time
I read it I find some thing new!

I am concerned that any Heat Riser liner should be at lest 4'' thick, and for longevity, probably be made of concentric rings stacked one on top of the other like
they were turned out of a Bundt Pan with a 6-8'' center! Obviously if we use a Rockwool bat or ceramic insulating blanket, that is not a problem !

I also note that the People at Dragon Heaters are going in the opposite direction and show you a rigid, or semi rigid board made of a formed Vermiculite board,
this seems to be the entirety of their Heat Riser, I am still having fun wrapping my head around that ! All off the above should get you the smooth walls we thing We want

Cindy Mathieu
Posts: 245
Location: near Houston, TX; zone 8b
3
posted 6 years ago
The heat riser is still part of the combustion system. Consequently, it needs to be insulated so that the fire stays as warm as possible. This is why we use vermiculite or other insulative board. These boards are both more insulative than even the softest bricks.

These design elements were tested by Peter van den Berg. His experiments and results are up on the Donkey Proboards.

Posts: 3241
Location: Southern alps, on the French side of the french /italian border 5000ft elevation
153
posted 6 years ago
Dale, i think this could cause more probs than good.

Imagine, your heavy firebricks will warm up during the burn. From the gases, but may be also from the heat released throug your perlite fireclay mix. And if thoses heavy firebricks heat up more than the gases which are cooling in contact with the barrel, they will warm up the gases again. Thus lessening the draft, tending to stall the pump effect. Even with a thick insulating between heat riser inside and and heavy firebrick outside, the gases exit the heat riser at temps between 800/1200C°which would warm the bricks considerably more than the 300/400C° absolute top temps that the barrel reaches. And the bricks would tend to release heat to the gases again, at the end of the burn, stalling the system again.

I would say i'm keener on the other solution. A kind of heat acumulating refractory on the inside, and lots of insulation outside. The idea behind this is a bit like a catalytic grid. The gases comming close to the boundary layer are heated a lot, and burned by that heat radiated by the dense refractory material. Acting a bit like a catalyser. I sometimes get a red hot fireclay heat riser. That's when the gases are burned the best i think.

I am concerned that any Heat Riser liner should be at lest 4'' thick, and for longevity, probably be made of concentric rings stacked one on top of the other like
they were turned out of a Bundt Pan with a 6-8'' center!

Allen, would you use fireclay to join sectional risers, or just grind them to a good tight finish and set them perfectly so that they can move independently ? I'm wondering if the fireclay would fuse them together, thus negating the benefit of going sectional.
allen lumley
pollinator
Posts: 4154
Location: Northern New York Zone4-5 the OUTER 'RONDACs percip 36''
61
I like...

posted 6 years ago
Dale : Like Ianto Evans I would like to go cheap where I can, I would think that firing them like a brick, and dipping them in clay slip and then sanding flat, level,
and smooth would create good seals, IF they fuzed together, any cracks would Probably form naturally in these joints between.

This is not an idea originally from me, see Alistair Warburtons Thread New to this … New heater? in Rocket Stoves, scroll down to the sketches - June 29th ?

Alistair wanted to use gaskets as a second seal, I was thinking that the gasket that are found under the cover of nearly every 5 gallon plastic pail and most 1 gallon
and bigger pails would ether take the heat or melt in place and make a further seal! A friend in the Baking Crafts uses about a thousand mixed buckets a year and
as more people want buckets than covers, strips out the gasket before recycling ! Big AL !

Dale Hodgins
Posts: 9002
Location: Victoria British Columbia-Canada
670
posted 6 years ago
This is the thread that Al referred to --- https://permies.com/t/26094/rocket-stoves/heater#248913 It's quite a read. When I look at high temperature refractories used in pottery kilns, they are generally segmented. The temperatures achieved in the making of ceramics, would indicate that these materials and methods should be adaptable to the RMH.

ZIRCAR ceramics has stuff that can survive the most extreme environments. They do custom orders. Not something that I would order but a company like this could certanly make E&E's cores and get it right every time. http://www.zircarceramics.com/pages/particulates/ib100flue.htm

Here's a link to their site --- http://www.zircarceramics.com/products.htm