need help with a well situation

Gilbert Fritz
pollinator
Posts: 1586
Location: Denver, CO
65
posted 5 years ago
I am using a piece of land which is not my own, so I don't know that much about it. There is a flat concrete slab two inches above the ground, and running at least four inches into the ground. It is about 3 feet by 5 feet, and is very crumbly on top. The owners say it is a 'cistern.' However, there is no structure nearby, and no inlet pipe. There IS a very high ground water table. So I am thinking it is actually some sort of shallow well. Apparently the concrete slab was put in place by the local government 15 years ago, as they said the 'cistern' was a hazard. There is no access, electrical lines, or pipes that I can find.

So what is likely going on under there? A concrete lined shaft with some sort of pump in it? Some sort of pipe, with the cover being much bigger than the pipe, to keep storm water out of it? The owners don't know. Would it be worth getting a concrete drill and boring a hole? Or would I just run into some dirt because the slab is just hiding a pipe somewhere, not a cavity?

If there is water in it, how would I go about testing it? All the testing directions I have seen assume that water would be coming out of a tap. Lowering a bottle seems likely to pick up contaminants which would screw up a test.
Jennifer Wadsworth
Posts: 2679
Location: Phoenix, AZ (9b)
189
posted 5 years ago
Any way of getting ahold of local property maps that might show this feature or getting a local utility company to investigate? Perhaps contact the water dept?

Gilbert Fritz
pollinator
Posts: 1586
Location: Denver, CO
65
posted 5 years ago
Local maps don't show anything. I have the plot plans and a flood plain/ contour map, both up to date, and neither show anything. I would doubt the water department would know, since whatever it was, it was built by the owners before the current ones.

That is the problem; I have no notion what is down there! Also, the term cistern is rather confusing.

The previous owners are dead, so we can't get any information from them.
Jennifer Wadsworth
Posts: 2679
Location: Phoenix, AZ (9b)
189
posted 5 years ago

Gilbert Fritz wrote:The previous owners are dead, so we can't get any information from them.

Why did I just flash on some kind of permie séance??

How about the neighbors - would they have any historical knowledge? Anyone else in the area have one of these?


Gilbert Fritz wrote:Apparently the concrete slab was put in place by the local government 15 years ago, as they said the 'cistern' was a hazard.

What arm of the local government did this, do you know? They might have a record of what it was/is if they demanded it be covered. I do wonder if it's covering a void or just on top of the ground. If it's crumbly with no sagging, it might just be a slab of some sort. Got a picture of it?

These can be very dangerous to work around!!

Second, you may need town approval as well as the land owners to modify a "cap stone" (even if it is concrete.)

What do you need the water for...domestic or garden? Is there another source that is easier to get to? How do you plan to access the water once you have gone through all the trouble to uncover it?

Testing is strait forward and will be in the format the chosen lab requests...line the lab up...and ask them how they want it. Usually in a small bottle. I would check with your local water authority if you have one, and/or a state Hydrology department.

j
Gilbert Fritz
pollinator
Posts: 1586
Location: Denver, CO
65
posted 5 years ago
Here you can see the slab. The best picture I have right now. The part of the slab facing us is seriously eroded and crumbling; it looks like a heap of gravel, but is still solid inside.

I doubt that this thing is regulated or approved by the city.

The water would be for gardens; Assuming it is a shallow well, I would be getting a pump from Lehman's which can be chucked onto a cordless drill, and can raise water twenty feet. There is a creek nearby, and another neighbor has a shallow well, which he uses to water his lawn.

The owners might know which government department it was. They did not watch the process. And they don't know what exactly it looked like before hand. So I am guessing it was not a gaping shaft. That would have been rather hard to forget.
IMG_0720.jpg 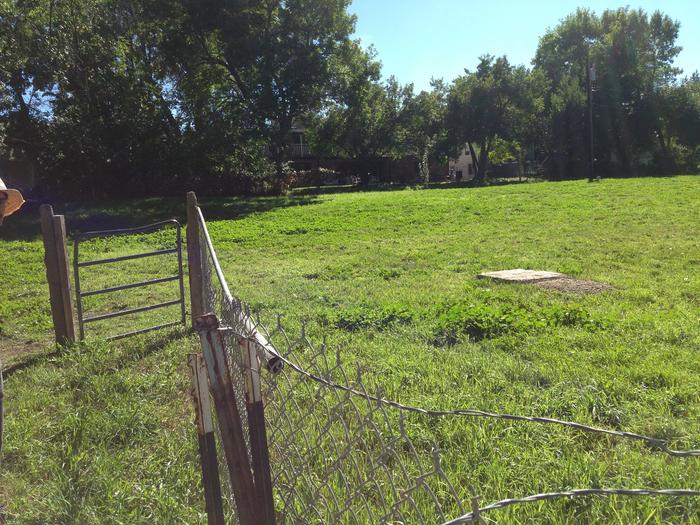 Jay C. White Cloud
Posts: 2413
46
posted 5 years ago
O.K. if you got everything lined up in the way of permission, you will need to remove the cover, and make a new one. This was covered for a reason, as animals, kids, and silly folks like me tend to fall into them. (Children have fallen into 8" wells before.) So first this is to build a nice little well house or cover that you can easily remove. Second the "drill and bump" sounds good...but doesn't last very long...especially if you need more than say 5 gallons of water a week and have the patients to pump it up... I have seen this tried several times and the just burn up the drill or pump both if used on a regular basis. A deep cell 12 or 24 volt system with solar could serve you better or just an old manual hand pump. A fulcrum stone and pry bar should get the cover off and to the side. We just moved a 1 meter square 100mm thick one last week...heavy but doable..
David Livingston
pollinator
Posts: 4328
Location: Anjou ,France
242
posted 5 years ago
Just a thought is there any history of mining in the area ?
I wonder if its an old well with a brick or concrete lining that used to have an old hand pump at the top . I have seen these quite deep and a danger to livestock and people when the lining decayed or the capstone gave way .

R Scott
pollinator
Posts: 3469
Location: Kansas Zone 6a
56
posted 5 years ago
If it was capped "properly" it will be full of dirt inside. To minimize the danger of collapse.

Usually they were a brick lined structure looking about like a giant milk can.

I would not look in there alone just in case something goes wrong.