Jennifer Wadsworth
Posts: 2679
Location: Phoenix, AZ (9b)
194
posted 6 years ago
First there was the massive haboob (dust storm), and now it's raining like crazy mixed with a tiny bit of hail for just a second.

Too bad it's dark - I'd love to see if any water is running off my property into the street. My guess is that it's NOT - I've never seen it run off ever since the installation of the earthworks. Thank you water harvesting earthworks!

posted 6 years ago
Woot! I think if it was me I'd be out in the rain with a flashlight checking my earthworks -- I don't think I could resist!

Judith Browning
Posts: 7693
Location: Ozarks zone 7 alluvial,black,deep clay/loam with few rocks, wonderful creek bottom!
1508
posted 6 years ago
good news, Jen! Does everything suddenly spring to life? and how did your earthworks do?
I know that I need to learn to appreciate our abundant rains here a lot more

Jennifer Wadsworth
Posts: 2679
Location: Phoenix, AZ (9b)
194
posted 6 years ago
Dan - I was tempted to go out there but I have some damage to my eyes that blowing grit would exacerbate, so I decided not to. It was HARD though, really hard not to go out in the "tempest".

Judith - the earthworks held up beautifully! I looked for patterns of water flow coming off my property - NADA! My one wish is that I could capture more of the upstream runoff in the planted areas along the road. The lower part of my 'hood gets flooded because of all the water, even in modest rains, that gets shunted out into the street. I look forward to my neighbor Donna's report on her end of the 'hood - the part that gets flooded. We are trying to encourage neighbors to build water harvesting landscapes all along that road to stop this flooding. We will get there! I also want to hear how the French drain we installed last fall worked.

The desert really smells great after a rain - it's an aroma like no other I know. Things look perkier and more lush. But - WOW - the humidity. Now I remember why I don't live in a humid climate! I have some HUGE hair going on today

Jennifer Wadsworth wrote:I have some HUGE hair going on today

That's me ALL the time!

Jennifer Wadsworth wrote:
The desert really smells great after a rain - it's an aroma like no other I know.

I second that, it is so addictive!
Abe Connally
Posts: 1502
Location: Chihuahua Desert
posted 6 years ago
very cool! We're waiting for rain, too, hopefully it'll be our turn soon.

Jennifer Wadsworth
Posts: 2679
Location: Phoenix, AZ (9b)
194
posted 6 years ago
Downtown Phoenix was lucky - most of the east valley (Scottdale, Mesa, etc) got nothing but the brunt of the haboob - and it was a bad one. The rain started in central Phoenix and then dumped on the west Valley. 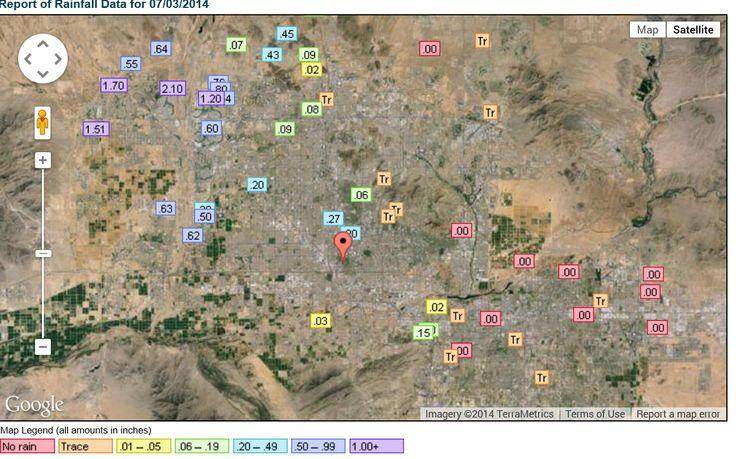 Ah yes, waiting for rain in the desert - I think it takes a drylander to appreciate the thrill of the building clouds and rise in dew point. What are your rain patterns where you are?

Jennifer Wadsworth wrote:
Ah yes, waiting for rain in the desert - I think it takes a drylander to appreciate the thrill of the building clouds and rise in dew point. What are your rain patterns where you are?

We typically get rain from June through September, the rest of the year nothing. We got a small trace in January this year, and a tiny bit in June, but the rains haven't come yet, and things have been suffering. Combined with one of the hottest Junes on record, it's been a hard summer so far. We've had clouds building for several weeks, but its not falling here, way in the distance it rains, but not here.

So yeah, we've been waiting since September of last year, and really watching and waiting for a good month of 110F temperatures.

oh, and I almost forgot, I left the valve open on the irrigation cistern last night and lost almost 2,000 gallons (2 months worth) of water. https://permies.com/t/37623/rainwater/Rainwater-Tank-fail-safes

Jennifer Wadsworth
Posts: 2679
Location: Phoenix, AZ (9b)
194
posted 6 years ago
Ugh - that sucks about leaving the valve open. At least I live somewhere where I can turn on the tap and get water reliably (at least so far).

My rain total for 2014 is about .75 inches. Hoping for a good monsoon season. Typically we get about 4 inches in the winter and 3-4 in the summer. Winter was DRY this year. However, scientists think we may have a strong El Nino year which usually means a wetter than average summer monsoon for us in Phoenix. Fingers crossed!

Abe Connally
Posts: 1502
Location: Chihuahua Desert
posted 6 years ago
yeah, I think we got 0.25 inches this winter, which is considered a really wet winter for us.

I hope you guys get a nice strong monsoon, and I'm hoping the same for us. We could all use it!

Jennifer Wadsworth
Posts: 2679
Location: Phoenix, AZ (9b)
194
posted 6 years ago
Yeah - we've been taunted by virga a few times this year - so maddening!

How much rain do you guys get during the summer? I'm interested in knowing how you size your tanks and plan your watering schedule. Do you only get rain when the temps are over 110? Usually ours comes around 106 it seems.

Abe Connally
Posts: 1502
Location: Chihuahua Desert
posted 6 years ago
we average between 20" and 25". We only get rain when there's moisture coming in from the Pacific across western Mexico. We can get it at different temps, but the moisture has to have enough force to make it over the mountains.