Russell Olson
Posts: 184
Location: Zone 4 MN USA
12
posted 6 years ago
So as much as I enjoyed the alfalfa and clover in my garden and specifically my orchard/food forest, the grass among the clover has remained a pain.
On top of that, the mosquitoes this year have been bad up here in the northwoods, they love the tall grass/clover and I've resorted to mowing a few times to keep life in the garden bearable during the cool dusk working hours.

I saw the Permiculture Orchard discussions and plan on ordering the video this winter, but specifically the plastic mulch used around the trees was interesting to me, more as a concept than as a plan. I'd rather not use plastic, simply because I'm sure I'll make a mess of it and be picking it out of my garden forever.
The concept though, of an impenetrable weed/grass barrier with "portholes" to plant into and allow for water/nutrient flow into the soil made alot of sense.
I can weed a small amount of "portholes" more intensely than a whole orchard. Sheet mulching would work but requires a ton of compost/leaves/straw/cardboard.
I've used wood chunks as mulch before, that's seemed to work well, but the weeds find a way through the odd spaces and irregular edges without a barrier beneath them.

My idea, call me crazy:
I have plenty of dead logs, elm, poplar, cottonwood, white pine, black cherry. Mostly semi rotten, some fresher but not great for much but firewood or hugels.
I could cut 1-2'' rounds off the ends of these 12-24'' logs, processing a 10' log would yield 60 "rounds" that would cover 720-1080 square feet.
Something like Paul's Duke medallion up at the top of the page.
They'd be impenetrable, they'd slowly rot into the soil, they'd have 3-4 inch "portholes" I could plant into and mulch with leaves or compost.
This is like a sheet mulch but with a solid wood layer rather than a cardboard one.

I think I could even square off one side of the original 10' log and make a straight side to run along my fence and planting beds. I could square off two or more of the sides if I want a more impenetrable "paver" look.
I also could drill a hole in the middle of them and pound a wooden pin from a stick through them to hold them in place.
If I put them down in the fall before the snow I'd bet they get sunken into the ground enough to stabilize them for walking on, even if not I could more intensely culture the white clover and alfalfa in a specific walking path and remove the mowing from the equation.

2'' of solid wood rounds that's being weeded, mulched and planted should remain for several years, long enough to grow some chop and drop nitrogen fixers and increase the fruit tree canopy.

Anyone try this? I think I could really free up weeding/mowing time that could be better spent elsewhere with this.
What am I missing?

posted 6 years ago
My only negative is you might be trading mosquitos for fire ants. It seems like anything laying on the ground (in my area) becomes a home for them.

Russell Olson
Posts: 184
Location: Zone 4 MN USA
12
posted 6 years ago
No fireants in Minnesota, really no insects that bother people other than mosquitoes and ticks, both love tall grass.
Cj Sloane
pollinator
Posts: 3738
Location: Vermont, off grid for 24 years!
103
I like...

posted 6 years ago
I had the same thought after watching the Permaculture Orchard. I did saw some rounds off logs that have been laying around but they're a bit punky/rotten so I bought some 10" "red rot" boards from the local lumber mill for .35 board foot. Then I cut 1" circle out of the middle and slipped them over my new saplings. I also have lots of older boards laying around and I've been cutting them up. That gives me a 1 foot perimeter I can weed whack around.

Russell Olson
Posts: 184
Location: Zone 4 MN USA
12
posted 6 years ago
Well, I had a bug in my brain about this so this evening I did it around a small tree.
A few thoughts:
As with anything it would be easier to plant into than to setup around existing trees, the spacing wasn't even resulting in some bigger "portholes" than I'd like.
I put down some cardboard before adding the rounds which were about 18" across poplar that was semi rotted, I used some of the sawdust I made from the chainsaw work mixed with wood chips, bark bits, and stick pieces as filler until I figure out what to plant around the fruit tree, topped it off with a good compost dusting and hosed it down good. Total of 1 hour work, maybe mulched a 7' x 4' strip.


It looks nice, right now it seems like it will work well, I'll update and maybe try to upload my first pictures here.

Jen Van
Posts: 48
posted 6 years ago
I think it's a great idea...I'm in Minnesota and use half logs and rounds as fun "steps" for our four year old. Last years sunk into the ground and started to decompose. All grass that was under them is gone now, so I removed and allowed the natives to grow in. Made new "paths" and "pavers" for this year and expect they will help rid us of more grass and allow for our wild flowers to move in and flourish. The spaces under the wood are so fun for finding toads and bugs! Let us know how it goes for you! **one more thing--I did notice some kind of fungus (I think) on a couple of the logs from last year (I grabbed them out of the deep woods full of buckthorn and wet soil) and nothing grew in those spots once I removed them...not sure if there is a correlation but I was wondering if the old rotting wood brought something not too nice with it that prohibited growth...I've left those spots bare now hoping the sun and nature will balance out the soil and get things growing again next yet...something to consider I suppose
Angelika Maier
pollinator
Posts: 1432
Location: cool climate, Blue Mountains, Australia
22
posted 6 years ago
It seems to me like a luxury version of an orchard mulch and heaps of work. I would put cardboard down first too and then a layer of mulch that the logs lay more evenly.
You could give me the logs for heating too....
In the end the weeds come up in the gaps no matter what you are doing. I second the pain with the grass. I tried a similar thing with clover and half of it was grass. However on an orchard scale does the grass bother you? I know it is said not to be very good for the trees, but traditional orchards always had grass.
The other things what you can do is if the orchard is big enough and you have full sized trees, put a fence around and some sheep in. They will fertilize and keep the gras short. If the orchard is small, put a better fence around and throw some chicken ducks or geese in. It saves you a lot of fertilizer.

posted 6 years ago
This is an interesting idea, I'd love to see photos.

I've used boards for paths in my gardens. They do sometimes attract ants. I don't mind ants except when I suddenly realize that I'm in the middle of a disturbed nest.

posted 6 years ago
Here's what I did to protect a Honey Locust I started from seed this year:


And here protecting some saplings:


I figure when they out grow the hole I can take a chisel to it and the board should split easily. If it keeps the grass away from the very small drip line it'll have been worth 30 cents (free for scrap wood).

Russell Olson
Posts: 184
Location: Zone 4 MN USA
12
posted 5 years ago
I've been impressed by the roundwood mulch, although the gaps do allow for some weeds poking through, it has been a good barrier for my orchard and small trees.
image.jpg 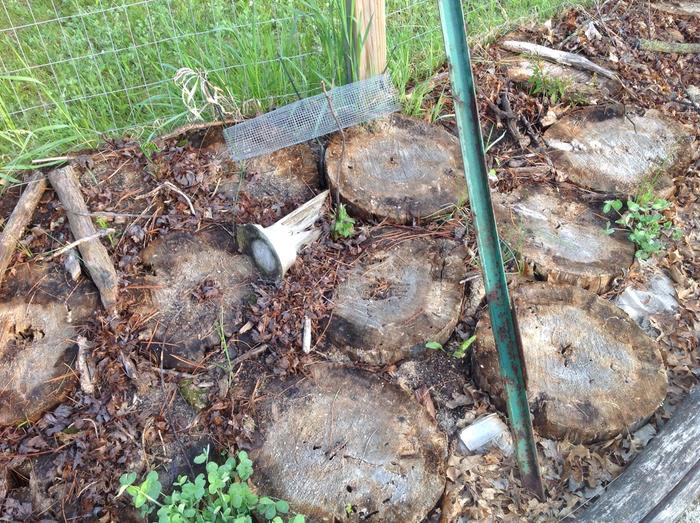