Terry Sommers
Posts: 4
posted 8 years ago
I made a rocket powered pizza oven and tried it out for the first time yesterday, and though it makes a great oven, it is not yet a pizza oven, as the temperature is about 150 degrees f too cool. I need at least 600 degrees, 700 is ideal, but the dome temperature was only 450 at the most, and the floor was only 550 at the most. The door is made to accommodate pizzas, basically 8 inch height, so a loaf of bread isn't going to come back out. Besides, i am a pizza business, not a bread business. I figure that the problem can be fixed by creating a better rocket, as the one i am using now most likely isn't very efficient. I'm quite sure that my oven cooking space is very efficient, but i just need more raw energy to heat up that insulated mass. It's cool enough after 3 hours that i can touch the sides of the cooking space, while inside it is 400 degrees. So, my plan is to cast an insulated refractory j tube. The j tube is mainly to reduce the work of feeding the fire, letting gravity do the work for me and freeing me up to deal with customers and making pizzas. I will use perlite in the calcium aluminate cement with a bit of sand. also, i will insert a copper tube with a valve at the intake for the purpose of delivering oxygen further along the burn tube, and i can regulate the oxygen flow with the valve. The copper tube will run along the burn tube to heat up the air, ideally coiling around it. also, i will create a vortex in the riser, as i have read that this increases efficiency. Then entry to the oven is a 10cm square, capped by a diffuser, which is topped by the cook floor. The hot gas is forced to the back of the oven, then rises along the dome, then before the door, is forced up an internal chimney which takes the hot gas back over the dome, but the other side of it, and finally to the chimney and out of the oven. the chimney and dome are also well insulated, and can be further insulated with a ceramic fiber blanket. However, i know that since the cook floor isn't even 600 degrees, despite its proximity to the rocket gasses, the blanket will still not bring me any closer to a rocket powered pizza oven. The internal dimensions of the cook space is roughly 40cm by 40cm, following the .62 ratio of door/dome height. Again, what i need to make this thing work is a more badass rocket. I know i could make another rocket and have the two of them going side by side, but that will take more retro work on the pizza oven part. So, I WANT TO FIGURE OUT HOW TO MAKE A BETTER, ROCKING ROCKET. any Einsteins of the rocket world here to lend a mental hand? Thanks!

Posts: 3454
Location: Southern alps, on the French side of the french /italian border 5000ft elevation
180
posted 8 years ago
So, here yougo! 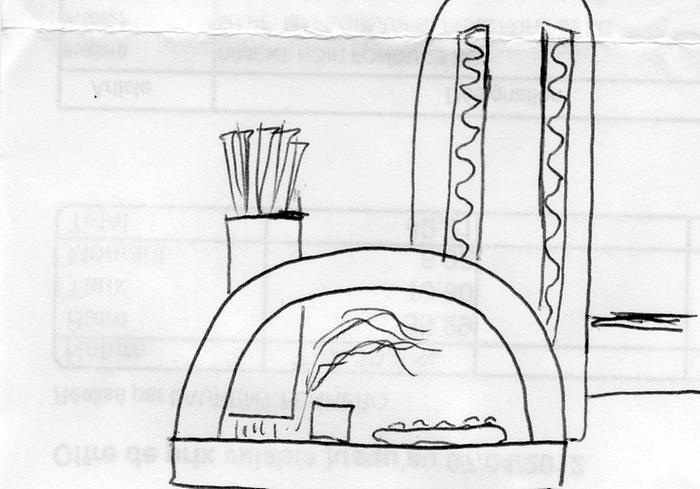 posted 8 years ago
Max, looks like that's a hotlink to an image at donkey32.proboards.com, but it's not working. Says you have to be logged in to view images. Maybe move it to photobucket (or similar) and link to it there?

posted 8 years ago
Howdy Terry, welcome to permies!
Here is my favorite video of a rocket pizza oven design. Maybe it will help?

Also do you have any pictures of yours?

Posts: 3454
Location: Southern alps, on the French side of the french /italian border 5000ft elevation
180
posted 8 years ago
Miles, i'm affraid that design might be a smidge weak for a pizza oven.

Top chimney is a bad idea, the heat goes out through the chimney. And i think the L shape rocket is tiny for a pizza oven. JMHO

posted 8 years ago
Thanks Satamax, I really have no idea about it being better or not , just seems like a cool idea.

Do you know of any other videos that show a better one?

Posts: 3454
Location: Southern alps, on the French side of the french /italian border 5000ft elevation
180
posted 8 years ago

Miles Flansburg wrote:Thanks Satamax, I really have no idea about it being better or not , just seems like a cool idea.

Do you know of any other videos that show a better one?

His construction is quite nice. But that center chimney is plain wrong.

Pizza ovens have a low door, with the chimney above that door. Making it bell'ish. And the fire happening inside the oven. They reach 400c° usualy.

What i have drawn above, is a mixture between a pocket rocket and a pizza oven. Basicaly you have the usual pocket rocket feed tube going about 2 inches from the oven floor, made out of refractory stones. And i did a mistake, the insulated heat riser should go down nearly as much, to give a proper bell effect. I think this way it could work properly. Fire the oven door closed for a while. This, unlike a real pizza oven, can't function with the door open.

Another option would be to use a batch rocket below.

posted 8 years ago
So where is the door on the drawing? Under the stack to the right or on the front as if we are looking into the door?

And the door would be very short?

Posts: 3454
Location: Southern alps, on the French side of the french /italian border 5000ft elevation
180
posted 8 years ago

Miles Flansburg wrote:So where is the door on the drawing? Under the stack to the right or on the front as if we are looking into the door?

And the door would be very short?

Well, imagine it to be a cut drawing. But the door would be facing us. The door shouldn't be too low, since you need to throw pizzas in.

I imagine lighting a piece of paper or two under the heat riser. Then close the door. Then light the sticks, and let it heat a bit. I think the functioning wouldn't be too far from a pizza oven. Exept that it is less smokey. May be burns a smidge less wood. Door should be hinged to be able to be oppened and closed quickly. To stop smokeback. But that still leaves the problem of moving the pizza inside to cook it well on all sides! Making pizzas with a wood oven has been my job for a while, in the past.

Terry Sommers
Posts: 4
posted 8 years ago
thank you all for your suggestions. My problem is that the oven comes in basically 3 parts: the rocket, the bottom half of the cook space (which seats the cook floor and has the entrance for the rocket shooting directly under that, looks vaguely like a sink) and the dome/door/exhaust part. Since the chimney is housed internally in the dome, it would be impossible to make the hole bigger. I thought about adding a bigger rocket, and making the hole in the bottom half of the oven bigger, but it seems that there would end up being a bottleneck in the dome for the extra exhaust gasses.... or maybe that would be a good thing???. So, what i've decided to do is build a j tube rocket with a refractory cement perlite mix, cast in 2 halves, with ash pit and cleanout area, and in the riser, have a preheated input of clean air, just below the sawdust feed. I have a slow speed motor that will turn an auger (exaggerated screw) that will slowly press sawdust into the rocket riser at a 90 degree angle, and the idea is that the fresh air will help the combustion and diffuse the sawdust for a cleaner burn. I think in this way i can increase the temp of the cook chamber to pizza temp. I'll include the drawings and photos later, probably tonight. dthanks again! and i'll be checking in every day or so with progress reports

Miles Flansburg wrote:Howdy Terry, welcome to permies!
Here is my favorite video of a rocket pizza oven design. Maybe it will help?

Also do you have any pictures of yours?

thank you, i've watched those two vids a couple of times, somewhat the same approach, though my thermal mass is probably 1/3 or 1/2 of that, going more for insulation with only 1 inch of hard heat storing mass, the other 3 inches are insulative concrete. I reckon that with a good rocket, the thermal mass doesn't need to be too high, particularly with good insulation.

Terry Sommers
Posts: 4
posted 8 years ago
here's a diagram of my basic set up. My main questions relate to the j rocket design. the external size of the riser is 49 cm, the internal dimension of the riser, with the 5.5cm of insulative refractory cement/perlite is about 44.5 cm. so, using the ratios i've come across, the burn tube which is horizontal with the ground is around 22 cm long. Now, my big question is where should i locate my secondary burn? I'm thinking right near where it enters the riser, maybe 1/3 up the riser, i'm not sure. but it will be off-center so that it helps to spin the gasses and create a vortex. I'm thinking of putting in 2 secondary air inputs, with valves at the beginning of the tubes so i can precisely control the amount of air that is allowed in, or letting me cut it off completely. also, with an internal riser cross section diameter of 11 cm, should i have small copper tubes for the air intake (which would allow for heat tolerant valve controls), or do i need bigger diameter pipes for that?
and about halfway up the riser, will be the input for the saw dust feed. I already have a low speed motor to turn an auger to feed the sawdust into the rocket, and if i choose i can block off that entry. I can also adjust the speed of the saw dust feed motor, but only by about 50%. I can get the motor to turn as slow as 20rpm. So, what do you guys think of this? Oh yeah, and i have some questions on the burn section, the horizontal part. Should i make a venturi tube, then expand it gently before the riser, or just keep it straight? I'm casting this in 2 pieces, use a bunch of sand, cover with crappy vent tubing, then plaster over that so i can later add contours to the burn tube, riser, such as the venturi section, ash scoops, slight wings in the risers to help the vortex spin. 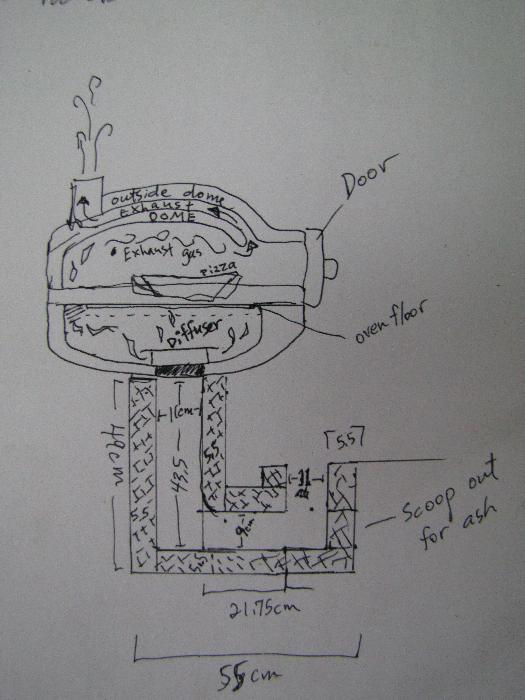 bernard boden
Posts: 5
posted 8 years ago
May be have a look at these pages 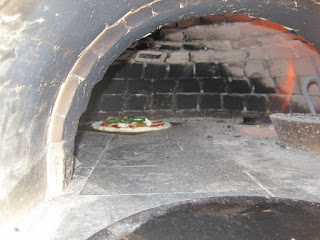 Jack Burke
Posts: 1
posted 1 year ago
Terry Sommers, did you ever get your rocket pizza up to temp? I have recently started plans to do something similar and stumbled onto this thread.
Cheers!
Satamax Antone
gardener

Posts: 3454
Location: Southern alps, on the French side of the french /italian border 5000ft elevation
180
posted 1 year ago

Jack Burke wrote:Terry Sommers, did you ever get your rocket pizza up to temp? I have recently started plans to do something similar and stumbled onto this thread.
Cheers!

Don't know if he did. But but among all iterations of my workshop heater, i've managed to make a working pizza oven.