Aaron Festa
Posts: 152
Location: Connecticut
1
posted 5 years ago
I bought tubers from whole foods and after two tears I have yet to see flowers from these sunchokes. Should I be concerned about the source of them? Also what do you do with them at the end of the season? Chop down? Or leave alone and let winter handle? Thanks
Patrick Mann
Posts: 310
Location: Seattle, WA, USA
5
posted 5 years ago
Whether or not you get flowers depends on the variety, your climate zone, and sun exposure. Here in Seattle, mine flower very late in the season, if at all.
If you are not harvesting the tubers I would cut them down in late fall. They tend to fall over when it's windy.

If they are getting shaded for any part of the day, that could be your problem. They are out-in-the-open, sun from dawn til dusk type plants. In the garden you have to think of what might be shading them at what hours of the day.
Jeff R Hodgins
Posts: 21
posted 5 years ago
My sun-chokes are all the same kind and I have noticed some mutated patches that do not flower, these ones produce way more tubers and the above ground parts grow taller and thicker. All are in full sun. Also the leaves look more like a sunflower they are wider and darker green. Going on for 2 years now with the same plants.
Cj Sloane
pollinator
Posts: 3738
Location: Vermont, off grid for 24 years!
102
I like...

Jeff R Hodgins wrote:...I have noticed some mutated patches that do not flower, these ones produce way more tubers and the above ground parts grow taller and thicker.

Huh! I had assumed the ones that didn't flower were duds or no tubers would've been produced. Guess I'll have to check on them.

posted 5 years ago
Ours flower very late in the year, if at all.

Tuber production is unrelated to flowering - they are not seeds.

Michael Cox wrote:Tuber production is unrelated to flowering - they are not seeds.

The other issue was that my sheep kept getting to them so I sorta thought they weren't getting enough energy but I guess like potatoes the stems & leaves might be enough. I'll report back later in the fall.

posted 5 years ago
Mine (also from Whole Foods) have not flowered yet either. But they are growing well and the best ones are seven feet tall.

posted 5 years ago
I couldn't help but to show these.

This things can really get TALL! I was amazed, is this normal?
I noticed mine tend to flower about September, mostly full sun. 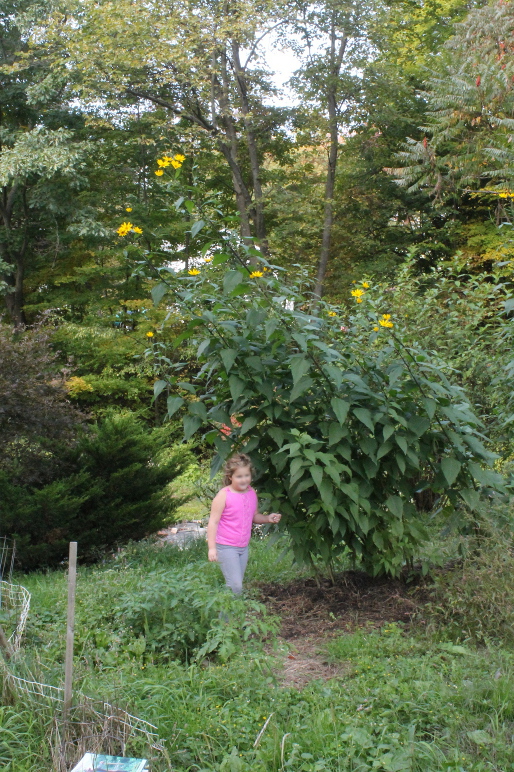 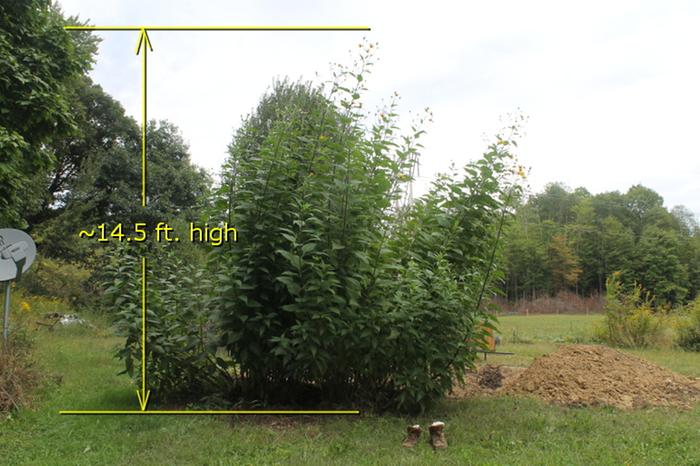 Mountain Krauss
Posts: 130
Location: Northern California
1
posted 5 years ago
Wow. I'd love to get some sunchokes growing that high on our farm. Anything special about that one?
Dan Boone
gardener

posted 5 years ago
That IS impressive! My best one is only about 8 feet tall and most are 5-6 feet.

Victor Johanson
Posts: 408
Location: Fairbanks, Alaska
28
posted 5 years ago
Stampede is usually considered the earliest of the named cultivars. I grew some here in Fairbanks back in the 80s and it bloomed the first year. I moved away, and they were gone when I came back eight years later. The last couple years I decided to try it again, so I got Stampede and about 10 other cultivars plus grew some from seed--nothing bloomed. I contacted Will Bonsall from the Scatterseed Project in Maine, and he confirmed that Stampede is his earliest. I got some from him, thinking that maybe what I got was mislabeled. I also read www.nordgen.org/ngdoc/plants/articles/Helianthus_tuberosus-Diversity_2010-1.pdf by Axel Diederichsen regarding the extensive collection maintained by the Canadian germplasm system. On pages 10-11 it is related that in 2008, a very cool year, only four accessions (of 160+) flowered. The paper also states that earlier flowering is associated with shorter plants and heavier tubers. I obtained three of these accessions and grew them this year. We had an extremely cool and rainy summer, and even though they were planted quite late, buds formed on two of them. The Stampede I got from Scatterseed looked different from the other one and appeared to be starting to form buds also. These observations lead me to believe that in a normal summer, at least some of these will bloom.

posted 5 years ago
Victor, flowers or not, have you gotten tubers in FBX? I grew up in Eagle, where we grew sunflowers OK, so I'm curious.

Victor Johanson
Posts: 408
Location: Fairbanks, Alaska
28
posted 5 years ago
Well, the biggest plants were on a hugelbed; they got about 8 feet tall. When I went to dig them, I discovered that the voles had been feasting, so I couldn't really evaluate tuber production. Only two of those came back this year. I had others growing in the ground, but didn't want to disturb them until I knew they were established enough to survive the winter. We had a mild one with plenty of snow cover, and they all did fine. I still haven't dug any, but I'm planning on checking it out soon, before the ground freezes, so I'll let you know. The season here may be too short here for much production. I'm kind of stoked about one of the Canadian accessions; the tubers they sent were huge and the plants are very vigorous and they did form flower buds. We broke all the rainfall records this summer, but are having a nice extended fall, with record highs, so that's kind of making up for it.

Never been to Eagle, but judging by the photos I've seen it's an awesome place.

posted 5 years ago
I wonder if the really hard ground freezes might kill the tubers also, in one of the winters where it goes to 40 below before much snow falls to insulate. It sounds like you've got some promising cultivars for the short season. Down here in Oklahoma there area variety of burrowing creatures that eat plants, so I have no idea if any tubers will survive on my plants.

Victor Johanson
Posts: 408
Location: Fairbanks, Alaska
28
posted 5 years ago
I can see them freezing out, especially if they're not well established. I didn't do anything for them last year, but it wasn't super cold (by our standards, anyway), and the snow was good. I'm considering mulching them with leaves. Once I get a good population going, then I can experiment and see how much they'll take. I'm not disturbing them this year, and next year I'll start moving patches of them around I've got about 10 patches going now, and some have spread to cover about 15 square feet. They didn't get giant this year; the biggest are probably six feet, but most of them aren't in the richest soil and we had a wet and cool summer.