$5000 House on the High Plains Challenge

denise ra wrote:Eliot Mason You make some good points about the cordwood and mortar differing expansion rates, :(.  I'm not entirely sure how deep the soil is in my two possible building areas. There is some soil and it lies on Permian Red Beds which per Wikipedia are "Red beds are sedimentary rocks, which typically consist of sandstone, siltstone, and shale that are predominantly red in color due to the presence of ferric oxides." There  are also some layers of rock and quartz-like gypsum. I don't really have a hill to dig into, they are mostly gentle slopes in the building area. My concern with digging in is Mold!

Leila Hamaya - I looked at the Faswall and am going to follow up with them about pricing. Thanks. They do put it in basements, etc.

yeah it is neat. i've never seen the Faswall up close, but i know a west coast builder who uses it sometimes. there are several other products and brands that offer something similar, an alternative to concrete, with some smaller amount of cement in the mix.
you can also look into making your own blocks, and theres different things you could look into. i definitely like soil crete, earthy like cob, but a bit more set up. good for floors especially.
i...am going to try to look up something i saw before...it was like a movable block maker. another words, you had movable form, and made each of the blocks right in place. slip form stone is pretty cool too.

with doing anything underground the big issues is always moisture. the way to get through these issues is not only moisture barriers, but zooming way out to the whole site design.
you want the shape of the earth around the house to be all sloped downwards, and least the few feet surrounding the house....then all around going out .

also you can do as in the Umbrella house, insulating and water barriers the ground surrounding the house.  so for 10-20 feet surrounding the perimeter you place a huge umbrella under the top soil...then do your earth berm on top of this. direct whatever slopes towards a deep trench filled in with tons of gravel and sand...and way zoomed out in the design, direct any overflowing waters towards somewhere good, like your gardens =)

posted 2 years ago
Re: permian.  Hmm. That's not granite, but if there isn't a lot of overburden on top of the permian layer then i would complicate digging.  The Wofati design doesn't require digging so much as scraping and piling up, but since you don't have the abundance of trees that design needs it might not be a good option.  But do remember that you don't necessarily have to dig down to create an earth-sheltered house - you can also pile up!

In terms of going down and mold... this is a concern.  Its TOTALLY possible to do so.  It requires Building Science, a good design and attention to detail in construction to control moisture levels both in and around the house. The Oehler structures work largely because of attention to moving water well away from the structure - whereas a roof is generally the "hat" of the house, if you make it more like an umbrella then you can have a dry house.

On the other end of the price spectrum are PassivHaus buildings.  These are highly designed and engineered buildings that are so efficient that they really don't need a heat source - the extra heat from cooking, warm laundry, your shower can be enough to keep them nice.  A key part of what they do is tightly air seal the house - and they care a LOT about moisture.  They have very high-tech approaches which aren't appropriate for this challenge - but the point is that so long as you understand and deal with moisture you aren't limited in your building designs.  The cost of an "umbrella" for the house can be a bunch of free billboard tarps.

posted 2 years ago
Lime-mortared Stone Dome with recessed windows and welded steel roman blinds. Steel plate doors. Cellars underneath for food storage and workspace. I witnessed an EF1 tornado last night and it is still on my mind... You get worse out on the high plains. This thing would probably be fine even with an EF5. If you can get peace of mind for $5k, do it.

the Umbrella house has some great concepts in it, that can be applied to partially earth bermed house, or even deep basements. 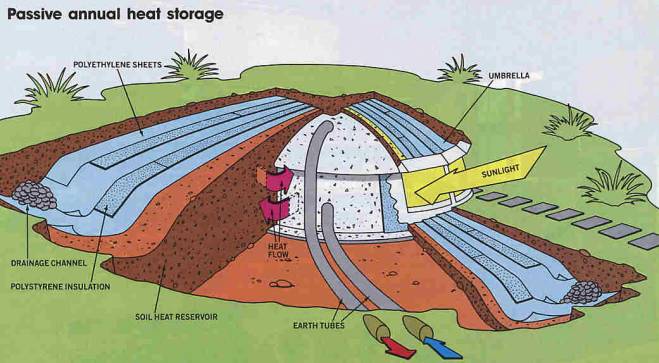 the main point being - insulate and lay down a moisture barrier for 10 feet surrounding the perimeter of the underground portions. by keeping the dirt around your house dry (and warm!) there's less moisture to even get close to your foundation.
the other main point being - zoom way out and sculpt the land around it to all be sloping downwards...so water always shed away from your house.

at the edge of the perimeter...about ten feet out from your house...at the end of the moisture barrier and insulation...dig a huge trench thats filled in with pourous stuff, gravel and sand.

and potentially also do an air intake and outflow....then cover this all up with a lot of topsoil and the ground underneath your immediate front lawn will all be dry and provide a thermal battery bank, keeping more warmth and dry earth surrounding your house.

btw i did manage to find the link i was speaking of...doing bricks in place with the use of movable forms ---> https://permies.com/t/49057/bricks-easy-adobe-home

posted 1 year ago
Update:
I've decided to go with an 8'x20' shipping container insulated on the outside and attached to piers. Hopefully, not my forever house but could be rented or AirBnB later. I'm super glad I did not decide to put an RV or camping trailer out there as for three days and nights this week it blew 25mph the whole time a cold front was coming in. I would have been seasick!

I think you've probably made a decision that will give you a lot of options.  It can be permanent or moved fairly easy if you want to sell it, should be very weather tight and easy to add an attached porch or stand alone porch with roof or without if you decide to multiply your living space to the outdoors.  I'm sure getting the decision made and moving forward will really enhance your experience of moving onto the land.

posted 1 year ago
Thanks for the update!  Keep us posted on how this goes.