What started you down the permaculture path?

John Paul Smajda
Posts: 14
posted 9 years ago
I first heard about Permaculture 3 years ago when I first started listening to Jack Spirko on The Survival Podcast. It just clicked and made sense. I knew this was what I wanted to do. I'm finally taking a PDC online with Geoff Lawton! Hopefully I will do some design work before I even buy my first piece of property.
Greta Fields
Posts: 218
3
posted 9 years ago
Like Shawn, I was interested first in homesteading. Back in the 80s I collected all books b y Helen and Scott Nearing. I think the Nearings' philosophy needs to be integrated into the current permaculture movement. I still consider their books the gold standard, for an example of homesteading. I heard the word permaculture on the Internet, and a communitarian gave me a copy of Holmgren's book. I don' particularly care for his books or the philosophy of most people, who today are trying to make money off their farms through cash crops, CSAs, intensively grown beef etc. I much prefer the Nearings' paradigm.
Travis Johnson
pollinator
Posts: 4958
1182
I like...

posted 5 years ago
For me it was a neighbor who told me about rocket stoves, and so having him interested in them, I was interested in what they were which lead me to here. Once here, and always a farmer, I had a lot to share, but even more to learn.

My family is engrossed in farming, about 6 full-time farms and yet I watched several fail over the years. Mine direct lineage is 9 generations long (1746) so I don't want to be the one at the helm when it fails so I don't want to ride that train off the rails. That means doing things different. I thrive at different! I got one foot in the conventional farming grade, and another foot in permiculture. I think it is a really good place to be; rooted in some past success, But also doing things in a new sustainable way.

It is a crazy life; My family thinks half the stuff I do is absolute craziness, yet if a permie was to come her they would probably flog me for not doing enough.

So far it is all working though. Most farms last 3 years and then falter, and I have been at the helm for 9 years now, and 1-1/2 years went to full-time farm status.

posted 5 years ago
I've wanted to be a farmer ever since my parental unit asked if I wanted to be one when they were trying to improve my grades. Not one to be threatened by a briar patch when one is a rabbit, I decided then and there in the 3rd grade that I'd be a farmer. Homeschool group trips to Amish country, pick your own orchards, the pumpkin farm, and a living historical farm where everything as done as if it was the 1840s only cemented my resolve. Along about 11th grade, I started school at Eastland Career ctr in Groveport OH, and was in the Horticulture course for 2 years. I remember being on my way to compete in the Cents show's plant and disease identification contest and I was reading the Old Farmer's Almanac and there was an article on the harm of GMO crops to farmers, and I decided then that I'd never grow them. I placed tied with 75 others for 3rd place. After the contest, we went to the trade show and ran into a seed company that turned out to be a subsidiary of Monsanto, debated them publicly, and left them with a bunch of angry farmers to deal with. I was 17 at the time. When I was 18, I moved in with my Grandma in NC, and there had a garden of modest size. I remember not having enough dirt to make a level raised bed (it was like in the square foot garden system), so I filled the bottom 4 inches with pine branches and bark, then soil on top. I later found out it was called hugelkultur, but at the time it was solely to take up space, not the sort of well-reasoned thing that Hugelkultur is. It was the only box that did good out of the 6 beds. It got me thinking. I'm not quite sure how I arrived at it, but I became rather obsessed with Terra Preta, the Black Earths of the Amazon. The more I researched, the more interesting it became. I began a series of experiments. Then About 6 years ago, I came back to Ohio. Around that time I found this forum, read One Straw Revolution, watched videos of Holzer and Lawton, and have been experimenting with it ever since.

posted 5 years ago
I was looking at gardening stuff on Pinterest and saw a post/drawing of a Hugel mound and it intrigued. me.  I had no idea what permaculture was and had never heard of it.  I started doing research on Youtube and ran into the following video.

After watching this I was hooked on the possibilities.

posted 5 years ago
I come from a different direction, I'm interested in systems and cybernetics. When I asked system thinkers about real life applications all I could get for an answer was corporate management. Maybe now it's different but at the time these people reminded me of Laputans. It was a big disappointment.

I'm also interested in growing food and caring for my land. Many searches led me to permies.com and from there I got exposed to permaculture ideas. I don't know much about permaculture but it seems like it's what I was looking for.
alex Keenan
Posts: 493
26
posted 5 years ago
I met my wife in Alaska and she was always telling stories of the great gardens her mom had as she was growing up in Ohio.
As fate would have it in 1997 my family found itself in Cincinnati Ohio.
So trying to create a great garden and edible landscape was just a given.
Danny Smythe
Posts: 3
Location: Zone 9b
posted 5 years ago
Been veg. Gardening/experimenting for decades. About 3200sf garden. Always trying new ways & observing nature. Hauled in & manhandled manure, tiller etc.too much work. Came across wheel hoes by chance. No more tiller/outside inputs. We use leaves/twigs/branches applied to garden beds to feed the worms which plow for us. Wheel hoes for weeding etc. Trying less & less work. Experimenting, learning mostly what not to do. Intrigued by the hugel-beds. Perhaps build 1 this winter. 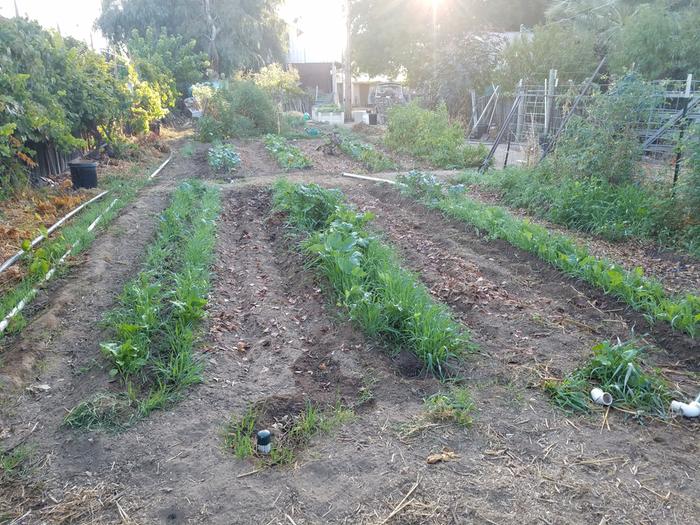 posted 5 years ago
I suppose it was around 1969 or 1970 when I started really using nature's methods for growing green things.
In college I was on the MD path and so ended up with degrees in chemistry and biology, ended up as an assistant in the microbiology end of the biology department for my last year of formal school.
Since that time I have always grown gardens using no chemicals or inorganic amendments.