Dale Hodgins
Posts: 9002
Location: Victoria British Columbia-Canada
676
posted 4 years ago
I decided to try using my long reach hedge cutter for mowing. It proved to be much better than the one attached to the wheelbarrow, for doing really tall stuff on difficult ground.

The Stihl model is variable speed, so I was able to give lots of power when needed and barely run it through light areas. It worked great on mowing down broom and berry bushes.

Below is a before and after shot of about 150 feet of the road. It took 12 minutes. Some areas were cut 5 feet from the traveled portion. I also used it overhead, to clear little branches that were reaching for the vehicles. I did about a quarter mile of road on both sides in 2 hours. Most of that time was spent on taller material. Grass and weeds under a foot long, probably took half an hour in total.
20160625_203333.jpg
20160625_205058.jpg
Hans Quistorff
gardener

posted 4 years ago
I have been doing the same thing as Dale plus trimming back my grapes to expose the fruit ; only I have been using a gasoline powered Stihl.
I am also well into my hay cutting. I use my scythe blade that I call a Wauna Blade that I sharpen with a round file so that each tooth is a scythe. When mowing I do not hold it as a trimmer but as one would hold a scythe. After decades of cutting with a scythe I can swing an eight foot arc with a 250 mm blade cutting 5 inches with each swing. Because the scythes are always moving at a constant speed my swing can be as fast or slow as appropriate for conditions. Three cups of gasoline with Amsoil 2-cycle oil mixed 100:1 one hour = 15,000 square feet mowed.
DSCN0381.JPG
DSCN0383.JPG
DSCN0382.JPG

Gordon Haverland
Posts: 489
Location: Dawson Creek, BC, Canada
43
posted 4 years ago
I have had my hay drying in a rack on the field.  I'm not crazy about how the rack worked, I might modify it.  It seems to hold quite a bit more hay, than I was lead to believe.  But, building something based on a single measurement, and pictures of young girls using the hay rack isn't quite as information dense as one would like.

I suspect my hay is drier than it needs to be.  Further drying (of a test sample) in a microwave produced very little mass loss.  So, I rolled my US Park Service pine straw (long leaf pine) baler over to the hay rack, and proceeded to make my first square bale of hay.  The hay rack was only half full, and to produce this first bale I only unloaded hay from one end extension.  As an ex soccer player who's been injured too many times, I am still quite muscular and heavier than I should be.  I would probably make a good forward in rugby, well over 120kg.  In any event, I compressed the hay well.  I noticed the door was bowing at the bottom, and to get the bale chamber open later I had to tap at the latch with a hammer (while pushing against the door).  I reinforced the door at the lower hinge location afterwards.  Supposedly a 12x16 bale, I will guess it is 30 inches long (I didn't measure it).

As I am not making many bales (I thought it was going to be 1, it may be 5), there was no sense buying a spool of baler twine.  I bought some 3/32 multi-coloured cord (275 pound breaking strength) to be distinctive.  I had read of people putting wood toggles on bale strings, but never seen how that worked.  But, after entirely too much work, I am the proud owner of 1 square bale of hay.

The bale is sitting under cover (in the pickup).  After an 20 minutes or so, I opened the tailgate and the bale smelled quite nice.  Mostly pale green, with some patches of sunbleached yellow.

Dale Hodgins
Posts: 9002
Location: Victoria British Columbia-Canada
676
posted 3 years ago
I have done quite a bit of mowing,  since first posting this. Almost all of it has been done freehand. I tend to do it along pathways and stairs at my customers homes. Most areas would not accommodate the wheelbarrow contraption. The guard teeth protect the machine from rock faces and concrete. I often advance slowly down garden pathways that are overgrown with weeds. Heavy growth like this tends to bog down the weed wacker. After going through with the hedge cutter, I often still use the weed wacker, to finish things off. My cordless Milwaukee angle grinder does an excellent job of sharpening all of my hedge cutting equipment. I was given a price of $60 to sharpen one unit. It took 10 minutes for me to do it myself.
Dale Hodgins
Posts: 9002
Location: Victoria British Columbia-Canada
676
posted 3 years ago
On Monday, I went to a friend's house who has foolishly introduced many invasives to her once well-kept garden. I used the Long Reach unit. I tried using it like a scythe. It was awkward and hard on the elbow. Then I tried holding the bar so that the teeth point on an angle towards the ground and walking backwards. This worked pretty well.

A brick patio had been allowed to grow up in weeds more than a foot tall. The cutter slides along the brick and shears everything at half an inch long. Not quite as good as pulling them all by the root, but much faster. 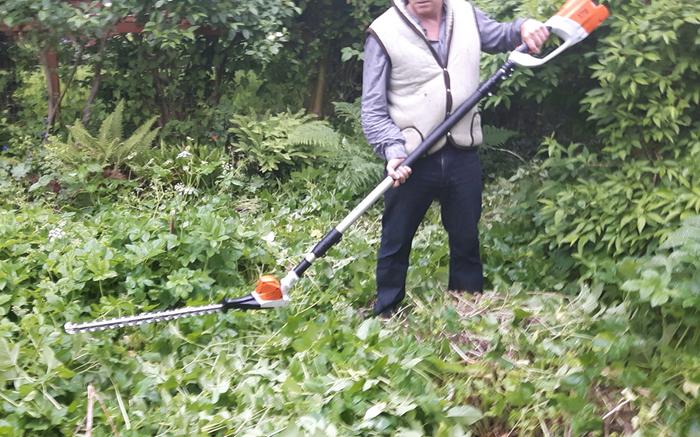 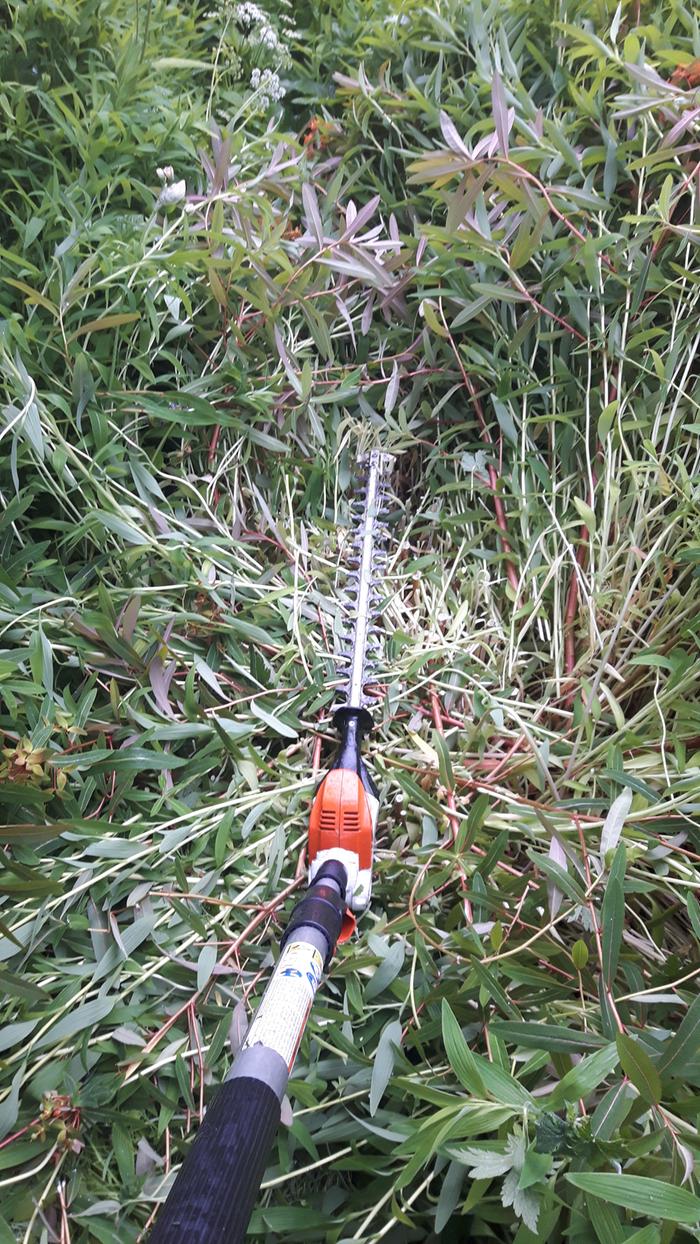 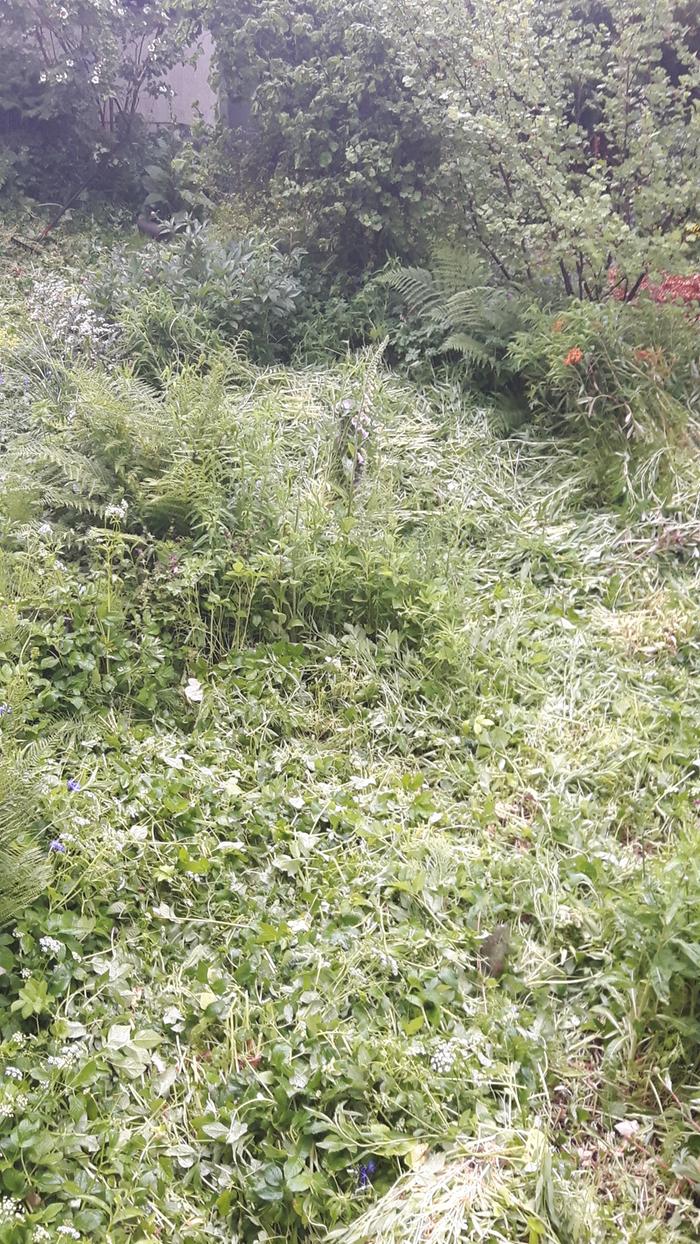 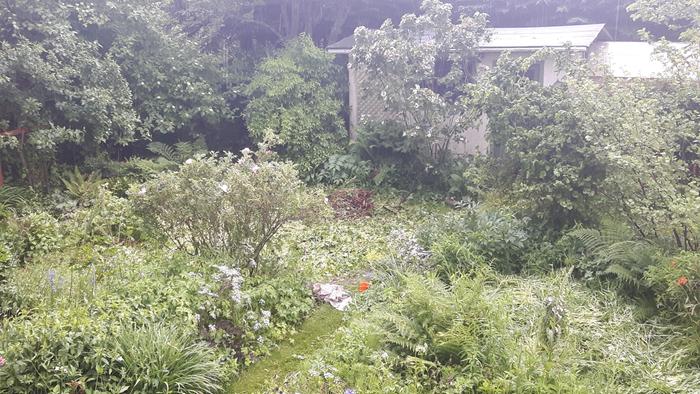