Make your own loom

posted 1 year ago
I have always found weaving mystifying. Watching this tutorial on the link you shared was a TOTAL revelation to me. Beautiful!! This is absolutely simple enough to try at home. Thank you so much for sharing!

Kevyn Schneider
Posts: 2
posted 1 year ago
Excellent video.  But, um, I promise it took more than two minutes.  A lot of time spent in the making of it was edited out of the video.  Little things you don't realize are a part of such a project, even as simple as preparing the site, all add up and are not shown.  For proof, go out into the woods, take modern but non-electric hand tools (but no parts such as twine to tie things together, precut sticks, etc.), and create just the loom so it is sturdy enough to stand up to the same reasonable pressures his did without malfunction (sticks moving or pulling out of ground, etc.).  Start a stopwatch as soon as you enter the woods and stop it once you are finished.  It should be MUCH easier for you than for him given you have tools like a hatchet, knife, saw, hammer, etc...
r ranson
steward & author

posted 1 year ago
It usually takes me between 10 and 20 min to make a loom - depending on if I have someone to do the power tools for me or if I'm cutting it by hand.

Longer if it's a more complex loom. 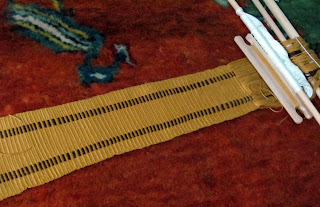 images borrowed from my blog

One thing I learned is that the yarn has to be very smooth and EXCEPTIONALLY strong.

So what would you suggest? I asked the people at the fabric shop and they couldn't help me. I'd like to make straps and harnesses to pull sleds and stuff like that. Textile crafts are hard to get into I don't understand any of it.
r ranson
steward & author

posted 7 months ago
Mercerized cotton yarn weaving is a good starting place.  That's what I would teach with for the first strap.  From there, we can adjust our technique to adapt to the yarn, but that first one seems to be quite the learning curve.

r ranson wrote:Mercerized cotton yarn weaving is a good starting place.  That's what I would teach with for the first strap.  From there, we can adjust our technique to adapt to the yarn, but that first one seems to be quite the learning curve.

Ok, mercerized cotton. And what about the size I'd need for good sturdy straps? And how much of it?

I found this place, LoomLust. They're located in New Brunswick that's nice but there is so much choice my head spins.


If I understand correctly 20/2 yarn would be smaller than 8/2? If true it makes me wonder if the AWG system for wires could have been derived from textile conventions.

posted 7 months ago
I would start sampling in 2/5 (5/2 in the USA) cotton.  That's will make a fabric a lot like a belt strap.    I like the stuff Ashford makes.

posted 7 months ago
Thank you r ranson, next time I post hopefully it will be to show off my work.
r ranson
steward & author

posted 7 months ago
Here's the yarn I like https://www.harmonique.ca/catalog/ashford-weaving-mercerised-cotton-yarn
Any Ashford dealer can special order it if they don't carry it (a list of dealers on the website)

posted 7 months ago
I got my yarn this week, I'm off today and it' raining outside so I decided to give it a try. I tried knitting and crocheting and can't do it but this isn't too bad once the loom is set up :)

posted 5 months ago
Nobody else tried this? It's not that difficult and it's fun and useful.

I made my second strap and it looks much better. Weaving is also less of a struggle, at one point it almost became relaxing!

For the new strap I started with the same cotton yarn to make my string heddle and that was no fun. The friction caused the cotton to fray eventually binding everything together. I untangled the mess and remade the heddle from dacron kite string. It's a bit bigger than the yard, slippery and doesn't get hairy.

Another observation is that, in my case, a backstrap loom for narrow bands was not an ideal first project. I can't keep that bar level no matter what I do. Cutting shallow grooves in the loom bar helped keep the warp in place but I won't be using the loom again for narrow work. I'm building myself an inkle loom for this purpose. It's a work in progress.

strap.jpg
inkle.jpg
Janette Raven
Posts: 67
Location: North Island, New Zealand.
26
posted 5 months ago
I lived in a leprosy community in Nepal. The women there used back strap looms to weave coarse open weave blanket strips. Once enough strips were woven they were stitched together, and felted down into the most beautiful, thick and warm blankets I have ever seen. The children in the school slept in these blankets, on concrete floors throughout winter. One blanket beneath their little bodies, on the concrete, and one blanket on top, with a friend on either side to help everyone stay warm and snug.
Life can be simple and yet noble.
Children staying warm.
Simple technologies. Solutions to human and world issues.
Hugshugs from early winter New Zealand, where I went foraging on the beach today and built a new garden for the kumara slips to go into, ready for next spring.

He uses this tubular rigid heddle with a number of styles of loom, including inkle and warp weighted.  He also does some very fancy pattern weaving with it.  Exploring some of the videos on his YT channel will show what he can do with it, but this one shows the big benefit - quick setup (narrated in Italian, but I think I caught most of it, even though my Italian is pretty poor):
https://www.youtube.com/watch?v=hLTaOnVlE4c

Another interesting option which is possible with Matteo's heddle is swapping the warp threads around, which would allow for some pattern effects which would be difficult to do with most other loom styles.  He also demonstrates weaving using a library book as the structure of his loom, weaving on a bench in the park/square, and much more.  Matteo is a very clever guy, from a long family line of weavers and loom builders, and from a region (the Italian Piedmont) which has been known historically for its weaving.  No doubt he would say that he's standing on the shoulders of giants, but I still think he's a very clever fellow.

I have attempted to make a tubular rigid heddle like Matteo's from a length of cast-off PVC drain pipe (I almost never throw anything away, much to my wife's chagrin!).  I cut the slits using a Pony brand hand miter box, but the edges were too raggedy and would have surely abraded the warp after a bit of use.  The Pony miter box was fine for mitering trim and casing when I redid our kitchen a couple of years ago (using second hand cabinets with quarter sawn white oak face frames and drawers - cheaper than the most economical compressed sawdust cabinets from Menard's!), so I know the blade is fine enough - the plastic is just stringy.  I want to try Carlon (plastic electrical conduit), since that seems to be what Matteo says he makes his from in one of the videos (not that brand, specifically, just plastic electrical conduit).  Maybe the plastic conduit will make for a cleaner cut; I know there are variations in PVC formulations.  I also found a very small wire wheel, which I think I can attach to the flexible shaft of my Dremel and possibly fish it inside of the plastic pipe to knock the burrs off from the interior.  Worst case, I may use a piece of EMT (metal conduit) or other thin walled metallic tubing, but the plastic seems nicer.  Bamboo might also be a workable material, but it doesn't grow in the woods here, and I've only been able to find small diameter stuff (garden stakes, etc. - though I keep waiting for someone's Tiki torch to end up in the junk!).

Also, for someone looking for a challenge on a rigid heddle loom, David Xenakis's book may be of interest:
https://stitches.events/wp-content/uploads/2021/10/XenakisTechnique.pdf
He discusses replicating four-harness weaves on a small rigid heddle loom, similar to an Ashford or other common commercial brand.  Also weaving double width fabrics, which could be handy if you have a 24" loom and want to weave 48" cloth (or whatever).

I should note that I have limited experience with weaving, though I have tinkered with several sorts - frame (mostly the ubiquitous pots holders!), card, and inkle, mainly.  So take any of my opinions and assertions with a grain of salt.

posted 4 months ago
With regard to creating narrow wares on backstrap looms - you don't actually need to wind the warp over a front bar. You can simply tie all the warp threads in an overhand knot, leaving a loop at the start, and attach the loop to your belt. This is one of the traditional ways straps were woven in Nordic countries.

If you would like to try creating patterns in your straps, there's a lovely book called 'Norwegian Pick-up Bandweaving' by Heather Torgenrud. The first part traces the history of woven bands in Norway from about the 16th century to the present day. There's pictures of several different loom styles that were all used to create the bands, including backstrap and vertical looms. The second part contains instructions and patterns for pickup bands in the Norwegian style.
Francis Mallet
pollinator
Posts: 161
Location: acadian peninsula, New Brunswick, Canada
128
3
I like...

Phoenix Blackdove wrote:With regard to creating narrow wares on backstrap looms - you don't actually need to wind the warp over a front bar. You can simply tie all the warp threads in an overhand knot, leaving a loop at the start, and attach the loop to your belt.

Thank you for the advice and the book recommendation.

I'm having fun with my inkle loom and I can see my work getting better.
inkle2.jpg
Francis Mallet
pollinator
Posts: 161
Location: acadian peninsula, New Brunswick, Canada
128
3
I like...

posted 1 month ago
Yesterday I discovered peg looms, not much more difficult to make than a backstrap loom and probably easier to use. I really want to try this!

Usually I'm like a bee that hops from one flower to the next but I'm still having fun on my little inkle loom.