posted 4 years ago
Ok, so deciding where the first face will be:

I get my log dogged down and then find a level line on both sides that is as long as one face of the beam then square down for the first cut face, and square from there.

I drew this log with the squares Kaye's out on both ends and the snapped line with hashes down it.....the log is see through on the far end of the sketch.
image.jpeg 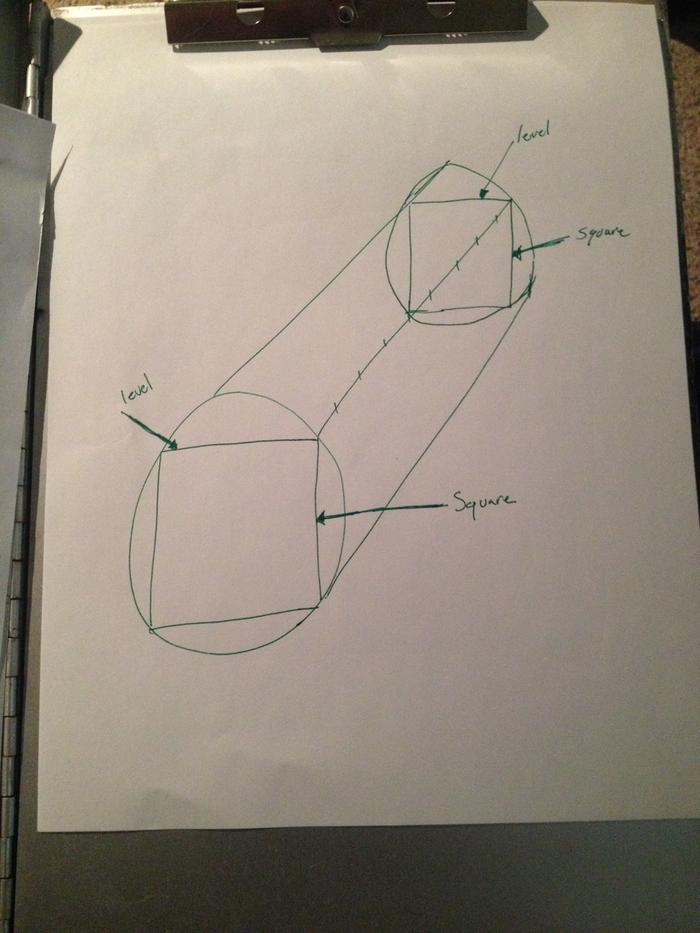 posted 4 years ago
The big waste cuts are like the underhand chop then you knock the blocks off between them, this us what you are doing with the chainsaw...do one of these about a 1/2 inch from your line every 16-18 inches down the length, then you can chop the blocks out all the way down, save the blocks for firewood! This guy is competing to chop through but we do this to get to the line fast
image.jpg 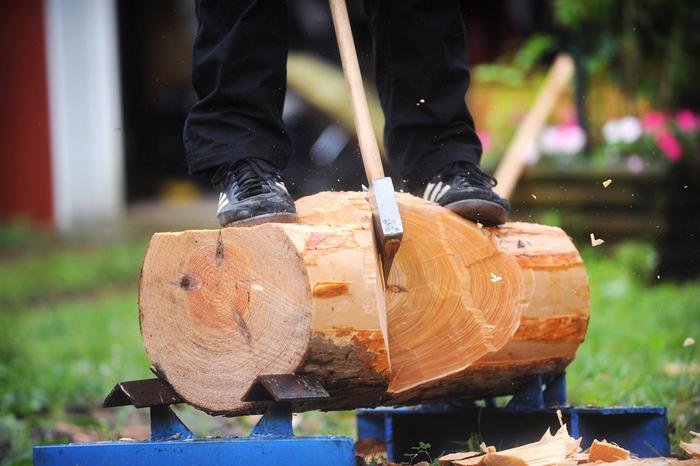 Roman Campbell
Posts: 52
Location: Blanchard, LA...zone 8b
posted 4 years ago
Making headway on my cabin style shop. Things are going a lot slower than I hoped but getting there, not sure I'll make my August deadline on finishing. Got a feeling those poles are gonna cause some heartburn as I go up.
IMG_20160322_155602.jpg 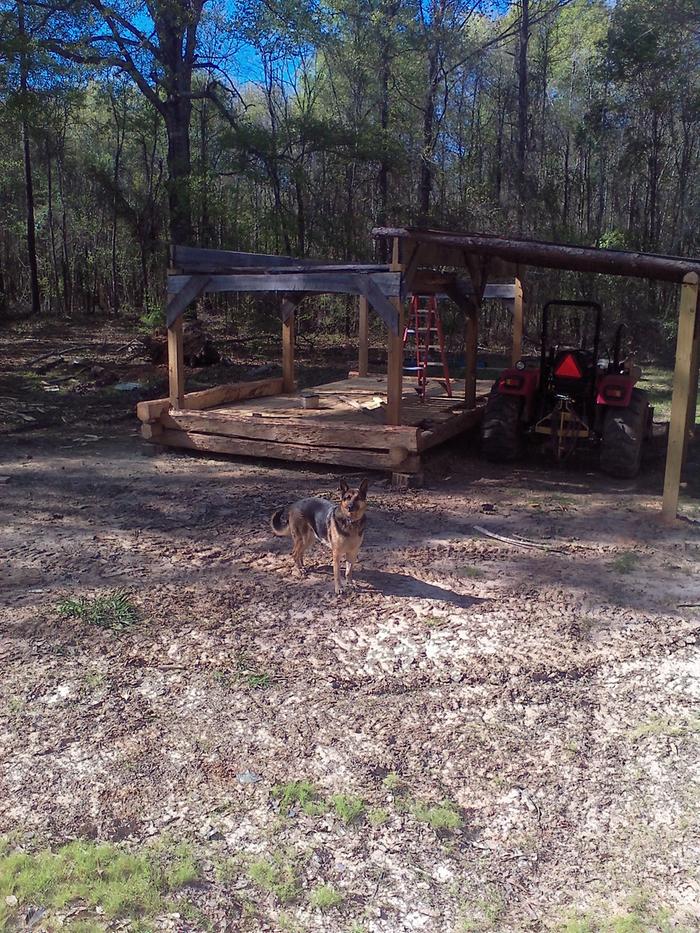 Roman Campbell
Posts: 52
Location: Blanchard, LA...zone 8b
posted 4 years ago
I had a question about types of wood for log cabin building. I have tons of sweet gum trees, all of em are pretty dang straight. Anyone have experience with hewing them? I'm reluctant to use them cause I have it engraved in my head that sweet gum trees are trash trees.
Tam Deal
Posts: 64
4
posted 4 years ago
There are at least 4 grinds for broadaxes used for hewing. The double bevel; the chisel grind; reverse chisel grind; and a grind like a slick which is a chisel grind with some curvature to the reverse side. So before you worry too much about your broadaxe, unless it was obviously altered, there is probably a way to use it.
Ed Mayhew
Posts: 3
posted 4 years ago


This fellow demonstrates a way to hew with a regular felling axe.  The way he marks the line with the chalk line is classic and applies for pretty much ny use of the tool.  The cuts he makes vertically leave what are called juggles, they are cut in to maybe 3/4 inch from the marked line.
When he starts cutting off the juggles with the felling axe is where he breaks from hewing as I know and practice it - but he demonstrates that it can be done and it can work.

This fellow is doing it a bit more the way I learned, with standing on the log to cut the juggles and working the tool vertically, not horizontally, throughout the process.  He also uses the felling axe to knock off the juggles, then switches to a lighter hewing axe to bring it to the line and get the cleanest possible face.
A heavier hewing axe, mine weighs in around eleven pounds, is good for blowing off the juggles in short order, and can then be used to do the finish work as well.  I choke up quite a bit for doing the closer, finishing cuts.

There's an immense amount of information to be learned from YouTube, from how to hew logs, to how to put them together into buildings.  Well worth spending some time browsing.

Oh, the heavy axe - it takes some time to get used to working with it, but you don't swing it like a felling axe, and you let the weight work for you.  It is work, and it takes strength, but you might notice that the guys in the second video are not youngsters.  Neither am I.  Never worked with a hewing axe until I was in my mid-fifties, and I ride a desk for a living

Roman Campbell
Posts: 52
Location: Blanchard, LA...zone 8b
posted 4 years ago
Well I got a lot done since I last posted. I broke down and bought a gransfors Bruks broad axe,  worth every penny.  I have run into sort of a bad situation.  I set my logs down on big oak stumps,  but as Ive been working,  I think it might have been a bad idea.  Problem is I can't take my logs down and redo it.  Would it be possible to shove some stones under the logs to provide a better foundation? They all are nailed into 6x6 treated pine posts so maybe that will suffice? 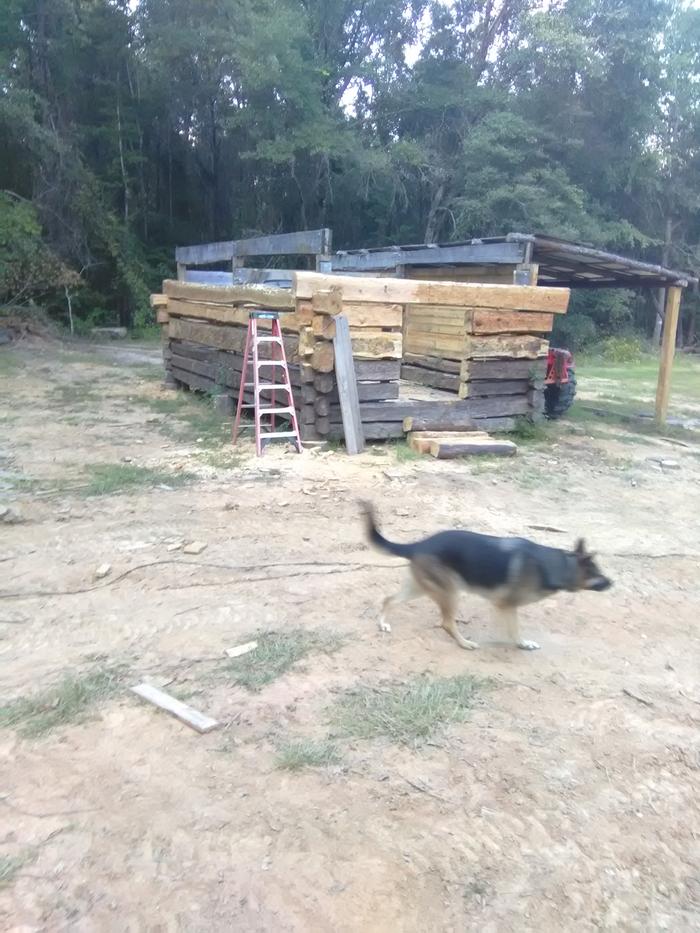