All about Pollarding your trees

posted 6 years ago
Here is a little info regarding pollarding trees. While I understand that there are a few different understandings of what pollarding encompasses but this is basically the International Society of Arboriculture's accepted practices for properly pollarding a tree.

First off the difference between pollarding and coppicing:

Coppicing is practice of cutting a tree or shrub to very near the ground in an effort to cause the plant to generate many new shoots mainly from dormant buds in the roots and along the root flare of the stump. One of the main advantages of coppicing vs. pollarding is that decay of the main stems that are cut is not an issue because they aren't actually supporting the new flush of growth, the existing root system is supporting that new growth directly.

Pollarding is the the practice of repeatedly cutting a tree or shrub back to the same point(s) according to a regular schedule with the goal of maintaining the main stem(s) below the cuts in good health and encouraging the stimulation of adventitious buds very near the cut area. One of the main distinctions between pollarding and coppicing is that fact that pollarding implies regular scheduled maintenance over the life of the plant whereas you can coppice a plant only once. The other difference is the desired goal of maintaining the stems below your cut in good health. This makes pollarding for true long term success much more demanding than coppicing.

To be done properly you must decide to begin the process when the point you wish to cut back to is still relatively young. From Francesco Ferrini's study on pollarding:


A tree responds to pollarding by building a
dense mass of woody fibres around the cutting
points. This bulky mass resists decay and
effectively divides the vigorous juvenile growth
from the aging stem (Harris et al., 1999). Hence, the
defensive and structural integrity of the tree is
maximized using this pruning system because
pruning cuts are made when biological reactivity of
the trees is quite high and living cells quickly react
to wounds and environmental changes and can
develop a strong defensive reaction (Coder, 1996).
Also, pollarded trees develop a constantly
rejuvenated, energy-creating young canopy, on top
of an increasingly ancient trunk. This slows the
tree’s normal aging processes.

The older the tree is the more you will be limited as far as where you can cut the tree back to and expect it to recover properly. A healthy young tree can handle being cut back to a single trunk where a mature one will surely succumb to decay if you try the same thing.

Once you pollard a tree it is vital that you cut all the shoots back to the pollard "head" (sometimes called the pollard fist) at least every few years, preferably every year or two. This prevents the shoots from maturing to the point that there is a chance of decay setting in before the tree can compartmentalize the wound. It is also vital that you do not cut into the pollard head; focus on making proper pruning cuts but it is better to leave a little bit of a stub if you have to to avoid damaging the pollard head.

As far as timing of the actual cutting, it is best to do the cutting when the tree is in its dormancy. 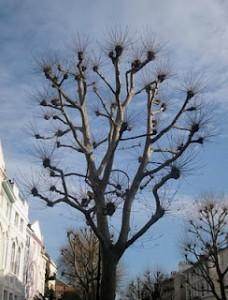 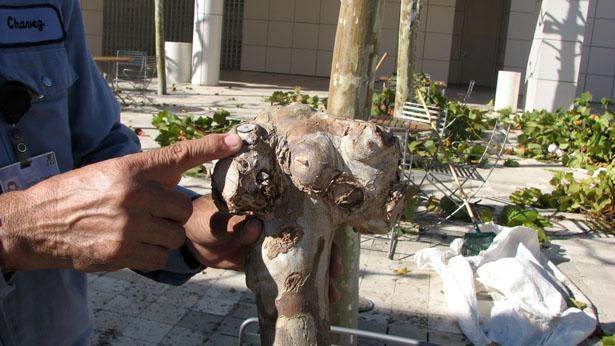 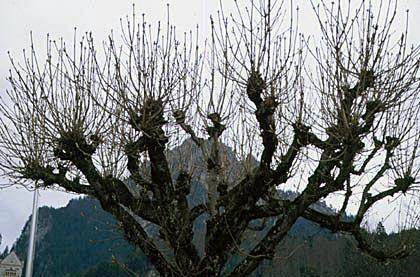 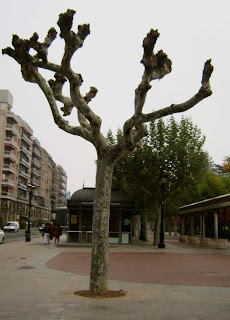 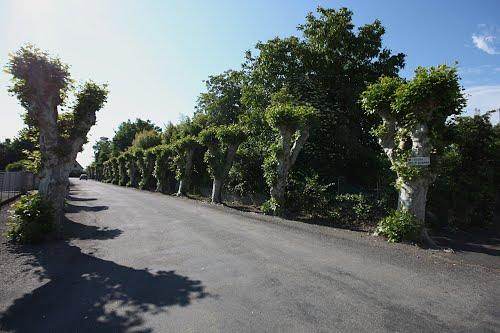 
The biggest mistakes I tend to see when it comes to pollarding trees would be cutting to point on too mature of a stem, cutting at the wrong time of year (a big risk of sunscald killing large portions of branches/stems when removing all the canopy) and cutting into or behind the pollard heads during pruning.

posted 6 years ago
Willows are probably the most common tree here, and they are all pollarded. I've kept a few "natural" but local older guys are disturbed when they see them, and ask why we're not "taking care of the trees."

The pollarding here is a little different from the European style described above, in that it doesn't try to reach the same spot each time; but the trees seem to like it, and many seem to be 100 years old. This style is common throughout the dry regions of the Himalayas. It provides huge amounts of straight sticks for planting new trees, roofing and other purposes, and firewood. It keeps the shoots safely above the reach of animals, once the tree has reached a good size.

You whack off a willow tree in late winter, during late dormancy, ie March or April. If you do it after bud break, the sticks won't take root if planted to make new trees. After cutting, you usually stand the sticks in water for at least a few days: either to moisten them for planting, or to loosen the bark for peeling. In my experience, if we plant the sticks the same day we get almost 100% success, but everyone here believes it's better to soak them before planting. Certainly for peeling sticks, it helps a lot. It gives you sticks with a very nice smooth organic light colored texture.

It might take a few years till the tree is established enough to pollard, The first time, you might wait 4 years till the second cutting. But then once the tree is vigorous, and if it has good water, once they are big, you can harvest good strong sticks every second year by pollarding.
1-Typical-willow-pollard-in-March-in-Leh-town.JPG 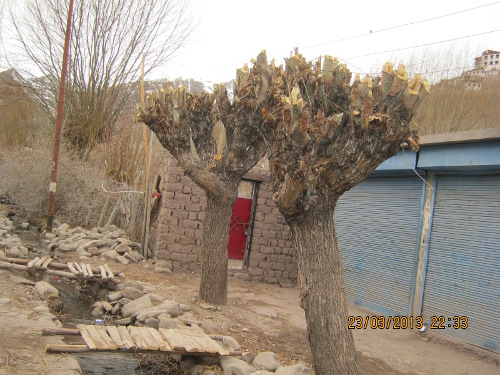 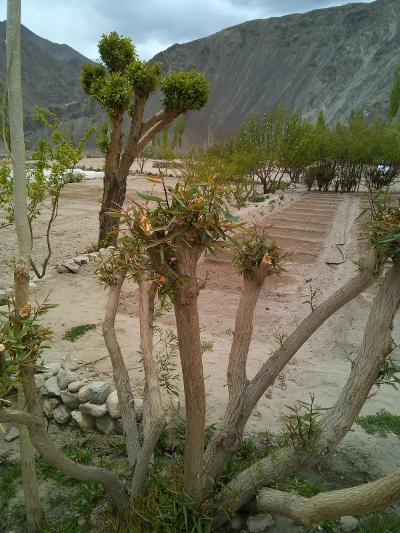 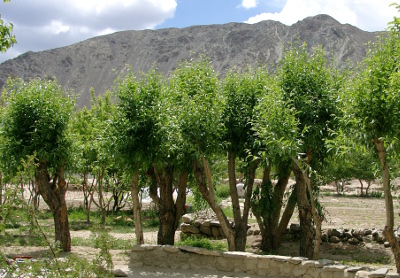 It's really fun to cut trees with hand tools, and willows are pretty soft. I use a pruning saw; traditionally here, boys use axes.

Everybody thinks they can invent something new and leave one strong shoot to make a second trunk. But actually if you do that it doesn't work well. Cutting everything off at once causes a vigorous flush of regrowth, that ends up being straight and strong. Any way you mess with that, the resulting sticks won't be as straight.

There are about 5 varieties of willow traditionally grown here, none weeping. Each has its own pros and cons: malchang gets your new land green the fastest, is very vigorous, and there are plenty of old specimens that look 100 years old; but the sticks are wavy, so it's less valuable in the long term. Sholchang makes very straight sticks, but is slower to grow. Droklchang grows higher and colder than the others, but down here at relatively low 10,500 feet high, is susceptible to canker and drought. Selchang makes bright yellow twigs and is considered useless because the sticks aren't straight, but I think it's a nice ornamental. We've got one with much smaller leaves that never gets very tall, so maybe it's a shrub willow; we have it just as an ornamental.

I've seen russian olives occasionally pollarded the same way; I have no idea of its characteristics as wood, but you can plant the sticks just like willows. 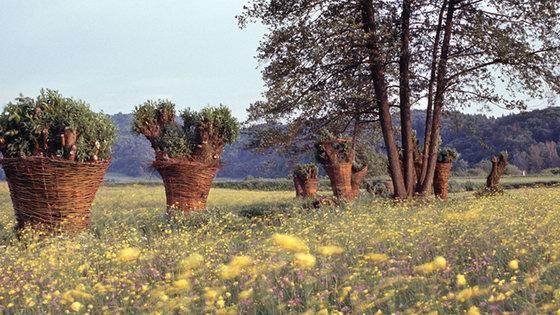 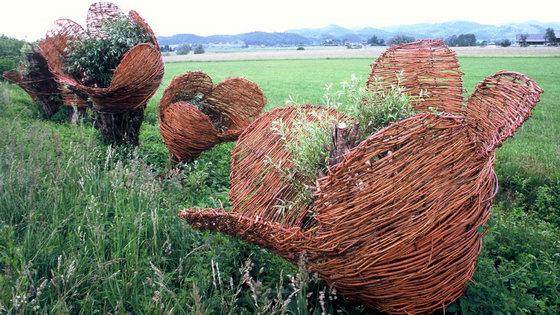 I'm also interested to hear if anyone has experience pollarding Robinia..

We have a small (10 acre) apple farm in the Olympics and I would like to begin growing our own firewood (as well as posts). But as far as firewood, I'd like to pollard something with some decent BTUs for a masonry mass heater we are planning..

Other than black locust any other suggestions for this? Even something with less BTUs but that might grow a lot faster and pollard nicely?

posted 6 years ago
As an alternative to Robinia sp. I'd recommend looking at chestnut trees. They're another high btu woood that can be coppiced and you don't have thorns to handle on your firewood, just on the ground if you let any get to nut producing maturity (which I highly recommend).

The vigorous regrowth from coppicing extends to the thorns of the black locust as well - as an arborist by trade I can tell you with much personal experience that those thorny whips are no fun to handle at all!

Sam Del Vecchio
Posts: 5
Location: Earthaven Ecovillage, NC
posted 1 year ago
I'm super interested in pollarding black locust because my guinea pigs love to eat the leaves and especially the bark. So far, I'm not having any success making a head/fist- the locust just doesn't seem to respond that way. Any experience/ideas?
Joylynn Hardesty
master pollinator
Posts: 3609
Location: Officially Zone 7b, according to personal obsevations I live in 7a, SW Tennessee
1394
3
I like...

posted 1 year ago
Check out this thread, about pollarding black locusts.

posted 1 year ago
What would be a good age to start pollarding trees? And should it best be done late fall before the frost sets in or late winter before the buds break out?
I have a row of pollarded willows that need to be cut this year. I also planted new willows from cuttings last year (I was curious to see if I could just plant one large branch instead of starting with a small one) The branch appears to have rooted. Would I be able to start pollarding it next year, or would that still be too early.

I also had to cut of a few robinias during summer, not the ideal time at all, but they were in the way. I’ve cut them back to about 1,70 m high. Here’s hoping they will survive this rather harsh pollarding!