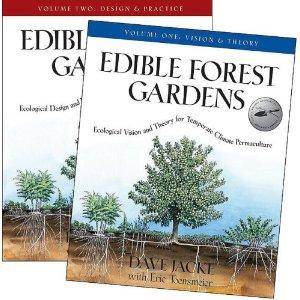 A thought provoking quote from Ch.2: "It turns out that the successional stage with the highest NPP is not the forest. The most productive stage is the intermediate succession, before the tree canopy closes in..... If you want to design your forest garden for highest yield, technically speaking, you will design and manage to maintain a preforest stage of succession." p.33-34

I have been staring at the land in front of my house (currently occupied by an annual food garden) and wondering just how much space I want to use for a forest garden, and how much I want to reserve for the annual plants. After all, I enjoy waking through my space, tying up trellises and parting leaves to look for hiding squash. Here in the PNW sunlight is one of the most limiting factors on the garden so I have to be careful about shade. I think I am going to peek ahead to the species index in the back so that I can wrap my head around this a little better. Anyway, I am glad the authors addressed this a little bit in the limitations of forest gardens. Finding the harmony there will be interesting.

I am also intrigued with the idea of forest gardening in the forest that already exists (p35). I come from a rather tree-less part of Texas, so it has taken me 17 years of living here to finally be OK with creating canopy openings

Perhaps something simple as transplanting native useful plants into the edges of the forest spaces would be an easy way to start. Sounds simple, but it has never occurred to me before!
Brian Cady
Posts: 106
Location: Colrain, MA, USA
6
posted 5 years ago

Zenais Buck wrote:...Perhaps something simple as transplanting native useful plants into the edges of the forest spaces ...

Huzzah!
Doug Barth
Posts: 35
2
posted 5 years ago
I made a note of the same quote. The preforest stage sounds very productive with lots of growth and yield before the plants slow down after the competitive stage is over. The yield is discussed a lot. If the forest garden plot harvests half the amount of an agriculture land, it still is on par with the calorie amount. The polyculture blend gifts a varied kind of wood product, fruit, nut, or veggie which, as I just said, won't give as large a yield but the work load is different. Beneficial plants distract/push away/confuse insects and the perennial system is intrinsically less work load for the gardener (in soil work, weeding). And the polyculture is a just in case this group of plants don't work, I have all these other plants yielding a bunch.

The section forest garden in the woods is a short version of the book Farming the Woods. I read that book after reading this one. I totally forgot that section was in this book. It has a nice discussion of what to plant in small clearings of already mature woods. It is especially important to me since a neighbor is clearing all the dead Ash trees from my forest in the spring. I just haven't had a plan what to do with that. Well now I do. Its leeks, ramps, ginseng, etc for the forests. And in larger clearings I can add paw paw and/or persimmon for the overstory.

The beginning section talks about mimicry and the hopes of us forest gardeners our work is sufficient to be like the forest. One, the important thing is our plants are similar to fit in the forest model. Just how similar the jury is still out. More experiments and forests will need to be made before we label anything not for use in the garden. Second, the plan has to include the succession for the site to be similar to a forest model. How that really plays out is discussed more thoroughly later in the book and the most important/interesting tidbits I got reading. Great stuff!

The chapter taught me a good lesson about my PDC project. I didn't describe the difference between Relay Succession and Instant Succession. He probably thought in his mind he was going to buy all the plants all at once then plant them all at once.
Zenais Buck
Posts: 113
Location: PNW
4
posted 5 years ago

The section forest garden in the woods is a short version of the book Farming the Woods. I read that book after reading this one. I totally forgot that section was in this book. It has a nice discussion of what to plant in small clearings of already mature woods. It is especially important to me since a neighbor is clearing all the dead Ash trees from my forest in the spring. I just haven't had a plan what to do with that. Well now I do. Its leeks, ramps, ginseng, etc for the forests. And in larger clearings I can add paw paw and/or persimmon for the overstory.

Thanks for referencing this , I look forward to checking it out!
Ann Torrence
steward

posted 5 years ago
The first sentence sets a pretty high bar (p 25) "The ultimate goals of forest gardening are the growing of an abundant diversity of tasty, nutritious, and healthy foods and the cultivation and perfection of ecological ways of seeing, thinking, being, and acting in the world." Isn't that a great way to restate the 3 ethics?

I too was struck by the idea the highest yields are in intermediate succession stage (p 33). It seems another way to say that the edge effect is where the most diversity and productivity occur.

The piece that really needs pondering is the distinction among self-maintenance ("grunt work of running an ecosystem: getting nutrients were they're needed when they're needed, supplying water, harvesting crops, planting plants, and so on." ) vs self-regulation (keeping populations in balance) vs self-management (Management involves envisioning the future and marshaling the forces required to get there. In the forest-gardening context, that means guiding the succession and evolution of the garden, and perhaps breeding new plant varieties to enhance system performance and productivity.) It lowers the threshold for success to something achievable, tamping down the perfectionism that dooms a lot of new permaculture projects to failure. "In the meantime, we'll stick with reasonable, achievable goals." (p 47-48 ), noting that even complete self-maintences is likely to remain a holy grail in forest gardening for the most part." We should talk more in permies.com about staging in these phases rather than trying to do it all at once.

The example segment of Charlie's garden illustrates this, it took "four or five years to start getting significant amounts of food from the perennials." (p 61)

I also found the site-specific recommendations for Charlie's garden very interesting. I can use the idea of listing all the pollinator bloom times and filling in the gaps, and planting more understory to provide calcium needs for fruit trees with specific plants (64). These are good examples of detailed design revision, that the establishment process is ongoing as we gain more knowledge and our needs change as well.

Chris Kenney
Posts: 9
Location: Santa Ana, CA USA
posted 5 years ago
Mimcry-- In a similar vein to this book, there was a tip in "The Permaculture Orchard: Beyond Organic" DVD along the lines of nature abhorring a vacuum, so when Stefan weeds, he refills the spot with some more desirable variety of ground cover. Any suggestions on what species could mimic Asparagus Fern and Bermuda grass niches? Speaking of Bermuda, the section describing Martin Crawford's polyethylene+mulch+ground cover strategy was pretty inspirational for me. I wonder if it would work with more "opportunistic" grasses. Since I'm on a smaller urban lot, perhaps the polyethylene mat could serve double duty as a temporary outdoor living room in the interim if it could handle a little foot traffic.

I can relate to Doug's comment about the pitfalls of PDC designs and Instant versus Relay succession strategies! It always seemed a little odd that the PDM started off by telling you how important it was to take a year to observe the land, to make incremental changes and see where complexity starts to stack up. Yet it is so tempting to finish the course by submitting this "extreme makeover" permaculture design to apply All The Things. It was helpful to see an example of a staged design and also helpful to see some more gradual-adaptive approaches like "nuclei that merge" that might better accommodate my learning curve. I feel this most acutely on the topic of earthworks. EFG1 subtly points out that if you do a lot of land contouring, you might end up in a relay planting situation where you'll have to do your time with sun-loving early succession species before having much success moving in more of the forest layer... unless other people read pg 42 differently? Has anyone tried doing Instant succession on right after swaling? How'd it turn out?

To build Zenais' thread about the preforest stage of succession, I found myself wondering a lot about what Dave and Eric would have to say about Tom Spellman's Backyard Orchard Culture approach. In several places now, they have critiqued a forest garden for being too densely planted to allow the trees to reach full productive capacity (Hart's pg 0, Charlie's on pg 64). I can't do Tom's whole philosophy justice in one post, but for small scale operations, he advocates taking several varieties of an edible tree and planting them close together, possibly even "in one hole." This checks their growth, which, if still too vigorous, he suggests balancing with extreme pruning sessions at several points during the year. It seems like this could put you in somewhat of a persistent preforest stage without a fully loaded canopy. You're left with less yield per tree, but with an extended fruiting season, all within reach without needing to get out the ladder or fruit picker basket or chasing away squirrels and birds that came a little early to collect the surplus. Super dense but also supporting diversity and sustained harvest. Yes? No? Has anyone tried this approach? How did it go?

Like Ann, I found the site-specific suggestions for Charlie's garden very interesting. Not only had I been neglecting insectary strategy entirely with my "if I can't eat it, I won't water it [or even bother to introduce it]" philosophy, I also hadn't put much thought into dynamic accumulators beyond the permie go-to of comfrey (which I have yet to start successfully from seed).

Eric Toensmeier
Author
Posts: 145
57
posted 5 years ago
Hi all, re: multiple trees in same hole. I have a few planted this way, I just treat the "multi-trees" as trees that still need sufficient spacing for light and air flow. Eric