Posts: 15
posted 10 years ago
I need helpful opinions, but I think I just need to tell the whole story.

I live in a northern suburb of Dallas, and went to look at a house in Dallas, which of all things listed as including a basement.  My very experienced realtor, who was a home inspector for 10 years before that, said this was incredibly unusual.  The only other residential Dallas basement he had seen was concrete.

This house was/is a pier and beam home built in 1950 without a basement.  It is on a hill, and at some point the home had been dug out underneath to create a basement basically under the whole house.  It is currently owned as an investment property, with the investors knowing nothing about the how, why, or stability of such structure.

Whatever flooring in the bottom of the basement was there, was removed by the investors, and it is currently a dirt floored basement.  They also removed the basement wall paneling to inspect the wall.  The dirt and earth is being walled out by corrugated steel.  My realtor doesn't think that would be good enough to securely hold up over time.

There are two good reasons that basements and underground housing basically don't exist in Dallas.  We have very expansive clays that easily destroy many well built foundations, sometimes in only a few years.  2nd, we have a very high water table.  I realize that building on a hill can partly minimize this, and this house is on a hill too.  If I could feel secure about the basement, I think I'd love the house.

Feel free to look up the house if you'd like, but the pictures on realtor websites aren't including pictures of the basement.  MLS#: 11420875  It was only recently listed, I think.
Jami McBride
gardener

posted 10 years ago
Hum... using Mike's http://www.undergroundhousing.com/ methods -  you maybe able to hire someone to help you to put thick plastic against the clay walls, then reinforcement wood planks and last of all vertical polls if needed for additional strength.

Posts: 15
posted 10 years ago
Here's a question though.  When I went to see it, it had been a few weeks since it rained much, I think.  However, the underground part was still pretty humid, unlike the 95 degree temperature out doors.  It didn't smell moldy.  Maybe a little mildewish.  Is that normal or appropriate for underground shelters?
Posts: 278
Location: Iowa, border of regions 5 and 6
posted 10 years ago

carltonh wrote:
Here's a question though.  When I went to see it, it had been a few weeks since it rained much, I think.  However, the underground part was still pretty humid, unlike the 95 degree temperature out doors.  It didn't smell moldy.  Maybe a little mildewish.  Is that normal or appropriate for underground shelters?

For something built in the 50's it's normal.  It's also not desirable.  I'd wager it's because there's no vapor or moisture barriers in either the floor or the walls.  My guess is that since the basement was dug out after the house was built, there are no ventilation ducts to or from the basement.  It's quite possible that this was dug out primarily to be a fallout shelter, with the person doing the digging probably not knowing what he was doing.  What, by the way, is holding up the walls on the first floor?  Was the original house built on a slab, and the person just dug underneath the slab?  Is there anything underneath the slab to hold it up in the center, like a pillar?

If you're willing to make the investment (and it will be significant), I think it's possible to make it work.  Based on my admittedly limited experience (i.e., none), my guess is whatever architect you hire to do this will have you do something like this:

If you're going to go through the expense of fixing the basement, make sure to put in some safe-egress window wells.  Not sure of the correct name, but they're the windows that allow you to escape from the basement or allows firefighters to get in.  Up here, if you put a bedroom in the basement, it has to have one of these windows in order to be a "conforming bedroom."
Jami McBride
gardener

posted 10 years ago
No it shouldn't smell, but that's what I'm saying, your seeing it in a raw state now.  If it was finished using Mike's methods and had cross ventilation design into it, well that would be a different story altogether.

I think the biggest problem that house/basement has working against it is the hill on the uphill side.  All the water that lands on that upside will run down to the house/basement. - yikes!

That's your biggest concern, the up hill contour of the land.

So the questions become:  Can you excavate the up hill side?  Can you finish off that basement so it is watertight? 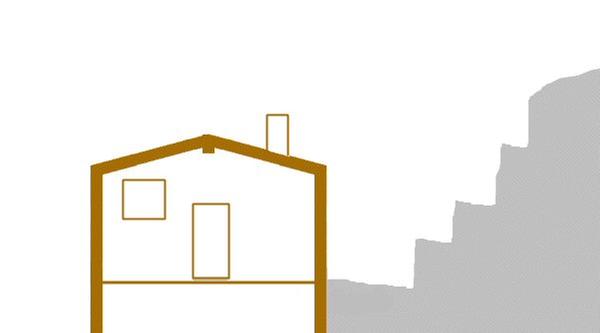 Posts: 59
Location: NW Ontario
posted 10 years ago
I would have to say that if all that is holding the earth back is some sheet metal, you might potentialy be looking at a death-trap. Clay soils are heavy, especially when saturated with water and will creep inward over time with unbelievable horizontal pressures (like a ratchet). Also, when warm humid air is allowed to enter a relatively cool environment (like an earth pit) it will condense and potentialy lead to mold problems. There are plenty of examples of wicked rot and mold problems in vented crawlspaces. Also, be careful about toxic soil gasses (radon) in a space like that.
Posts: 278
Location: Iowa, border of regions 5 and 6
posted 10 years ago

Old hammy wrote:
Also, when warm humid air is allowed to enter a relatively cool environment (like an earth pit) it will condense and potentialy lead to mold problems. There are plenty of examples of wicked rot and mold problems in vented crawlspaces. Also, be careful about toxic soil gasses (radon) in a space like that.

That is why in the last 5 or 6 years, the recommendation has been to seal up any vented crawlspaces, making sure you have a moisture barrier (i.e., thick plastic) over the bottom of your crawlspace  and going up the sides.

Emerson White
Posts: 1206
Location: Alaska
posted 10 years ago
If the death trap was dug after the house was built could she just fill it back up with fill dirt? Dallas always has construction going on, I'll bet that a creative person could find someone looking to get rid of clean fill.