posted 6 years ago
Last year, I was invited to come to the Masonry Heater Association's annual meeting in April 2015. To act as an instructor of a workshop and doing a seminar about rocket heaters and the batch box rocket in particular. This is not to be taken lightly, this year there happened to be 125 attendees all together. And in the same time frame six workshops were going, two demonstration projects, two masonry classes and several seminars and mini-clinics. I made a new design for the rocket workshop, an 8" combustion unit and a brick bell with 5' long blind ending benches on both sides. A lot of the masons at the premises highly doubted whether those benches would get warm but it did.

Lasse Holmes aka Canyon acted as my assistant and the rest of the team consisted in no particular order of Donkey, Ted, Jean-David, Alexander, Mike, Francoise and now and then Leslie (Jackson), David, Patrick, Jonathan, Jessica and Damien. They all did a fine job, the whole heater was built in a little bit of over two days. The original design featured a double skinned brick bell, inner skin built out of fire brick on edge. During the build, it turned out there weren't probably not enough firebricks at hand to complete all the workshops so we changed to single skin. Half up in brick and the top half(ish) in firebrick. And during the second day of the build there appeared a somehow forgotten pallet full of firebricks of a slightly different dimension. We decided in a short team consultation to keep the single skin bell because it was almost finished. Now and then the team acted as a fine example of democracy at work, me serving as the enlightened tyrant who took the final decisions. The whole atmosphere was optimistic, with good food and a lot of laughter.

But... this workshop happend to be also a way to learn more about the limits of bell construction. The benches got warm quite quick but in retrospect the bell/benches combo was slightly too large for the bare stovepipe chimney we could use. Since we didn't follow the design in its entirety due to the change to single skin. The first run we did with the bell two courses lower than the final state in order to dry the soaking wet masonry, which worked just fine. Next day two more courses were added and it appears now and then the thing wasn't running as clean as I aimed for.

So being at home and most of my jetlag fading I recalculated what the design ISA was, that of the intermediate heater and the final state. According to the scaling method I used to scale from 6" to 8" system the maximum I could use was 10.4 m2. The design was intentionally tuned down to 9.6 m2, so we could expect it would always work. The intermediate stage comprised of 9.85 m2 which worked fine, wet and all. The final stage, largely dry already ended at 10.3 m2 which appeared a bit too much at times. This suggest the 10.4 m2 of the upscaling process is too large, this should be 9.8 m2 maximum, preferably a bit less when the chimney stack isn't that good. Following this and assuming the used scaling method is correct the conclusion would be that the 6 m2 for a 6" version is too large. This would be more around 5.4 or 5.5 m2, a very important consequence.

The scaling method is the ratio between the 6" riser and the 8" riser's csa. This would be roughly 1.77, so the maximum internal surface area of the 8" system is 1.77 times as large as compared to the 6" system.

I don't have pictures because I have been far too busy. There will be a lot of photo's on the MHA website in a few days. Also, here are the slides of the seminar and a bit more for download plus the SketchUp file of the design. 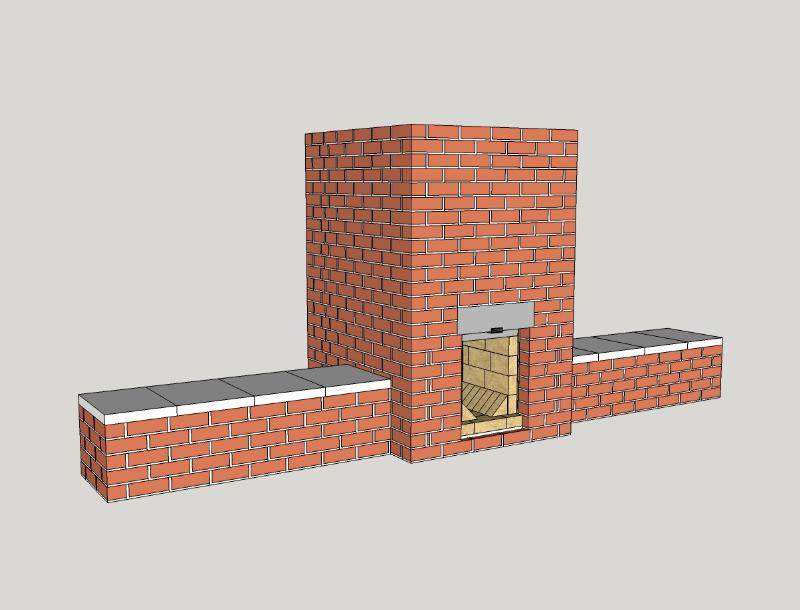 posted 6 years ago
And yes, there's more to tell about this bell implementation. In one of the top slabs we made a peep hole right above the riser. On Friday night we opened it up and installed a mirror of ceramic glass at an angle of 45 degrees right above the hole. This way, one could look right into the riser, seeing the double vortex moving at surprisingly high speed. Regrettably, we had to close down the mirror within ten minutes. The chimney temperature happened to be too low and the hole too large in order to maintain an underpressure in the bell. So the exhaust gases were coming out the peep hole and the combustion was getting a lot worse.

In retrospect, we could have fixed it with a larger piece of the same glass which happened to be there as well. With the larger piece over the hole we could have looked through provided the glass was burning clean. I need to remember that should another opportunity arise.

The benches were a bit different from each other. Just one aspect, the right one one foot to the rear and the other 4" more. Just to make it to look less formal. The unexpected effect was that the right one warmed up quicker than the other and stayed ahead 3 or 4 degrees Fahrenheit all the time. Conclusion could be that the left one was situated a little bit closer to the exhaust opening, thereby recieving cooler gases. So it looks like the benches could be tuned to temperature this way.

Alex Chernov remarked there should be probably a horizontal devider in the transition between bell and bench in order to separate the in and out streaming gases. We made provisions during the build to open up the bench and on Friday morning we did before firing up. He placed the devider as he had seen Lars Helbro doing about halfway the height of the transition opening, we closed the bench and started up. There was some difference, but not the expected. The right bench which was warmer before now reached the almost exact same temperature as the other one. Apparently, the devider didn't turned out to be an advantage but a restriction instead. So, this could probably used as another way to tune the benches, after the build is being done.