posted 7 years ago
What are these?

They appear hollow inside.

And if you know, unless they are wildly rare or useful, could you tell me how to get rid of them? (I tried last fall, but, obviously, it didn't work, since they're back) 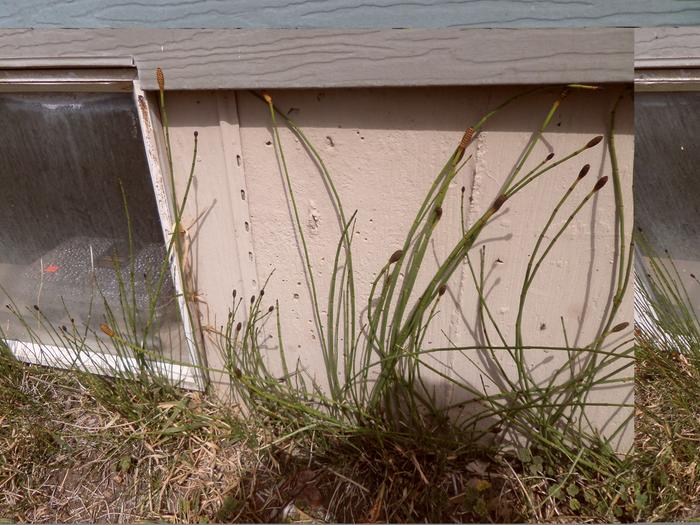 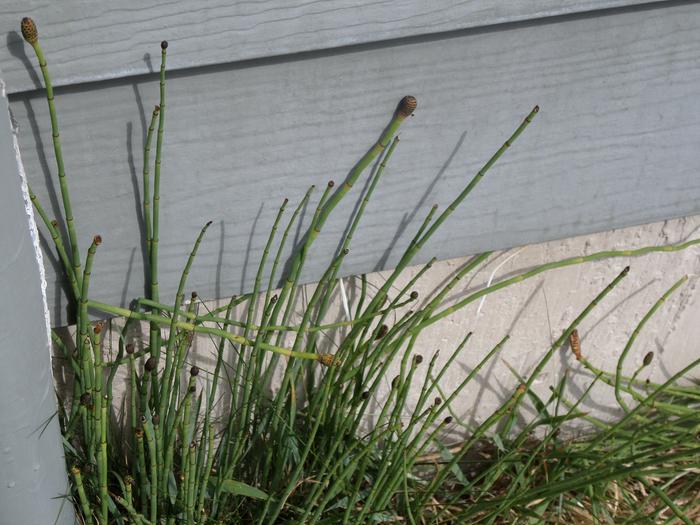 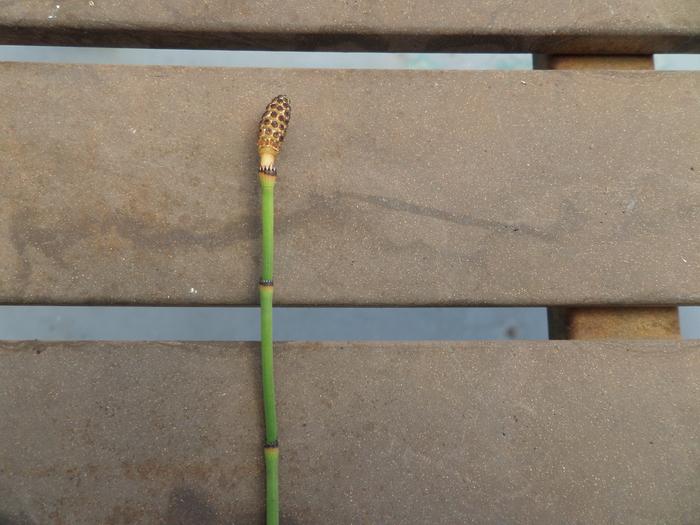 They're rich in silica. Can be used as-is for scouring pots. We make a tea to spray on squash leaves late in the season to discourage powdery mildew.

They're benign. I wouldn't go out of my way to remove them.
Vera Stewart
pollinator
Posts: 454
Location: 7b at 1050 feet, precipitation average 13 inches, irrigated, Okanagan Valley
146
I like...

posted 7 years ago
Thanks for the ID.

I want to remove them because they swish and knock against the side of the house in wind, and also because I think they might be encouraging spiders and other bugs to crawl into the siding. Perhaps I can transfer some to another location in the yard. I'm a bit puzzled as to how these are growing, as it seems they should be in wetter locations.

Roberta Wilkinson
pollinator
Posts: 185
Location: Washington Timber Country
50
posted 7 years ago
I thought that was a little odd too, when you described your location as arid. My thought: maybe the foundation is functioning like an air well and condensing moisture out of the air, making a little moister pocket up against the house. Keep that in mind, because you can possibly use it to your advantage for some other plant you do want that's looking for a little extra moisture.
Vera Stewart
pollinator
Posts: 454
Location: 7b at 1050 feet, precipitation average 13 inches, irrigated, Okanagan Valley
146
I like...

posted 7 years ago
Now I'm conflicted - maybe I should just leave these guys where they are, and clear the area around them to reduce bugs. If they're surviving there because of an air well effect (good explanation!) moving them will kill them...probably I'll try moving a few and see what happens. Thanks for your information.

•Equisetum x ferrissii (StL)
Equisetum x mackaii (StL)
Most of those in Equisetum subg. Equisetum are still unknown in North America, but they should be sought, especially north of 45° N latitude.

•A genus of primitive rhizomatous, perennials related to the ferns.
•Leaves in whorls, reduced and fused into a sheath at the stem joints. The number of leaves usually equals the number of stem ridges. Food is produced in the stems and branches (photosynthesis), the leaves being so reduced in size as to be nearly useless.
•Stems upright, hollow, and cylindrical; jointed in appearance, with longitudinally ridged surface containing silica deposits. Stems with hollow center and series of small carinal (under the ridges) and larger vallecular (under the valleys) canals. Stem ridges traversing length of internode and continuing into sheaths, terminating in sheath teeth. Stems arise at close intervals from long, creeping, underground rhizomes, often forming colonies. Separate fertile and sterile stems may be similar, or distinctive, in appearance. Fertile stems emerge before the sterile, bearing a cone at the tip. Aerial stems of Equisetum vary considerably in habit and appearance, even on individual plants, because of environmentally induced modifications affecting height and branching.
•Branches absent or produced at the nodes
•Cones at tips of fertile stems; composed of whorls of hexagonal, sporangiophores bearing sporangia
•Spores tiny, green, each with four hygroscopic, strap-like structures known as elators.

Identification:
•Identifiable as horsetails by the upright, hollow, jointed, cylindrical stems with inconsequential and easily overlooked leaves.
•Distinguished from one another by presence or absence of branching, number of leaves, and habitat.
•Field Marks ◦presence or absence of branching
◦branch segment length at point of origin
◦branch angle at point of origin
◦size of central stem hollow and adjacent channels, if any
◦number and color of leaves (sheath teeth)

Identification of North Country Equisetum
•Distinguishing between the two subgenera of Equisetum, the Horsetails (Subg. Equisetum) and the Scouring Rushes (Subg. Hippochaete) is a fairly simple matter. Horsetails have branches, in regular whorls, giving them a somewhat bushy look. Scouring Rushes lack branches or, when branches are present, they are few and very irregular. Because Equisetum are rarely encountered as lone stems in the field, a quick survey of the clump is sufficient to determine subgenus.
•If you have a Horsetail (a branched Equisetum), look closely at the branching. If the branches themselves divide into multiple branches, then you have Equisetum sylvaticum, Wood Horsetail. The leaves (sheath teeth) will be reddish and papery. If the branches are themselves unbranched look at the segmentation of the branches.
•If the first branch segment at the stem is noticeably shorter than the remaining segments, examine a section of stem: ◦If the stem has a very thin wall with a very large hollow in the center, then you hav eEquisetum fluviatile, Water Horsetail. It is typically found in an aquatic habitat (usually growing in water) and will have more than 11 leaves (sheath teeth) per joint, often black throughout or with narrow white margins.
◦If the stem has narrow central hollow with large side channels, then you have Equisetum palustre, Marsh Horsetail. It is typically found near, but rarely actually growing in, water. It will have stem joints with a stretched or elongated appearance and fewer than 11 leaves, with prominent white margins and dark centers, per sheath.

Distribution:
•Global, with many of our species also found in Europe and Asia.

Fire:
•Fire kills above ground growth, but most species survive due to the deep and extensive rhizomes, from which the new, post-fire stems sprout.

History:
•Equisetum is the sole surviving genus of a complex group of primitive plants which covered the planet during the Carboniferous period more than 300 million years ago.

Uses:
Reproduction:
•By spore and vegetatively by rhizome
•Primary means of reproduction is asexual; conditions for the production of gametophytes from spores are limited and relatively rare.
•Asexual reproduction: Spreads from extensive rhizomes. Even short segments of broken rhizomes will sprout. Overwintering buds develop at the nodes of the rhizomes.
•Sexual reproduction: ◦Spores are equipped with elaters, long appendages that expand and contract with changes in humidity. Elaters function to dig the spore into the soil and to tangle spores together, thereby creating a larger propagule and increasing the probability that prothalli will be close enough to ensure fertilization.
◦Elaters may also aid in wind dissemination. Spores released by the cone bearing stems are dispersed by wind or water. The spores are thin-walled, short-lived, and quickly germinate under moist conditions.
◦Spores germinate to form prothalli: tiny plants only a few cell layers thick that are usually either male or female, producing only antheridia or archegonia, respectively. Swimming sperm are released by the antheridia and require water for transport to the egg-containing archegonia.
◦After fertilization takes place, the sporophytic generation (the identifiable large plant) develops in place, growing out of the prothallus.


I think you would be best served to just leave them where they are growing now, the space is apparently good habitat for this ancient plant.

posted 7 years ago
Yes, I'm leaning towards leaving them alone now. And I think I'll try harvesting one or two and test how well they actually scour!

posted 7 years ago
I have solved the mystery as to why these rushes grow by the side of the house!

They've been (accidentally and occasionally ) irrigated. When the irrigation zone in the grass by that side of the house is let run, it sprays the house, and the house siding creates a lovely little waterfall right down to the rushes. They grow where the waterfall occurs, and don't grow along the wall where there is no "waterfall."

Thus, these plants that like wet have survived in the semi-arid alongside grass that gets literally crunchy underfoot.

posted 7 years ago
Good detective work! So if you decide you want more of these rushes, you now know one way to give them what they need.

John Devitt
Posts: 39
Location: Belfair WA
2
posted 7 years ago
They spread by rhizomes and are nearly impossible to get rid of. Here in the PNW they can be a big problem. If anyone can tell me another use for them other than as a scrubber I would like to know.
Roberta Wilkinson
pollinator
Posts: 185
Location: Washington Timber Country
50
posted 7 years ago
I've been using horsetail tea as a toner on my face and neck to treat acne with really great results, so there's one use. It only takes 3-4 tablespoons of dried herb to make a cup of tea that will last for weeks though, so you're not going to go through it very quickly that way.

As mentioned above though, we make big batches to spray on our squash leaves in the fall to combat powdery mildew. That's just a matter of cramming as many as will fit in the biggest stock pot, boiling, straining, and applying the cooled solution with the backpack sprayer.

posted 7 years ago
Roberta, are you at Inspiration Farm as featured in Paul's videos, including the horsetail on squash spray...? I'm curious if this would work to halt powdery mildew on other plants like chard. Do you dry the horsetail for the big batches also? Any ideas about the science behind this?
Thanks
Roberta Wilkinson
pollinator
Posts: 185
Location: Washington Timber Country
50
posted 7 years ago
Nope, we just saw the same video.

We don't dry the horsetail for that use, just bring it in and boil it up. I can't think of any reason that the tea wouldn't work on other leafy plants prone to mildew, squash are just biggies for us because we like to leave them going until pretty late in the season, when it starts to get damper and cooler out.

We don't have any hard science on how or why it works, but my partner theorizes that the high silica content reinforces the cell walls of the squash leaves, leaving them less vulnerable to attack by fungus and disease.

posted 7 years ago
hau, Roberta and Tim, Here's some hard science on the horsetail spray for mildew prevention.

This plant is an Extreme Diuretic

It has been used as a treatment of: diabetes, obesity, swollen eyes, cellulite, gout, hemorrhages and osteoporosis.
It also has dangers since the alkaloids can be poisonous.
It is mostly used as a fungicide for plants or in external applications on humans.

when used as a fungicide it is the combination of acids as mineral salts along with the alkaloids that are effective. When a decoction of horsetail is combined with a decoction of stinging nettle the fungicidal action is increased.

hope this info helps you out.