on the farm I am volunteering we are planing to convert part of our pasture to alley cropping (hazel, Siberian pea shrub and berry's in the rows and vegetables in the alley's) . The pasture is invaded with different 'weeds': couch grass (Elymus repens) and ground elder (Aegopodium podagraria). We know the plowing is far from ideal and we know that with these weeds you don't want to disturb the roots because all root peaces will grow into new plants. But with the size of the area involved, around 10000 sft (10 00 m2) , we see no other practical alternative than plowing. After plowing we want to go over the area with a kind of harrow (see attached picture). This we heard, will pick up a lot of the roots, so it will be less regrowth. After this we will sow a green manure crop (probably rye-grass, that has worked best in the past) for some years. Hopefully this will save us a lot of hand weeding or covering this big area with a sheet-mulch. Our questions are:
After plowing and harrowing, could it be wise to let the 'weeds' come up and harrowing them under again, so as to let them use up their root reserves. This to give the cover crop a better chance? Is the harrow in the attached picture a suitable tool?
Then also a question about the plowing itself. We plan to plow as much on contour as possible, in our case north south direction. But than on the end of a line of plowing, we take the plow from the soil, turn around and start again. But this leafs us with a strip of grass on each end of the field. If we plow this, we will go down the slope (around 2 m fall on 50 m). is this a problem?
The farm is located in the south of Sweden, we have a soil created by the glaciers. 60 cm of the soil plants can grow in, there after it becomes so hard, you need a pickaxe to dig in to is.
Thank you in advance, and all suggestions are more than welcome.
Bram
DSCN5292.JPG 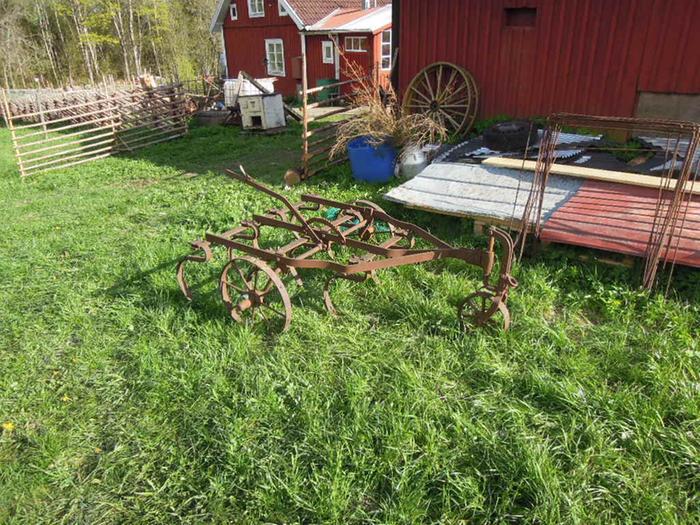 posted 5 years ago
I have very little experience with land conversion or farm equipment directly, but I am getting somewhat familiar with things from working with large-scale wheat farmers. I would suggest not worrying too much about a strict on-contour plowing. It's a great idea to implement as much as possible, but not worth messing with picking up the plow to turn it around - I would recommend just turning around with it in the ground. The edges of fields are usually different from the interior anyway.

The harrow in your picture looks like it would be pretty aggressive to me. If you're doing one-time soil prep for the use conversion, I think it would work, but that level of disturbance often probably isn't great.

As an alternative, have you thought about running large numbers of chickens, and lay down straw, manure, etc. for them to pick through and till under? You could do a portion of the field at a time, and after letting it rest for a few weeks to let the weeds sprout, run the chickens back in again. It might take a year or two to get the field cleaned up enough to do what you want with it, but you'd be a long way towards getting your soil conditioned and fertilized.

Those with more experience than I, feel free to contradict anything I've said.

I don't know either of those species, but at my place, plowing is an excellent way of dealing with perennial weeds. Especially if you can turn the sod upside down and bury them deep enough that they run out of energy before reaching the surface... Tilling would be a disaster because it would break them up into a multitude of smaller plants. I like plowing in the fall, that gives plenty of time for the rhizomes to smother. Then harrow in the spring. I think that you'd get better advice from local people that know those weeds than from me. That is a great harrows. I'm undecided about timing... If it were me, I'd wait after plowing until the sod was well decomposed and the rhizomes were starting to re-sprout (3-ish weeks in hot weather). With annual weeds, I like to harrow/till a couple weeks after a good rain when the weed seeds are strongly germinated. For best results, plant the cover crop immediately (before or) after harrowing, and just before rainy weather is expected, so that it leaps out of the ground.

Can't avoid lifting the plow out of the ground at the end of the row, so the choice is whether to plow down the slope on the edges of the field, or leave it grassy. Around here, 4% slopes are not prone to erosion. If it were me, I'd leave a grassy roadway along the east and west edges of the field, just cause I am less likely to get stuck on grass than in muddy clay.

Bram den Teuling
Posts: 2
posted 5 years ago
Thank you for the advice!!

Izzy:
The plowing and harrowing will (hopefully) be a one time action witch we don't want to repeat. It will even be impossible to get into the area with tractor after the design has been implemented. The plan was not to be to fussy, the land generally slopes east, so we will be plowing north-south along the fence line. Your chicken idea we will fore sure discus. The only drawback I can see now with this is that the tree line will be on some kind of raised bed. in the past the chickens tend to level the raised beds. also at the moment we don't have chickens, but in the future we will fore sure. How many do you think we need to get it cleaned?

Joseph:
Last year when making raised beds for the forest garden we added 30 cm of relatively weed free soil form different other places to deepen the soil. We just put it on top of the pasture and sown mostly rye. This had come up well in most places. but now in spring the weeds have come underneath anyway. that's how the idea op trying to remove part of the roots and attempting weakening them arose. We are a bit in a hurry because in 2 weeks a excavator comes to do earthworks, and after that it will be hard to get around with the tractor in the area.

Will also ask advice with the neighbours. hope they know of techniques witch doesn't involve poisoning the land.

On one side we fore sure leaf grass as a road, but on the other side it is already things planted, so we would like to weaken the weeds on that side so they don't invade our growing area's.

Thank you again for the advice, it was much appreciated!!
All the best
Bram
Isaac Bickford
Posts: 101
Location: Okanogan County, WA
2
I like...

posted 5 years ago
Get however many chickens you can afford, fence them in a small piece, and see how it goes. Generally, I like to stock animals heavier and move them more often (at least once a week), but you may need to leave them a little longer and put in lots of manure, straw, vegetable scraps, etc. to build up a good layer to smother the weeds.