Posts: 40
posted 11 years ago
Earlier this year, on a whim, I planted some garlic in my garden. I picked up some extra heads from the grocery, and just stuck them in an unused corner of my veg patch. Well the tops started dieing off a week or so ago, so I've pulled them all up to cure. I ended up with about 30 heads of garlic, but they are all fairly small. I assume this is because I planted them in the spring rather than the fall like I was supposed to. I would guess that the biggest of them are about an inch across, but otherwise they all seem healthy.

I am trying to decide if I should use this garlic in cooking, or just replant it all later this fall, and hopefully harvest some much larger heads next year.  I know that garlic is a plant that will adapt to you garden conditions if you keep replanting it year after year, I am just not sure if there would be a benefit to planting a whole, smallish, head instead of a single clove.

You end up with each clove trying to become its own plant. The heads of garlic push against one another, tilting the plants over near the end of the growing season, but this doesn't do much harm. In fact it's kind of neat to see a cluster of garlic plants opening up like petals of a flower. I think I got three or four decent-sized heads of garlic this way. Many plants must've died from competition.

It probably makes economic sense to break them up and plant them individually, but a little denser & more early than usual to allow for some (self-)thinning and a little time to catch up on growing. I really enjoyed the novelty of it, though, so feel free to not make sense.

A similar experiment: I planted a third of an onion, including intact roots, and it produced a little clump of onion sets, arranged like cloves of garlic, wrapped in a couple layers of onion skin. I think there's a market in onions that behave like garlic, similar to the leeks with a garlicy lifestyle that are marketed as "elephant garlic." Not only does it make re-planting easier, the food is available in convenient, single-use packaging.

posted 11 years ago
The size of your garlic will depend on it's type, soil, if you allow it to flower, etc.
However garlic you buy in the store is usually of the smaller variety (about 1") unless it is marked Elephant-garlic.

Based on your story it sounds like you did pretty well for your first go around.

Want bigger garlic, then buy seed bulbs for the larger varieties like German White, Russian Red, Siberian Red.  Smaller than Elephant, but larger than your typical grocery store variety.
Suzie Browning
Posts: 48
Location: Southwestern Ohio
posted 11 years ago
I have several patches of wild garlic which I harvested a small patch of last year.   This spring I decided to transplant some to give it some room and see how it did.  They were tiny, smaller than my pinkie.

The bundled garlic in the lower right of the image is the wild garlic that I pulled last fall (I did not plant from these, but I will this fall to see how well they do.)
The bulbs above it are what I transplanted this spring from another area.

The two bulbs on the left are the store bought garlic planted in October, with the small one the smallest of all and the larger one the most common size.

I was pleasantly surprised with the size of the wild garlic, especially since it was mearly transplanted and felt it's growth was comparable to fall planted store bought.  I did not cut the scapes so they might have been even larger.  I plan to replant many of these cloves this fall to see if they gain in size with a longer growing season.
garlic.jpg 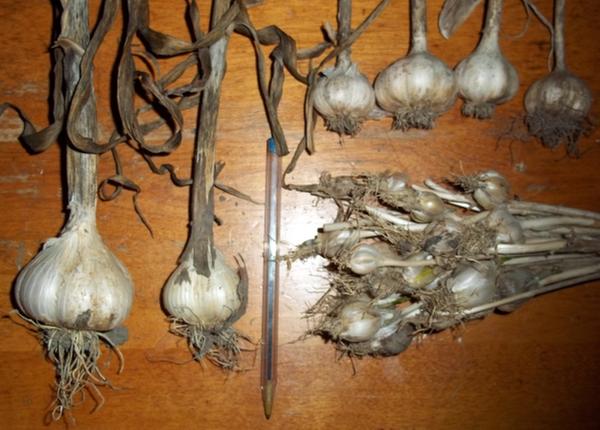 Variety will be important, but I think in my case it was the time of year I planted: the same variety produced much larger cloves the following autumn.

I think roasting garlic (cut in half vertically, maybe drizzled with oil) and squeezing them out once cooked (e.g., to spread on bread), is a pretty good use for garlic that seems too small to be worth peeling raw.

Posts: 0
3
posted 11 years ago
No matter how big or small you can never have too much garlic if you ask me

I think roasting garlic (cut in half vertically, maybe drizzled with oil) and squeezing them out once cooked (e.g., to spread on bread), is a pretty good use for garlic that seems too small to be worth peeling raw.

I wondered what kind of onion elephant garlic was. I bought it a couple of months ago and roasted it like I do with all my garlic. It was usable, but not ideal. Weird texture and stringy.  Barely had a garlic flavor at all.

Roasted garlic is one of my favorite things to cook with! Right out of the oven I like to spread it on crusty bread and eat it just like that.
Joel Hollingsworth
pollinator
Posts: 2103
Location: Oakland, CA
9
posted 11 years ago
I'd like there to be a strain of onion that, like leeks were for elephant garlic, is bred to behave like a garlic plant.

I really like elephant garlic as a pizza topping, sliced thin across the stringiness. I'm planning to make potato soup with it next year, if it grows well.

rose macaskie
Posts: 2134
9
posted 10 years ago
In Spain they have a sort of garlic like leaks but if anything a bit thinner than my little finger call ajetes, normal garlic is called ajo, with the  Jnpronouced as the ch is in the scotch word for lake, loch, in which the ch is pronounced as a sort of clearing of your throat sound.
Ajetes are like small leaks like bigger and much th¡cker than a chive but much nearer in size to a chive than a leek, about chopstick width.
To cook them  you do what Joel Hollingsworth says slow fry them in olive oil, probably good in butter too, but in Spain you tehn when they are cooked make  an ajetes omelet out of them. that is a French omelet with ajetes in it. Delicious.
If anyone is not used to making French omelets with things added to them, well you mix your eggs and then pour them into your heated pan with butter in it or olive oil if you are Spanish and get the omelet half cooked and then add your ajetes, or whatever you plan to cook with the omelet, tinned anchovy fillets cut up into little bits, for something sharp, a bit of tomato paste or pretty concentrated fried goes well with egg, grated cheese etc.

Large divagation on omelets.
I suppose the magic of an omelet is to get the bottom toasted to a sort of buttery toasted taste and the middle creamy and maybe plain or with your bits of flavoring in it. An omelet can be a good way of eating expensive fungi like the delicious saint George mushroom, you don't have to buy much fungi to give some taste to an omleet or a scrabbled egg so eating fungi ends up quite cheap and a hundred grams of fungi which is like a fith of a pound of fungi makes a delicous omlette which will serve several people, I would say four maybe three.

omlette making. two styles.
For people who are new to cooking, lets be sexist,men and such.
For an omelet as taught to me as a child.
Pour your lightly beaten eggs into a heated frying pan with a good knob of butter melted in the pan and wait a little bit till you see you see a certain depth of egg is getting cooked on one side or other of the pan and then you drag that side into the middle of the pan the cooked bit of egg will wrinkle up as you push it into the middle, the bottom part of the egg should be just cooked enough to be able to hold to have formed a thick skin you can push into the middle before you attempt it. Then you tilt the pan slightly so the uncooked part of the mixture flows into the space you have made and you repeat this action from another side of the pan till there is a very little uncooked bit left on the top of your omelet just enough to serve as a bit of sauce to the egg then you turn out the omelet onto a plate flicking it over so it folds in half the cooked bit on the outside and the uncooked bit in the middle.
The other and less French, less glamorous way to cook it, for those who only eat egg that is cooked through, is to let the omelet cook on one side till it is nearly cooked through and then to turn it over onto the other side so the top half can cook through. Agri rose macaskie.

Joel Hollingsworth
pollinator
Posts: 2103
Location: Oakland, CA
9
posted 10 years ago
I dug up a half-remembered passage from Gardening When it Counts, on a hunch that it related to this thread.

It turns out that the allium plant I had wanted (cooks like an onion, grows like garlic) exists, and is called a "potato onion." Only it isn't really an onion, but a breed of shallot.

So for me, and ideal allium patch would include a mix of stiffneck garlic, elephant garlic (actually leeks) and potato onion (actually shallots), inter-planted with fava beans if they can stand soil full of cysteine sulfoxide, otherwise with some small variety of vetch vining through from remote roots. I'm going to approximate that as closely as I can manage over the next couple months.

An interesting side note: Steve Solomon recommends planting large cloves early, and small ones late, in order to stretch out the harvest time for as long as possible.