Vincent Alexander
Posts: 50
1
posted 7 years ago
Hello, can yall recommend a brand, or resource for purchasing hand crank juicers, food processors, etc... made of Stainless Steel preferably (I hate plastic or chemical food processors).. I'd like to avoid the need for electricity for now, although an electric device would still be cool because I do intend to have access to electricity, I just think it's great to keep it simple, and I want my devices to last a lifetime!

Id like a juicer for greens/grass, and also something for juicing berries, apples, fruit/veg... Also a PRESS for SQUEEZING/Filtering.. And maybe something for grinding nuts, and grinding meat, etc... I'm looking to collect a small arsenal of tools that will last a lifetime and not looking to break the bank! I hope there is an old fashioned company out there that is still making them like they used to! Your suggestions please! THANKS

posted 7 years ago
I don't have any such machines (though I'd love to), but it made me think of Lehmans. They have both a steam juicer (https://www.lehmans.com/p-285-10-12-qt-stainless-steel-steam-juicer.aspx): 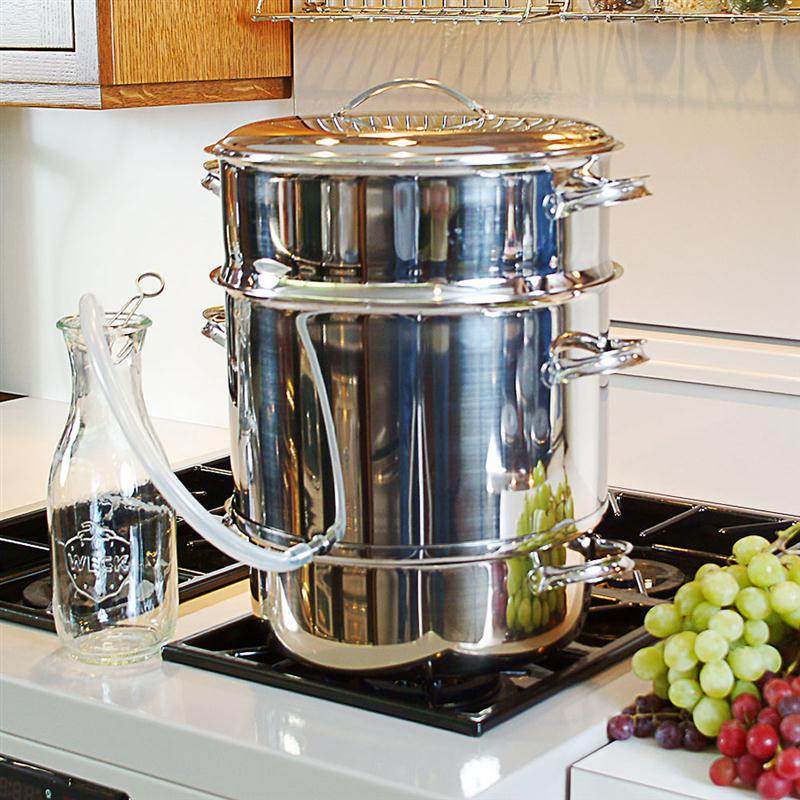 As well as a food mill: https://www.lehmans.com/p-876-roma-food-mill.aspx 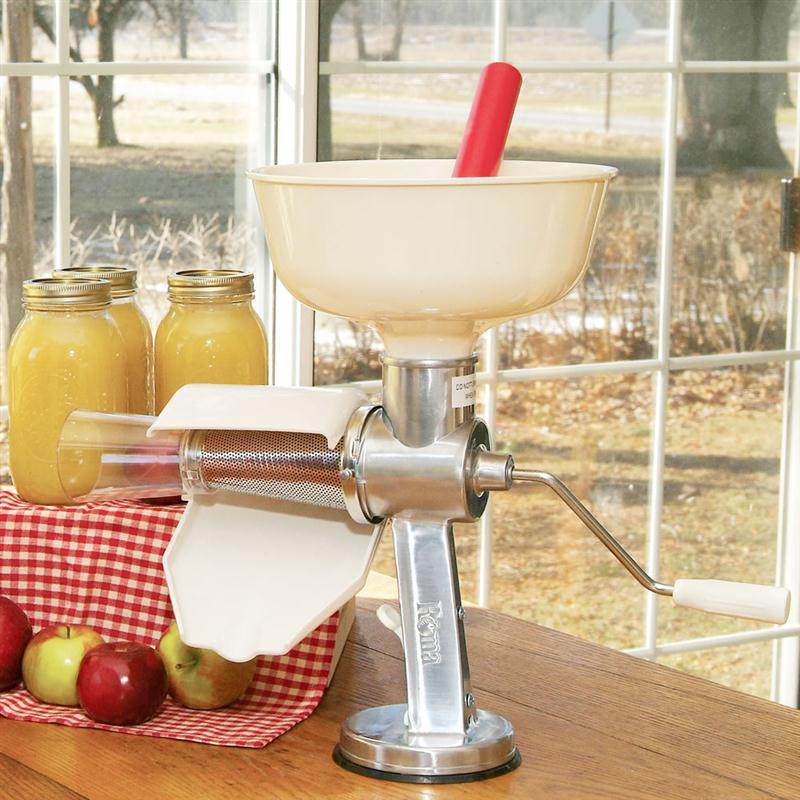 The food mill does have some plastic, sadly, but it doesn't seem to be in contact with the fruit much...

Both of these have really great reviews. Hopefully someone else will come along with actual first-hand experience for you!

David Livingston
pollinator
Posts: 4328
Location: Anjou ,France
246
posted 7 years ago
I was amused to see that the food mill mashes potatos;-) I use either a fork or a potato masher much easier .
How about one of these https://www.piteba.com/index.html

Holly Gates
Posts: 17
Location: Somerville, MA
5
posted 7 years ago
I have a bit of a fetish for hand cranked food processing machines!

Here is what I've got:

- Antique meat grinder
I have antique Enterprise grinders (#5 and #10), both from ebay. I did some restoration work on the #10:
The #5 is sufficient for my needs, but the #10 would be better for doing large amounts of food. I've purchased new choppers and dies in hardened, ground stainless for both models and used them for grinding pork & fat for sausage, nixtamalized and moist whole corn for tamales, and sprouted einkorn for breadmaking. They work better than the food grinder I used to use on my electric kitchenaid. There is at least one company who sells a new made copy of the enterprise #10 in stainless, which is probably more practical, but I kind of wanted an antique.
http://tooling-up.blogspot.com/2013/01/enterprise-10-antique-meat-grinder.html 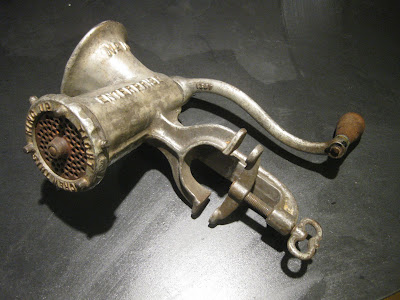 - Rotary food mill
After borrowing a friend's for a number of years, I got my own vintage all metal Squeezo. These are actually available new but are quite expensive. I got mine on ebay, but it only came with one nickel plated steel screen. Later, I bought a set of three new stainless screens, which is great since I can put them through the dishwasher. This rotary food mill revolutionized my apple sauce making and made it much much faster. Every year I make 20-50 quarts of apple sauce from either self-picked or farmer's market apples. The Squeezo allows me to cook apples down with skins and seeds and put it all through the mill afterwards to separate. Originally I tried this using a Foley style mill and it was unworkable (way too slow), but the Squeezo is incredibly fast and efficient.
http://tooling-up.blogspot.com/2014/09/apple-saucing-2014.html

- Butter churn
I have a Dazey #40 glass butter churn, also from ebay. Perhaps not everyone wants to make their own butter, but I like to do it once a year or so. This is the only way I know of to get organic, low moisture, cultured butter from local grass fed cows.
http://tooling-up.blogspot.com/2012/07/homemade-creme-fraiche-butter.html

- Grist Mill
An antique C.S. Bell #2 grain grinder, from ebay. I use it to grind all my own corn for polenta and cornbread, and sometimes use it on wheat or other small amounts of grain I've grown in my yard. Used it for secondary threshing on some grain last year, but it was probably not the right tool for that. I originally got it for cracking malted grains for use in brewing beer, which is does a great job at, but I mainly brew hard cider now.
http://tooling-up.blogspot.com/2013/01/vintage-cs-bell-company-2-hand-grist.html

- Apple peeler
Antique cast iron Reading peeler. It is lightning fast once you get the hang of it and looks great both in operation or hanging in your kitchen. I had to do a little restoration on mine as it came before it was ready for use. Lehman's sells a new one with seemingly the same exact castings, though they are not cheap. Like most of this stuff, not worth setting up and cleaning for very small amounts of food, and not really the right thing for very large amounts. But a good match to the amount of food I often find myself wanting to process.
http://tooling-up.blogspot.com/2012/10/apple-pie-and-pie-preparation-strategy.html

- Sausage stuffer
I've got in an Enterprise sausage stuffer from ebay, but I've yet to clean it and fix it up to ready it for use. Looks awesome sitting on the bookshelf though. I'm looking forward to stuffing some sausage with it sometime in the next couple years.

- Cherry Pitter
Cast aluminum, from ebay. Used it to pit probably 12 quarts of sour cherries we picked a few years ago. Worked ok if not great.


Other things I've got in mind:

- Corn sheller
We are growing some popcorn this year and I'd like to grow parching corn next year. Those cast iron corn shellers look neat, though at the quantities I'm going to grow a machine is not necessary.

- Handcrank KitchenAid adapter
I'd like to machine up a stand with a taper and set screw to take kitchenaid attachments and clamp onto the counter. The gearbox broke on my kitchenaid mixer, but I've got all these attachments which would be fine to use if cranked by hand, and quieter too.


Thoughts:
- Ebay is a great resource for this kind of thing, both for new and vintage equipment. Of course this comes with some caveats of which I'm sure you are aware.
- Lehman's sells a bunch of nice handcranked stuff for higher prices, but without wear and with a warranty.
- Cast iron can be very functional and opens the door on a whole world of vintage stuff; stainless is nice, but really only available in new tools