D. Moonstone
Posts: 38
Location: Canada, Zone 3
1
posted 4 years ago
Am I nuts? lol Do you think this is going to work? I have wheat straw bales with the stems so short it's kind of like chopped straw, but it's all I have available to me along with one inch rebar. It's for a straw bale and plaster barn.
Jay C. White Cloud
Posts: 2413
46
posted 4 years ago
Hi Andrea,

Can't use rebar or any metal at all inside the interstitial zones of mass walls. I am not clear on the application. Could you expand the project parameters a bit further with perhaps drawings or photos of something similar?

Is this not the method normally used to do load-bearing straw-bale walls?
image.jpg 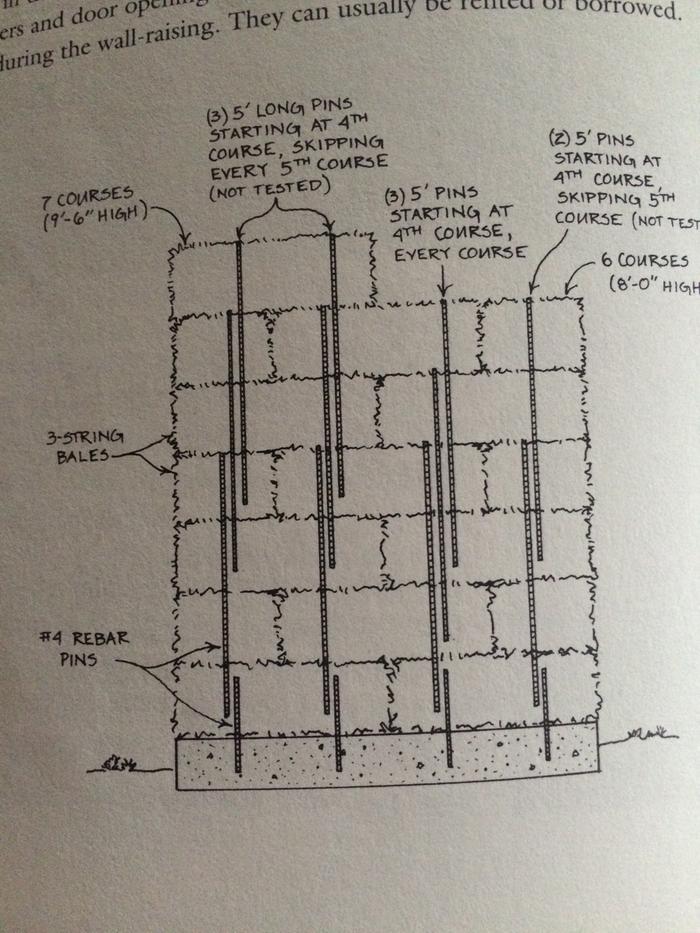 Yes, unfortunately rebar was and still is recommended by many trying to get into "natural building." There is a great deal of misinformation out there both in books and on the net. Iron metals, whether rebar, lath, wire screen or even just wire ties are going to oxidize, it isn't a matter of if...but when and how fast. After this you get degradation from "rust jacking" which is the force that is tearing our concrete and steel infrastructure apart, among other issues.

The other reason to not have iron...or any metal for that matter...is the ambient temperature differential between the two materials. Moisture...especially interstitial moisture, is a huge issue with straw, or any natural material including even commercial cellulose. When there is metal, these elements become condensing surfaces for the moisture vapor in the wall to collect on because of the temperature differential and material characteristics of alloys in general.


Andrea Stone wrote:Is this not the method normally used to do load-bearing straw-bale walls?


So, in a nutshell, no it is not standard..."good practice"...to have any metal in SB or related natural building systems. What is suitable, and has been employed through history with this type of building modality...is wood. Rope to, in some applications can be used as "tensioning bands" and "strutting systems." I would also suggest here, unless this is a professionally designed and facilitated SB structure with PE approval on structural diaphragms and load paths that the straw bales never be "structural" and only employed as a "insulative layer" that is structural only to itself and not even the fenestration of the architecture. Many risk this all the time with DIY builds of this nature, and it usually is a matter of "when" not "if" something within the design begins to fail.

One way to think about it is if the SB is utilized as not only insulation, but also the structural matrix and there is a need to modify, repair or alter this thermal layer, you then have to consider the dynamic loads that get shifted. If something happens unforseen to this thermal layer, then too is the structural integrity of the building jeopardized and able to fail. If those risks and concern are within the comfort zones of the "owner/builder" and local building officials allow it...then as they say...proceed at your own risk.

I would close with pointing out that in the diagram offered, that the SB are sitting directly on concrete. This should never...ever...take place. OPC concretes act like sponges holding moisture and also have a different ambient temperature differential and characteristic to SB further exacerbating the issue with condensed moisture.

My other concern is for "bail integrity." I know of the PE approved SB structures I have seen or been part off, there are clear standards for straw quality and length...and short will not do it. I would also share, that the current trend is moving away from SB structures in general and toward "light cobb" or "slip straw" infill systems which is what I recommend to clients and students over SB now. Your bales would be fine for this as all you need is the straw and clay with a timber frame armature to support the walls and roofing system.

Sorry, as I imagine this isn't what you wanted to read...but better to learn it now than later...

Cob is not insulation or moisture-resistant enough for my climate. (It is too damp to dry quickly enough here, and the temperature can drop to -50° in the winter).

I'm building a temporary barn that needn't last longer than a decade, so I don't mind if it degrades over time.

I won't be using concrete at all. I am planning to use railway ties and a layer of lime plaster as mortar between the ties and bales.

I always encourage folks to build with what they are comfortable with and can learn to understand...

However, cobb is a vast and generic term for a myriad of systems. Cobb can be used very effectively in your area if facilitated correctly and design well for the building it is employed in. It doesn't get moister or wetter than the tropics and cobb is a prevalent form there as well. North Europe also has similar freezing seasons yet still build successfully with cobb. The other clear option is only using a cobb system for interior walls to store energy and use a more insulative cobb mix for exterior walls or something like mineral wool insulation where you require the highest degree of climate protection. These elements of insulation can be mixed and matched within a "thermal envelope."


I'm building a temporary barn that needn't last longer than a decade, so I don't mind if it degrades over time.

I won't be using concrete at all. I am planning to use railway ties and a layer of lime plaster as mortar between the ties and bales.

So you think I should frame it then?

For ten year lifespan...things look good for you then!

Glad to read that no concrete will be used, as the lime will be best.

Yes...I always encourage a superstructure of a timber frame if possible...and since its a barn...well, they are traditional made that way...

Good luck and would love to follow your progress with pictures...
D. Moonstone
Posts: 38
Location: Canada, Zone 3
1
posted 4 years ago
Alright! Will do.