Stephen McDonald
Posts: 5
posted 6 years ago
I live in North West Arkansas plant hardiness zone 6b max low winter temp is 0 to -5 degrees fahrenheit average is 30 to 40. Summer max is around 100 with average of 80 to 90 my location is relatively humid.
I am wanting to build a self sustaining home stead. I have narrowed it down between strawbale and earthbag there are a couple of each in my area and have tried to contact the owners (I've done everything short of knocking on their door) with no luck and don't want to be too pesky, so here I am.
We are on an extremely tight budget (about 20,000usd) I already have sewer, well and a level pad. Which ate up more of my budget than I had planned (have about 10,000 left). I am living in an rv with my wife and 18 month old little boy which is miserable due to its complete lack of efficiency. My AC unit runs from 8am to about 10pm non stop to keep it close to 80deg (closer to 85 if there is any cooking going on) and am terified to try and spend a winter in it going broke and shivering while trying to heat the darn thing..
This all being said I would really like to get something dried in by September and finished out by the end of November (fall and spring are wonderfully temperate here) that will be comfortable for the winter. I have an abundance of cedar on the property. The original plan was to do a cedar post and beam strawbale infill with lime plaster. But just the substantial foundation and amount of concrete that I need (to achive the high and dry factor for the longevity of strawbale) comes close to using up the rest of my budget plus the extra precautions that have to be taken to avoid moisture, mold, bugs, rodents ect. Has me leaning towards earthbag using my cedar posts for roof rafters and to frame out the windows. But that doesn't give me any insulation (which I am assuming that I need in this climate) I have a bunch of ridged foam insulation harvested from a chicken house that was being torn down that I plan on insulating the foundation and slab (hopefully going to do an adobe slab floor, I have yet to get a soil test done to see if I have enough clay in it.) but I didn't know if there was a good way to fasten the ridged foam to the outside of the earth bags then then do metal lath and just stucco over that?
I've done a lot more research on strawbale since it was the plan for the last 6months or so but now with the lack of funds I'm leery to embark on a project as sensitive as strawbale. Also I should probably throw in that I've little to no building experiance despite that I plan on doing all the work myself. I'm pretty handy when something breaks or odd jobs around the house but never embarked on such a huge project.
Hopefully I didn't leave anything major out. I greatly appreciate any input!
Thanks,
Stephen.
(I posted this in both strawbale and earth bag)
Andrew Jackman
Posts: 28
Location: Salt Lake City, UT
posted 6 years ago
Regarding time:

Everything I've seen with regards to earth bag construction indicates that you'll be spending a LOT of time building the structure. Even with a team. I've studied straw bale much less, but I don't think time is nearly the problem. It just takes a lot of muscle and time to fill those bags. Regardless of which you choose, you'll also have to talk to the county inspector to make sure he's on board with your plans. You may go to his office and ask him for the plans of the structures that you mentioned and ask about completion times, which seems to be your biggest concern.

If I were trying to get a home done in a month (which is basically what you're asking) and on a budget I would go with CMU construction. It takes a little practice to make it beautiful, but never really seen anyone complain about the time to completion.

Choose what you will, each has their drawbacks from an idealistic POV. Earthbags use woven polypropylene bags and all the staw bale construction I've seen ends up using cement pillars for support because county inspectors won't approve straw bales as anything other than an insulator. Since you've already put down a cement pad, I'm assuming it isn't that big of a deal for you either way.

Alder Burns
pollinator
Posts: 1614
Location: northern California
233
posted 6 years ago
I have helped work on projects featuring both, and the main idea that comes first to mind is that strawbale is a LOT quicker, since the "building blocks" are basically prefabricated and all you do is stack them. With earth bags, usually, you are filling the empty bags and then stacking them. It might cost less money but what of the cost in time? The strawbale should be stuccoed, inside and out, and this can be tedious too, but technically you could be living in at least part of it while this is being done.
you might consider something small and doable, using whatever technology, so as to have something else to winter in, even if it's an additional, well insulated shed that attaches to the RV with a woodstove in it. That way the time pressure is off and you can continue to plan, and save; or, if you go with earthbags, start.....and perhaps if you have enough help and the space is small enough, be done with it by winter after next!

Alder Burns
pollinator
Posts: 1614
Location: northern California
233
posted 6 years ago
iI've also seen some excellent designs which combine these two techniques, with strawbales and their excellent insulation on the northward side, and earthbags, with better thermal mass, on the south side with a good roof overhang....so the mass catches the winter sun but is shaded in the summer.
Terry Ruth
Posts: 698
26
posted 6 years ago

Regardless of which you choose, you'll also have to talk to the county inspector to make sure he's on board with your plans. You may go to his office and ask him for the plans of the structures that you mentioned and ask about completion times, which seems to be your biggest concern.

Any Building and safety that does this is in violation of copyright law....People, some, have to pay money for plans. Architects, builders, make thier money selling them not giving them away. It can take ALOT of time to develop them and they are not meant to be given away for free.

I fail to see how the rest of the house can be built for $10,000. Provide how much of that is going to windows and door schedules, HVAC, plumbing, electrical, etc...that is available for the envelope and we can go from there. Include in that cost a soil test without no advice can or should be given. We need to know what wind and seismic zone you are in as well or one could be putting their family in more harms way than living in a RV despite the high cost of HVAC. I'm pretty sure Ark is designing to 90 MPH wind in Seismic zone B but check. The state of Arkansas follows IBC 2006 (more applicable to commercial buildings) for homes old and out-dated, we need to know what building codes are being locally enforced at the building site if any. Just because a house exist or is grandfathered in does not mean it is currently allowed. IBC 2006 does not have a code path for strawbale or earthbag.

I know what it's like living in a RV, like to help out but need more info.

Stephen McDonald
Posts: 5
posted 6 years ago
Building code is not an issue, there are none in my county. Seismic zone and wind? I looked around on Google but may not have been searching for the correct things, something about the new madrid but that's all I could find. I belive that I have a pretty good chance at getting dried in for around 8000 I'm going to have to buy wire (to secure insulation and lath), barb wire, gravel, dirt, bags, lath, windows and plaster (stucco) but other than that I belive that I have everything that I need. I've got lots of rigid foam insulation and logs. My foundation is dug it will be about a 1400 sqft (outside) and 1200 sqft (inside) going to have a loft that's about 300 sqft for the kids bedrooms. If you need any more info just let me know. I appreciate all the advice and help.
Stephen McDonald
Posts: 5
posted 6 years ago
Here is a VERY rough sketch of what I'm doing I have a lot better sketch to build off of but I don't have access to it.
20150730_223030.jpg 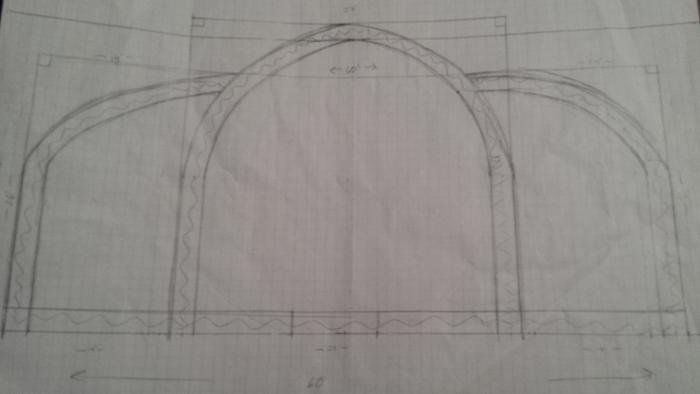 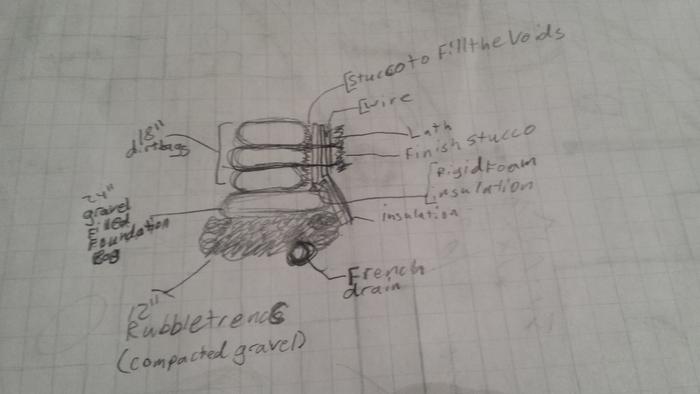 Terry Ruth
Posts: 698
26
posted 6 years ago
Your in wind 90 MPH zone, and if in the NW Seismic Design Category (SDC) B low activity and concern, both like me. You can see by the map if you were in SE there would be a big concern. Do you know where your frost line is, what depth? Ours in KS are around 18". Foundation depth should be a good 6" below frost to help prevent heaving.

1. I need a property address to take a look at your soils and min. insulation requirements, PSF (pound per square foot) compression soil capability. Do you have a plastic index (PI) test of the soil? I'll run a web based site soil survey to get an idea. If you are not comfortable posting that send me a email below, or purple moose. I will post the report for others to see and learn but, I will keep your address confidential upon request. A pic of the dug footing and site too.

2. I need a dimensioned plan view, post a hand sketch that's fine. Do it with a dark pen and re-post the front view above (I cant see all the dimensions).

3. What type of foam do you have and how many square feet? Is it EPS, XPS, polyiso, or?

5. When you say you do not have access to better build plans what do you mean? 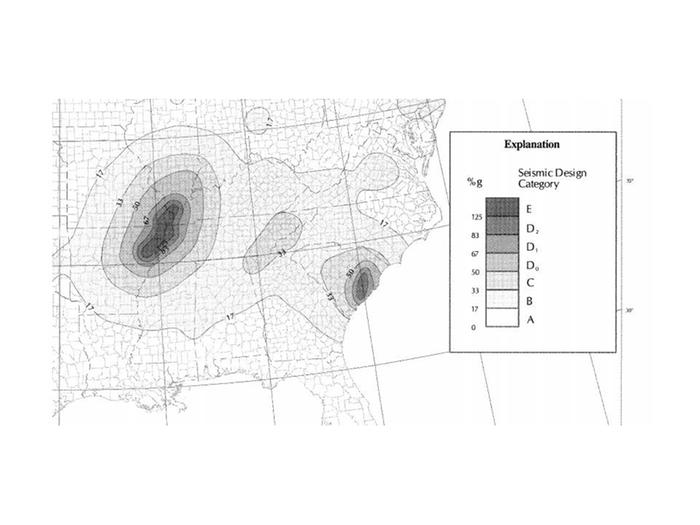 Deagen Demientieff
Posts: 39
1
posted 6 years ago
steven! go earthbag. you will save money and your house will be stronger! its a lot more work but its worth it!