posted 4 years ago
This year I planted a bunch of okra seed from a couple packets and got exactly one plant that grew under my conditions (neglect, East Tennessee). This is a great okra plant, though: tall, productive, and still going now (although much more slowly than in summer, of course).

I saved quite a bit of seed but would like to increase genetic diversity. Does someone in Appalachia -- ideally East Tennessee -- have some seed from a good okra plant they'd like to trade? I also have enough butternut squash and wild-type tomato seed to trade, if you're not looking for okra.

Send me a message if you're interested.
Joseph Lofthouse
steward

Posts: 5150
Location: Cache Valley, zone 4b, Irrigated, 9" rain in badlands.
1852
posted 4 years ago
I'm up for an okra seed exchange!!! I've een working for 4 growing seasons on locally-adapted (cool weather) okra. Most of the new varieties I trial fail to even reach knee height, and certainly don't make seeds, but sometimes they might contribute a bit of pollen to add diversity. 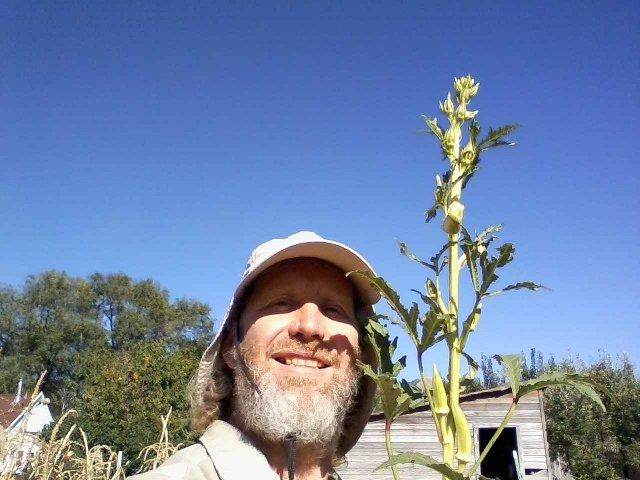 posted 4 years ago
Still looking to get some okra seed, if anyone is up for trading.
Deb Stephens
pollinator
Posts: 643
Location: SW Missouri, Zone 7a
127
I like...

posted 4 years ago
Hey Chip!
I have two kinds of okra -- only I think you would like the Hill Country Red best, and I have a ton of that you can have. I bought seeds for this one about 10 years ago and haven't had to buy since. It grows rain or shine, cold & wet, hot & dry or hot & humid (what we have the most of). I have never seen anything quite like it. It actually seems to thrive best when I ignore it the most, and it gets HUGE!!! I am putting up a couple of shots of it to show you. It keeps growing through the entire season and sometimes manages to top out around 15' tall with 3" stems at the bottom (More like a really fast-growing tree than an herbaceous perennial.) It is a beautiful plant with red trunk and stems, red parts in the leaves and red pods (hence the name) and is, if possible, too productive. (My freezer is full and I even have several jars of roasted seed that I intend to try making "coffee" from. Never tried that, but recently read somewhere that it is supposed to be a passable substitute.) The only real downside to this variety is that it tends to get fibrous kind of early, while the pods are less than 3 or 4" long -- making it tough or impossible to eat at that point. If you get it early enough though, it is a good solid okra that holds up well in soups and stir-fry -- not turning to goo like other so many of the more tender varieties seem to do. This is a tough plant with heavy-duty pods, so I grow another variety for fresh eating and pickling and save this for batter-frying, soups and ... maybe... for coffee substitute (if that works out). Since it is so large and so prolific, that last would be an excellent use, I think.

Anyway, take a look. The Red Hill variety is in the back/right with a spineless, long-pod variety to the left. The ladder in these shots is a 6' step ladder I had to use to pick it later on in the season when the pods got out of reach. (This shot was in September, I think. They are still going strong now in mid-November, zone 6b) If you want some seeds, send me a pm and I'll shoot some off to you. Don't need any okra in exchange (I have more than enough!) but you can toss in some squash or any other interesting seeds if you have them, in return. I'm always up for trying something new.

By the way, I can't seem to make these images appear here, but if you right-click and select "view image" it will take you to a window where you can see them. It's odd, but no matter what I try, they just won't load here like usual. If anyone has a suggestion, I would be glad to try it. It may be that these are stored in my Google photos (?)