Scott Stiller
pollinator
Posts: 793
Location: North Carolina zone 7
155
posted 5 years ago
When I moved to Kannapolis nc I thought, "WooHoo, I'm in gold country now!" Because hey, Reed's gold mine is only sixteen miles south of here. I moved to this location to start my permaculture farm and while I'm digging I may as well pan some. Two years and so far nothing. Anyone out there ever prospected? I'm kind of curious if I could just take shovels of dirt from my hugelculture diggings and pan those out. Helpful advice is appreciated. If you want to say, "Keep digging dumbass!" That's fine too.

posted 5 years ago
This I know something about. I grew up on the Yukon River gold fields, about 100 miles downriver from the Klondike strike near Dawson. Our first cabin was on the banks of the Discovery fork of American Creek, which was the site of one of the mini gold rushes to which Klondike miners flocked after all the good claims got tied down around Dawson. And my family spend three mining seasons working various claims along the 70-mile river in the early 1980s. I have picked and shoveled and panned and suction dredged rather a lot.

If you'll allow me a moment of pedantry, what you've got going on right now is technically a prospecting fail. You haven't failed at mining the gold, you've (so far) failed at finding the gold. Mining is the second step, first you have to find some pay dirt to mine in.

A few basics. Gold is very heavy. It's substantially heavier than rocks and it's oodles and oodles heavier than dirt. You've done some panning, so you know this; you get your dirt and gravel in the pan, you add water, you swirl, you shake, and then you scrape off all the light stuff and the heavy gold (along with some various kinds of black and brown particles that tend to be various kinds of iron and tin ores and oxides, or even uranium sand in some places) is left in the crack between the bottom and the side of the pan when the pan is held at the proper angle.

What you may not know is that the property of being heavy also affects where the gold is found in the landscape. Let's run through the life cycle of a gold nugget.

A long time ago during volcanic activity, molten gold came squeezing up out of the depths off the earth and hardened into metal, usually in the presence of quartz and other similar crystalline minerals. If you have any exposed rock on your land that is crystalline (not sedimentary like sandstone) look for the white streaks of quart and quartzy stuff, then crack out those bits of rock and look for gold nuggets. That's the first place to look.

But let's say erosion got there first, the rock got crumbled by natural processes, and the gold nuggets got pulled downhill from wherever they started by the action of gravity and running water. You can find them exposed on talus slopes below cliffs that they weathered out of, or in older more weathered terrain, you can find them in the talus gravel that's under the soil on the sloped parts of your land.

However, gold being heavy, it's usually not sitting on top of the gravel. As soils move, the gold settles toward bedrock. So the closer you can get to bedrock, the more likely you'll find gold in your dirt. If you want to prospect for this gold, the trick is to dig a series of pits or a trench (an excavator is awesome for this) along the contours of your slopes. Take a few spoonfuls of gravel from as deep as you can get (or from layers on bedrock) and pan them to see if you get color. Flakes are a lot more likely than nuggets, but enough flakes are just as good as the much more rare nuggets. Depending on the size and thickness of the flakes, you might want to see twenty or more in a pan for the "color" to be good enough to be considered "pay dirt", but even one or two large fat flakes might be enough to convince you to dig more pits nearby and do more prospecting.

If you have a stream on your land, that's even better, especially if it runs over exposed bedrock. Gold that makes it into a stream is carried downhill, and the stream is a natural concentrator (like a sluice box). The first thing I would do when prospecting any land is to walk the streams with a pan and a spoon (no shovel needed). I would spoon sediments into my pan that I found in cracks in the bedrock, I would pick up slabs of loose bedrock and spoon up the mud in the cracks, that sort of thing. If there's gold anywhere on your land "upstream" of you, you'll find at least some color that way. If you don't find color doing this, you're probably not in gold country.

Everything I have just written is a general rule of thumb, subject to a dozen exceptions and another dozen unvoiced complexities. Prospecting is a learned skill that when practiced by an expert, is hard to distinguish from dirty sweaty witchcraft. I was more than an amateur but I certainly never got expert at it.

As for your specific question, by all means yes: do try a pan from the deepest part of every hugel excavation. If you see any color at all, dig deeper and try again. If you don't find color in a few pans, you aren't in the right spot or you aren't deep enough.

I hope this helps!

P.S. Your gold panning technique matters a lot. Any fool can do it, but if he does it wrong (usually shaking too hard or scraping stuff out of the pan with too heavy a hand) he can miss color. Basically if you've ever watched somebody do it who knows what they are doing, you're probably fine; but if you're entirely self-taught, that could be why you aren't finding. In that case maybe check a few YouTube videos to confirm that you're doing it right.

Scott Stiller
pollinator
Posts: 793
Location: North Carolina zone 7
155
posted 5 years ago
That was incredible Dan! Thank you!
The fact is there are veins of Quartz all running the same direction on my farm. Every time it rains another few inches of the Quartz is exposed. I have three creeks. I've been told that there has been flakes found in one of them. I haven't panned this one because it's very overgrown and furthest from my house. The creek I spend my time in is directly behind my house and does have exposed bedrock in the low areas. I sincerely appreciate your time Dan. It just seems like since 28 pound nuggets were found sixteen miles from here I should find a little something here. 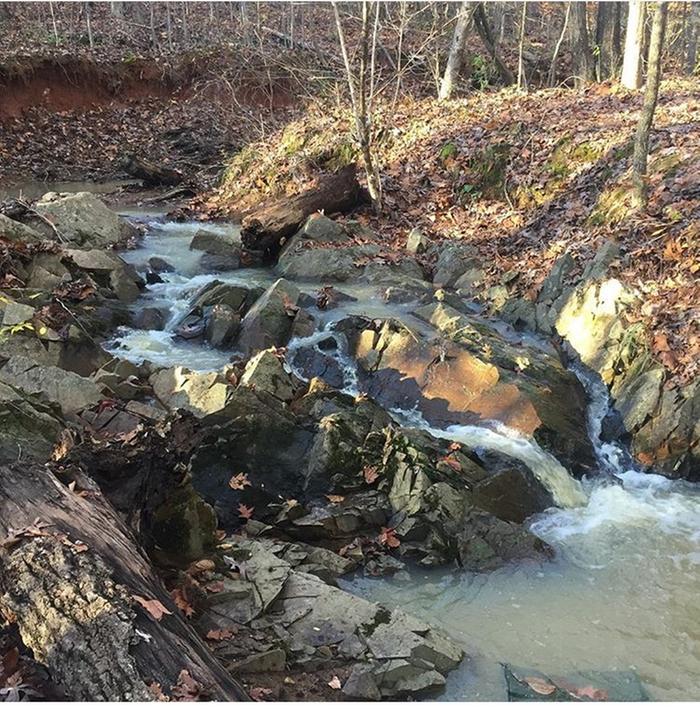 posted 5 years ago
I would agree! Your property sounds like a lot of fun for a prospector. In your shoes I would be paying a lot of attention to those seams of quartz and the areas of ground just downhill from them. The creeks are harder to play in if overgrown, but I would definitely check every low spot in the bedrock along them that I could reach.

There are also quite a few interesting (and, rarely, valuable) crystals that may be found in your quartz veins. So keep your eyes open for them too.

Oooh, I would too!

Scott Stiller
pollinator
Posts: 793
Location: North Carolina zone 7
155
posted 4 years ago
Been wanting to tell you what's going on but just now getting to do it. Lots, and lots of black sand to be had everywhere I can get a shovel of dirt. Been getting quite a bit of some super fine color too. Can't decide whether it is gold or mica. I added a pic of what I'm pretty sure is gold too. Thanks for all of your advice Dan.
image.jpeg 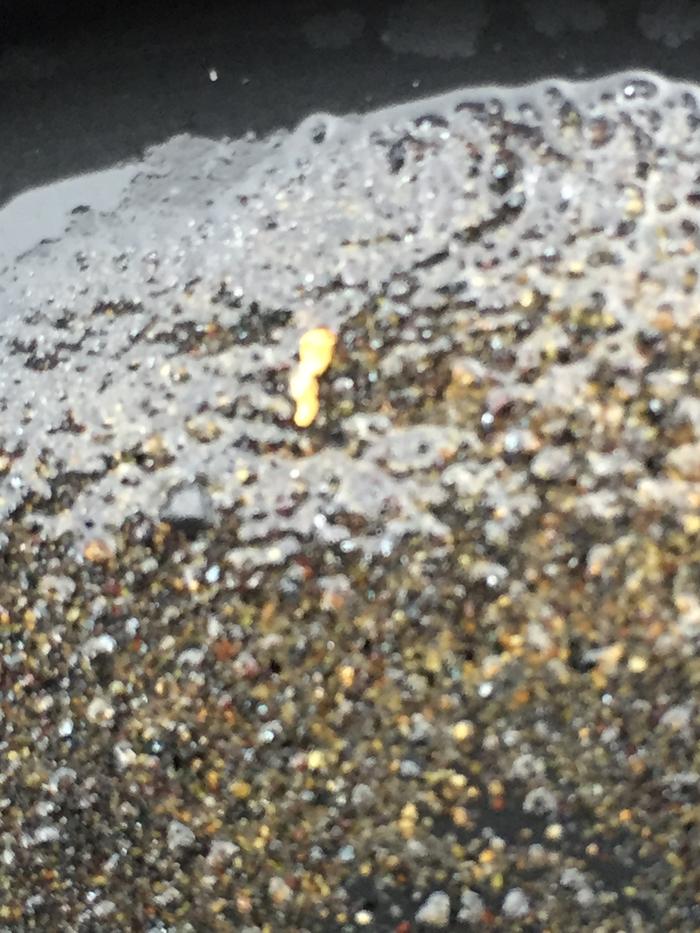 posted 4 years ago
Be nice if the focus was better, but that sure looks like gold to me! Mica is usually a more silvery color, and fools gold (iron pyrites) is typically a more regular/angular crystal.

Scott Stiller
pollinator
Posts: 793
Location: North Carolina zone 7
155
posted 4 years ago
Thanks Dan. I had to enlarge it on my phone so I could brag to everyone. The picture quality did suffer.
Sadly this is the only piece that I've found so far. 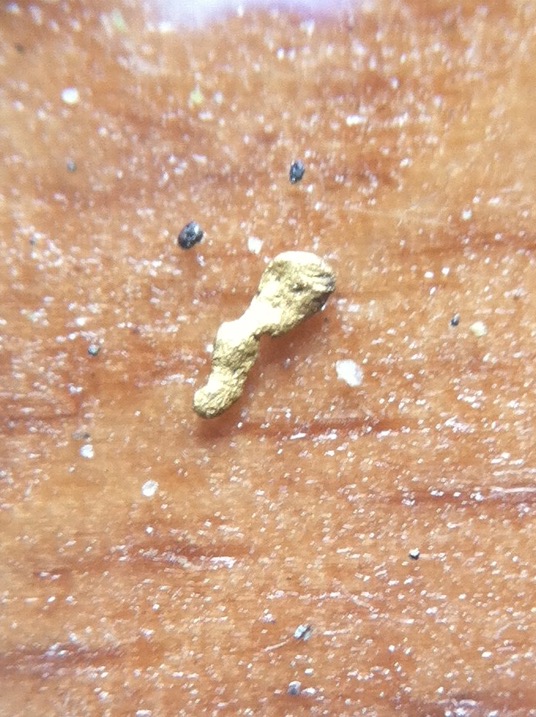