Ideas for Greenhouse in Nova Scotia...

I have recently taken over a project in Halifax, Nova Scotia... and may have bitten off slightly more than I can chew. I'm running a large passive solar greenhouse space and setting it up for micrograms production and using it as an inspiration for the community thats its located in. Examples of aquaponics, drip irrigation etc. Its all going well but there are a couple of things I needs some advice on.

Firstly, wintertime heating: Its passive solar but not bermed like an Earthship. It has a thick back wall but the south east facing front is not glass but some sort of semi transparent plastic. I need to raise the temperature a few degrees but we are not on the grid, we have a good solar system (12 large panels, inverted with 50/60V output) not sure of the total output yet (I have meeting with the solar guy this week hopefully). I'm looking for ideas how to heat this large space (32' x 20' x 12') using a solar rig. Or exceptional passive heating methods. Oh, I can't use fire or gas for insurance reasons.

Second problem, Ventilation: So the building was built pretty tight but I've started to notice some while holds on some of the plants, I think its due to stagnant air/ bad ventilation. The greenhouse wasn't designed with a vent system so again I need to rig something up or manage it somehow. The main problem is the cold winter in Nova Scotia, I obviously want to draw away humidity, circulate air around the space but not loose heat and, again, not too much power consumption because of the solar rig.

I've worked on a bunch of farms and agricultural projects but not a large scale greenhouse and, being that its just me, I could really use some help!!

Any idea would be great, I've reached bit of a stalemate...

Many, many thanks guys, 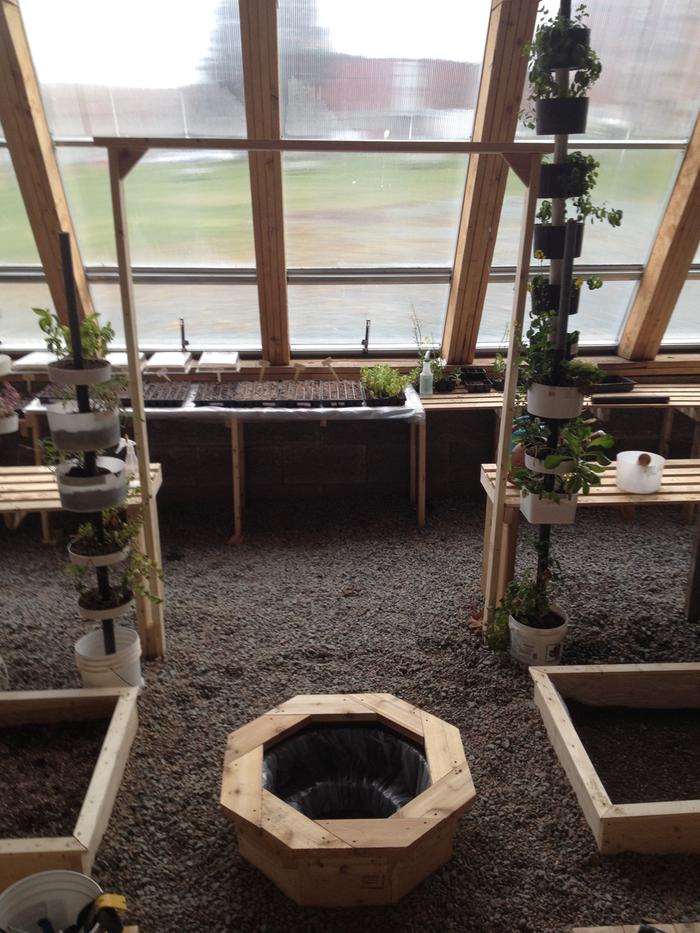 posted 5 years ago
Peter,
Is there any way to cut out a few panels at the peak of the house and build "hatches" that you could open in the summer to let out air? Then an opening along the ground , or even underground piping, to allow air to enter and circulate?

In winter , if you can find some used cement curing blankets, you might be able to build a system that would allow you to lower the blankets at night and raise them during sunny days.

The summer we're good! The top has hatches as does the bottom (about 4' off the greenhouse floor).

I'll look into the blanket idea, sounds interesting! I've considered the black drums, it might be an option, I have to keep aesthetics in mind though (which is a pain) as the space serves as a certain media tool... barrels on wheels might work though...

I guess I'll see today, first snow of the season in Halifax today!

posted 5 years ago
you might want to look into using mulch/compost as a heat source. sort of similar to hotbeds, usually made with (dry) straw and (fresh) manure/ (fresh) compost...instead of using it as the growing medium though...i am suggesting using it as a heat source in a pile somewhere inside.
Nix Gray
Posts: 2
posted 4 years ago
Hello!

I am actually in Halifax, NS. Just an interested novice, so this isn't tested advice but (if they have potential for your application) perhaps a more experienced member can assist with the details.

Can you create a second set of plastic transparent windows to create an air pocket between? I have read 3/4" minimum spacing and too much negates the effort. That may decrease your heat loss.

DIY Solar heaters? I'm seen them around the city more often so they must work to some degree. The typical beer can panels. It may not solve your night time winter issues but perhaps in conjunction with the window blankets it may give you some appreciable difference. You may even be able to heat water barrels via solar water heater, and the barrels then give off heat through the night. Seems like a few small scale, inexpensive experiments would give you enough evidence to test it on the greenhouse or not without any serious modifications.

If you can increase your heat will you increase your air circulation with the natural currents of air rising and falling? I pulled this from another site in regards to ventilation: "...greenhouses that are built from more rigid materials need to follow a few guidelines to ensure proper ventilation. The most important aspect of natural ventilation for these greenhouses is the size of the ridge (roof) vents and sidewall vents. It is recommended that the total combined ridge vent area should be equivalent to the total combined area of the sidewall vents and each should equal approximately 20% of the floor area. For example: a 10 ft x 30 ft greenhouse would have a floor area of 300 square feet; 20% of 300 is 60, so a 10 ft x 30 ft greenhouse should have a total area of 60 square feet in ridge vents and 60 square feet in sidewall vents to be properly ventilated naturally. (http://gardenandgreenhouse.net)

And something like this example may be of interest:


Best of luck! and interested to see how you make out!