D Nikolls
pollinator
Posts: 1433
Location: Victoria BC
190
posted 4 years ago
I screwed together most of the parts of a roundwood wall today. I found both GRK 'RSS' and Fastenmaster 'Timberlok' screws at home depot, and bought some of each to see how they compared for this use.

Performance was noticeably different, so I thought I'd share the results.

I preferred the socket drive on the Timberloks, mostly because I don't ever need a star drive for anything else. If you get the retail packaged screws, both brands include a driver bit.
OTOH, I preferred the larger head on the RSS; the Timberloks strike me as too easy to drive overly far through the wood, which leaves me worried about pull-through. After a test drive, I used washers with the timberloks, but not the RSS.

Timberloks were easier to drive, though a bit harder to start. My cordless impact driver running an 18v 2ah battery could handle them fine unless I hit a knot, and it was easy to do with one hand aside from starting them. The relatively short amount of thread made them well suited for pulling the components together; in some cases the RSS screws could not do so because of the threading present in the beam.

However, at some spots where I wanted to pull two pieces tight by screwing through side-grain into end-grain, 8" timberloks would pull out or strip the end grain portion.

Switching to an 8" RSS screw for the same task solved the issue in each case. I had to use a cordless drill for the RSS screws; with a 4-ah battery it could just barely handle them, and it was near the limits of a one-handed operation for me. It wouldn't reliably drive these with a 2ah battery, not able to draw enough juice.


I'll add a picture when I remember to bring the camera up.

I've seen timberloks used on several projects, but never RSS screws before. I ended up pleased to have both, and figure I'll continue using a mix when I need this sort of fastener.


I'm hoping to track down some SPAX structural screws to see how those compare, and some suitable wood for pegs for future projects.

What sort of fasteners do you prefer?
Rob Bouchard
Posts: 42
Location: BC, Canada
posted 4 years ago
I've been using 8" fastenmaster headlok screws to put sip panels over my post and beam house, they work amazing. I ran out and had to get some similar grk screws and was quite disappointed with the pulling strength of them. The fastenmaster would straighten out a 2x6 on end where the grk would snug it, but not pull it tight against my timbers. Same deal with knots though... Stay away from them!
D Nikolls
pollinator
Posts: 1433
Location: Victoria BC
190
posted 4 years ago
Huh, interesting, exactly opposite from my experience! To be fair, the RSS' were larger diameter, so perhaps in a true apples to apples test the fastenmaster design is superior... this possibility would be more compelling if they made larger diameter screws!

Here is a pic for anyone that has no idea what we're talking about.

Headlok on top, grk below. This is a 7" grk in the picture.

It adds up fast at these prices; combining 8" timberlok with 6" RSS was good for most connections, and cheaper, and the 8" RSS bailed me out on the hard ones.

My doug fir was still standing a month ago, and has been rained on most of the time since, a substantial difference from yours!

Where are you getting your Timberloks?

Here's a comparison pic of the ones I used.
RSS-vs-Timberlok.gif 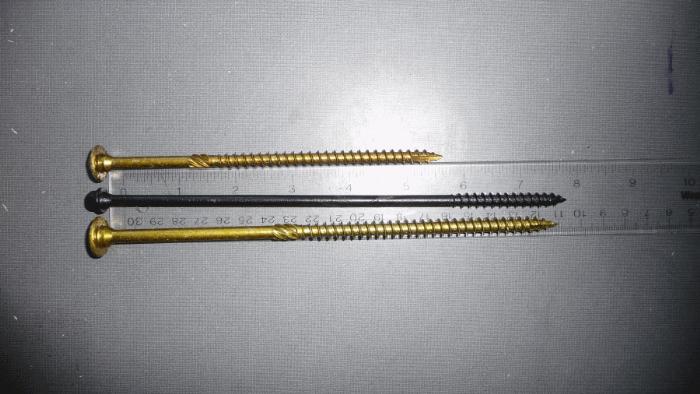 Rob Bouchard
Posts: 42
Location: BC, Canada
posted 4 years ago
I got the headlok's from my sip supplier, I think they were even less if you bought a box of 250 around $. 64.

R Scott
pollinator
Posts: 3539
Location: Kansas Zone 6a
63
posted 4 years ago
I love the rss screws. I have never snapped one of the big rss ones, while I have broken several timberlocks. Prices are closer here (timberlocks are way more expensive here).

The threads go way further up on the rss, which can be good or bad depending on the application. Much better for bolting a 2x to a post, not so good for bolting to timbers together.

kyle yoder
Posts: 1
Location: NE Missouri
posted 4 years ago
Really pleased to see this thread. Have been looking for a comparison on the three brands of structural screws and came up empty until I found this. Would love to hear more of your experiences.

I do a lot of wonky joinery with a hodge podge of wood types. Most of it is hardwood. Some of it is especially hard wood -- black locust and occasionally osage ("hedge"). Because of how hard the wood is, I almost always have to pre-drill first, which I realize takes some of the benefit out of these fasteners but it's still worth it in my opinion.

So far, I've primarily used Spax brand, because it is what I can buy in 50 pc boxes at Menard's -- the local big supply store. I have been overall pleased with them. They look closest to the GRK (with the thread further up the shaft), although I've never used the GRK so can't compare it. I have some headlok (same brand as timberlok, think the head is just smaller) screws that I haven't tried out yet, will report on details as I learn more.

I live at Dancing Rabbit Ecovillage. We're trying to figure out earth friendly living in a practical way. Come visit us sometime.

D Nikolls
pollinator
Posts: 1433
Location: Victoria BC
190
posted 4 years ago
I've used these for a few more odd tasks since first posting. My main complaint is that they are expensive, and too damned useful to do without now that I'm used to them!

I still find I prefer the RSS performance/strength wise, but the little driver bits they provide have gotten old fast. The timberlok packs not only include a better driver bit (locking 1/4" type, vs the small one the GRK folks provide which is meant for a bit-holder... and then the bit-holder breaks), but it's very easy to use a socket set to tighten the hex-headed Timberloks down, if your driver isn't up to it.

I haven't yet had to resort to a socket set or corded drill when installing these, however I had to use a breaker bar/socket when removing some after a few weeks, as the timbers shrank around them!

I am finding that these screws are really nice for temporary applications, as they are not only much stronger while holding things up, they come back out without breaking, where other screws often snap.

Rob Bouchard
Posts: 42
Location: BC, Canada
posted 4 years ago
Lol I have to agree! I've been using them for all sorts of things and that extra length sure comes in handy for fastening jobs where nothing else would work.