Here's (yet another) rabbit hutch design

posted 4 years ago
Yup. I designed and built it myself. Kinda HUGE. Not real practical for meat rabbits or a TON of rabbits, but very nice for big rabbits or pampered pets.

It also works great as a chick brooder. Yup, I've tried it. Unfortunately lost most of those poor little peepers to coccidiosis... lesson to future self: don't let the rooster poop on the chicks. It was very sad, a terrible mistake on my part that I will never repeat. I did cry.

But it DOES work great as a chick brooder, rabbit hutch, probably for other small animals as well. It's big enough to hold a large rabbit, even though I raise mini rexes. Yes, I pamper my animals; it's more expensive, but they're my babies. Oh, and I also have a rabbit playpen, complete with a cozy little treehouse (a little high for most rabbits, but some of them love it). I've included that tutorial as well.

Even though I know there are tons of rabbit hutch plans out there already, I wanted to share this. It's on instructables, and shared many times on pinterest. I'm not such a skilled (or patient) woodworker, so some of the hutches are lopsided and messy. I know I could improve the ones I currently have, but I don't really want to spend my time that way. But pinterest people seem to like it, so I hope it's good 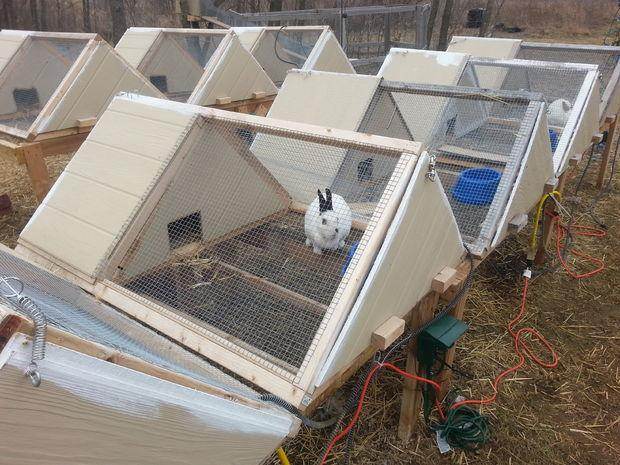 It's nice for rabbits because the middle (high) part of the cage gives them room to stand up, but they can fit into the corners if they want to lay down. My rabbits will squeeze into the corners on hot days next to a frozen water bottle and lay there, quite cozy. In the winter, the sloped sides are nice because snow piles up, creating natural (and effective) insulation. Straw is placed into the interior area, and the rabbits burrow into it and create little nests. The straw usually piles up quite nicely on the other side of the door, keeping the wind off the sleeping rabbits. I've never had a rabbit get frostbite with these cages, and in the summer, they stay cool enough (most days) to be comfortable.

There are two seasonal diversions that can ease the bite of any winter. One is the January thaw. The other is the seed catalogs. ~Hal Borland

posted 3 years ago
It looks great! About how much did it cost per hutch do you think?