Woodgas build in the Yukon

I've been reading these forums for awhile know. I finally signed up and decided to contribute my studies and findings that I've been doing on my offgrid homestead in Yukon Canada. One of my projects among others here on the homestead is a woodgas generator.

After seeing all the wood scraps coming off my one man sawmill operation. I thought to myself there must be a better way to utilize the wood slabs and scraps.

A search on the internet found woodgas units. One thing to another I'm on Ben Petersons web site.

A couple years go by and finally I'm starting to build my woodgas unit. I've got all my parts together for the woodgas generator. I'll work on the carborator later.

On this web forum I'll try and document how my build goes. With life such as it is, family, business, and such. I'll try my best to keep it updated so others can learn from my build in hope they to someday can make there own energy.

Doesn't look like much know but already got just about 10 hours into the build.

Phase 1 is the reactor fabrication! All man sounds cool to say I'm building a reactor.

Sit back please follow my build, chim in if you have any recommendations or ?'s this is a chance for all of us to learn.

I got all the parts cut at a machine shop. Well worth the $. The head guy said Bens cad drawing were perfect and some of the best drawings that he had seen done. So my recommendation is to buy the steel and pay to have the parts cut saves a lot of work and more accurate.

I'm waiting for the jet nozzles to be machined, and at the moment I just finished the reactor assembly. I'm not the best at welding but by the end of the project I'm sure I will be. The book so far has been awesome to follow and very easy to move along. 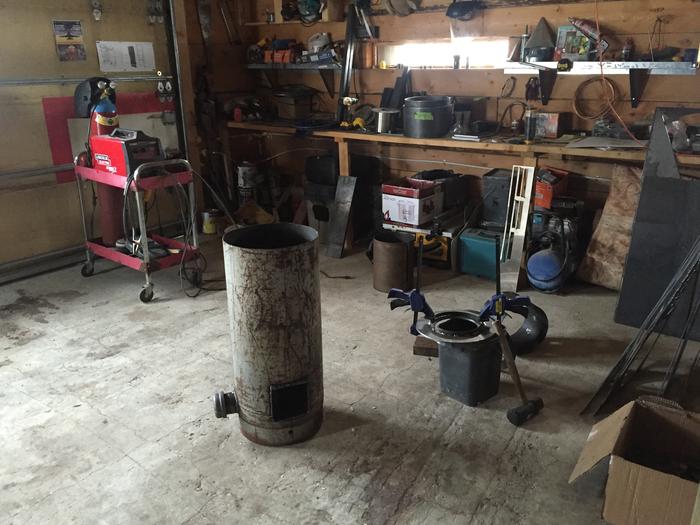 posted 4 years ago
Good stuff, keep it coming!
Byron Gagne
pollinator
Posts: 135
22
posted 4 years ago
I guess I should list some of the struggles I ran into during this build so far. All of them or geographic and personal related. Nothing really to do with Bens Plan.

The biggest hurdle is finding material and finding it cheap in the north.

I had the choke mantle built out of stainless and welded together. It cost over $150 !!! But I'm hoping this part lasts longer. This part is changeable if I decide to run a bigger engine someday.

The other expensive part could have been the burn grate. As its stainless also. I found a guy who made up 100 burn grates and sold 2 to me for $20 us each.
molonlabe63@gmail.com is the contact of the guyselling the grates. I don't know if still has any left.

The jets were also a struggle. No machine shop in the Yukon would touch them for under $65 each

Finally I found a shop in Alberta who's going to machine them for $18 each. I ordered 20. 10 half drilled out to use as plugs. 10 drilled out fully. If I would have ordered 50 they would have been $13 each. Possibly in the future I would order the volume on another build and sell them via woodgas forums and such helping others with there build if there's the interest? Just like the fella did with the grates!

While we're on the topic of air jets. I decided to put ten in the gasifier. Bens plans call for either ten or eight air jets lay out. Here's my reasoning, and to the best of my understanding and knowledge. Again please correct me if I'm wrong as then I can learn. Before you build you have to decide what your doing with the gasifier. My goal is to run between a 6500 - 10,000 watt generator. At the moment I got a 6500 but would like to get a 10,000 watt ideally.

Why so big? Two reasons. First one. If I'm going to go through all that effort to build a gasifier, and process bio mass Im hoping to do some work with the unit. As opposed to say a 2000 kWh genset. My ultimate goal is to run my shop and charge batteries with the generator. 10,000 genset will do this and easily run all my tools, welder, planers, drill press, table saws and so on.
If I'm not working in my shop and I need to charge my batteries I will just run my little 2000.

Reason number two, all that I've read on gasifiers is that the bigger the engine the better the burn is and less chance of tar in the engine. The bigger engine has more draw through the gasifier opposed to smaller engine, making more complete "thermal distillation of the wood" in the burn chamber. That's what Ben refers to what's happening over 2000f in the burn chamber.

Back to my 10 jet reason. 5 plugged and 5 unplugged.
Bens plans call for 5 -6 jets for a 1 litre sized engine. I could play with the jet lay out maybe 4 maybe 6 will work best. But having the option to change numbers and direct the velocity around I can optimize my system. Possibly I might find a 12000 watt genset or a 8000 watt genset for a good price. Then I could optimize the gasifier by changing jet lay out and the size of the choke mantle. Allowing for wiggle room.

image.jpg
image.jpg
Byron Gagne
pollinator
Posts: 135
22
posted 4 years ago
Got the air jacket almost complete. A lot of welding followed by a lot of grinding. Still need to tack the fittings on as per the build plans. Anxiously waiting for the arrival of the stainless jets freshly out of the machine shop in route Whitehorse bus depot as I write this!!!

Tomorrow hopefully I can clue some more steel together!
image.jpeg
Byron Gagne
pollinator
Posts: 135
22
posted 4 years ago
Had a good Saturday go at my project. Still waiting for the jets to arrive, should be here Monday. I got the rest of the parts prepped, including the lid. Upon arrival of the jets it's time for some serious gas tight welds!
image.jpeg
image.jpeg
Byron Gagne
pollinator
Posts: 135
22
posted 4 years ago
They arrived my little beuties! The Stainless jets or hot off the press. 10 drilled out and 10 as plugs. Know I can swap jets and plugs to I find a great lay out.
I decided to hire out the gas tight welds to assemble the burn chamber and hopper. The it's done right.
I had to hire out other areas in the build. Strainless welding in the grate assembly and while it was in the shop I had them drill it out also!

This has saved a lot of time on my end! Even if it costs $. I'm not excactly a outfitted machine shop. So I'm picking my battles.

image.jpeg
Byron Gagne
pollinator
Posts: 135
22
posted 4 years ago
Ok on my last post I was going to farm out the gas tight welds to the local machine shop.
This means I have to load up haul to town and drop off my gasifier. Wait..... Pick up and return to my shop unload and build.
After getting a estimate $$$$ I decided to stick with doing it myself and finding a better welder. After much research I came across the ready welder. It is a good little unit with lots of heat. Powering it on two deep cycle batteries it does all that I need. Upon its arrival it went ahead and welded the couplings to screw the jets into!
I'm not the best welder but I feel confident with one pass of the ready welder I was able to get the couplings gas tight! 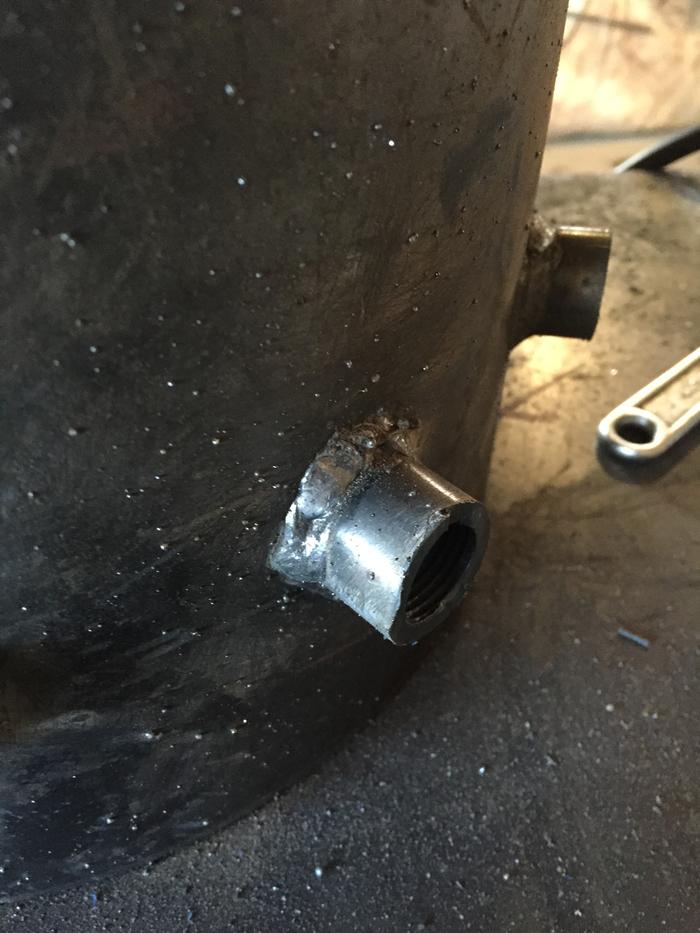 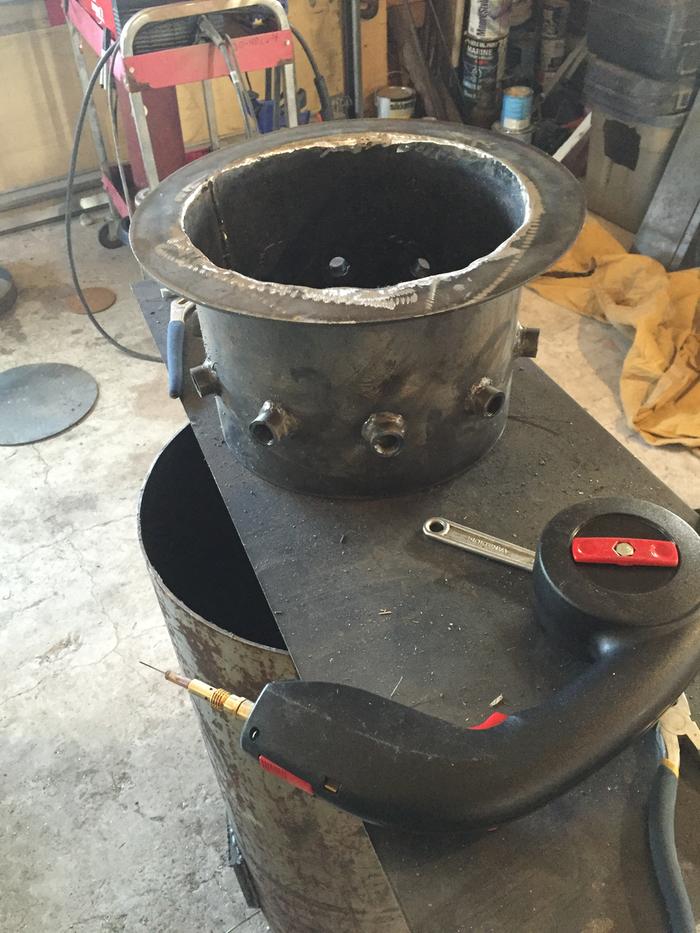 I'm using a old blacksmith drill press for drilling out my holes. Installed a quick chuck from a cordless drill from the dump!!! Makes easy but changes
image.jpeg
image.jpeg
image.jpeg
Byron Gagne
pollinator
Posts: 135
22
posted 4 years ago
I had to tap out 5/16 bolt holes for the lid install. Because all my parts were cut on a cnc machine the holes were there but very rough and I couldn't tap them. So I filled them with weld, drilled and tapped out the threads turn out out great!

Oops I installed the latch backwards🙃 In the next pic!
Nothing the zip cut couldn't handle😊 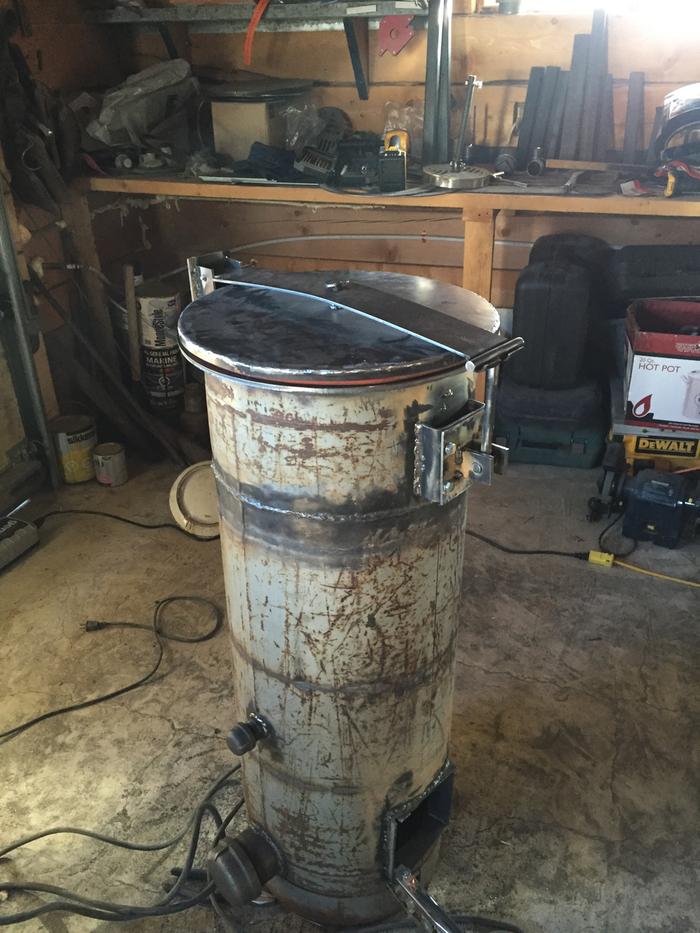 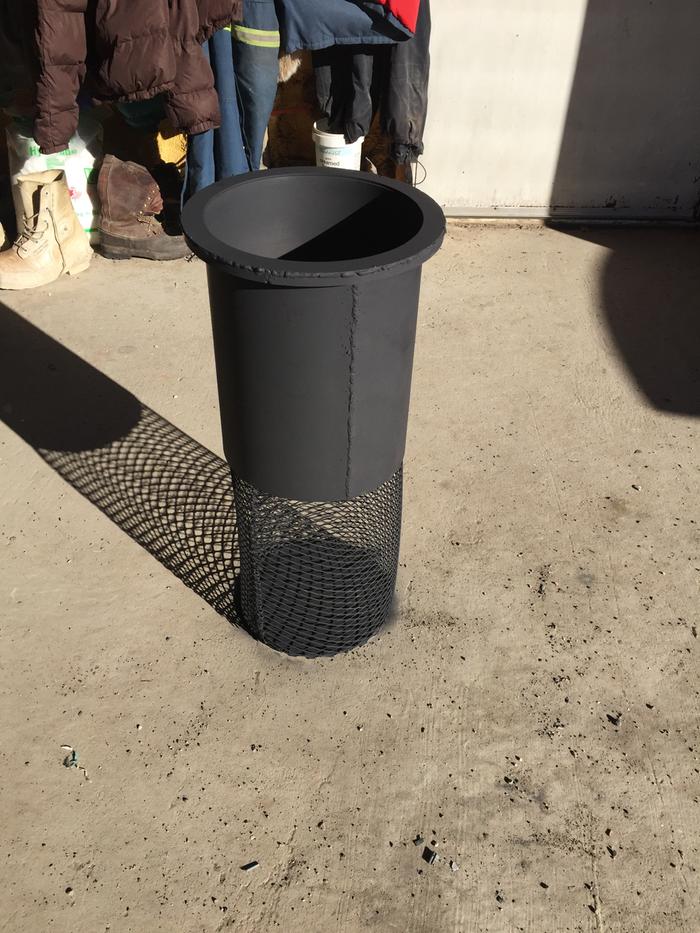 Byron Gagne
pollinator
Posts: 135
22
posted 4 years ago
Had a great day on my build today. Got a lot of the painting done. I installed the blower. Hooked up the wiring, batteries and relay for the blower and grate. And yes they worked the first time👍. Still waiting on a couple of parts to be built they will ready early next week.
Still to go
Cooler
Filter lid
Filter inner ring
Then I'm making gas! 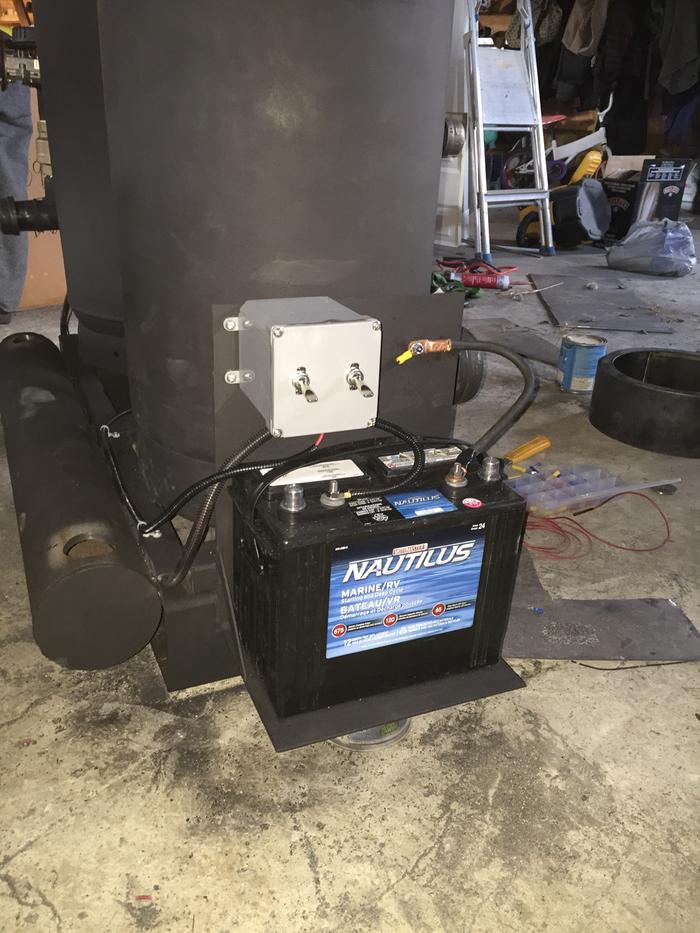 I made gas!!! It flared to the same intensity as a tiger torch when I light it. Very clean very little yellow in the flame.

The down fall is to much moisture. Not enough cooling in the condenser. I need to lengthen the cooler a lot more. I had this feeling when I had assembled the condenser but it was what I had to work with.

Back to the drawing board

Know for a cooler modification.  So far I'm very happy and have about 40 hours runtime in my unit.
Next improvement is dumping the heat somewhere useful!
I'm thinking thermal grow bench in the greenhouse!