Byron Gagne
pollinator
Posts: 136
24
3
posted 5 years ago
Here's a great review of the ready welder I purchased to build my woodgas unit. He explains and I agree with his finding 100%

I'm very happy with the unit and on a offgrid farm, repair and project situation it's perfect set up.

My routine would be work in silent for 3-5 hours then start my little 2000 watt fuel sipping genset to recharge to batteries at the end of the day for a couple of hours.
One could rig up a solar trickle charge on the unit and I feel the unit would keep up with general repairs on the farm it would be all about battery management then.

I love this little unit I highly recommend it if anybody is looking for a welder for the farm.

Next project is setting up the batteries in my truck to be charged off the Altinator while I drive around. I would have to manually disconnect and set up the batteries to charge in 12 volt mode then when needed it would switch to 24 volt for most welding applications. I have already built a extension cables so I can reach from the truck into the workshop to weld.

Please feel free to ask and ? About this welder I have run a few pounds of wire through mine and love it.

I'm not a welde by any means but found this unit very easy to use and I feel is perfect for the odd build project and general repairs around the homestead.

Things to note about this welder
It can weld up to 3/4 plate with 36 volts
Aluminum and stainless is possible
Weighs 17lbs not including the batteries
Any 2 car battery can be used for a quick repair in the field. But deep cycle is best for big jobs and more designed for longer duty.

For the price, portability and versitilty it's a awesome little machine 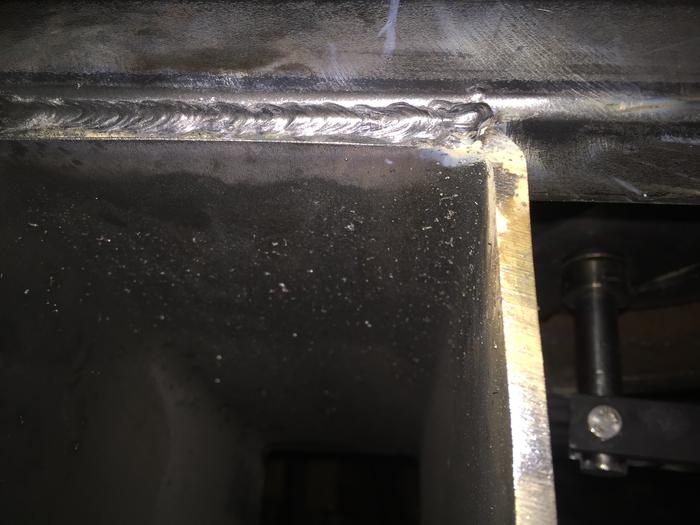 Byron Gagne
pollinator
Posts: 136
24
3
posted 5 years ago
Here's a pic of me using the stitch weld technique I found best for 1/8 plate otherwise the unit is to hot💥

Stitch welding works best on most tacks as per the ready welders recommendations, here's me completing the final weld on the gasifier
image.jpeg 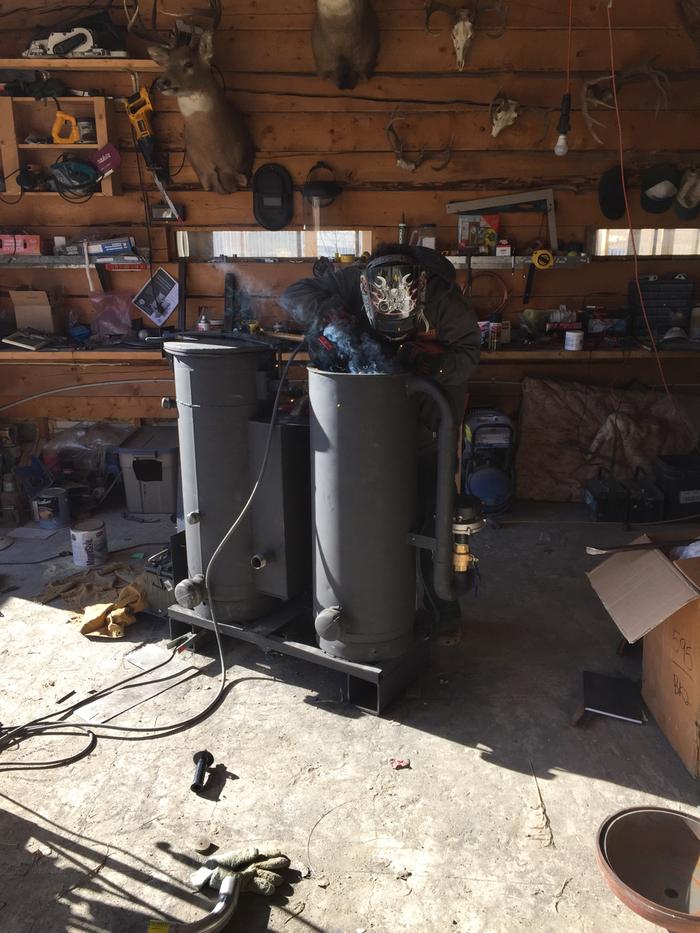 posted 5 years ago
I find the concept and their product info (which you linked to) intriguing. Not too bad of a bead that you illustrated. Show more of your work with the unit, if you get the chance.

I have some reservation about accepting that it's a suitable unit for material 3/4-inch thick. Though I suppose with multiple passes??...

I know that mild steel that thick would present a degree of challenge for me using my Lincoln 180 - a 240v line-current powered MIG rig. I'm sure I'd make multiple passes with my rig, just to ensure the weld was strong enough.

Even if the bat-powered off-grid unit can handle 3/8-inch steel, I'd be impressed.

Byron Gagne
pollinator
Posts: 136
24
3
posted 5 years ago
I've only welded 1/8 and 1/4, and thinner material at this point. I would be very confident tackling 3/8 with one pass!!! Based on my experiance on the unit already. It rolls a good pool of metals making for a superb weld.

The key with the unit is most welders turn ac to DC and welding is best with the purest DC one can get. One looses a lot even in high end welders. Since this is direct DC, it can be as high as 300 amps at 36 volts, = 3 batteries. Then 3/4 plate is possible.

My experiance with the welder at 1/4 which it just smoked through at 24 volt would have to problem with 3/8 plate. I wouldn't think nothing of it.

I had a friend over he is a real good welder owns a $4000 wire feed. He picked it up got the hang of it and couldn't beleave that I only spent $750. He looked at me and said that this all guy really would need!

It's not a do all solve all machine. I do feel it's great for off grid work shops and farms. It's all is use know!!! It's not designed for factory of pipelining work.

One benefit for me know in my offgrid workshop I won't bother wiring in a circuit for another welder. Saving me the cost of install plus a bigger genset to run the shop that I originally planned to run my $3000-4000 dream welder I wanted to buy. Another saving nobody thinks of.

Sorry if it sounds like a sales pitch but I would only share what I beleave in and feel works, tried tested and
true. Heck I built a complete working wood gasifier with the unit!

I think this 4x4 built purpose repair welder can be adapted to offgrid workshops and work for most situations on most homesteads and even repair the aluminum boat, or build a stainless grate for the woodstove!

It's worth taking a look at! I thought the same, is it as good as they say? I've been impressed. Once I took the time to run it and get the hang of it. Which was a short learning curve, I was pulling off good welds. If one can weld or has the skill to learn to weld I feel they could operate this unit.

Here's what I built today

posted 5 years ago
Thanks for posting more pics, Byron.

D Nikolls
pollinator
Posts: 1699
Location: Victoria BC
261
posted 5 years ago
Byron, thanks for reminding me this exists; I'd seen it years ago, but am welder shopping now and had forgotten all about it... Definitely a much cheaper way to get started than the diesel powered units I've been looking at so far!


Seems to me, this unit is basically a DC-powered spool-gun with a bunch of accessories:
The case
10ft welding cable and gas hose
Battery clamps
Ground clamp
Battery interconnect cable
Optional high-amperage switch
Optional DC PSU for the spool-gun circuitry/motor

Almost everything on this list, I don't really want/need... The cables are a bit shorter than I'd like, and I'd probably use thicker ones. The clamps are not to my taste, I'd rather use lugs or maybe lugs plus Anderson connectors. I don't like the idea of the cold-switch, I'd rather try and rig up some high-power relays to have a trigger that actually works... IDGAF about the case, it can go in an ammo can or toolbox..


So, the question is, how good is the spoolgun?

(vs just buying some other (cheaper!) spoolgun and hacking things together like this: http://www.offroadfabnet.com/forums/showthread.php?t=10268 )

Byron Gagne
pollinator
Posts: 136
24
3
posted 5 years ago
How good is it? I love it, I actually sold my old wire feed Lincoln!

As For you concerns regarding 10 ft of leads, and using clamps.
I built my extension I think I reach just about 25 ft know. One could build as long as needed. I think the manufacture sells a 100ft extension.

The wires or all terminated with battery lugs. You bolt the clamp on if you want clamps or directly bolt the lug to the battery terminal. There's benefits to both. Clamps or great for quickly hooking up a battery bank the doing a repair weld. Directly through the lugs is a better connection and more of permanent set up.

posted 4 years ago
I thought I'd bump this thread.  Byron, given that by now you'd have even more experience with the off-grid welding rig, just wondering how you feel about it. Do you see it as the unit that does the job for you in nearly all situations?

You mentioned you sold your Lincoln wirefeed rig.  Any regrets about that?

D Nikolls
pollinator
Posts: 1699
Location: Victoria BC
261
posted 4 years ago
I caved and bought one; I had an immediate need to built a spare tire mount, and found a good deal that convinced me not to piece one together.


I have ZERO experience welding prior to this, and LOVE having the capability. I run it off the 2x 12V 'house' batteries in my van, switched over to series and disconnected from the van; they've been fine.

My bitching about the cold switch was misplaced; it IS just a high power relay wired to the trigger, I didn't realize this from their description.

I do have some misgivings though when it comes to build quality. It seems generally cheaply and rather crudely built; the provided wiring is all cheap untinned stuff, and the lugs are hammer-crimped. You know, the shitty sort intended for use in a home shop by someone who can't be arsed to buy a $50 hydraulic crimper...

The plastic is cheesy, and doesn't give a solid impression. The wire feed adjustment dial is poorly placed and constantly getting bumped by accident.

The branding makes a huge deal of it being a American Made Product... but they used cheap chinese knockoff components everywhere that I can identify them. The Anderson connectors are not genuine, but unbranded copies. Hypocritical IMO.

The fairly short warranty is void if you don't send in your paperwork; not uncommon, but still lame.


So, in short, I love it... but I feel like it should be possible for someone to build a better quality version of the same thing, for the price. Or, that someone could build this quality for rather less money.


There is also the Broco GOWELD, for around twice the money; it's a fancier unit with an onboard computer handling speed control.

Byron Gagne
pollinator
Posts: 136
24
3
posted 4 years ago
Hi Joel,  thanks for checking in.  Yes I have done a lot more welding with the unit.  Including completing Ben Peterson's Woodgas build.  I have no regrets on selling my Lincoln 140 mig,  As I quickly found the ready welder way more versatile and can weld heavier plate no problem welding even weld 1/4 all day.  I've built wood stoves, general repairs around the homestead and have had no problem with the unit.

I did have to find the best wire to feed the unit.  Tried different brands then found Lincoln .35 flux core the easiest to use for most jobs.  Plus it was the cheapest were I live.

Once I had the flux core dialled in and played around abit I found the unit very easy use.  It's very hot and stitch welding is recommended.  As also recommended in the manual.  This Takes awhile to get used to this but know it's almost natural for me to run a nice bead and stitch weld.

I just started another project today.  Building a lift for my shop.  Will be welding thick I beam material and such.  I'll be documenting my build and posting on my YouTube channel and may even throw in a better review of the ready welder.

posted 4 years ago
Thanks for the reply, Byron.  Good to hear your experience.  Glad to learn that it's working well for you.


Byron Gagne wrote:I just started another project today.  Building a lift for my shop.  Will be welding thick I beam material and such.  I'll be documenting my build and posting on my YouTube channel and may even throw in a better review of the ready welder.


If you feel like it,  please add something to this thread...
https://permies.com/t/62659/homestead-workshop-shed-situation