We decided a long time ago that if we had to buy another mower it would be electric not another smelly gas engine.

We brought it home yesterday and mowed the side lot in less than an hour.

A lot of it was thick and we noticed the motor shifting gears for that. I assume that used up more battery as it needed charging after about a half hour of mowing. The charge only takes 30 minutes, though so with two batteries there wasn't much of a pause in the mowing.
I think next time we can finish on one battery as it won't be so tall.

It is heavy (we wanted a metal deck, not plastic) but not noticeable when pushing to mow and so wonderful to mow without breathing gas fumes

and we can talk to each other while it's running...still an engine sound but not nearly as loud as a gas engine.

Nothing left to mow right now though....we used the mulching option because a lot of mouse ear chickweed is going to seed and there are some places that look like they could use the mulch but much of the 'yard' was heavy clover and a few different grasses.

The 'high' setting seems to be almost four inches. I plan to mow again with the bagger after it grows an inch or two. 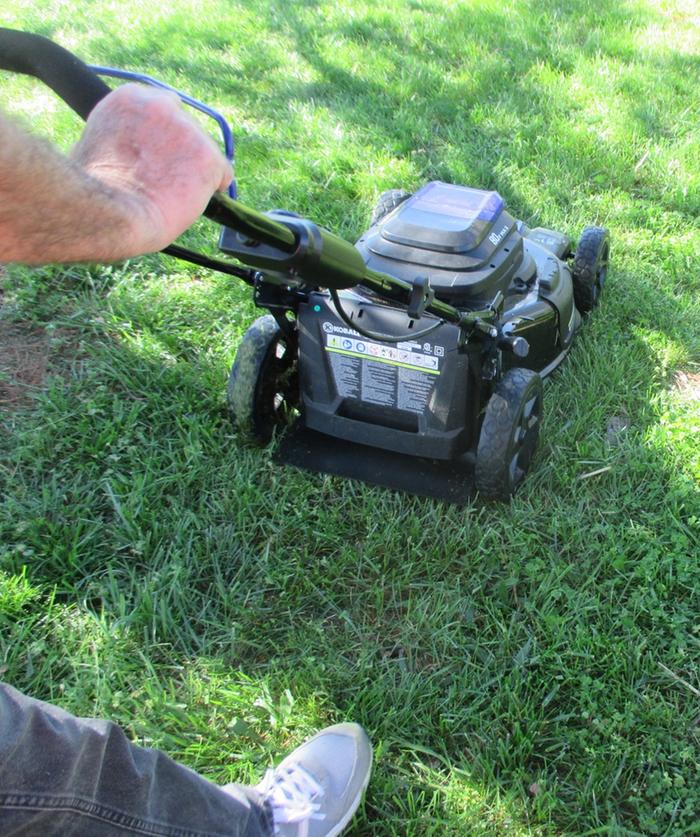 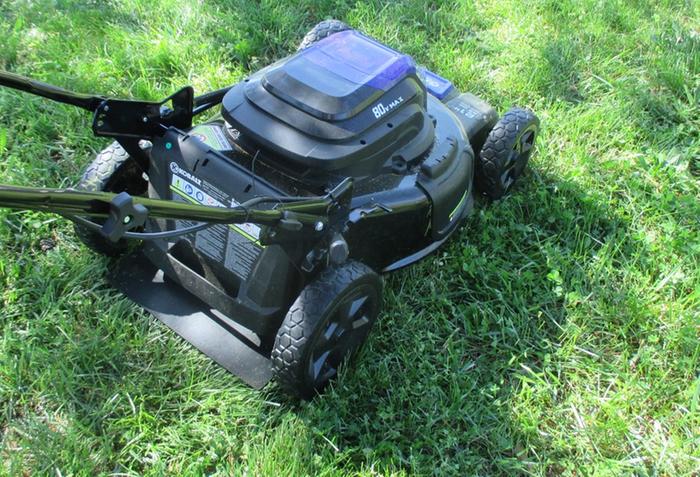 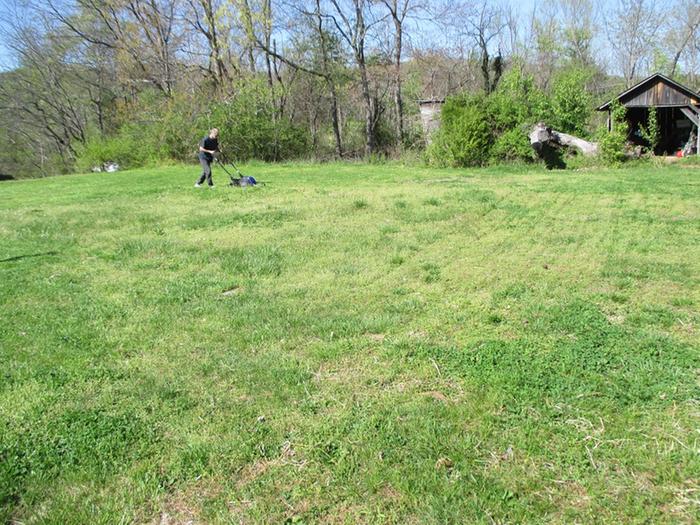 Judith Browning
Posts: 7422
Location: Ozarks zone 7 alluvial,black,deep clay/loam with few rocks, wonderful creek bottom!
1315
posted 3 years ago
We're testing out the bagger on the grass and clover around the edges of the chicken pasture and the garden....wonderful stuff. We've been without a bagger for awhile and miss it as mulch in the garden beds.....the battery is still hanging in there after eight or ten baggers full....the clover is especially thick and nice.
I don't have anything bad to say about this mower except that it's not a sheep 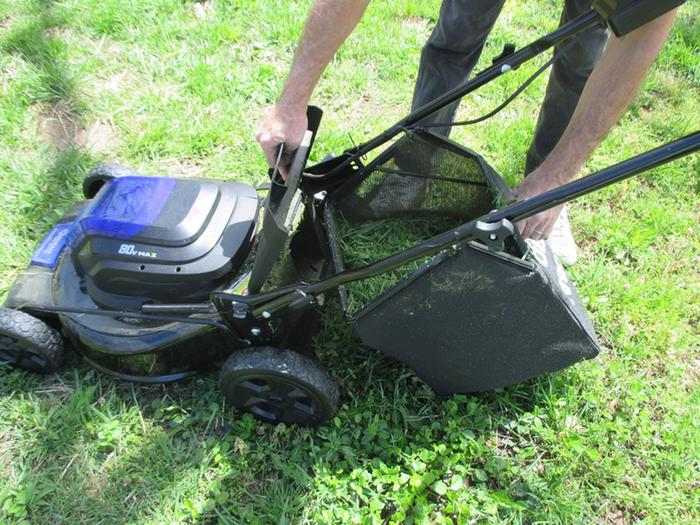 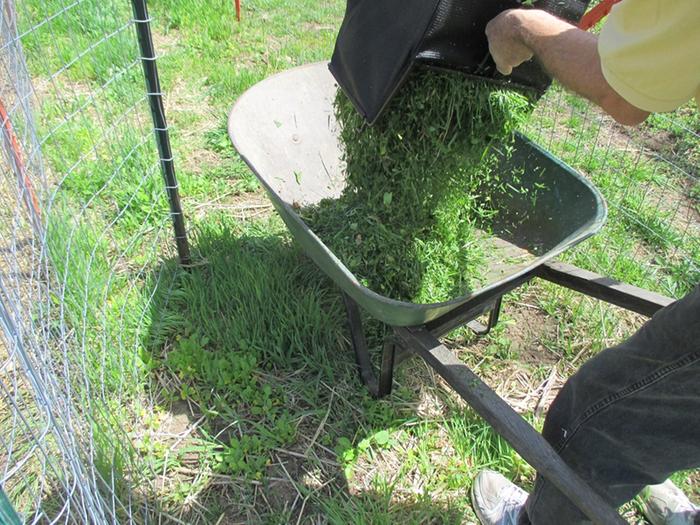 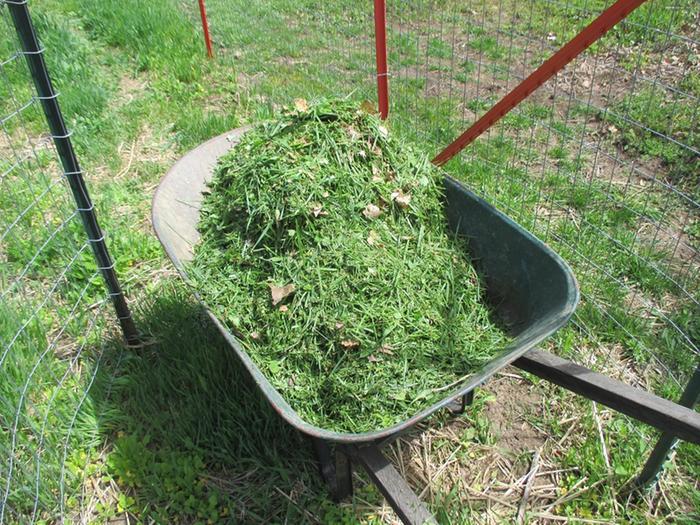 Judith Browning
Posts: 7422
Location: Ozarks zone 7 alluvial,black,deep clay/loam with few rocks, wonderful creek bottom!
1315
posted 3 years ago
Love the bagger and height adjustment on this mower. The bagger holds more than other baggers we've had and has a nice wide opening for emptying. The height adjustment is one lever, instead of each wheel separately and goes to a good five inches.
I just finished mowing the side yard (without the bagger) after letting it grow up in dutch clover and waiting for the crimson clover and some of the grasses to go to seed. It mowed great even though thick and slightly wet...had to charge up the battery a little more often but had plenty of power for the job.

Our neighbors all have riding mowers and are finally understanding that we don't need help nor do we want help to keep our property mowed. One neighbor keeps offering and the other mowed some of the clover I was letting get tall for mulch after dark one evening....he said he thought he was doing us a favor. We've never lived within anyone's view before...interesting.

Folks aren't picky about their lawns here, lots of dandelions, etc., but when they mow they mow really short.

Dale Hodgins
Posts: 9002
Location: Victoria British Columbia-Canada
666
posted 3 years ago
I tried to bag some really wet grass with lots of clover in it. This didn't go very well. It bunched up at the beginning of the bag. Now that the grass is much drier, the bagger works much better. I mulch almost all of the grass that I cut, since my customers have no use for the clippings. Mulching hogs power, but leaves a nice finished look.

Does your machine have headlights? I didn't think that the light would be of much use to me when I bought the machine. A few weeks later we had some really hot days. I cut my edges and drove Wildlife to the fringes during daylight, and finished at night. It was nice and cool and I was able to work with my shirt off. The headlight has also been used as a giant flashlight in the basement of a house that I worked on. The battery is good for hundreds of hours when used only for light. The headlight feature would be quite handy for anyone operating a landscaping business and transporting their goods in a covered trailer.

I'm glad I didn't go for the self-drive option. It turns out that most of the grass I cut is highly variable in length and density, so I would have to constantly be changing speed.

This customer gets me to mow an acre and a half, once a week. It usually takes about 5 hours at $45 an hour. So he spends $225 on his grass every week. I can't imagine that I would ever have such a financial priority, even if I were far wealthier. I met an elderly couple who keep three of their five acres in mown grass. They complained about the expense, but didn't seem willing to reduce the acreage or allow their neighbor to put sheep on it. 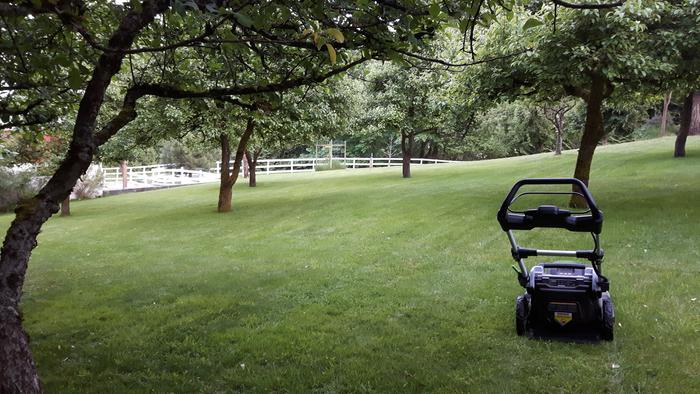 
Does your machine have headlights?


No headlight...I can see where it's handy for you...I can't see where we would use it as we are pretty much done for the night at dusk.

I think we'll be bagging every other mow...this time mowed as mulch to leave some seed to fill in the areas that had been mowed too short and only had some poor looking mouse ear chickweed...next time I'll bag and get the clover for the garden.

I could never use a gas mower again, there's nothing about one I'm missing.

posted 3 years ago
Thanks for bringing up the bagger! I have a huge patch of blackberries I want to weed away from some spruce trees and so far the most effective and effortless way to kill them off has been to dump grass clippings on them.
Judith Browning
Posts: 7422
Location: Ozarks zone 7 alluvial,black,deep clay/loam with few rocks, wonderful creek bottom!
1315
posted 3 years ago

I'm glad I didn't go for the self-drive option. It turns out that most of the grass I cut is highly variable in length and density, so I would have to constantly be changing speed.

That's what we were looking for originally and I'm glad we couldn't find one now. This isn't hard to push on this lawn...a few gradual slopes and some dippy places but no different than any push mower we've used. I was a little concerned when I saw that boxed up it weighed 80 pounds. I think some of that is the metal deck, which we wanted. It doesn't seem like it weighs that much pushing it around.

I really like that when done, I can remove the battery and push it up to the wall and lift the deck to store upright...at the same time I clean out all of the accumulated grass and add to the compost. It makes it easy to remember to do that before it turns to grass bricks under the deck.

Judith Browning
Posts: 7422
Location: Ozarks zone 7 alluvial,black,deep clay/loam with few rocks, wonderful creek bottom!
1315
posted 3 years ago
First fail....the charger went crazy on us making odd noises and readings, and not charging the batteries.  We called the company and they are sending a new one this week.  We are to have the old one boxed up and return when UPS delivers the new one.  I've never had a return happen that easily.  They did ask what was wrong but didn't argue or question it.

The mower has been working fine considering the lush grasses from this summers many rains.  It's hard to fit in a mow when it's dry enough.  We were down to a small patch left to mow when the charger quit, so after a few days our neighbor offered to mow it with his riding mower...he ended up mowing half the lot and very very short.  The difference is really dramatic...the other half mowed several times high by us is a lush green, the part he mowed is scalped and has clumpy bits of dead grass all over.

I can't wait to start planting fruit trees, etc. so that it isn't looked at as lawn by the neighbors who want to be 'helpful'.