I'm new to the forums, but having been reading through them I'm impressed with the expertise available. A couple of years ago I made a coffee can rocket stove that seemed to work well enough to heat a pot of soup to boiling. Having read how they burn wood more efficiently at higher heat, I thought, "That's what I need for Asian stir fries in the WOK." So, I set out to make a larger version to use on my deck utilizing what I thought were most of the same principles that seemed to work in the coffee can rocket stove.

CONSTRUCTION:
I've attached a few photos to help communicate the design. I used a galvanized steel garbage can for the shell. The riser pipe is 6" stove pipe, the bottom of which is capped off with the fitting for that purpose. The horizontal intake pipe (which actually inclines towards the center of the stove ever-so-slightly) is of steel. I don't know what kind of pipe it is but it came with an aluminum liner inside which I have removed in order to get more inner diameter. I fashioned a tray for holding the sticks in the upper chamber of the intake pipe from steel sheet metal which simply slides into the intake pipe.

I cut a hole in the stove pipe (riser) into which the horizontal intake pipe could be fit. The bottom - capped portion of the stove pipe riser is about 2/1/2 - 3" below the lower lip of the intake pipe. which creates an "ash catch basin."

I was concerned about the device tipping over either because of wind gusts or becoming top heavy with a WOK full of hot/sour soup sitting on it. Therefore, I sought to add some ballast which I accomplished by mixing some hypertufa (1:1 cement and pete-moss). I figured that since hypertufa is lighter than straight cement it is due to the pete-moss filler and so the hypertufa might have a better insulating effect than straight cement. I was trying to avoid a big heat sink. The base of the garbage can is filled with hypertufa which is about two inches thick. It comes up to just under where the horizontal intake pipe comes into the riser. I did use a small amount of the hypertufa to seal any gaps where the two pipes came together.

At the exit of the riser I measured, cut, and bent two inch wide tabs every other one either bending inward or outward, the result being two concentric circles consisting of five tabs each which serve as grates on which to rest pots, pans, or WOK of different sizes.

PERFORMANCE:
I consider this device to be a failure overall, but providing good opportunities to learn. To ignite the stove I wrapped several smaller sticks about the diameter of my fingers, each in several sheets of news paper and shoved them down the barrel of the riser. The fire quickly builds into an audible roaring fire as air is pulled into the intake pipe and jet-like flames shoot out the top. However, as the fuel in the vertical riser is consumed and used up, the sticks protruding in horizontally from the intake tube are insufficient to keep the fire going. I end up with glowing embers. On a particularly windy day, facing the intake pipe into the prevailing wind, a few prolonged gusts did reignite the glowing sticks into flames, but they quickly went back to glowing embers when the wind died down.

What I seem to have is a good incinerator. A lot of fuel in the vertical riser can cause enough draft to get it going. However, the main fuel sticks are insufficient to maintain any drafting, therefore, I don't consider this to be a workable rocket stove. As an added note, the hypertufa does heat up and maintains significant warmth hours after the fire goes out as the bottom of the garbage can is quite warm to the touch.

I would appreciate any insights the experts can offer about what I might have done right and where I went wrong. Thanks.
20160425_161247.jpg 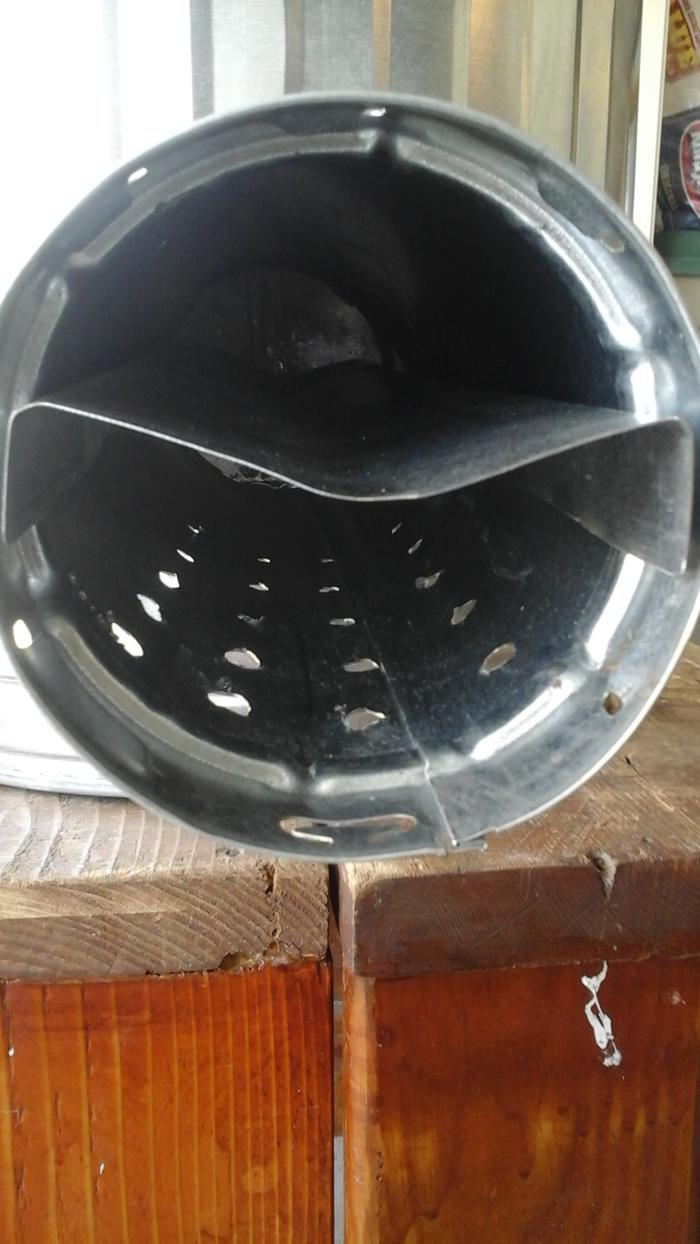 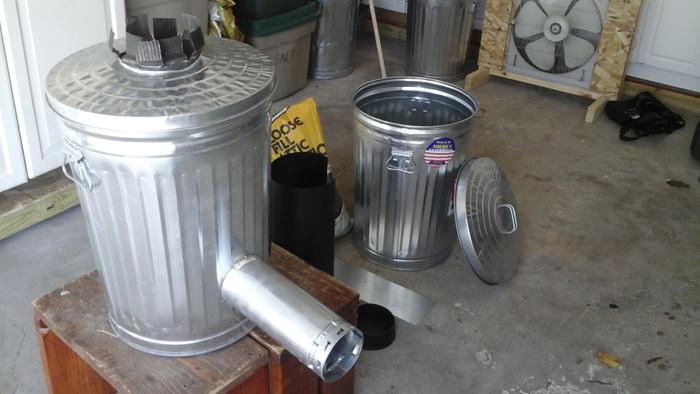 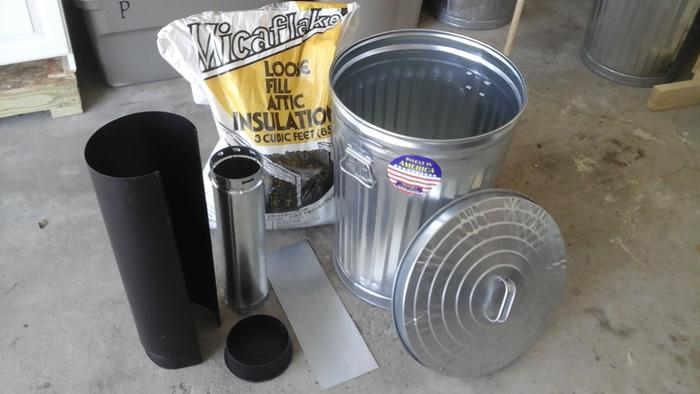 F Styles
Posts: 455
Location: climate zone 6b
3
posted 6 years ago
are you planning to build the whole thing out of metal?

Posts: 3958
Location: Upstate NY, zone 5
384
5
posted 6 years ago
You don't have space for much fuel in that horizontal pipe. You can reshape the insert so there is maybe 1/4 of the space for bottom air intake and 3/4 for fuel. That should allow you to get more concentrated heat buildup. How deep does the insert go? What space is there at the back end for air to mix with the fuel? An ashpit at the base of the riser is not going to be useful; if anything, I would run the horizontal an inch long, tee the riser into it, and keep a smooth bottom surface for pulling ashes out.

Your light metal setup is fine for testing, but as F Styles alludes to, once you get sustained hot fires, the lining will corrode at the hottest spots and collapse. Once you have worked out the layout kinks, you will want to encase the liner in an inch or two of fireproof insulating cement or clay mix.
Brian Van Dine
Posts: 7
Location: Glendale Heights, Illinois
1
posted 6 years ago
Thanks for the advice.

To answer your questions

You asked about the space in the back for fuel/air mixing. The horizontal pipe only protrudes into the riser about 1", so I'd say, given the riser is a 6" stove pipe that there is about 5" beyond the horizontal pipe. Is that too much space, perhaps?

I have considered the benefits of lining the metal with clay or something but I'm not sure what material to use? When you suggest a clay mix is it the ceramics clay like potters use or something different? Where does one purchase said material? Thanks.
Glenn Herbert
Rocket Scientist

Posts: 3958
Location: Upstate NY, zone 5
384
5
posted 6 years ago
The back end space is probably fine. What I said about the tee was basically swapping the horizontal and vertical pipes, so the horizontal has the full-length smooth bottom. But I wouldn't worry about changing it unless you decide to rebuild the whole thing. There is no reason to have the horizontal extend back further than the vertical, that was just referring to the assembly method you described.

You will get a lot of combustion air in between the sticks in the feed, unless you have smooth straight pieces of lumber stacked tightly together, so the bottom air supply is just an additional kicker. The more common problem is having too much air beyond what is needed for complete combustion, cooling the combustion zone and reducing the effectiveness of combustion.

There is a concept known as "the three T's", or Time, Temperature and Turbulence. The gases released from the fuel by the fire need to stay hot enough to burn, for long enough, with enough turbulent mixing for all of the gases to meet oxygen. So the combustion zone needs to be insulated, long enough for the fire to complete before it reaches the top, and shaped so that the contents mix thoroughly.


As for clay, you can use potter's clay if you have an easy source of that, but most any clayey subsoil dug out of your backyard will work. If it will hold its shape when worked with enough water to make a stiff mud, and have enough strength after drying to poke or handle without falling apart, it will probably work fine. You can get more detailed descriptions by searching for "how to identify clay soil".
Mason Jar Soil Test
Urban Farming: How to Determine Your Soil Type
HOW TO FIND AND DIG CLAY

I would not advise trying to line the metal pipes with clay, but wrap the clay all around them. Making cob (clay mixed with short pieces of straw - dried grass cuttings work beautifully for this application) will make it easier to wrap the pipes. You can mix some perlite or vermiculite with the cob to improve the insulation, but the inner surface wants to be clay-rich for dried strength. Then surround this core with plenty of insulation.
Brian Van Dine
Posts: 7
Location: Glendale Heights, Illinois
1
posted 6 years ago
Thank you for this great info! It sounds like my initial build is salvageable at least and now I am more aware of key concepts for my next build attempt.