Dale Hodgins
Posts: 9002
Location: Victoria British Columbia-Canada
700
posted 6 years ago
This dishwasher is not a water saving device. I have no shortage of water, and water that goes through a dishwasher is not lost to me. It pours back into the pond that it was pumped from. Dishwashers are meant to save time and fuss. In order to really save time, it would have to be automated like the store bought variety. A device that requires you to manually switch cycles, is more of an experiment.
-----
I like to invent a new type of dishwasher at least once a year. As with most of them, this one currently exists only in my head. This one uses no electricity, but the water gets blasted around just the same.

It's based on a steam injector and a pressure cooker. A steam injector is basically the same thing as a jet pump. When a fluid or gas is passed through another one at high speed, a vacuum is created, which sucks a bunch of the stationary fluid along for the ride. Wikipedia knows all about it.

Water gets blasted from this reservoir, to the nozzle or nozzles which spray water around the dishwasher. The water settles back into the pan, through drain holes in the bottom of the dishwasher. The pan can have a deeper section, which I will call the well. Heavier dirt and food particles will collect in this spot. The drain pipe is at the bottom of the deeper section. Debris could also be caught in a strainer basket. It would be a wire mesh tray roughly the shape of a cookie sheet. It would have to be cleaned regularly, just as the lint screen for a dryer must be cleaned.

The jets which spread the water around, must be large enough that they don't become clogged with food waste. A preliminary cold water rinse , could precede the wash cycle, which continually uses the same water. Water from the cold water rinse would be run down the drain along with the food waste that it contains.

Most dishwashers use only water and some detergent as the working fluid. I have tried to figure out something that would work as a washcloth, to give the water some abrasive quality. The simplest and most inexpensive thing I could think of, is used coffee grounds. They are only slightly heavier than water and are easily moved through small pipes, without clogging them. The jets must be several times the size of the coffee grounds.

The dishwasher has 3 or 4 Cycles .

The first cycle is the initial rinse, which gets rid of all of the larger particles. No soap is used during this process.

The second cycle uses soap, and is the wash cycle. The water can be hot or warm.

The third cycle is the rinse. It can be hot or cold. If using a cold rinse, the dishwasher must sit for a while, in order to prevent temperature shock from breaking delicate items.

I have no shortage of water, so would allow all rinse water to run down the drain. Those who are short of water, may want to fill the wash pan and recycle the rinse water.

The fourth, optional cycle would be steam drying. Since we're attached to a pressure cooker, it would be quite simple to drain the lower pan and allow steam to be injected directly into the dishwasher. If done after a Hot Water Rinse, there shouldn't be much risk of heat shock. This would completely sterilize the dishes.

In my situation, with unlimited, relatively clean, pond water , I might try only two cycles. A long rinse with nothing but cold pond water, will get rid of most dirt. If this were followed by steam drying, the dishes should become very clean without any soap at all. My experiments with the fishwasher/dishwasher, proved to me that pond water alone does a pretty good job without soap.

A steam cycle should satisfy even the most germophobic fuddy duddy.
.....
I'm going to keep my eyes open for a really good quality dishwasher that has died. Quite often there are dishwashers with stainless steel insides and good quality racks, that are given away because the heating elements, pumps or other expensive components have failed. All this unit requires is a good watertight box with racks inside. Free dishwashers are advertised every day on Used  Victoria.
396px-Ejector_or_Injector.png 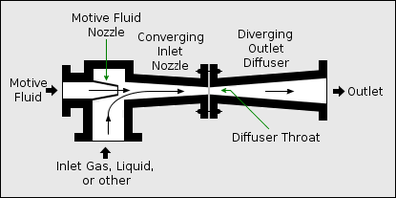 posted 6 years ago
Something like a 20 quart pressure canner would probably work quite well for the pressure part. You can fill them up to 2/3 full so that's about 12 quarts of water in the chamber.

I think you'd probably want some kind of heat damping on the rocket stove, though - as far as I'm aware most pressure canners can't be used on anything hotter than a regular gas or electric stove, lest the bottom melts. I know my Presto model says not to use it on a turkey burner (whatever that is) because of the melting possibility.

Depending on how clean the water you're using is, it wouldn't be too hard to add a small filter somewhere up the line to take care of larger particles before they join the bits of food and plate gunk.

posted 6 years ago
Dale, I always like reading what you come up with.  I showed this idea to Ernie, who likes it a lot.

Phoenix - the top of a regular rocket mass heater (with thermal mass bench) tends to get hot enough to simmer a pot, not boil it.  Might not be hot enough for this purpose.
A rocket stove without the mass can be designed to boil water faster.  The right configuration for a pressure cooker might take some testing and fiddling, but it should be do-able.  (Setting up the pressure canner rocket stove in an outdoor kitchen, for actual canning, could be a useful preliminary experiment.)  My gut would be that if you use a non-pressurized pot to time how long it takes to boil a couple gallons of water, and compare with an "ordinary" stove, you could get pretty close to the right size system for putting the right amount of heat under the canner.
In any case you would not be putting water or steam at any temperature into the hottest part of the firebox, otherwise it would not be a rocket stove any more (it would be a smoke/creosote distiller). Excessive temperature under the pressure canner might or might not be a secondary problem, only if the fire would somehow maintain combustion temperatures hot enough to cause that problem.

I'm more excited about the option to steam-sterilize than any other part of this design.  A reliable, efficient autoclave could allow medical facilities to sterilize equipment without external power sources, which puts this in the realm of lifesaving rather than just convenience.  It would also be a huge asset that could potentially allow an off-grid homestead to operate a legal commercial kitchen facility.  (Dish sanitization is one of the major components, reliable water and refrigeration would be the other big ones to solve.)

I've lived without mechanical dish-washing, and without laundry washing, and for my money I'd get a laundry washer and skip the dishwasher.  Seen too many clogs and floods to think of them as "simple" conveniences.  They change the job to loading, emptying, and contraption maintenance instead of washing, but I'm not sure how much actual time or resources they save.  Acknowledging that sometimes contraption maintenance is way more fun than doing the dishes.