I am just about finishing my Rocket Stove Mass heater for my garden house.

I have done 3 test runs the last three days.

It has a very good draft as I have a professional build chimney at the end.

After a few hours running the thermal mass gets heated up.
My problem is, that the barrel does not get hot. At least not nearly as hot as it should. I can touch it even at the top after 2 or 3 hours burning.

I suspect the heatriser. And I think that there is no second burn of the woodgasses at the top of the barrel.

Is there a chance to solve the problem by enlarging the heatriser by a few inches?
How big should be the gap between the barrel and the riser at the top? I am using a standard oil barrel.

I could try to shorten the gap between the top of the barrel or to enlarge both barrel and heatriser. I also read in another thread, that clay is no good option for the heatriser...
Should it be something, that warms up more quickly?

The color of the exhaust gasses form the chimney is white.
I guess it should be colorless, if there was a burn of the woodgasses, should it be?

A second possibility could be the wood. I am using what I got from my garden. Mostly sticks and branches from appletrees 2 or 3 season earlier dried out.
Maybe they do not have enough energy to start up the the second burn.

Thanks a lot for your advice!

Martin (Germany)
Martin Doering
Posts: 8
posted 4 years ago
Ok, after using different wood, the barrel reaches acceptable heat.
Obviously my applewood and branches contain more moisture than I hoped for. And bigger pieces need to be splattered before burning.

I guess it is a matter of balancing size of burnchamber, amount of thermal mass and the size of the room and isolation.

I guess for more heat from the barrel, I would need a bigger burnchamber and bigger heatriser diameter. Or construct a higher barrel to radiate more heat.
For the barrel reaching its maximum temperature quicker, something other than bricks and clay as heatriser may heat up more quickly.

I am just not sure if the woodgases should burn at the barrel top.
I got the impression from youtube videos, where the noise sounded like bangs on the barrel top.

I have just the sound from a hot burn in the burnchamber.
Satamax Antone
gardener

Posts: 3450
Location: Southern alps, on the French side of the french /italian border 5000ft elevation
177
posted 4 years ago
First, please stop trusting YouTube. There is too much untrustworthy crap there.

Secondly, pics and dimensions would be nice to help troubleshooting . Not just an evasive description.

Posts: 3666
Location: Upstate NY, zone 5
253
4
posted 4 years ago
Applewood branches will give plenty of heat if they are fully dry. There could be a difficulty getting enough branch wood in the feed at a time if it is very twiggy as apple can be. You would want to trim straggling twigs off so the branches can pack together. Splitting wood that is big enough to split will help it dry faster, but you can effectively burn wood that is large enough that only four or five pieces fit in the feed at once.

Smaller clearance between top of riser and top of barrel will give more concentrated heat at the top, but it will not increase the overall heat output.

We do need details of your system size, dimensions and layout before we can give better advice.
Martin Doering
Posts: 8
posted 4 years ago
Ok, after experimenting and measuring and using different wood, I come to the conlusion:

Applewood is fine. It is only a pain feeding in adequate amounts.
But used to start the burn and increase the burn temperature of other wood like old planks it is really usefull.

I realize that I have a burnchamber 14cm / 5.5 inch square a heatriser maybe 13cm / 5.1 square and exhaused pipes 16cm / 6.1 diameter round.
The heat generated in the burnchamber is simply not enough to heat the termal mass quickly.

The massive heat riser takes a lot of heat to warm up in the beginning as well. So it takes a while until the radiating heat reaches it peak.

After 5-6 hours running the gardenhouse is comfortable warm.
The draw is pretty strong and I have most of the time a rocket effect.

I guess, if I want to have more heat, I will need a bigger burnchamber and be burning more wood.

Or try to enlarge the opening to the exhaused pipe in the hope that it may improve the draw henche burn more wood in the recent chamber.
Also a seperate air intake may enhance performace, as I noticed that with an open door or window the rocket effect seems stronger, especially after a few hours burning.

I was a bid confused, because I thought, there was not only a rocket effect in the burnchamber but the hot gasses burning again at the top of the barrel.
Byron Campbell
Posts: 270
Location: US, East Tennessee
24
posted 4 years ago
Hi Martin, your barrel's top should be to hot to touch after just a few minutes to ten minutes of fire burning, from a cold start. The top gap (heat riser to barrel's top surface) can be in the range of 2 to 3 inches (for heaters) and no less than 1.5 inches (for cooking on top of the barrel).

Some additional info. about your heat riser would be helpful:

What is the construction material of the heat riser?

What is the insulation material around the exterior diameter of the heat riser?

What is the construction and measurements of the exhaust transition chamber leading from the barrel to horizontal heat exchange ducting? Photos?


Martin Doering wrote:
The heat generated in the burnchamber is simply not enough to heat the termal mass quickly.

Martin Doering wrote:
After 5-6 hours running the gardenhouse is comfortable warm.
The draw is pretty strong and I have most of the time a rocket effect.
.


If you have a nice roaring dragon in your greenhouse, then you have done it right.


Martin Doering wrote:
I guess, if I want to have more heat, I will need a bigger burn chamber and be burning more wood.

Or try to enlarge the opening to the exhausted pipe in the hope that it may improve the draw hence burn more wood in the recent chamber.
Also a separate air intake may enhance performance, as I noticed that with an open door or window the rocket effect seems stronger, especially after a few hours burning.


If you want more heat, I would suggest building an 8 inch or 10 inch RMH - and maybe add an inch or two of mass around the "mass" to hold that extra heat . . . keeping in mind, that you have too have the same size of piping/burn chamber thru out the entire stove - to keep the dragon roaring .. .

You have stated that "The draw is pretty strong and I have most of the time a rocket effect." - which for me says its working . . . . I would guess, that if you were too enlarge the opening it would create an unbalance in the system - for example . . .  if you were too add a separate air intake, it may reduce the draw to such extent that you would have smoke come up in between the wood and into the room....

EDIT :  I think I misunderstood that last part, if you open a window or door in your greenhouse , and the stove rockets better, than yes, you need to add an air intake from the outside of your greenhouse directly above the wood intake - in such a way, that you can shut it off when you cap the stove for the night - if it is left open you will get a loop effect - which will keep drawing in cold air and exhausting warm air up the chimney until the entire stove is cold. - which is bad . .

I was a bid confused, because I thought, there was not only a rocket effect in the burn chamber but the hot gasses burning again at the top of the barrel.

I thought the same thing, when I built my stove, and when my barrel would not get hot enough, I raised the barrel the width of 1 brick on its side (see pic)  . . .  from what I know now, if you drop the barrel too low, you won't get a good draw / pinching off the flow of gasses ( you have good draw so that's not it ) . . .  I think I heard somewhere, that if you get it just right, you get a nice hot reburn at the top of the barrel, and if you raise it a bit higher, it moves the re burn down the sides of the barrel - getting less radiant heat from the barrel, and more heat into the mass . .  If you have an infrared thermometer, you can measure the temps at the top and sides of the barrel, to get an idea of where the "hot spot" is . . .

This is just my opinion, if in error, please feel free too correct me ! 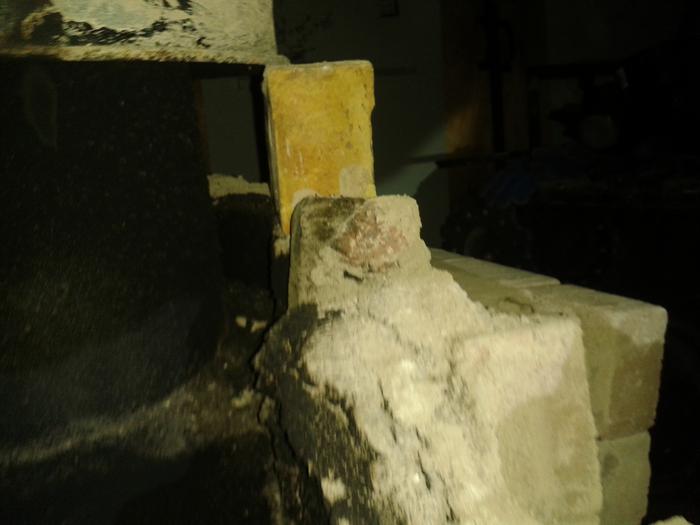 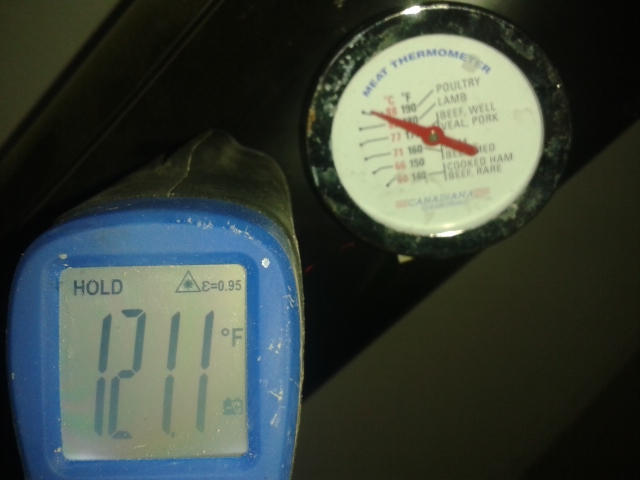 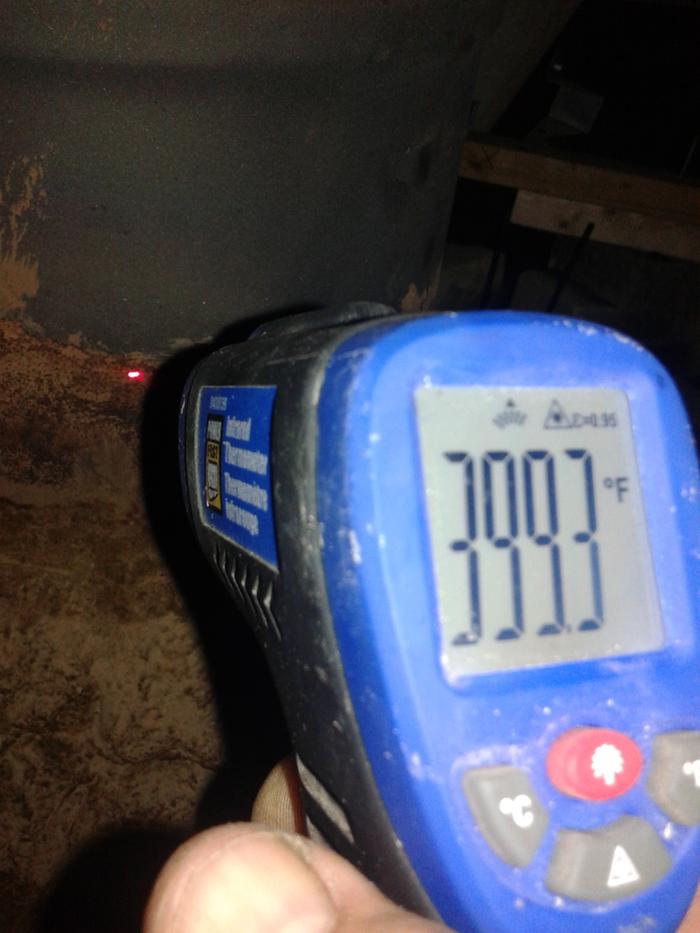 Martin Doering
Posts: 8
posted 4 years ago
I solved the Problem:

It was the size of the exit from the heatrizer.

I enlarged it as much as possible and the temperatures of the barrel increased. And the barrel top gets over 100 degree C right away.
Usually it is at about 150-170 C in a range between 110 and 225 C meassured by a cheap chinese lasor thermometer.

Also a factor may have been, that there was a lot of half dried cob on the heater that generated a lot of wapor while drying which may have effected the burn.
After most of it dried the heater got a little warmer than before.

Also it may have been a bid finding out the best way to stick the wood and reach best temperatures. Which took a bit of try and error.
When I am burning old wood planks, I find it best to mix it with wood from apple trees. Because those branches burn hotter and get to coal earlier thus improving the burn.

I am totally satisfied with what I have now.
Thanks for everyone who answered.